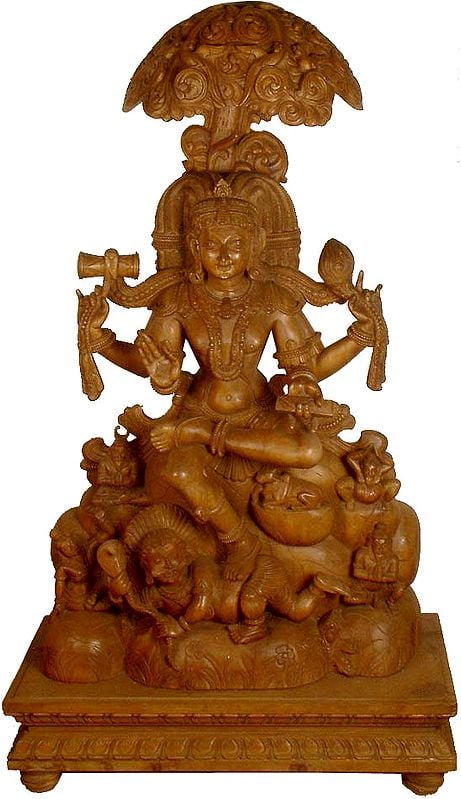 More than 1M+ customers worldwide
This large wood statue carved out of Vangai wood, a fine timber from Kalakorchi region in Tamilnadu used for wood-carving now for centuries, represents Lord Shiva as seated with his left leg placed over his right thigh, and the right, placed over the back of the Apasmarapurusha lying under his feet. In Indian tradition the posture is known as Lalitasana – that which revealed ease and aesthetic beauty. The form of Shiva that this statue represents is identified in Shaivite iconography as his Dakshinamurti manifestation. The term Dakshinamurti combines two Sanskrit terms, one 'Dakshin', meaning the supreme master or expert in any of the disciplines, and the other, 'Murti', meaning form, that is, Dakshinamurti is the form of one who is at the top of any skill or discipline and is its supreme master.

This form of Shiva combines attributes of four major Dakshinamurti forms. He has been represented as holding his usual drum in his right upper hand, and a lotus, in his left, both symbolical of his Pushkara Dakshinamurti form. Shiva as drummer reveals gaiety, and the lotus represents aesthetic beauty, both the aspects of Pushkara Dakshinamurti. Shiva’s mount, Nandi, is delightfully couched on a basket-like moulded lotus – a further extension of the Pushkara Dakshinamurti iconography. The scripture held in his lower left hand denotes knowledge and hence his Jnana Dakshinamurti form, and the ‘vyakhyana-mudra’ – interpretive gesture of his lower right hand, his Vyakhyana Dakshinamurti form. Installed on a pedestal symbolic of a mountain and with one leg positioned as in meditation the image is in semi-yogic posture. More significantly, four of his disciples engaged in yogic practices around his seat suggest that Shiva is their Yoga-guru and master Yogi. One of the disciples on his right has horn on his head. This iconography suggests Shiva’s tribal and pre-Vedic links. The Apasmarapurusha is characteristic feature of Shiva’s Nataraja iconography. Here it suggests Shiva’s accomplishment as Yogic master who having subdued inertness symbolised by Apasmarapurusha in this representation has kindled his inherent spiritual energy by Yoga.

Click here to view a high resolution image of the sculpture (2.7 MB).