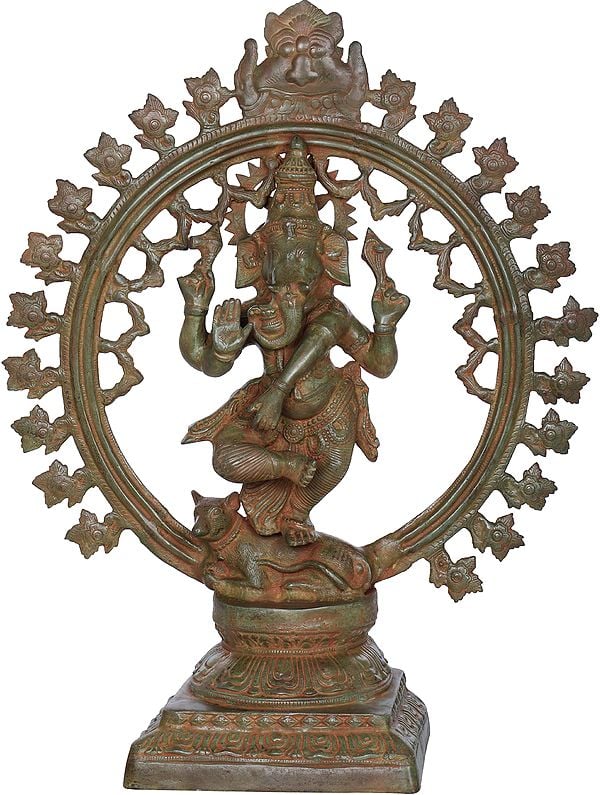 This sculpture is sculpted keeping in view the patronage of Lord Shiva, just like Shiva’s cosmic dancer (Nataraja) form, Lord Ganesha (Shiva’s son) is seen as dancing in vigour with left leg on mouse (his sacred vehicle) and right bent in a 90 degree angle. The mouse sits on the lotus pedestal which is kept inverted on a three-layered stand, carved in absolute fineness and beauty. Chaturbhuja has his anterior hands postured in the Nataraja mudra unlike his usual iconography and rear hands carrying the iconic implements- Noose and Pasa.

Ganesha’s stance and sharpness displays his exuberance, focussing attention towards his slender body inspite of having a portly figure. The multiple pleated dhoti that he wears is fashioned in a flowy and luxurious manner with the traditional long kamarband enhancing its charm. Zoom in to appreciate the natural texture of mouse’ body identifying it as a hairy type; ornamented in graceful jewels and the long multiple layered sun haloed crown is inspired by the great South Indian temple carvings.

Having a lavishly carved and striated trunk in valampuri pose, large ornamented ears in horizontal lines and the tilak on forehead reminding us of Shiva’s third eye, are some of the minutest briefings on which the carver has paid keen attention. Ganesha is framed here in a double layered Kirtimukha ring which is surrounded by mesmerizing flowers signifying his love and a colorful aura, unlike Shiva’s ferocious ring of flames; inner edge is decorated with leaves joining together to form small temple tops in the upper half. Not only the distinctive structure, but also its magnified size is an eye-catcher for the viewer.