€756.50
Usually ships in 10 days
Notify me when this item is available
Save to Wishlist Send as E-card Share by Email
This excellent statue of Lord Buddha absorbed in deep meditation is unparalleled in its quality, elegance, stylistic versatility and spiritual fervour. It is cast in brass but is so well anodized to create copper effect that only an expert eye would detect that it is not copper. The spiritual fervour that this Buddha image is endowed with, is a divine phenomenon, which characteristic Buddhist images inherited from a long prevailed tradition of spiritual thought. In these images, as also in this one, there reveals the real face of the Buddha, the supreme spiritual being. One school of Buddhist thought claims that the Buddha's images inherited this spiritual character from Lord Buddha himself, as once, when in his absence king Udayana commissioned his image and showed it to him on his return, the great Master preached how a Buddha image be sculpted. The other school does not accept that the Buddha's images came into being in the Buddha's lifetime. However, it far more expressly acclaimed that an image of the Master was expected to depict him beyond mere physical features  'the picture that is not in colours'. What decisively influenced Buddha's iconography and realism of his images is the total ethos of Buddhism. It perceives Buddha  the Enlightened one, as Dharma-kaya, law-incarnate, and not as jeeva-kaya, physical being. Obviously, the class Buddha images, as this one exemplifies, are the representation of Dharma-kaya Buddha and not of mere physicality.

Lord Buddha, the founder of the Buddhism and one of the few great universal teachers the history has ever produced, is seated with his legs crossing each other and feet and palms turned upwards. Lotus petals-like tender and crimson feet and palms of Buddha have the appearance of a semi-sprouted lotus. Hence, in spiritual iconography, this sitting posture has been conventionalised as padmasana. In Buddhist and Jain iconography padmasana corresponds to meditation, as the padmasana images of Lord Buddha, and those of Jain Tirthankaras, essentially represent them as absorbed in meditation. In Jain iconography, the meditating Tirthankaras are rendered also in khadagasana, standing posture, but standing images of Buddha, though they have meditative demeanour, are not seen as revealing meditation. The oval shaped lotus base further enhances the effect that padmasana posture creates.

This padmasana image, facial demeanour and half-shut eyes, represent him as deeply engrossed in inner dialogue  seeking answers to questions relating self and cosmos. In Buddhist iconographic classification, this posture of Buddha in dhyana, meditation, is seen as the Dhyani Buddha, and comprises one of the essential five classes of the Buddha's sanctum images, the other ones being Buddha in bhumisparsha-mudra, in Dharmapravartana-mudra, as the universal teacher and the Buddha's nirvana. Buddha in meditation depicts his pre-Enlightenment stage, when seated in padmasana under a Banyan tree near village Uruvila around river Nairanjana he descended deep within him and discovered the light and was the Enlightened One. The first three of these postures are seated, fourth standing and fifth reclining.

This metal cast is a unique blend of styles. It borrows its basic model from the early Indian tradition, costume from Nalanda, facial features from Sarnath, coiffure from Mathura and over-all grandeur from Tibetan images. Serenity and divine composure enshrining its face aptly define the Buddha in his divine bearings. The intrinsic aspect is so strong that forms seem to swell from within. The image is as powerful in modeling and plasticity. The contours flow from shoulders to feet in smooth and uninterrupted measures. It is so well balanced between spiritual and sensual, and strength and grace. 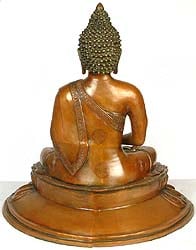