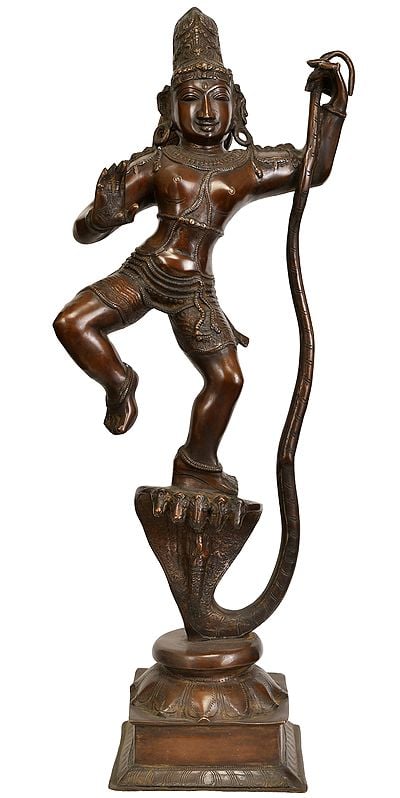 The story of Lord Krishna and serpent Kaliya is one of the most popular mythological stories in Hinduism. The dreaded venomous multi hooded serpent Kaliya symbolizes the numerous desires we have. One day Krishna was playing with his friends near Kaliya’s abode (waters of Yamuna in Vrindavan) and their ball fell in the river, so to catch the ball Krishna jumped into the river even after being warned about the poisonous snake. Kaliya being unaware of Krishna’s real identity, attacked him with his fangs and tried to tire his body around Krishna attempting to crush him, but the lord was too fast for him, he caught hold of the serpent’s tail and dragged him to the river surface, playing his flute on its head.

This brass sculpture is a clear depiction of this story, where Kaliya’s head is being subdued by Lord Krishna’s left foot such that the weight of the whole universe is in his feet and he is dancing on the serpent’s head in amusement not releasing his hold on the tail. The sculptor has very efficiently and neatly carved this statue, giving justice to this mythological act.

Krishna is adorned in a layered short dhoti tied below his navel and is ornated with lustrous jewels that complement with the long South Indian styled crown. His face features are chiselled in a precise and accurate manner, with that smile on his lips signifying his success on capturing the deadly serpent and making him move back to Ramanaka Dwipa (his original abode), thus saving the life of people of Vrindavan. We provide you with two color variants of this large statue- usual natural brass shade and the other in a dark cocoa color. This sculpture of Krishna taming Kaliya, rests on an inverted lotus pedestal which is kept on a thick square shaped base.