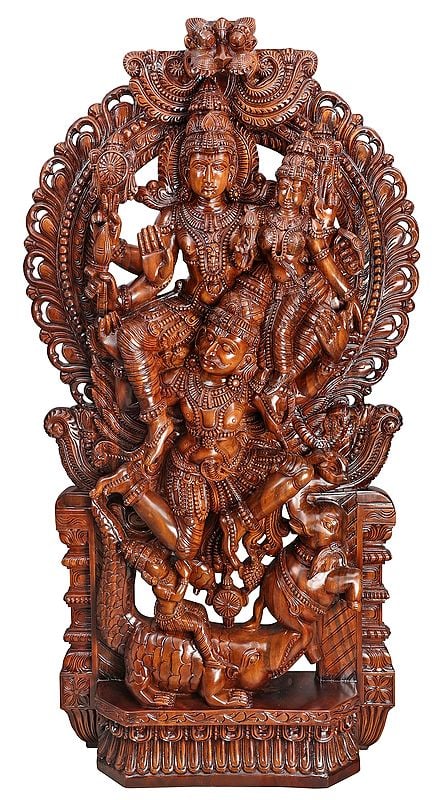 The rarest of all, this Gajendra Moksha sculpture is inspired from the sacred book of Hinduism, Bhagavata Purana and is explained as ‘Liberation of Gajendra’. The superfine carvings and structures of this wooden Gajendra Moksha sculpture are taken from the antique patterns of South Indian temples. Gajendra was an elephant king who was offering flowers to Lord Vishnu near the lake and was attacked by a crocodile, who held him by his leg and even after much hard work, Gajendra could not rescue himself from the clutches of the crocodile. So, to protect his devotee, Lord Vishnu came down to earth and hence Gajendra achieved moksha, or liberation from the cycle of birth and death.

This wooden sculpture depicts this episode by its beautiful carvings where Gajendra, the elephant can be seen groaning in pain at the bottom as the large crocodile (makar) has held his leg tightly. Seeing this pain, Lord Vishnu along with his consort, Parvati on his laps can be seen ascending down on earth on Vishnu’s vahana, Lord Garuda. The facial features of all the three deities reflect their innate natures effectively; ornated in rich multi-layered crowns having been carved like the long South Indian temple styles and the awe-struck jewels that charmingly comply with their royal garbs, the sculptor has showcased his expertise and the quest for perfection, in this beautiful work of art.

The pedestal has its designs from the floral patterns and the large Kirtimukha topped aureole is charmingly sculpted in multiple layers of varied designs having the outermost one in large flower petals. The bright glow and dual color tone of this marvellous wood quality, enhances the solidarity and beauty of this Gajendra Moksha statue furthermore.

How to care for Wood Statues?

Wood is extensively used in sculpting especially in countries like China, Germany, and Japan. One feature that makes the wood extremely suitable for making statues and sculptures is that it is light and can take very fine detail. It is easier for artists to work with wood than with other materials such as metal or stone. Both hardwoods, as well as softwood, are used for making sculptures. Wood is mainly used for indoor sculptures because it is not as durable as stone. Changes in weather cause wooden sculptures to split or be attacked by insects or fungus. The principal woods for making sculptures and statues are cedar, pine, walnut, oak, and mahogany. The most common technique that sculptors use to make sculptures out of wood is carving with a chisel and a mallet. Since wooden statues are prone to damage, fire, and rot, they require proper care and maintenance.

It is extremely important to preserve and protect wooden sculptures with proper care. A little carelessness and negligence can lead to their decay, resulting in losing all their beauty and strength. Therefore, a regular clean-up of the sculptures is a must to prolong their age and to maintain their shine and luster.