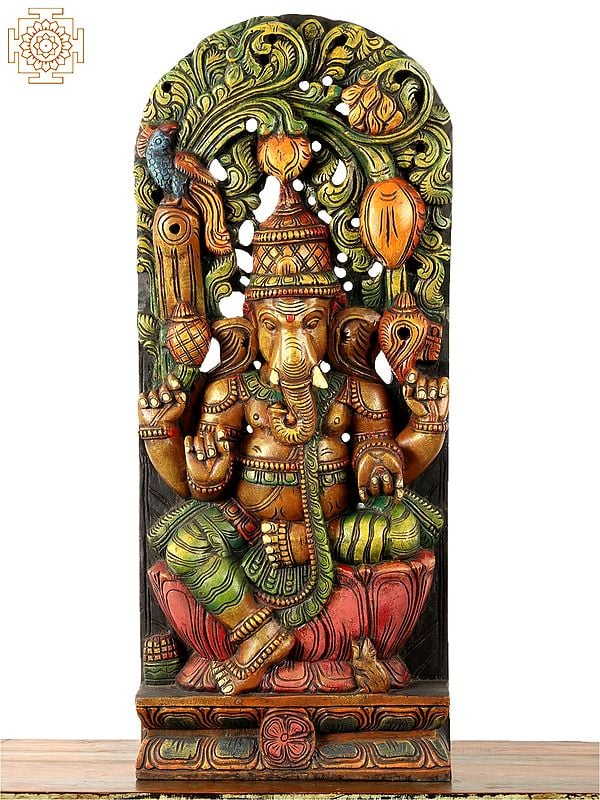 More than 1M+ customers worldwide
This wood statue, carved out of a piece of fine timber revealing minute details of figure and entire ambience that Prabhavali defines, and painted as elegantly and beautifully using lighter tints of various colours, mainly golden yellow, green, red and blue, represents the elephant god Lord Ganesha seated on a large lotus. The statue combines at least three of the thirty-two forms of his image as identified in early classical iconographic traditions enshrining different Ganesha related texts to include in particular the eighth century Mudgala Purana, the most authentic work on Ganesha. Besides illustrating various Ganesha-related myths and iconographic details of each form, the Mudgala Purana also explores the dimensional breadth of each of these forms, its meaning and the role it plays in human life, especially the aspect of life that it influences. Triply auspicious and powerful this statue synthesizes three significant aspects of his image, namely, Ekadanta, Vijay Ganapati and Sankatahara Ganapati, Ekadanta, relating to his one-tusked form, Vijay Ganapati, to his all-conquering power, and Sankatahara Ganapati, to his ability to redeem from a crisis.

Apart a number of myths narrating how his one tusk broke, such as one relating to punishing the arrogant moon for its mischief by removing it and missile-like hurling it on it, removing it for taking from the great sage Vyasa uninterrupted dictation of the great epic Mahabharata, or losing it while holding on it the blow of the battle-axe that variously his father Lord Shiva, or the great Brahmin warrior Parasurama inflicted on him, Ekadanta, his one-tusked form highly venerated in devotional tradition, is primarily a manifestation by appearance. A four-armed figure Ekadanta is pot bellied and carries in normal right hand his broken tusk. Whatever the focus on appearance, Ekadanta form has as strong symbolic thrust. Ekadanta stands for optimum sacrifice, singleness of mind and unparalleled resourcefulness. The pot-belly is believed to contain oceans of knowledge and with his large penetrating trunk he is believed to explore womb of the earth, unfathomable depth of oceans, and inaccessible regions of the sky and bring from there hidden treasures for his devotees.

The image of Lord Ganesha that the statue represents abounds in exceptional beauty, great divine aura, gold-like lustre and great energy and vigour, the attributes of all-conquering Vijay Ganapati. The most accomplished Vijay Ganapati is the Lord of victory who bestows success and every kind of bliss. In consideration of his wider role the Vijay Ganapati images often assimilate other forms of Lord Ganesha, mainly, Vakratunda, one with curved trunk, and Lambodara, pot-bellied. Vakratunda is known for a firm hold, and Lambodara, for stores of riches and knowledge, the aspects that Vijay Ganapati most needs. In effect Vijay Ganapati is Vighnesha and is required to redeem his devotees from every crisis and this aspect he inherits from the elephant god’s Sankatahara Ganapati form. The lotus seat is the essence of Sankatahara Ganapati iconography. Seated and thus covering the lotus in full he is seen as pervading the entire cosmos and guarding it against everything untoward. Obviously, the statue assimilates three forms, though it is on his Vijay Ganapati form that the iconography and anatomy of the image centre.

As in this image, all three forms that this image combines, Ekadanta, Vijay Ganapati and Sankatahara Ganapati, are four-armed forms carrying in two of them elephant goad and noose, in the third, some eatable, a golden mango, laddu or a bowl of pudding, and in the fourth, Ekadanta and Vijay Ganapati carry the broken tusk. Besides goad, noose and broken tusk this image carries in the fourth a golden mango, and in his trunk, a laddu. Corresponding to the body-colour of Vijay Ganapati the statue has been painted in gold mixed with red imparting to it extra lustre. Texts and traditions define his seating posture, with right leg laid suspending earth-wards, and the left, horizontally in semi-yogic posture, as ‘lalitasana’, a posture revealing great aesthetic beauty and majesty. The image enshrines a Prabhavali consisting of a stylized upwards rising flowering creeper supported on two parallel columns terminating into a rounded apex. Besides leaves, flower and fruit forms it also assimilates birds – parrots, and monkeys, all conjointly symbolizing the cosmos that Lord Ganapati pervades by his presence.

How to care for Wood Statues?

Wood is extensively used in sculpting especially in countries like China, Germany, and Japan. One feature that makes the wood extremely suitable for making statues and sculptures is that it is light and can take very fine detail. It is easier for artists to work with wood than with other materials such as metal or stone. Both hardwoods, as well as softwood, are used for making sculptures. Wood is mainly used for indoor sculptures because it is not as durable as stone. Changes in weather cause wooden sculptures to split or be attacked by insects or fungus. The principal woods for making sculptures and statues are cedar, pine, walnut, oak, and mahogany. The most common technique that sculptors use to make sculptures out of wood is carving with a chisel and a mallet. Since wooden statues are prone to damage, fire, and rot, they require proper care and maintenance.

It is extremely important to preserve and protect wooden sculptures with proper care. A little carelessness and negligence can lead to their decay, resulting in losing all their beauty and strength. Therefore, a regular clean-up of the sculptures is a must to prolong their age and to maintain their shine and luster.