A Movement Frozen in Time 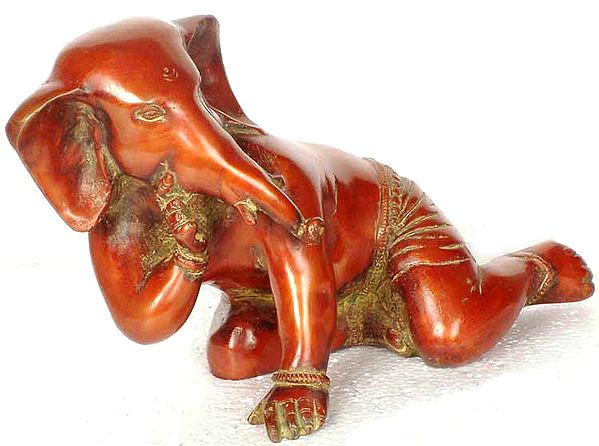 $195.00
Usually ships in 10 days
Notify me when this item is available
Save to Wishlist Send as E-card Share by Email
The Shaiva Tantras and the Agamas contain whole sections devoted to Ganapati where he figures as an independent god. He is talked of having numerous forms which are not found in the Mahapuranas and therefore, appear to have evolved within the framework of Shaivism mainly in the Tamil region.

Ganesha here appears in his form as Balaganapati. As such, he fulfils the role of son of Shiva and Parvati. The baby Ganapati suddenly stops in his movement of crawling, turns back and looks at something in amazement. The movement, as it ceases, is frozen in this metal sculpture. His elephantine head has large ears like the winnow baskets. His trunk is short and stout and the two tusks are as yet intact. He wears a short loin cloth, bracelets and anklets. The limbs capture the chubbiness of an infant's body. Even when Ganesha is represented in mature forms, his body remains child like, never growing into the full youthful stage.

As an infant, Ganapati was most attached to his mother Parvati and lot is said about the mother- son relationship. Parvati doted on her son as she was his sole creator. In this brass sculpture which looks most attractive with a red patina, Bala Ganapati's posture is reminiscent of Bala-Gopala (Baby-Krishna).