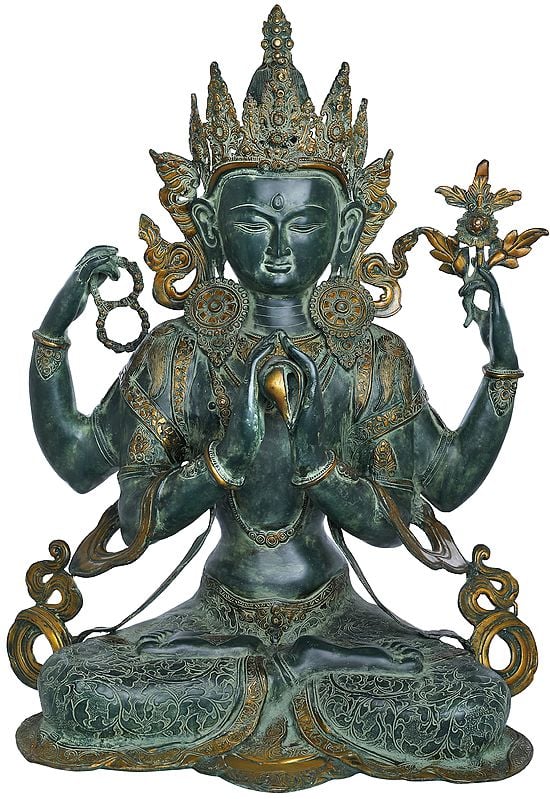 FREE Delivery
Only 1 available
$1925
A magnificent seated sculpture of the Bodhisattva Shadakshari Lokeshvara. The Sanskrt name translates to the lord and master (‘ishvara’) of the realm of existence (‘loka’), possessed of (‘ari’) a hundred (‘shada’) organs of vision (‘akshari’). And the Bodhisattva’s infinitude of vision and compassion endear Him to ihalokiya devotees, because He sees through their sorrows and nourishes them with what they most need.

A deep, coppery finish overlain with strategic proportions of gold. Sculpted from pure brass, this murti depicts the Bodhisattva Shadakshari Lokeshvara in padmasana, the hems of His dhoti spread about His gathered legs. The same is tied below the navel, situated in a narrow waist leading superbly up to broad shoulders and a neck as gracious as a conch. Hints of an angavastram across those shoulders, four substantial arms (He is chaturbhujadhari, the one possessed of four arms) emerging from that divine section of His anatomy.

In His anterior hands, afore His wide-set chest, Shadkshari Lokeshvara holds the mystical wish-fulfilling gold gem. More of that lustrous gold colour is to be found on the karnakundalas that graze His clavicles, the characteristic five spires of the crown on His head, and the sprig of myrobalan in His left posterior hand. At the centre of it all is the profoundly contemplative, boundlessly compassionate countenance of the Bodhisattva.