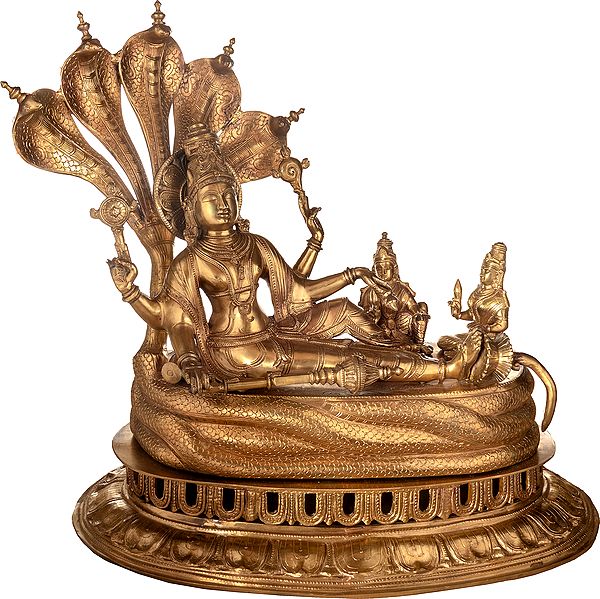 $3625
The resplendent image of a timeless yet fading tradition. The omnipotent Lord rests within the divine coils of Sheshanaga, dreaming the world as we know it into being. At each of His feet are His twin wives, Bhoodevi and Shridevi, presiding deities over earth and prosperity, respectively. His form is tall and broad and stately, in comparison to which His wives are delicately formed and petite. While He rests against the five-hooded snake, His eyes shut in profound contemplation, they look up to Him with unflinching devotion and the desire to serve and please and complement Him.

The South has a thing for bronze. Having first been patronised by the Pallavas, it is the art-loving rulers of the Chola dynasty who actually made it flourish. The heritage survives to this day, of which this handpicked sculpture is a fine example. Upon a base of flattened out lotus petals is a minimalistic latticeworked panel in the shape of a series of lotus petals. Atop the same lie thick snakeskin coils, sculpted with realistic, almost dynamic, detail. On the edge is the weapon of Lord Vishnu, which He gently but firmly holds on to even amidst His cosmic slumber; in His remaining hands are the signature shankha (conch) and chakra (discoid) and padma (lotus).

The most striking aspect of this murti is the precision and attention to aesthetics with which each aspect has been finished. From the scales on the underside of Sheshanaga’s body to the features of Lord Vishnu and the musculature of His body, as well as the iconographies of the Devis despite the scale.