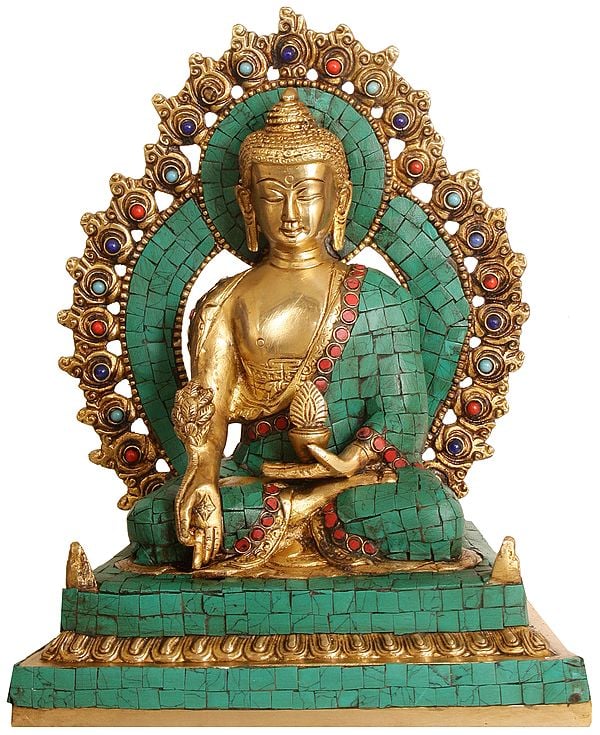 $319.20$399.00  [ 20% off ]
Lord Bhaishajyaguru, popularly called Medicine Buddha, is the presiding deity over healing and well-being. An important symbolic figure in traditional Tibetan medicine, His iconography is distinguished by the pot of elixir He holds in the hand on His lap and the sprig of myrobalan in the other which He rests upon His knee. Traditional Tibetan healing methods revere the myrobalan and centres around disease, senescence, and death. It is a blend of the mythical potions that heals from each of these three that is contained within the pot in the hands of Bhaishajyaguru.

Seated in a fine padmasana, the Medicine Buddha’s iconography has every bit to do with the Shakyamuni Buddha. Broad shoulders and a super-erect spine, the handsome form clad in a robe of inlaid aquamarine bits, draped over one shoulder. Lengthened earlobes, half-shut eyes indicative of the profoundest samadhi (yogic contemplation). Close-cropped curls on the head of the Buddha, arranged in a characteristic bun. The most distinguishing aspect of this Bhaishajyaguru composition is the aureole, the silhouette of which features flame-like extensions set off by colourful inlaid bits.

Usually ships in 10 days
Notify me when this item is available
Save to Wishlist Send as E-card Share by Email
Free Shipping. Delivered by