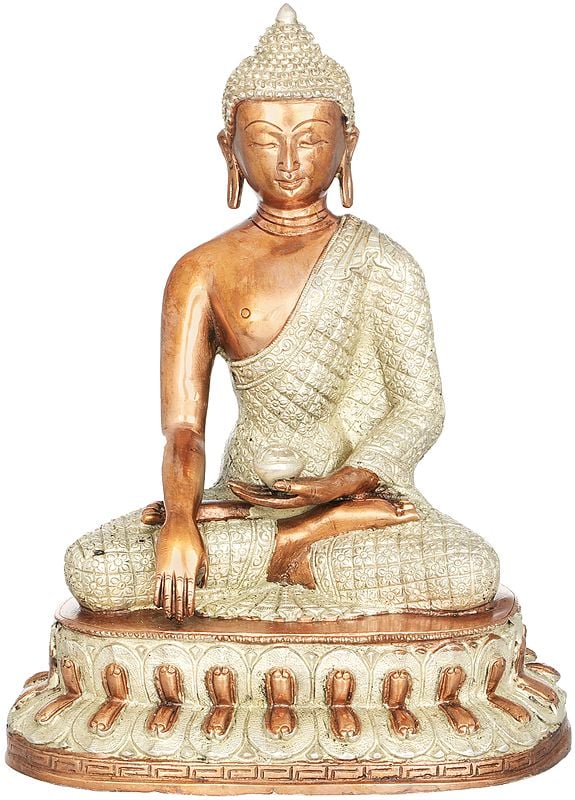 $239.00
Ships in 1-3 days
Notify me when this item is available
Save to Wishlist Send as E-card Share by Email
The piece comes with an intricate carving at the back side.

This sculpture shows the Buddha in a thinking or meditating posture. His right hand is in the bhumisparsha (earth-touching) mudra and his left hand is in the dhyana (meditation) mudra.

At the age of thirty-five, on the night of a full moon, Shakyamuni Buddha attained enlightenment. As he was alone with no one to witness this momentous event, he called the Earth itself to be his witness by touching the ground with his right hand in a gesture known as the Bhumisparsha mudra. In his left hand he holds a begging or alms bowl, symbolizing renunciation.

He is represented with extended earlobes, now empty of adornment, but which were once stretched out of shape by the weight of the costly jewelry he wore before renouncing his princely status.

In Mahayana Buddhist art, the Buddha is typically represented as a young, ideally proportioned man dressed in simple monk's robes. But he is distinguished from ordinary humans by thirty-two sacred identifying features, or Lakshana. Among the most frequently observed is the Ushnisha, a cranial bump on the head of the Buddha symbolizing wisdom. This can be observed in this artwork.