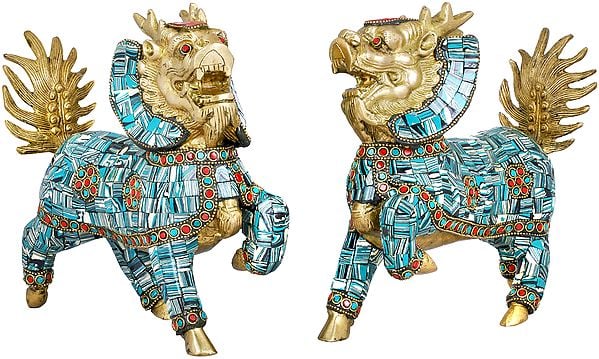 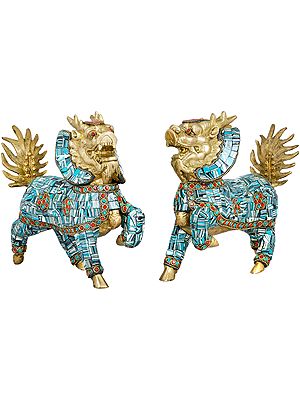 The Lion is a sacred symbol in many ancient cultures, wherein Snow Lion is a celestial animal in Tibet and personifies fearlessness, unconditional cheerfulness, east and the earth element. It ranges over the mountains and signifies one of the four Buddhist dignities namely, Garuda, Sky Dragon, Snow Lion and Tiger. This animal is commonly pictured as white with a turquoise mane. This version of a pair of Snow Lions was introduced by the 13th Dalai Lama in 1912 based on old military banners and was also used as the national emblem of Tibet on coins, postage stamps, bank notes and the still popular national flag of Tibet used by the Government of Tibet in exile.

This brass sculpture of a pair of snow lions, assumingly male and female is inlayed with square shaped, white and turquoise colored stones, cut and placed tremendously in a stylistic pattern. Milk of the snow lioness is reputed to contain special nutrients to heal the body and restore it to harmony. Some holy medicinal remedies are said to have the essence of the milk of that snow lioness.

The red eyes depict its youthful and vibrant energy of goodness and a natural sense of delight, complementing the red and blue borders and flower patterns on the body highlighting its beauty and dignity as a result of synchronized body and mind. The structure of tail is uniquely carved with lifelike striations extending outwards. The statue delineates them as roaring aloud, which embodies the sound of sunyata (emptiness), courage and truth. This roar is often applied as a synonym for the Buddhadharma and the Buddha’s teachings implying freedom from karma and a challenging call to awakening.

This item can be backordered
Time required to recreate this artwork
6 to 8 weeks
Advance to be paid now
$59.80 (20%)
Balance to be paid once product is ready
$239.20
Notify me when this item is available
Save to Wishlist Send as E-card Share by Email