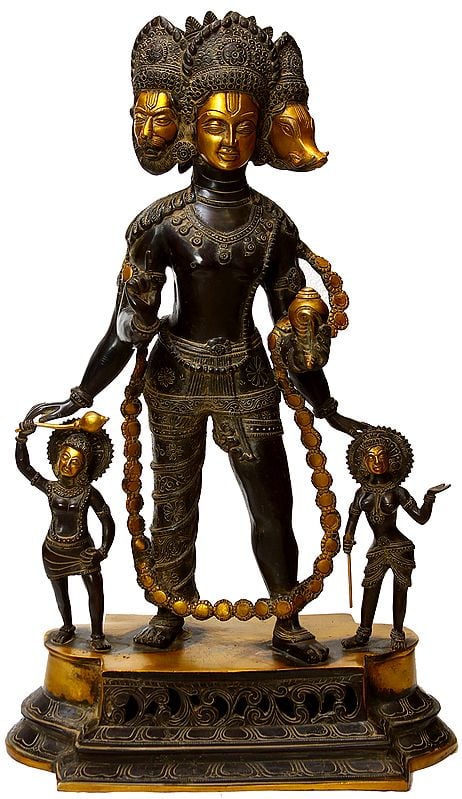 $895.00
Usually ships in 10 days
Notify me when this item is available
Save to Wishlist Send as E-card Share by Email
A unique formation of Lord Vishnu with three heads, the central one being in human form, while that on the right, Narsimha : half man and half animal, and the third on the left, Boar : animal, in iconographic tradition this form is known as Vishnu Vaikuntha, the cohesive and absolute form of Vishnu for it combines in him all three classes of living beings : man, animal and semi-man suggestive of supernatural, mythical or divine beings to include gods and all spiritual beings. Literally also the two terms ‘Vishnu’ and ‘Vaikuntha’ mean ‘Vishnu Cohesion’ or ‘Vishnu Samagra’ – absolute. Obviously, this form does not illustrate a myth or legend, nor the Vishnu-related literature incorporates any of the kind. It relates to the principle of Vishnu’s cosmic breadth, his ability to expand and be inclusive. The presence of Vishnu Vaikuntha imagery in Gupta sculptures suggests that the source of its origin must have preceded the Puranas, however now its earliest known source is the Vishnu Purana.

The Vishnu Purana is the earliest text to allude to the form of Vishnu Vaikuntha. With whatever variations, the allusion to the form in the Vishnu Purana too relates to the image’s formative or constitutive aspect, not to an exploit or set of circumstances that gave birth to such form. The Vishnu Purana alludes to Vishnu Vaikuntha as a four-headed form. In addition to the three, namely, Vasudeva : human head, Shamkarshana : Narsimha head, and Aniruddha : boar head, that this brass image has, the Vishnu Purana incorporates a fourth on the back, named Pradumnya : Kapila head, Vishnu’s ‘raudra’ or wrathful form. As the Vishnu Purana has it, Vasudeva stood for ‘bala’ – strength, Shamkarshana, for jnana – knowledge, Pradumnya, for ‘aishwarya’ – sovereignty, and Aniruddha, for ‘shakti’ – energy. This addition of the fourth head, which finds its visual transforms in Kashmiri sculptures as early as the eighth century, was not made perhaps for accomplishing Vishnu’s ‘samagrata’ for it does not add any further aspect to his personality but, ‘raudra’ being a form of Shiva, it might have been used for promoting acceptability of the image in both sects : Vaishnava and Shaiva. Kapila head is sometimes linked with sage Kapila, the founder of Sankhya system of philosophy and considered as one of Vishnu’s many incarnations.

The images of Vishnu Vaikuntha are very rare. Besides a couple of Gupta sculptures in relief form there are two other better known Vishnu Vaikuntha images, one in the National Museum, New Delhi with Kashmir being acclaimed its provenance, and other, in situ installed in the Lakshmi-Narayana temple, Chamba in Himachala. The image in the National Museum is typical of Kashmiri art style as it prevailed in the ninth century. The image installed in the Lakshmi-Narayana temple, Chamba, though not as early as the other, also pursues Kashmiri art idiom. Both are four-headed rendered on the Vishnu Purana model. This brass-cast anodized in deep maroon for denoting dark oceanic blue, the Vishnu’s body colour, a most accomplished image of Vishnu Vaikuntha, has been cast obviously pursuing Gupta model and makes a subtle departure from the style of the other two Kashmir-style images not only in the number of heads but also in other things, especially in the types of subordinate images, attributes carried in the hands, body gestures among others.

This image has been conceived with just three heads, all three front-facing. The image is four-armed, two on the rear being placed on the heads of two tiny images flanking on either side but in his normal two hands he is carrying a conch but not a lotus as he carries in other two images. Rather with the forefinger raised the image seems to be engaged in some discourse. In the Kashmiri images the attendant figure on the right is a female deity identified as ‘Gada-devi’ – mace-carrying goddess. In this brass-statue, though it holds a mace in its right hand, the attendant figure is a male. Correspondingly, instead of ‘Chakra-purusha’ – the disc carrying male attendant in the Kashmiri images, this brass statue has on the left a sword-holding female figure. These two figures in the contemporary brass-cast are not carrying any flywhisks to fan the main image as their counterparts in other statues do. The other two Vishnu Vaikuntha images have a tiny icon of the Earth goddess which is this brass-statue has not been incorporated. Unlike the other two images that are in ‘tri-bhang’, this robust form of Vishnu Vaikuntha, and more characteristic to his iconography, is forward-moving. In adornment the earlier images have a single crown for all three heads. Here it has three separate divisions. Lavish ornamentation and a large garland of flowers are common elements and so is the strange phenomenon of left leg being bare while the right, elaborately clad and ornamented. The image has been installed on an elegant pedestal designed with a plain top but with beautifully moulded rising.