This book is a study of khyal, the genre of North Indian classical music which has dominated in performances by highly trained vocalists for at least the past 150 years. It is also a study of cultural history. Spanning as it does a good portion of the periods of the British raj in Indian, the struggle for independence, and the flourishing of Indian as a republic, the history of khyal and of khyal singers is a story of generous patronage by native princes, of the loss of this patronage when courts were dissolved, and of the resilience of musicians in adjusting to the vicissitudes of contemporary artistic life.

In performing khyal, the singer presents a brief composition, and then improvises from twenty to forty minutes according to certain guidelines. One chapter of this book describes the compositions, the modal and metric materials, and the improvisational guidelines utilized by the khyal singers. Descriptions are illustrated with musical examples in transcription (in Western notation and also in a modified Indian notation) and on an accompanying cassette.

Because khyal was developed by musicians employed at courts scattered throughout North India, the manner of performing it varies among different groups of musicians (gharanas). Bonnie Wade considers six major group traditions - Gwalior, Agra, Sahaswan / Rampur, Alladiya Khan, Kirana, and Patiala - tracing the personal histories of singers (both members of lineages and other disciples), presenting the statements made in Indian sources about their musical styles, and considering those statements through analysis of recorded performances by leading musicians of recent decades. Since individual artistic achievement is so important among musicians in the Hindustani tradition, and in the development and performance of khyal, this perspective is also considered.

The book contains an extensive bibliography and discography, as well as illustrations of khyal in performance, genealogical charts, and maps.

This is a monograph on a genre of Indian classical music, khyal, which was cultivated in the princely states of Hindustan from about the mid eighteenth century and has been the predominant concert vocal genre since the early nineteenth century. Chapter 1 sets the scene, describing the Hindustani musical system briefly, sketching the political situation in which khyal has been cultivated, and initiating the discussion of musicians who have cultivated it. Chapter 2 delineates the three types of characteristics which distinguish khyal as a genre: (1) the particular melodic, metric, and compositional materials which can be utilized; (2) the selection of types of improvisation (alap, tan, boltan, bolbant, sargam, and nom-tom) which are acceptable; and (3) the placement of all of those materials for the creation of a formally balanced and aesthetically pleasing performance. Because khyal is an improvisatory genre, this is not a study of a repertoire of vocal music; rather, it is a study of musical knowledge and choice.

While all khyal singers retain generalized characteristics of the genre, there are also distinct ways of performing khyal; these distinct styles are termed gharana traditions. In a clear instance of socio-musical contexts influencing performance practice, gharana traditions were spawned by the conditions in which khyal developed – the diverse vocal genres that preceded it, the different family musical traditions fostered within it, and patronage of the singers in courts of Hindustan as widely separated as Gwalior in present-day Madhya Pradesh and Patiala in the north western Punjab. Chapters 3, 4 and 5 are discussions of the Gwalior, Agra, and Sahaswan gharanas respectively, and Chapters 6, 7 and 8 are devoted to the Alladiya Khan, Kirana, and Patiala gharanas. Each of these chapters considers the context and musicians of the gharana and their musical styles, and closes with a summary. In addition, Chapter 9 considers musicians who have attained prominence more as individuals than by association, with the musical style of any single group. It has not been possible to discuss all khyal singers in each gharana, and so some choices had to be made. This was determined largely by the availability of both printed materials about an artist and his or her music, and sound recordings of an artist’s performances (but exceptions were made in a few cases).

Recorded performances which I have analyzed are from several sources. My own taped collection of about 150 performances, gathered in 1968-9, was the basic source; it is available at the University of California, Berkeley, and the University of California, Los Angeles, Ethnomusicology Archive. Several other recordings are in the U C L A archive collection proper, while others are owned by the Department of Music at Brown University and the Department of Music at the University of California, Berkeley. I owe personal thanks to my colleagues Brian Silver and Regula Burckhardt Qureshi who provided me with a selection of rare recorded items. For printed materials, I utilized the resources at the Nehru Memorial Library, the National Archives, and the Library of the Sangeet Natak Akademi in New Delhi, the Library of the Department of Music at Delhi University, and the National Library in Calcutta. In the United States, I found the South Asia collection in the Regenstein Library at the University of Chicago most fruitful, and appreciated the courtesies extended to me there by Maureen Patterson and her staff.

Interviews with leading musicians of different gharanas were important; I was not permitted to record these, so I made it a practice to read my notes back for clarification, correction, or approval. In this respect, there are many musicians, archivists, scholars, technicians, critics, teachers, and others to whom I am indebted; they know who they are and deserve my thanks. I offer special thanks here to Yunus Husain Khan, Sumati Mutatkar, Dipali Nag, Lakshman Krishnarao Pandit, Vinay Chandra Maudgalya, Pran Nath, Nasir Ahmed Khan, Munnawar Ali Khan, Irene Roy Chowdhury, Dilip Chandra Vedi, and Amar Nath. For specific training in khyal I am particularly appreciative of instructions by Pran Nath (vocal: Kirana) and Sharda Sahai (tabla: Benares (Varanasi) ).

The music examples in this study are given in two systems of notation. I transcribed from recordings in a sargam notation (indicating pitch by the Indian solfege syllables) which I ‘created’ to incorporate the Western notational systems of showing pitch contour. I then trans notated the examples into Western staff notation. The principal incompatibility of Western notation in these examples is in the indications of rhythm. If carried out thoroughly, Western notation of rhythm gives the impression of greater precision than singers of khyal intend at some moments in their performances; when those moments arise in the examples included here, I have left off the stems and rhythm signs, placing the pitches relative to the table strokes. The key for the notational systems is on pp. x-xiv. I am also grateful to Sangeet Karyalaya, Music Publishers, Hathras, and to the Sangit Gaurava Granth Mala of Poona for permission to reproduce the compositions shown in Exx. 2-4a and 2-4b.

I wish to acknowledge the support which made this study possible: United States Educational Foundation, Fulbright, 1968-9; the American Institute of Indian Studies, Senior Research Fellowship, 1981; and the University of California, Berkeley, research stipends, 1976-83.

In a more personal vein, I have benefitted by discussions of my research with Daniel Neuman, Regula Burckhardt Qureshi, Harriet Hurie, and graduate students at the University of California, Berkeley, Department of South and Southeast Asia Studies- Usha Jain, Bruce Pray, Karine Schomer, and Rita Sahai. Preparation of the genealogical charts was ably completed by Yos Santasombat of the Department of Anthropology at the University of California, Berkeley. Preparation of the accompanying cassette was completed by Michael Gore.

Four other persons have been particularly helpful with the final preparations of this book. Ann Pescatello has been a good colleague in developing several facets of this study; Rosemary Dooley, of Cambridge University Press, has been an extremely supportive and knowledgeable editor; Judith Nagley, of Cambridge University Press, undertook with spirit, skill, and intelligence the daunting task of subediting this manuscript; and John Blacking, without whose foresight the book would not have reached this stage, has been a sympathetic colleague in ethnomusicology. I owe much to him in ways too numerous to mention, not the least of which has been our dialogue in ethnomusicology, which has led to this volume. 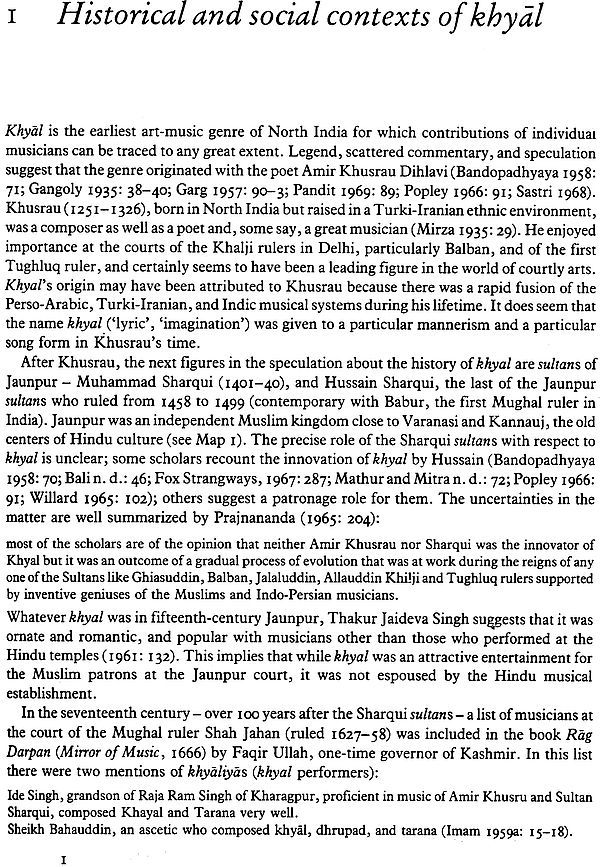 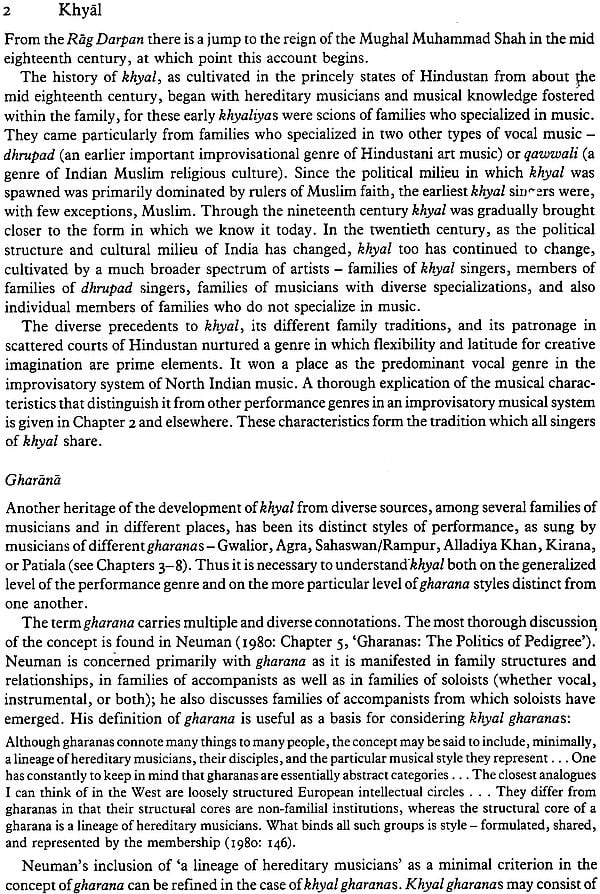 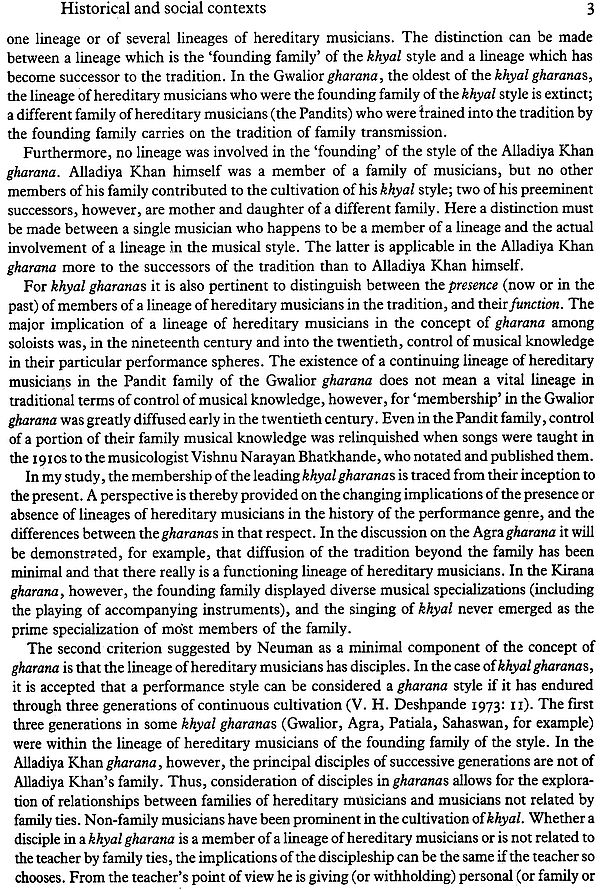 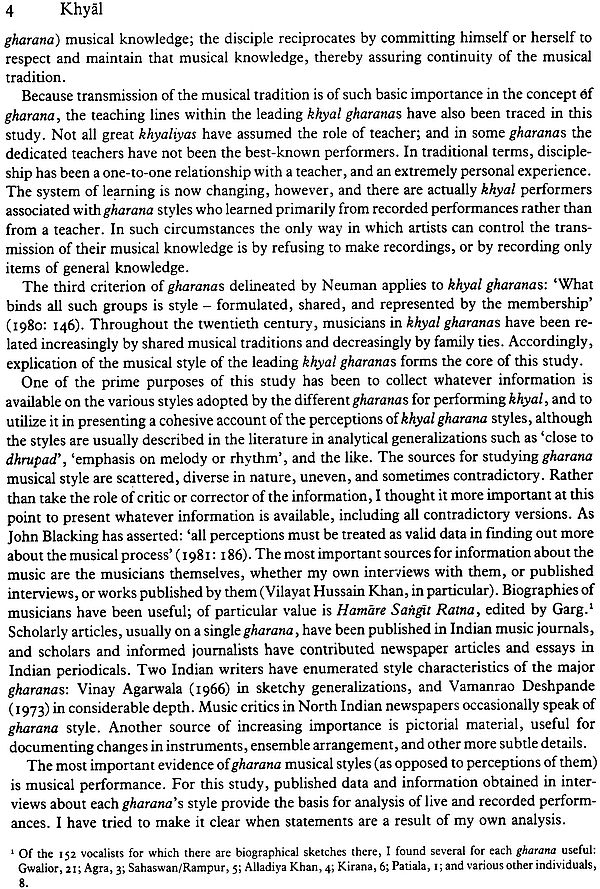 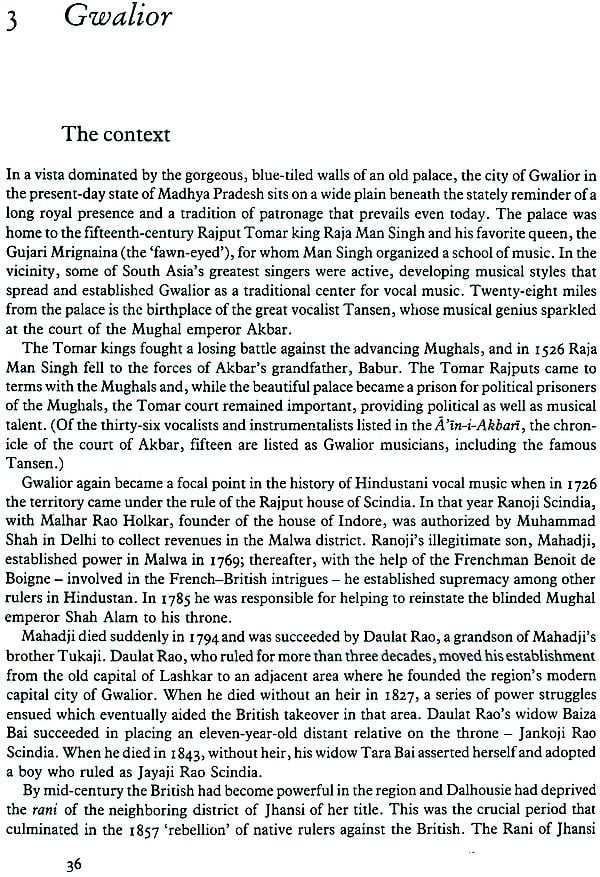 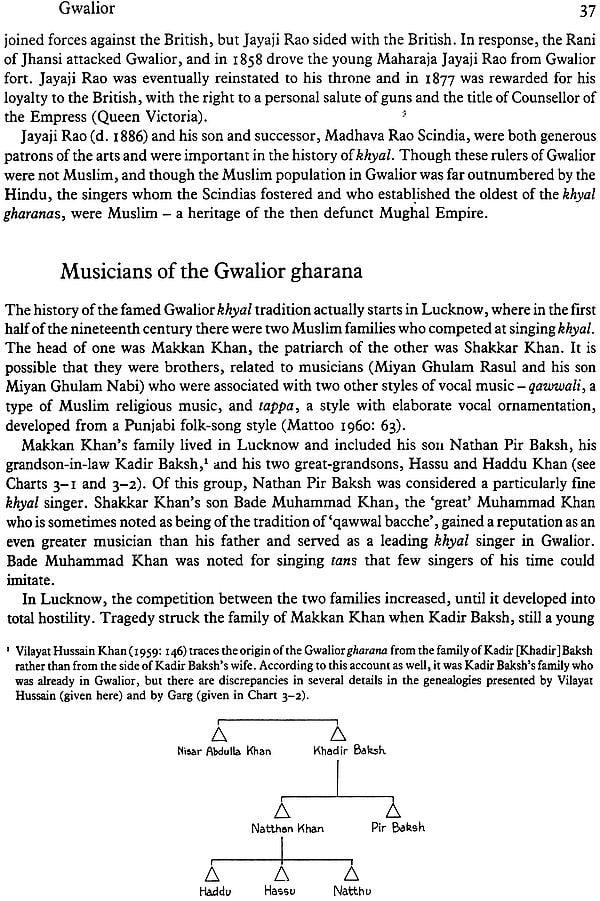 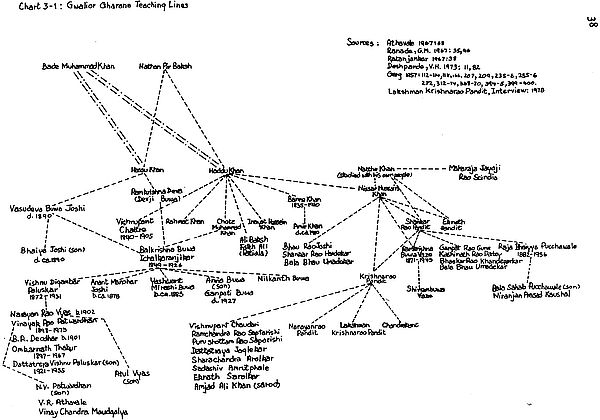 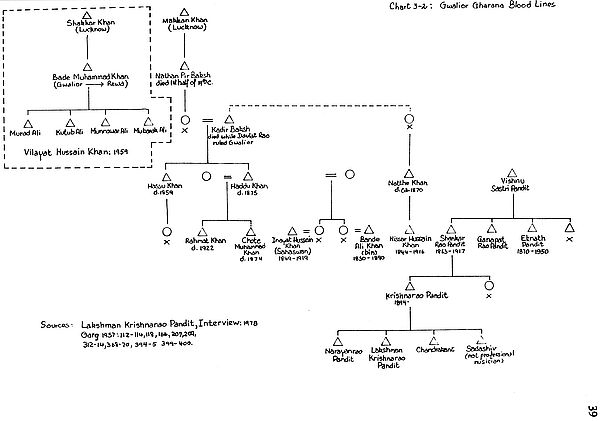 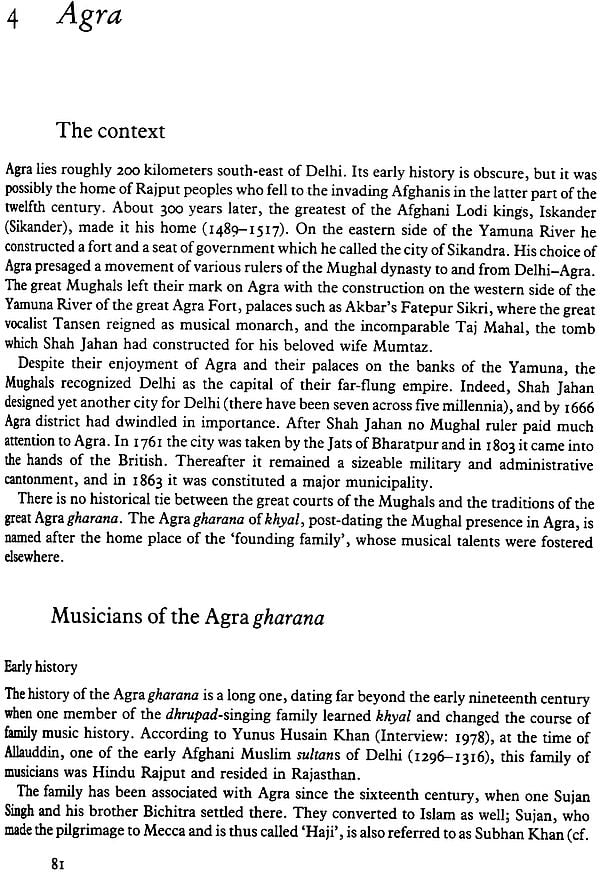 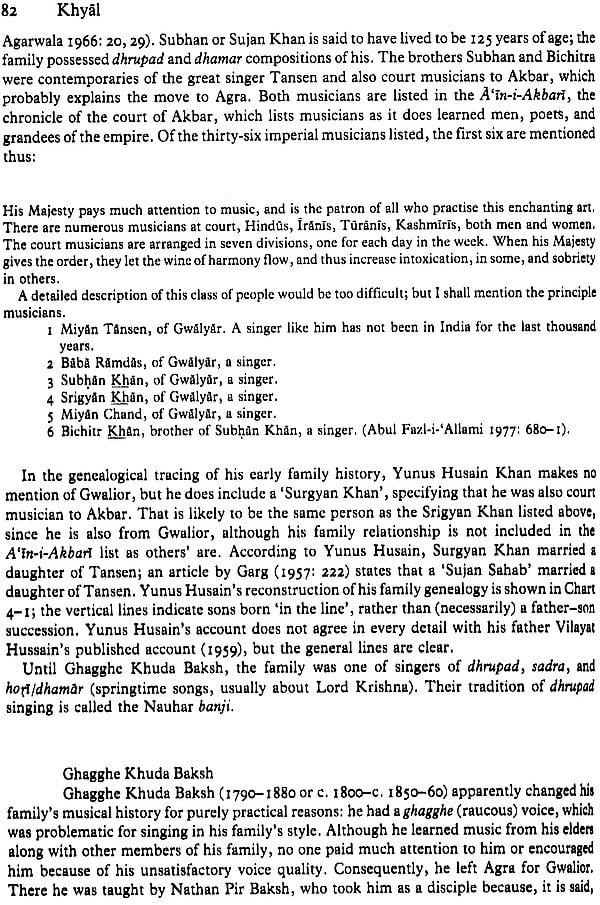 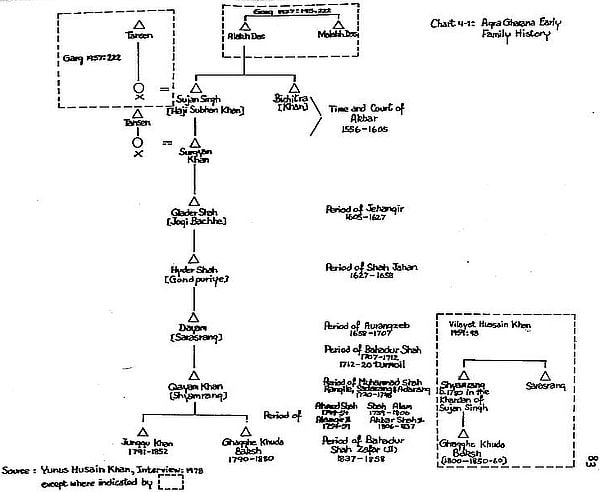 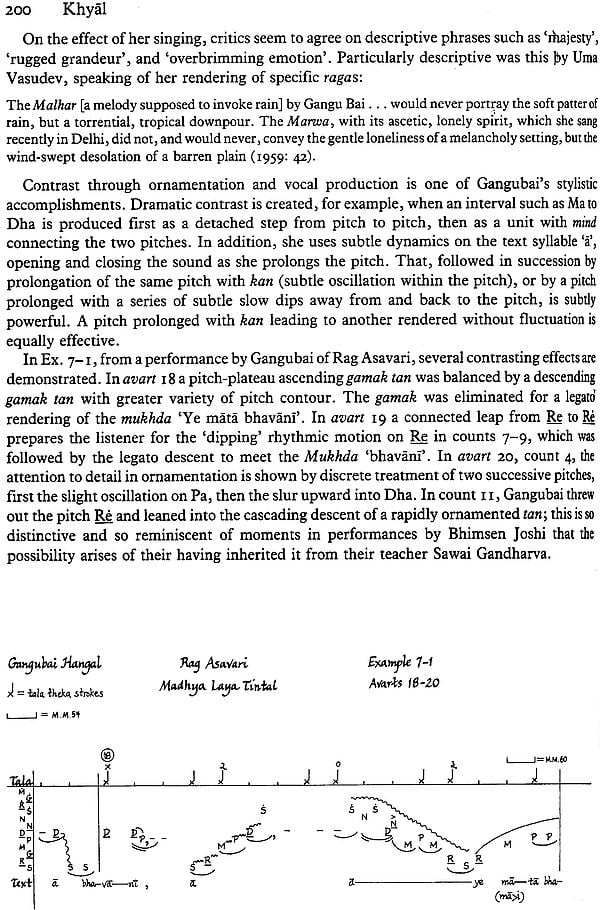 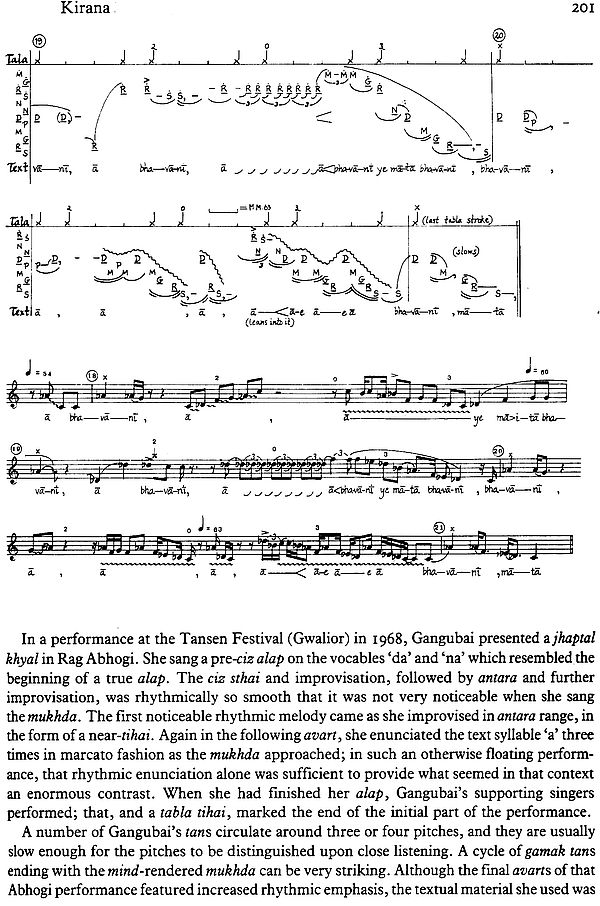 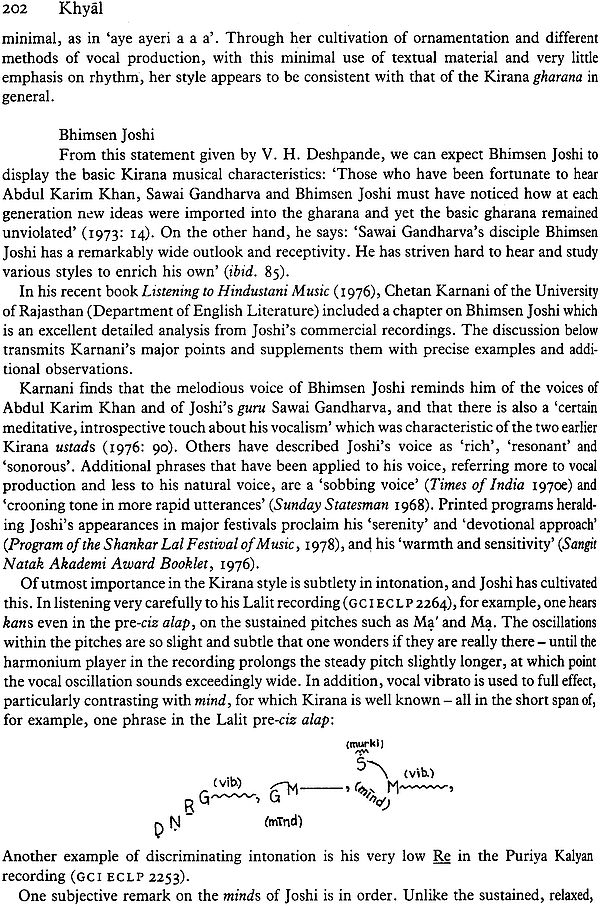 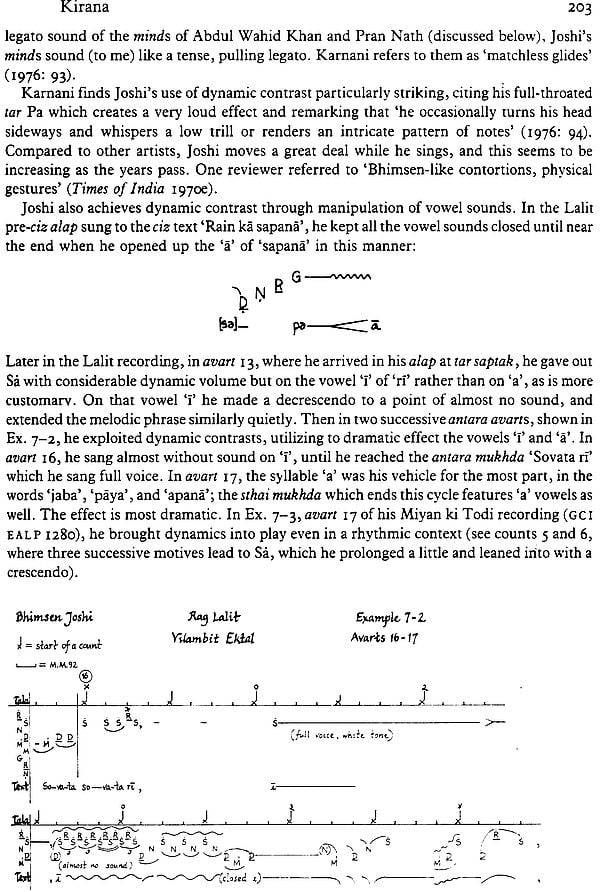 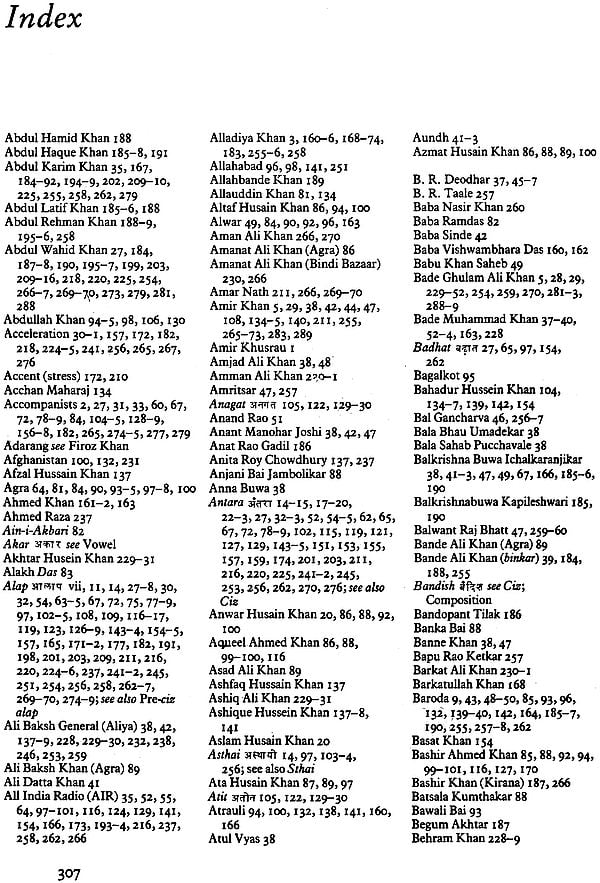 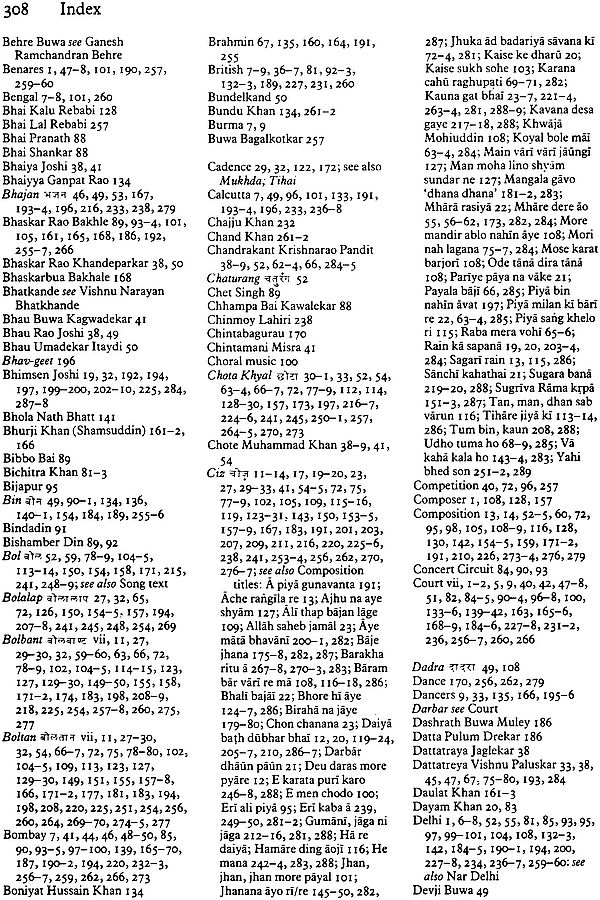 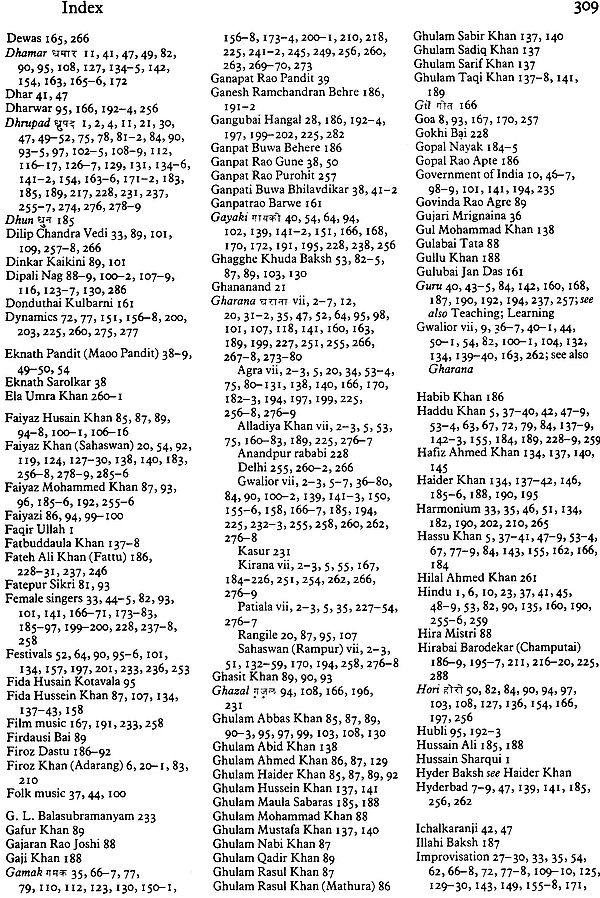 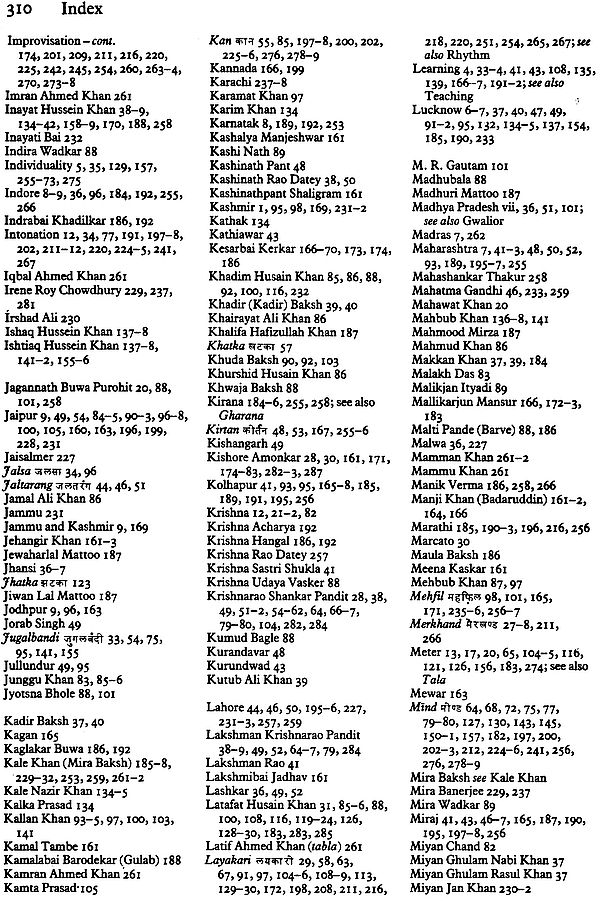