Mirza Ghalib yet stands unparalleled in the world of Urdu poetry. His body of work was not just reflective of the turbulent times that he wrote in, but also resonated with beauty, culture, passion, love, longing and was resplendent with imagery. His ghazals are unique, as he wrote about all the phases of life. He was endowed with a passionate appreciation of life, yet deeply questioned the very fundamentals of faith and dogma. His philosophy and views on the times that he lived and worked in are the most relevant. Ghalib is inarguably one of the greatest poets of all times.

Based on the eponymous serial made by renowned director, lyricist and poet Gulzar, this book presents Mirza Ghalib's life and poetry in the form of a scenario, moving away from the conventional format of a biography. Mirza Ghalib: A Biographical Scenario is an extremely important historic and creative document.

Gulzar is one of Indian cinema's most sensitive and creative directors; a lyricist par excellence, one whose work never fails to surprise, bring a tear to the eye or a smile on the lips; a humble man with humble beginnings who is unafraid of experimenting. A career that began more than three decades ago comprises a rich repertoire of not just films, but also authoring several anthologies of short stories, including Raavi Paar and Other Stories: One of the two immensely popular television serials that he has directed has been on the life of Mirza Ghalib, who commands Gulzar's heartstrings, and the most recent one is based on the works of one of Indian literature's greats, Munshi Premchand. Winner of the Sahitya Akademi award, Gulzar's interest in literature is more than just a passing fancy. He writes poetry, short stories, all his works have been translated into English, and he is the creator of the three-line English, and he is the creator of the three-line poem, called Triveni. Writing for Gulzar, is his first love, his passion, his junoon, his life breath!.

FOREWORD
Ghalib towers above scores and scores of Urdu poets like a 'Victor' as his nom de plume suggests. He is as complex a poet as he is charismatic. His ghazals are unique, not only for the intensity of the emotions and thoughts they express, but also for their exquisite charm, and the profound feeling for the beauty of the world, which they reveal. Ghalib sang of 'all the phases of life'; his was a range and depth of feeling no other Urdu poet had. Given the captivating spell, semantic density and extreme quotability of his poetry, Ghalib today ranks with the best, and undoubtedly qualifies as a world-class poet. He is also valuable for a completely fresh approach to the world. He was endowed with a passionate appreciation of life, yet he deeply questioned the very fundamentals of faith and dogma, and brooded over the nature of joy and sorrow and life and death. He was endowed with an inquiring mind assailed by disturbing questions about the lot of man in this universe. He generally reveals a mood of melancholy, yet it is enlivened with a zest for life and love for 'ruby vintage' and 'foaming bowl'.

Interest in Ghalib's poetry has steadily grown in recent times. The modern mind is especially attracted by Ghalib's concern for ideas, subvertive interrogation, psychological probing, cryptic brevity, ingenious logic, and also by his capacity to flout the conventional poetic language. In Ghalib, the contemporary mind sees one who, like itself, is iconoclastic and cherishes the intellect while yet feeling the need for a spiritual center.

Today, we may ask whether is not the reception of Ghalib at the turn of the twenty-first century so pervasive and widespread that one may venture to say that Ghalib in India, perhaps, has already broken the language barrier and permeated the Indian literary mainstream? It would not be an exaggeration to say that Ghalib today is part of our collective memory as people of other languages too enjoy and quote him frequently. If one looks at the graph of the reception of Ghalib during the last century, the rise in recent times appears to be phenomenal. The role of the erstwhile gramophone companies, New Theatre of Bengal, and the advent of great singers, such as K.L. Sehgal and Begum Akhtar in the thirties and forties in this context is yet to be properly assessed. Most importantly, Sohrab Modi's movie on Ghalib (story by Manto, and screenplay by Rajinder Singh Bedi) contributed to spreading Ghalib's fame far and wide.

Then came the revolution of the electronic media with the advent of the audio and video cassette and the age of satellite television. Guizar's highly sensitive serial, Ghalib entered this space and met the challenge of time at that critical moment. Jagjit Singh's singing and Naseeruddin Shah's characterization notwithstanding, Guizar's creativity served as a catalyst in turning Ghalib into a household name in the subcontinent. There is no gainsaying that Guizar immensely succeeded in identifying with Ghalib's complex and iconoclastic approach towards love and life. Today, he may justifiably claim that Ghalib had three servants; two died their natural death, he lives on.

The screenplay is being published after decades, which of course amounts to retrieving an historic and creative document. I hope it will be received with the love and care that it deserves.

'Ghalibiat' is in itself a complete solar system; wherein Ghalib himself is the sun and is surrounded by critics and researches like planets! Some of who are important and some, well, aren't. Amongst them, one stands apart rich with oceans of knowledge- Dr. Gopi Chand Narang. At this point of time, there is none other than Dr. Narang who could be called an authority on Ghalib and Urdu. This scenario written by me is presented to him in utmost humility, in the hope that I would receive his valuable criticism, suggestions and corrections. I am grateful to him for his words.

I have a confession to make: I make no claims of authority on Ghalib or his works in its entirety. However, I do confess to having a deep bond with the poet. In school, I learnt Urdu from Maulvi Mujib-ur Rehman. It was thanks to him that I was introduced to great poets like Ghalib, experienced a kind of familiarity with Ghalib Maulvi Saheb always addressed him as 'Chuchha Ghalib'! No other poet has thus been prefixed.

There are some elders with whom you form a bond that could be termed a friendship. While Maulvi Saheb used to teach us Ghalib, I could feel that warmth of friendship with the poet. I learnt Urdu only in school. After that, It was Hindi all along: Neither was it my age nor did I have the inclination to go back to the basics again. Maulvi Saheb left for Pakistan; the Urdu that he left behind, became a part of me. With time, my interest in Ghalib grew.

I always say Ghalib had three trusted servants who were always with him. The first was kalloo, who was with Ghalib till his very last days.

The second was Wafadaar, who had a lisp. The third was I. They lived their time. I am still in service of him.

There was something 'down to earth' about Ghalib. The common man could identify himself with the poet. He was very fond of mangoes, on eating too many of them, he would get boils; he would then apply ointment and would describe the mundane details of applying it. He could have been your neighbor, so casual he was! I feel that I lived with Ghalib in his home.

He used to borrow money, on being unable to repay it, he would search for innovative excuses. I fell an emotional bond with him. I wish I could somehow repay all his depts. Instead, generation and I, we all owe a debt to him!

I don't know if anybody will agree with me or not, but in spite of having fathered seven children and none of them surviving, his sense of humour surpassed that of all the other intellectuals of his time. The thought of a second marriage never crossed his mind. He loved and respected his wife and shared the pain and loss of their children with her.

When 'Chuchha Ghalib' recited a couplet, it was from the heart; it was as though he had felt it. He had a vast repertoire of couplets for every turn that life took.

Ghalib was a gambler, but he played it like a game. He was fond of drinking and never tried to hide the fact. He was not ashamed of it. Nothing about him or his life else was 'put on'. No wonder, that his life left a deep impression on me. Whatever material I could gather on him over a period of ten or eleven years, I presented in the form a serial on his life.

Now, did I make his life or did he make mine? 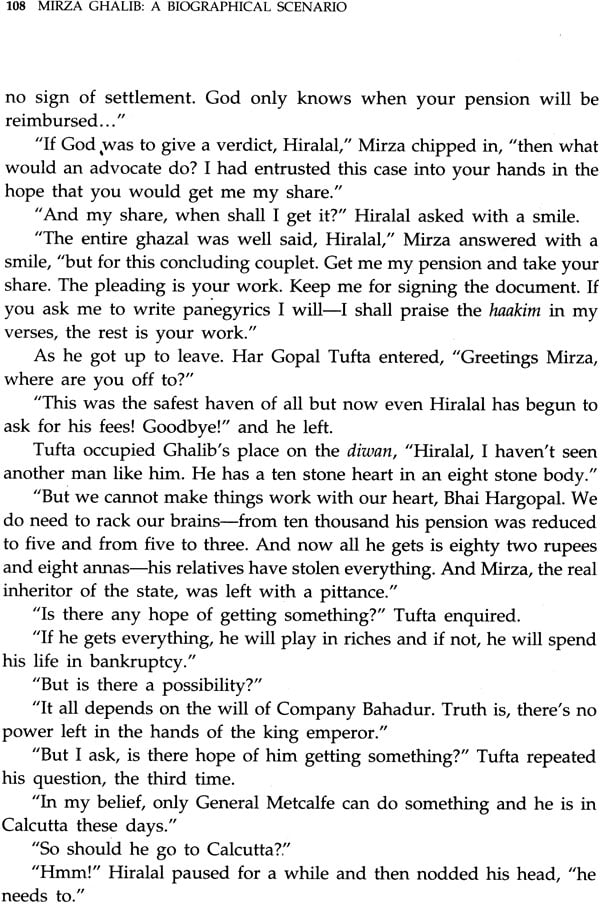