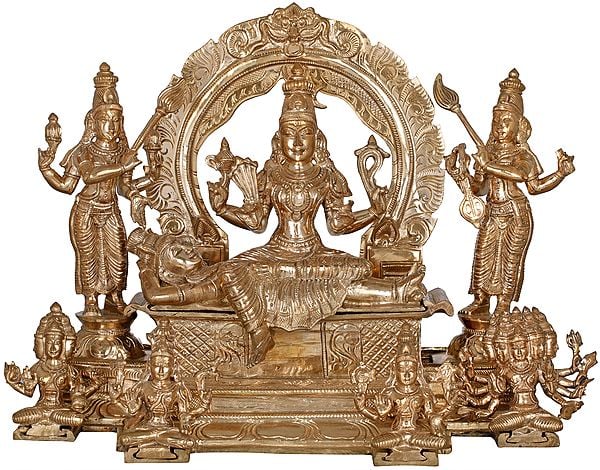 According to Lalita Sahasranama, the deity seated at the centre in her lalitasana is goddess Durga in the beauteous form of Sri Lalitha Tripura Sundari Devi with Lord Shiva forming the cover of her throne, representing the worldly fact, ‘Shiva without Shakti is Shava’. The high raised multilayered pedestal imbibed with awe-struck carvings is surrounded by other deities serving the supreme.

The famous verse, ‘Sachamara Rama Vani Savya Dakshina Sevita’ is clearly depicted in this sculpture, where Rama and Vani are Goddess Lakshmi and Saraswati who stand on right (dakshina) and left (savya) respectively and serve (sevita) the reigning deity with chamara (fans). She sits on a pancha pretasthana, as the five Brahmans sitting at her feet, namely, Brahma, Pashupatinath, Vishnu, Rudra and Shiva, represent the legs of her throne.

The most enticing feature is the use of panchaloha for its making and the deities are adorned in marvelous jewels and attires with the South Indian style solid crowns that glorify their essence. Lalitha Devi holds her symbolic weapons in all her four hands to cut the worldly desires in our heart and bring us to the feet. The leafy Kirtimukha throne stands erect in unique patterns forming a large aureole behind the divine mother.

Free delivery
Add a review
Have A Question