Analysis of Marriage through Astrology

Prof. Basistha Tiwari was born in an orthodox Brahmin family of a small village named Matihani Madho of Gopalganj district of State of Bihar. His forefathers had migrated from a village named Budiabari of Gorakhpur in Uttar Pradesh to that village and settled there. After getting Primary Education from the Sahu Jam High School, Mirganj, he came to Calcutta and graduated in Science with Mathematics as one of the subjects from Calcutta University. Astronomy was one paper in Mathematics which created interest in the knowledge of Stars and planets. The pursuit of astronomical knowledge led him to study astrological books and thereby became interested in astrology. He also completed one year evening the course in astronomy at the M.P. Birla Institute of Fundamental Research. M.P. Birla Planetarium, Kolkata. After graduation he joined State Bank of India, Calcutta Local Head office and had to work at different branches on different assignments and therefore hardly got time to pursue the study of the subject seriously. It became possible only when he was posted at the Central Accounts office, Kolkata. After retirement he loined the Academy of Indian Astrology, Kolkata and obtained his Jyotihsastri and Jyotisacharya degrees with Gold and Silver medals respectively. Thereafter he was appointed as honorary professorof astrology at the Academy. He also got his Master Degree in Astrology (M.A. Jyotisham) from Potti Sreeramulu Telugu University, Hyderabad with first class. He is a very serious student of Astrology and at present teaching astrology at the Academy, Kolkata.

The subject of the book is marriage. At present, the numbers of domestic violence and conjugal disturbance are increasing day by day which attracted the attention of the Author to study the matter seriously. He took the marriage as the subject for his dissertation paper in MA. examination and did much research work on it. This research works has been compiled in the form of a book which is named as “Analysis of Marriage through Astrology” It contains the principles of astrology and significations of planets, rashis, bhavas, nakshtras etc., in the first few chapters. Thereafter combinations of marriage, conditions for controlled sex life in man and woman, loose characters, number of marriage, late marriage, unmarried etc, have been dwelt upon. Mangal Dosh has been dealt with elaborately because wrong conception about it has been propagated in the society causing a great problem to the parents of the bride and the groom, A new approach in the matter of Marriage match-making has been given separately in a very scientific way. A chapter on the children (Santan) i.e. begetting of child, pleasure from the child etc has been given. A separate chapter has been given on the muhurta of marriage which is very important but is seldom followed by the pundits and priests seriously and meticulously. A separate chapter, horary marriage, has been added for those who do not have their detailed birth data. A chapter on the longevities of bride and groom has been added. Many methods have been given for calculation of longevity but a complete new idea, concept and methods of calculation of longevity on the basis of the bhogya nakshatras of lagna, 3rd bhava centre, and 8th bhava centre, Sun, Moon and Saturn have been given. It is worth reading.

According to Hindu Philosophy, there are four pillars of Hindu Society. Dharma, Artha, Kaina and Moksha. These are the four main goals of human life. Dharma means religious, piousness, righteousness etc. Artha-acquiring wealth to maintain the requirements of life, Kamavarious kinds of mundane desires and enjoyments and Moksha- the final liberation from this world. These are controlled by the planetary positions at the time of birth of a person as well as in transit. It is, therefore, essential to study the effects of stars and planets on living beings to know what are stored in their destiny. The study of the influence of light on the human beings on the Earth is called Jyotish, a Shanskrit term derived from two roots: Jyoti (light) and Isha(lord) i.e. the lord of light.

Everything in the universe is constantly moving and changing, and that which is changing is bound by time. Stars are luminous bodies radiating energy into space. The rays of light, then, come from the stars and planets, which are surrounded by their own gravitational and magnetic fields influencing this light. The Earth, then. receives this light which influences the living and non- living on it. According to ancient astrologers, Saturn is the most distant heavenly body and the Moon is the nearest influencing the Earth. The Sun is considered soul of the solar system and the Moon is the mind. The light energies coming from the Sun, Moon and stars all separately influence the physical, mental and spiritual status of all beings on the Earth. Thus, we see that the Jyotish (astrology) is a science which controls every kind of activities on the Earth whether individual or mundane. Thus, astrology helps to achieve the above mentioned four kinds of goals of human life. In the present book the third goal ‘Kaina’ which means sexual or materialistic desire/enjoyment has been dealt with. To achieve the above goals successfully our ancient saints introduced sixteen kinds of Sanskars which are required to be followed by every human being especially Hindus in course of Jivan Yatra (journey of life) i.e. from birth to death. Marriage is one of the most important Sanskar and is treated as religious deed because it is not considered as means for mere satisfaction of sensual gratification but a pious deed to produce progeny to keep the flow of offspring. Thus, it gives tremendous services to the Society as a whole.

I have, in this book, endeavoured to discuss the effects of heavenly bodies on the sexual life of a human being strenuously and elaborately as far as possible with examples. In practical life, it has been found that the couples with lesser score of match-making in Astakoota Milan system enjoy happy and peaceful marital life whereas there are some couples with high score who lead a miserable married life. To cope with this problem, I have given some new technique for match-making. In this system, besides the Astakoota Milan, following four new methods/Koots have been given to examine and match

(a) personalities of the bride and the groom

(b) love, peace and happiness in the horoscopes of the couple

(c) moral characters of the bride and the groom

I shall be happy to receive suggestions from the learned readers. Error, if any, found in the book may please also be pointed out for rectification in the future editions.

I should not fail in my duty to mention that Prof. Jamini Mohan Chattopadhyay, my Rev, teacher and the Principal of Academy of Indian Astrology, Kolkata has provided due encouragement, inspiration and guidance to me to write this book. I, therefore, extend my heartiest thanks to Prof. Chattopadhyay.

I am thankful to Dr Y.C. Bhattacharya, Jyotihsastri and ex-AGM of Sate Bank of India for his laborious work of proof-reading and editing the book in spite of having indifferent health.

My thanks are due to Shri Mimi Kumar Singh for his designing the book, my students Shri Jitendra Kr Banka, industrialist and Shri Mrinal Banerjee, Jyotisacharya for their valuable services rendered in making liaison with press and valued suggestions.

I am also very much thankful to my son Sanjay Kumar Tiwari, B.Com, Jyotihsastri who prepared all the horoscopes given in the book as case studies. Smt. Tanuja Tiwari, my daughter-in-law, also deserves my sincere thanks for her services rendered to me in course of writing the book.

At last, I am very much thankful to Shri Narinder Sagar of Sagar Publications for his kind consent to publish the book.

I feel much pleasure in introducing Prof. Basistha Tiwari to the enlightened and learned readers and students of Astrology. Prof Tiwari has sincerely devoted his entire energy for uplifting the Hindu System of Astrology and the book “ANALYSIS OF MARRIAGE THROUGH ASTROLOGY” is the result of his ardent labour and sincere efforts for many years. The science of Astrology is a very difficult subject and nobody is allowed an access to the secret of this subject unless he sweats profusely in its cultivation for well over decades. This particular branch of Astrology is the most complex and intricate subject and therefore, it requires much labour and research to go to the depth of the subject. The modern society, specially Hindu society, faces a lot of domestic violence and post-marital problems leading to the unhappy end of a married life. The book is an attempt by the author to study such marital problemes astrologically so that the society may get benefit by correct selection of the partners in the marriage.

I may add here that the book is excellent for its extensive delineation and thorough analysis of marriage It may be classed as an authentic work on marriage in the Sidereal System of Hindu Astrology. T, therefore, recomend it as a text book of Predictive Astrology for the benefit of the students of JYotirvigyan at the University level.

At last, I wish a grand success to the author and his work for all time to come.

The book titled “Analysis of Marriage through Astrology” has been thoroughly gone through by me at its manuscript stage. It gives me undoubted impression that an astrological book of this type is rarely available in the market. I am confident that it will create interest in all kinds of people, whether they believe in astrology or not. This book is a strong evidence of extremely hard research work on the subject which has resulted in producing an elaborate discussion on almost all possible astrological aspects on marriage, which is one of the most important phases of human life.

Once published, the book may create an uproar in the educated world, besides benefiting numerous persons interested to know the properties required for smooth and happy married life.

I wish the book and its author an unprecedented success after its publication. 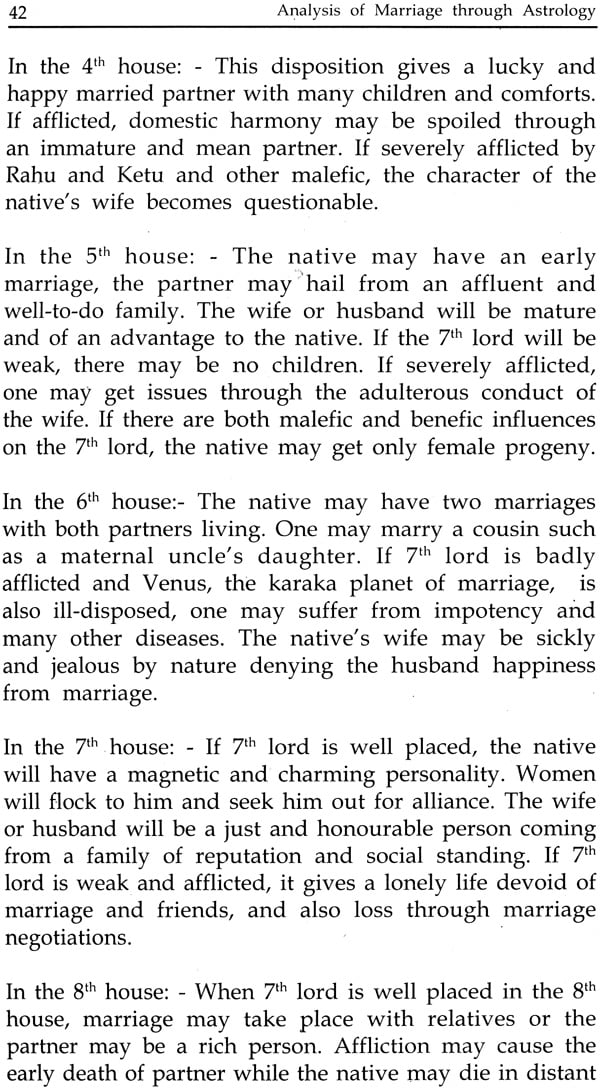 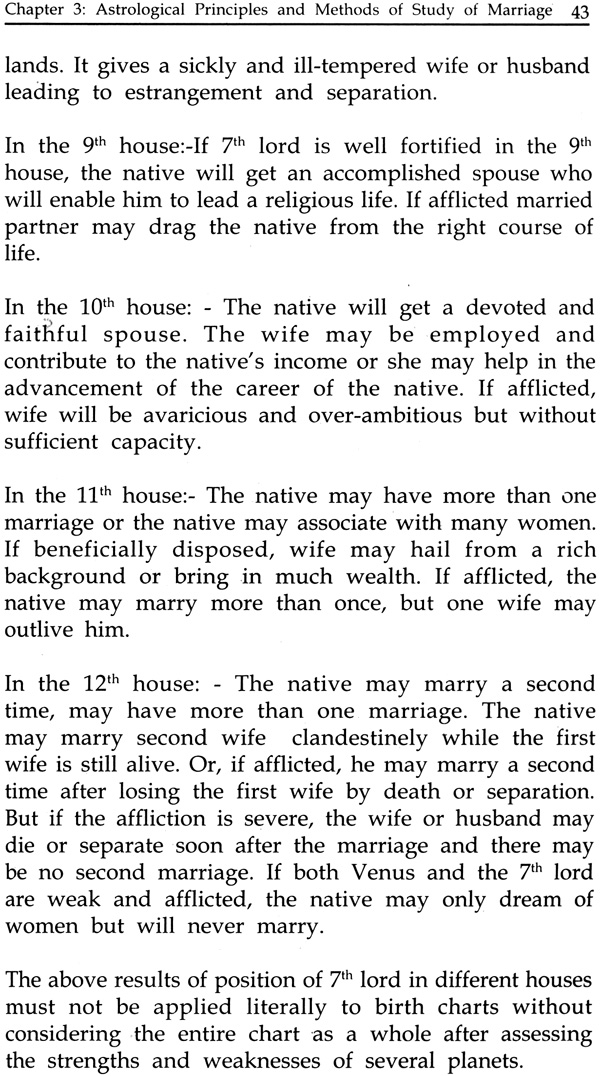 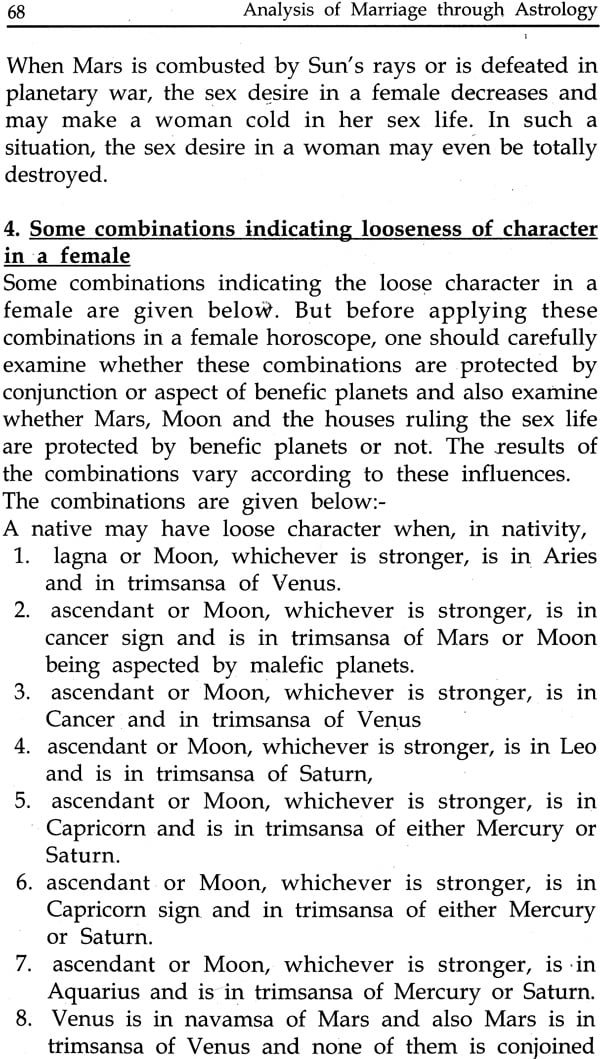 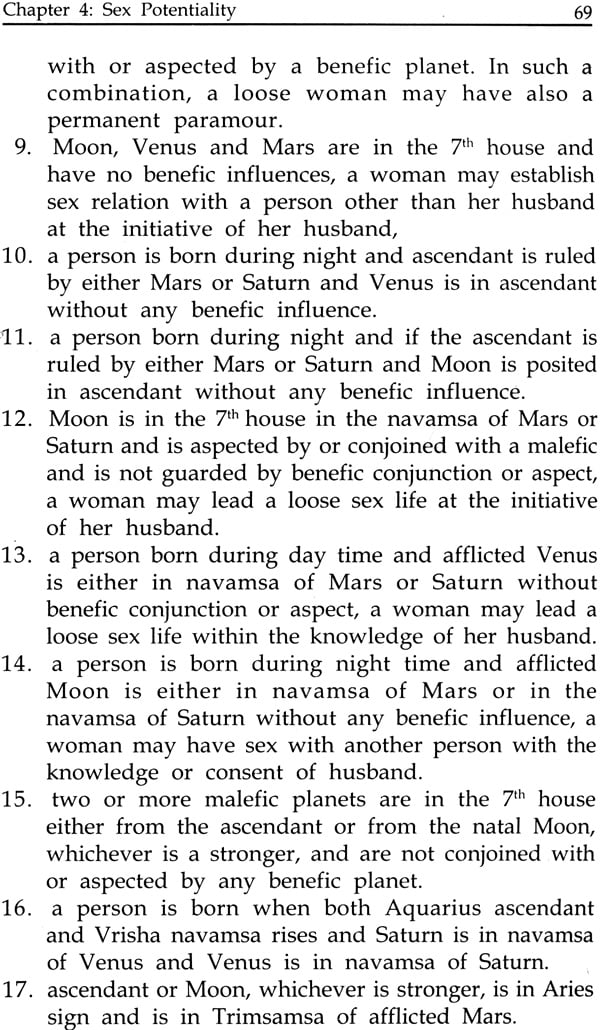 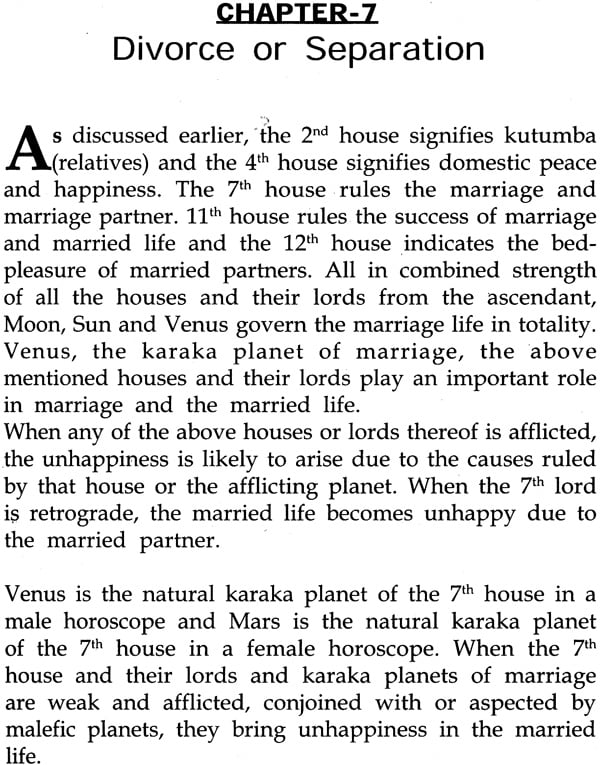 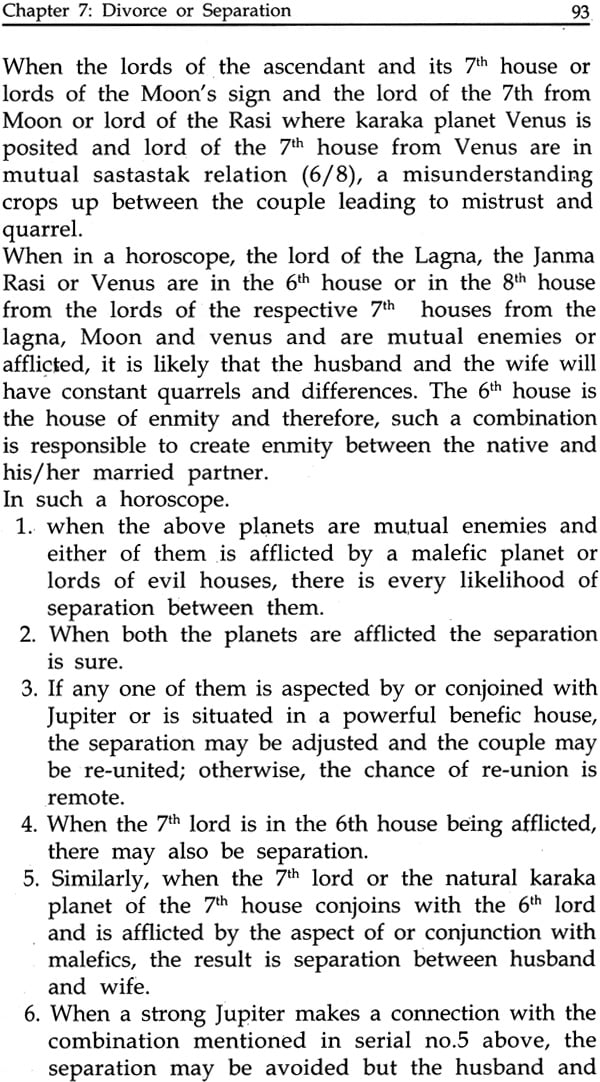 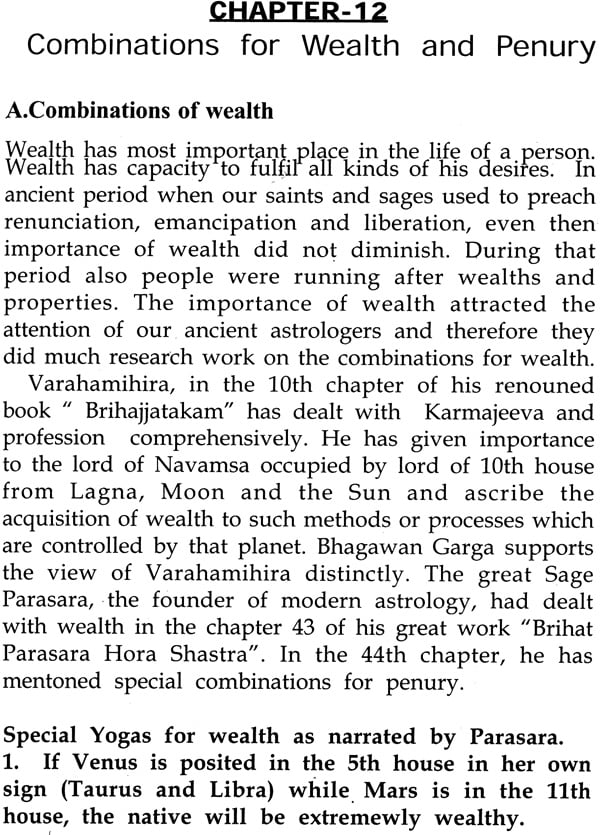 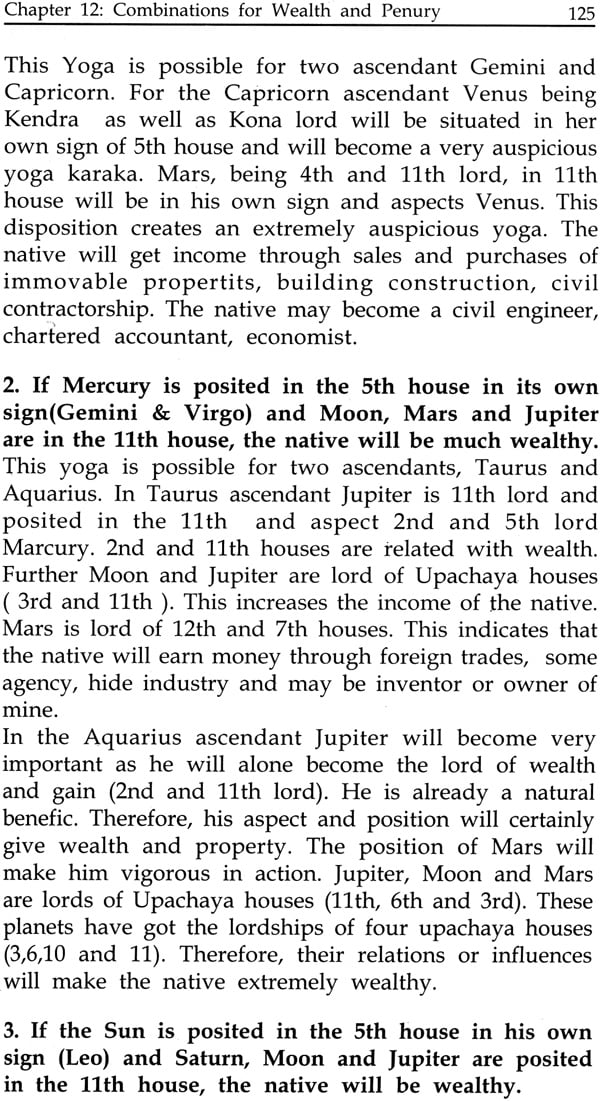 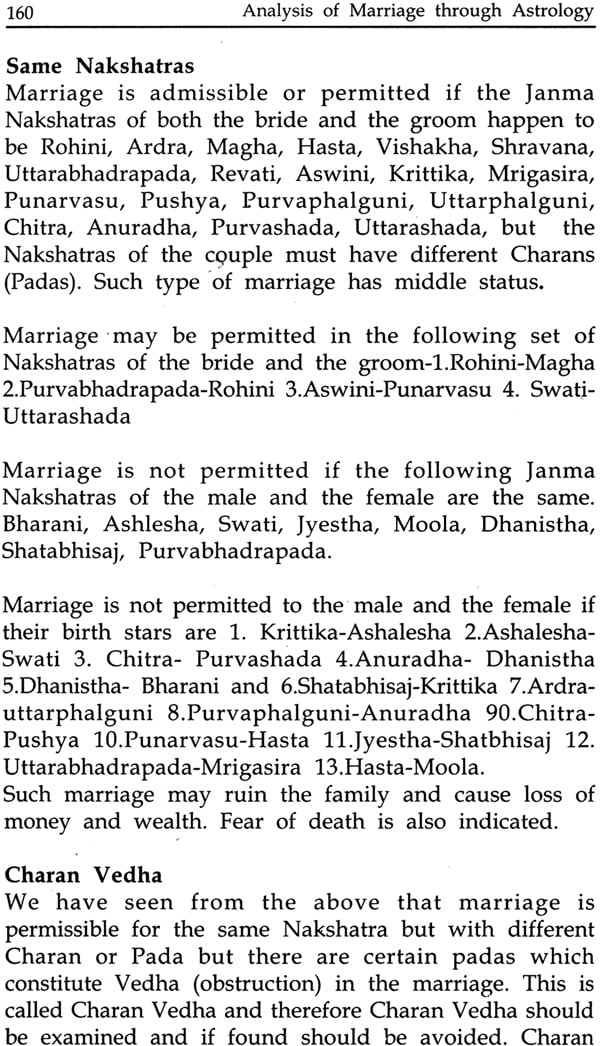 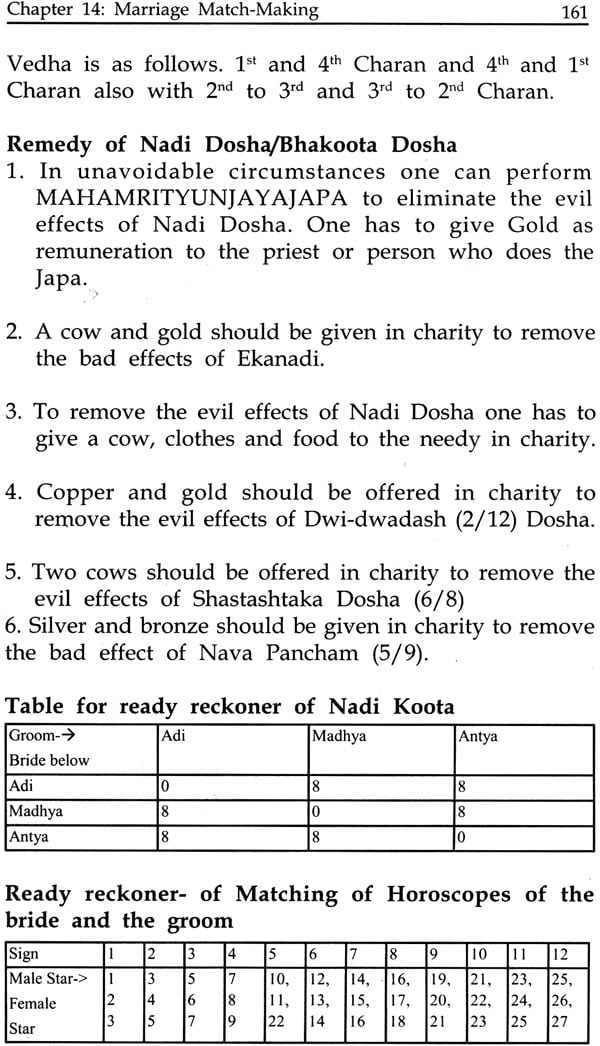