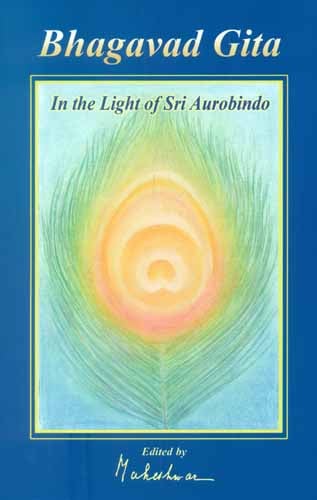 Moreover, practically in every chapter, the editor has quoted the most relevant passages from Sri Aurobindo's book in order to bring home to the reader the deep and comprehensive meaning of 'shlokas' as revealed by the Master of the Yoga.

The book aims to be a pathway leading to the great revelation by Sri Aurobindo of the Bhagavadgita; and for this purpose the first and the last chapters of "Essays on the Gita" have been included in full.

Maheshwar, - that was the name given by The Mother, - was otherwise known as Dr. H. Maheshwari. He was a deep thinker, philosopher, educationist and above all, a true sadhak of the Integral Yoga of Sri Aurobindo. He was a lover and scholar of Bhagavadgita. Studying the Gita in the Light of Sri Aurobindo was for him a joy, a growth, a realisation.

Born in March 1921, in U.P., he served as a Professor and the Head of the Department in Degree Colleges. In 1971 he took early retirement from the esteemed post of Principalship of the Institute of Oriental Philosophy, Vrindaban, and joined Sri Aurobindo Ashram, Pondicherry, as a seeker, a devotee and disciple of Sri Aurobindo and The Mother. He served them with integrity of knowledge, devotion and dynamic action throughout his life.

He was a professor of Philosophy at Sri Aurobindo International Centre of Education. He was also a research-guide and examiner of Ph.d. theses of various universities. He went on extensive lecture tours and conducted several Swadhyaya-camps and Education camps at Sri Aurobindo Society, Pondicherry and its various centres all over India as well as in England and U.S.A. From 1995 to 1997, he served as the first chairperson of Sri Aurobindo Chair of Integral Studies at Sardar Patel University, Vallabha Vidyanagar, Gujarat.

On May 19 in 2002, at Pondicherry, he took his eternal abode in the Master's Eternal Consciousness.

It is indeed a great privilege of life to be with the Gita as its student, especially as it is revealed to us in Sri Aurobindo's ESSAYS ON THE GITA. To me this privilege was greatly enhanced when the work of preparing an edition of it in the light of Sri Aurobindo came to me with the Mother's blessings in the year 1972, Sri Aurobindo's Birth Centenary Year. What it meant to me, no words can describe.

This work brought an opportunity but at the same time a great responsibility that could be borne with abilities I hardly have: thorough grounding in Sanskrit as well as in English, a probe and entry into the spirit of words above scholastic means, scrupulousness and openness and patience of the mind, clarity and profundity of understanding, and, above everything else, things of consciousness that belong to the life of sadhana above pedantic gropings. I was, as I am, aware of my limitations, conscious of my inhabilities. Without Grace such a work would not be accomplished.

The Essays on the Gita being there to draw upon, an inestimable help and guidance from Sri Aurobindo's 'Word-Body', his 'vanmaya deha' were all the time a source of assurance to me while carrying on the work. Despite my inhabilities the work continued and the present edition was ready in the year 1974. For reasons beyond me it could not go for publication earlier. That it is coming out now in the Mother's Birth Centenary Year is of special significance to me.

While engaged in the work of preparing the present edition I experienced the complexities and difficulties of rendering the Sanskrit idiom into the English tongue which I had never imagined. In the case of such slokas as have been translated by Sri Aurobindo and given in quotes in the Essays, - the number of such slokas is of course considerable, - there was no difficulty as I had the advantage of taking them bodily. But even this process was rendered thoughtful to me by the Essays, demanding my full attention, since quite a few of them have been alternatively worded by Sri Aurobindo in different contexts. A very large number of the verses have been freely rendered in English by him in the essays, quite often profusely and without quotation marks; some have been summarily translated, some simply interpreted, some just hinted at in passing and some not even mentioned. The work of preparing sloka to sloka translation on the basis of the Essays therefore involved a variety of processes - receiving, adopting, culling, spinning, trimming, grafting and constructing and so on - some of these process involving even risk, though each one giving a thrill. What has throughout been important to me in these processes is the scruple of being close to the Sanskrit text without being too literal, and the sense of proportion as to the size of the translation where the Sanskrit terms open large vistas with abundant meanings beyond any English synonyms. This scruple and this sense carry their merit as well as demerit; but I could not al- low liberties to myself. The whole work with all its processes has been so rewarding to me.

The notes following the translation of the slokas are all excerpts from the Essays on the Gita, with page references to the Centenary Edition. They are to my way of seeing explicative of profound truths underlying and involved in the teachings of the Gita; often they reveal the spiritual significance of things and ideas which a superficial reading of the Gita simply misses. The term 'notes' therefore fails to signify the real import or the purpose these excerpts have; they are more than notes and form an integral part of the total reading of the Bhagavad Gita in the Light of Sri Aurobindo. To the serious students and researchers these 'notes' might as well stand as inviting portals for an entry into Sri Aurobindo's Essays on the Gita and subsequently into a profound study of Sri Aurobindo's Integral Philosophy and Yoga. If the present work thus becomes an occasion for a deep entry into the Gita through Sri Aurobindo and thence into Sri Aurobindo through the Gita, I shall feel additionally rewarded.

A word about transcription of Sanskrit terms and names. Italicised script with diacritic marks as well as Roman script without marks have been adopted without rigidity, believing that to the general reader as also to the trained student that would be convenient without any confusion.

I sincerely thank the Copyright Department of Sri Aurobindo Ashram, Pondicherry for permitting me to incorporate the first and the last essays, viz., 'Our demand and Need from the Gita', and 'The Message of the Gita' from the Essays on the Gita in the be- ginning and at the end of this book, in addition to the relevant excerpts used as 'notes'. These two essays I value for this edition of the Gita respectively as the happiest introduction and the profoundest comprehensive review of the Gita. My cordial thanks are due to my affectionate friend and 'guru-bhai, my brother in spiritual fraternity, Shri Lalji Bhai for the encouragement he actually gave me in his characteristic way to get this work published for those who love to study the Gita. My words are not adequate to express my feelings.

It is really a pleasure to recollect the assistance I received from Chinmayee who went through the entire manuscript seeing it from her Sanskrit eyes, and from Stephen who did the same thing from his English sense. My loving gratitude to them is wordless. 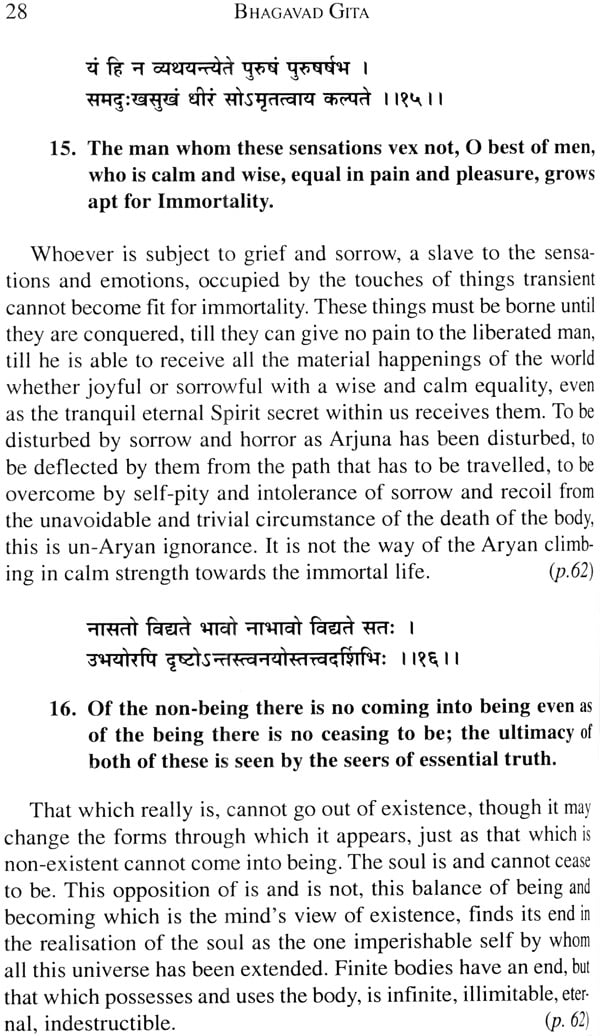 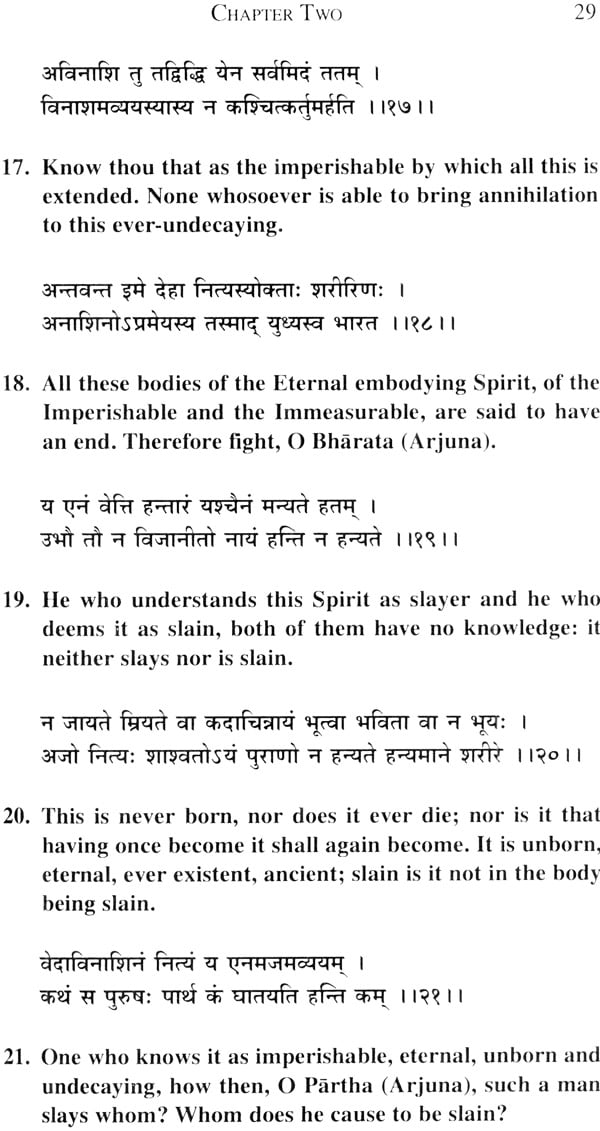 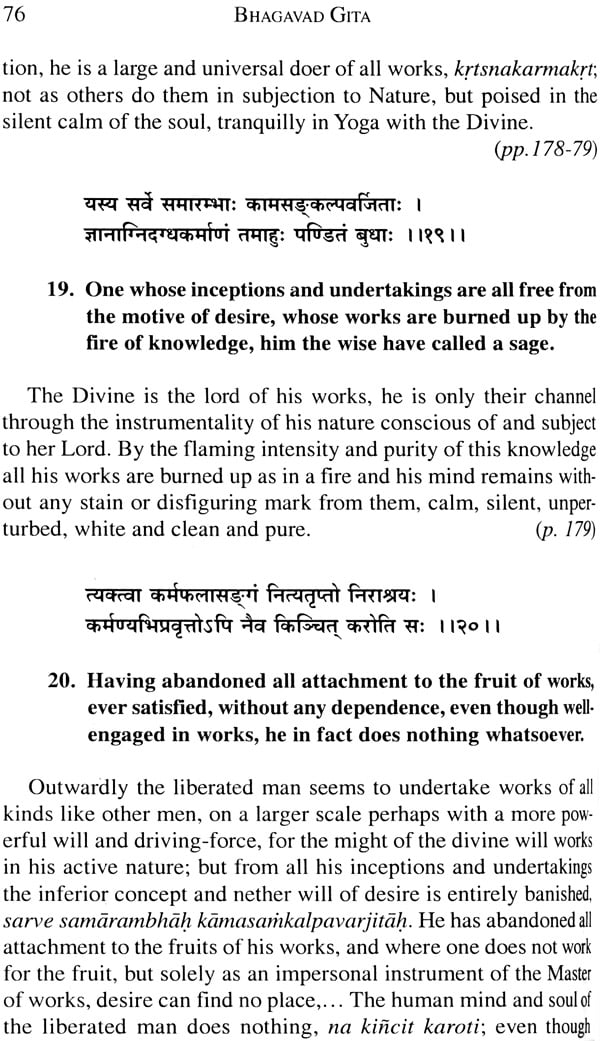 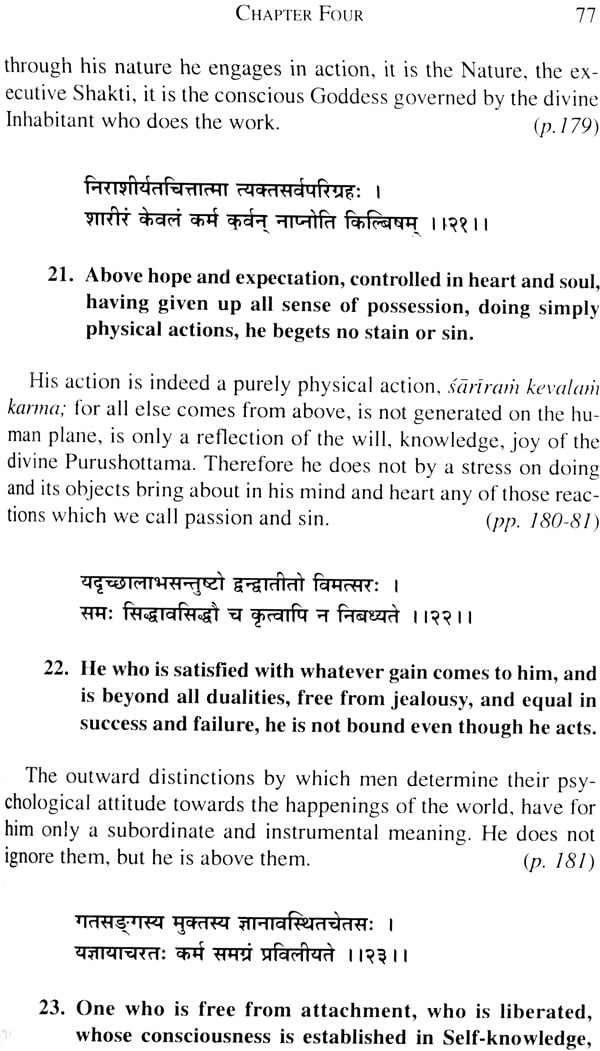 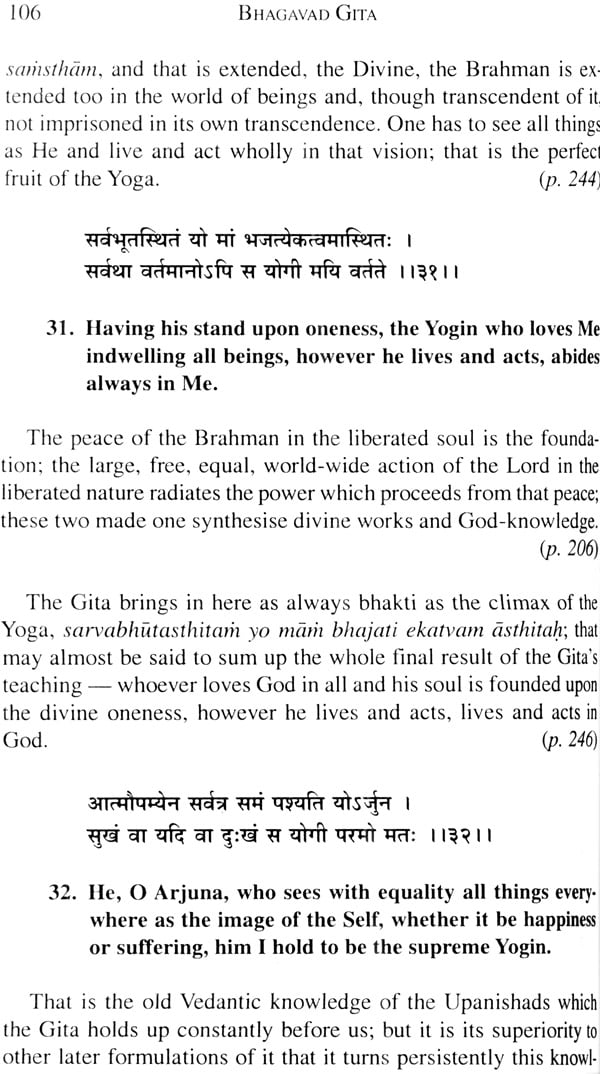 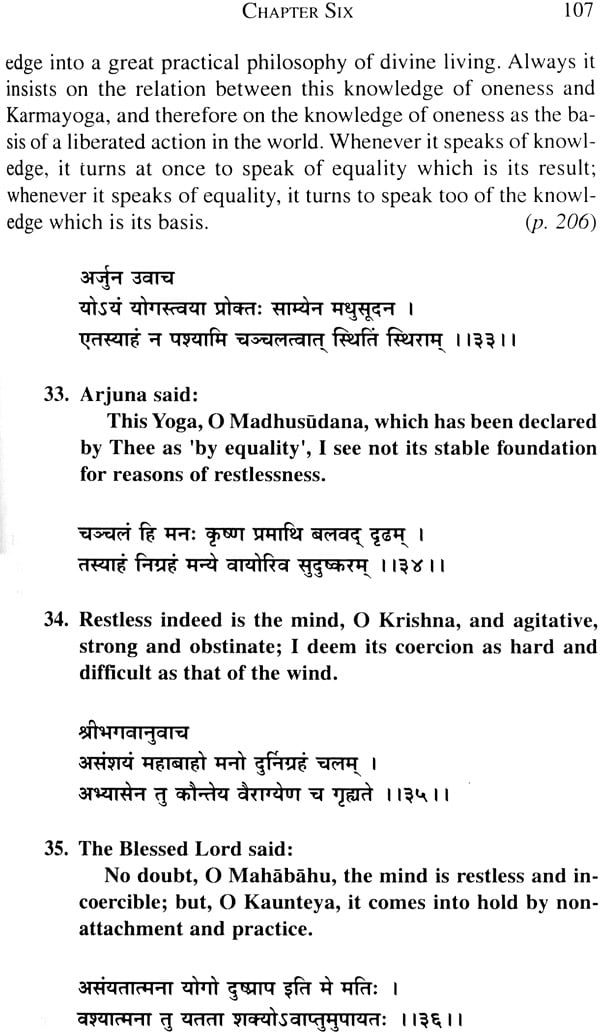 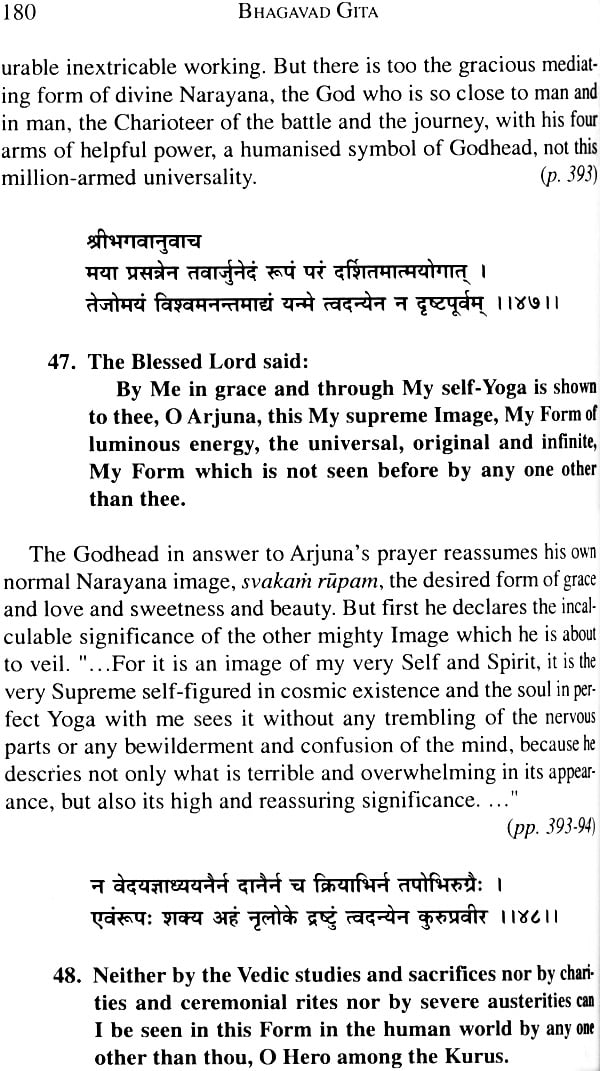 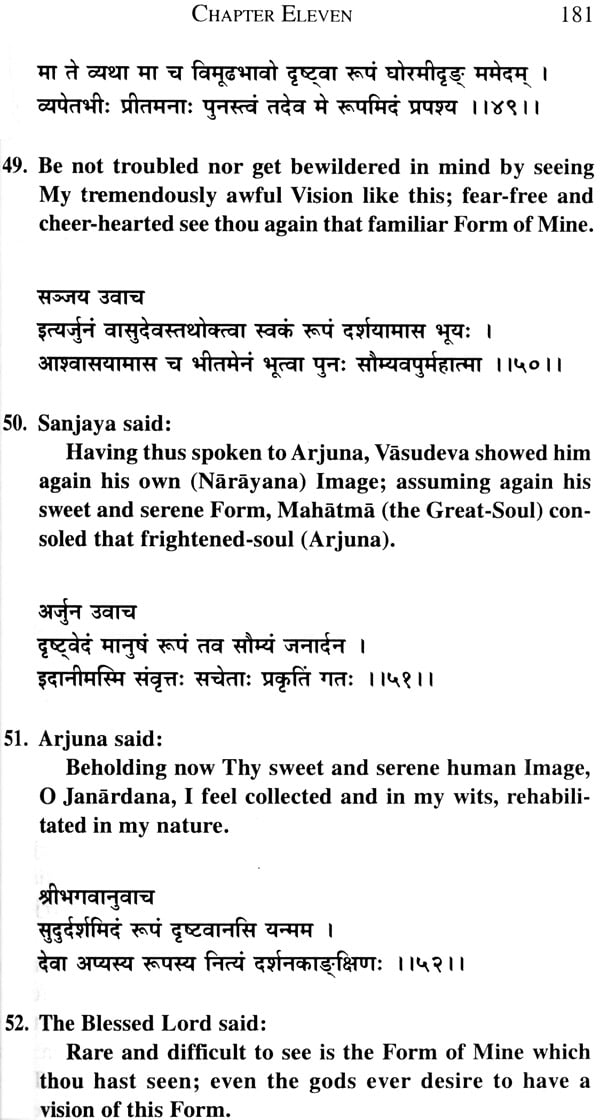 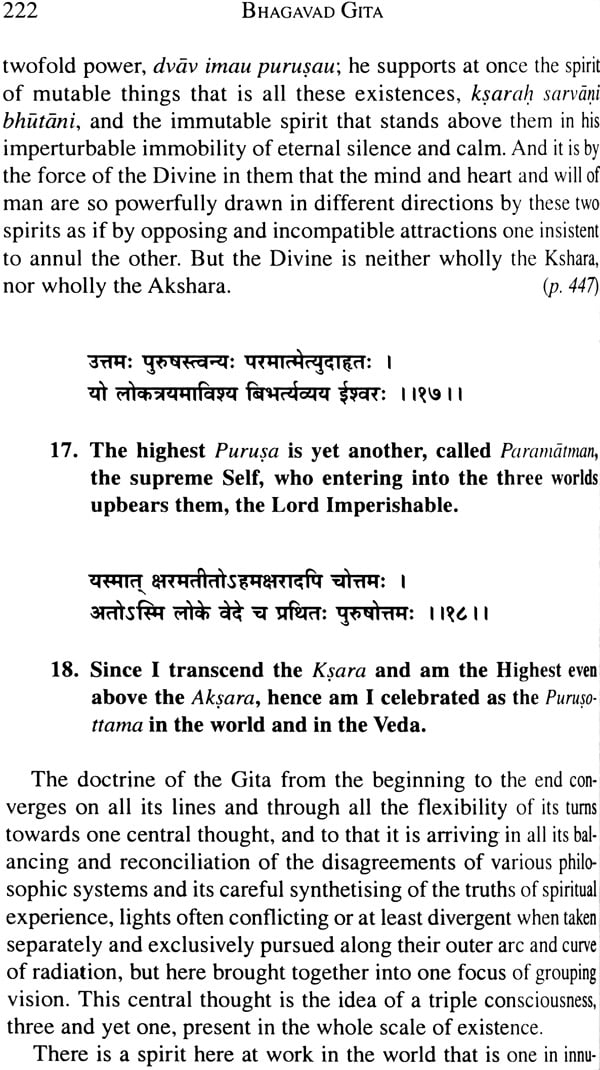 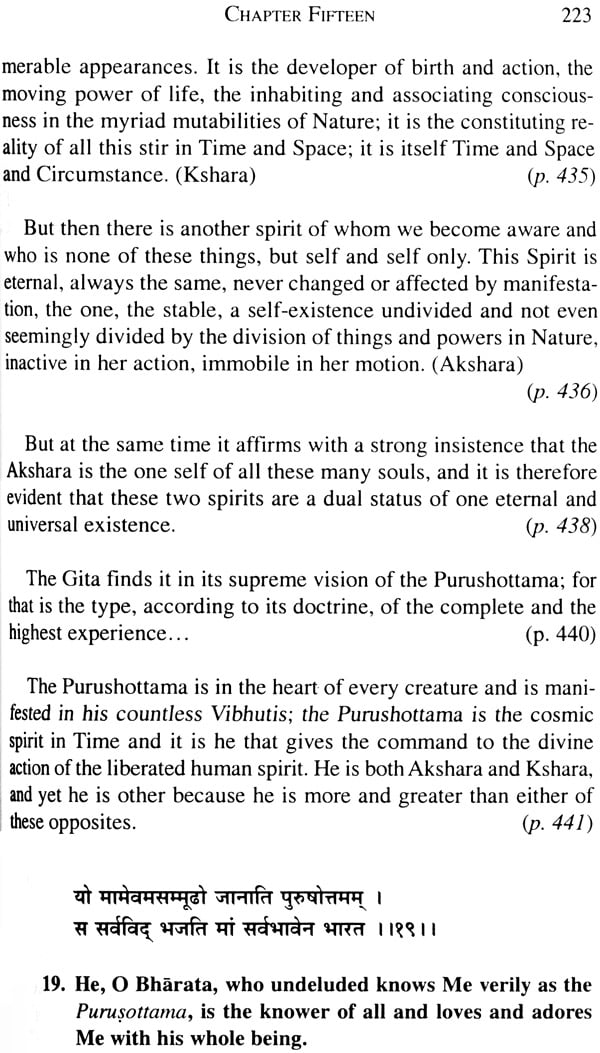 Gita Sandesh (The Message of the Gita)
By Swami Ramdas
$9

Thoughts on The Gita (A Study of Sri Aurobindo's Essays on The Gita)
By M.P. Pandit
$33
FREE Delivery

Gita for Everyday Living: Exploring the Message of the Gita in a Contemporary and Practical Context
Publisher Sri Ramakrishna Math
$16
Best Seller 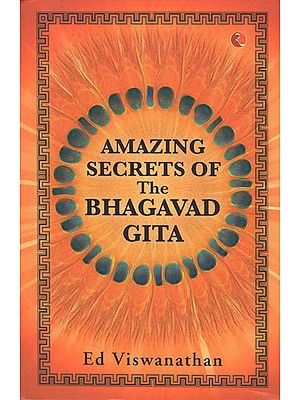 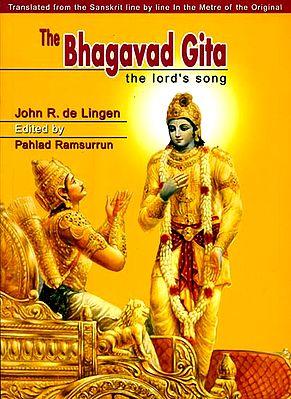