"Our law and politics, our arts and sciences, our manners and morals are derived from our fundamental faith, which makes for the spiritual unity of any community" ... There is a moral law which governs the rise and fall of nations. Adherence to the moral law of Dharma, elevates a nation: non-adherence to it, degrades it. If we are to progress we must adopt the path of virtue ... We have had in our country from the time of the Rg Veda down to our own days, a long line of torch bearers who stress the primacy of spiritual values...

From time to time this fabric of spiritual unity is reinforced by the presence and influence of poets, philosophers and saint singers whose contributions have upheld this faith. Among the composers of South Indian Classical music the great names Purandaradasa, Tyagaraja, Muddusvami Dikshitar, Syama Sastri and Maharaja Sri Swati Tirunal rank supreme over all composers at all times. This is because they were not only the great masters of the art of music but also great Bhakta-s.

The purpose of this book: i.To present the authentic text of all the so far available compositions of SWATI TIRUNAL in national, international and regional scripts viz. Devanagari, Diacritical Roman, Malayalam, Telugu, Kannada and Tamizh scripts, to reach the maximum number of people all over the world.

ii. To provide a free style gist sufficient to understand the meaning of the song enabling effective rendition. It is essential for the singers as well as the listeners to know this, in order to derive the optimum benefit from the compositions.

About the commentary: So far, in the available sources, the commentaries in English have taken either the form of an essay or the word to word translation. Though the essay type of commentaries highlights the contents of the song in an interesting manner, they are at times prone to be blended with subjective imaginations. However after comparing almost all the available important publications with us, we have prepared a free style gist as we thought appropriate. Minute care has been taken to give the meaning in the order of Pallavi, Anupallavi and Carana-s.

About the uniqueness of this Book: i. A collection of 393 compositions in one volume has been made available for the first time in Devanagari and diacritical Roman scripts with English translation followed by SRGM notations in Roman script, reaching all corners of the globe.

ii.. All compositions are presented in a format revealing the beauty at a glance of its poetical excellence of rhymes etc. besides Raga, Arohana, Avarohana, Mela, Tala and Visesha prayoga-s wherever necessary.

iii. All the songs are indexed in respective alphabetical order in Devanagari as well as diacritical Roman scripts to help quick spotting of the songs sought, at the end of the book.

About the Notation: Notation in our Indian music, however it seems to be perfect, one cannot understand the expression-the balance between the Ragabhava .and its given Sahityabhava as expressed in the con position. Infact the singer's imagination while singing counts a lot in the final and finer presentation.

My Guru used to say that only those who possess sufficient knowledge of Raga, Tala and Svarasthana-s could understand the gamaka-symbols, the underlines, the double underlines etc. For those who do not have sufficient Jnana, this symbols may fail to make any sense and, ironically, for those who have sufficient jnana, do not require any symbols at all. However the symbols have their own dignity, but also have their own limitations. Hence, in this book I have introduced a system of self-explanatory symbols which can be understood without any special knowledge of the Dasavidha Gamaka-s etc. We have utilised the symbols like subscripts, superscripts and slashes to denote the movement of the notes in the context of the Raga.

Sangita Kalanidhi Tripunithura Krishnan embrandiri Govinda Rao, who hails from a family of musicians from Kochi-Kerala, is a leading vocalist of Indian Classical Karnatak Music. In 1949 he joined the then Central College of Karnatak Music at Madras, where under the care of great musicians like Sangita Kalanidhi Tiruppampuram Swaminatha Pillai and Smt. T. Brnda, he completed the course of "SANGITA VIDVAN".

TKG was fortunate to have as his guru, the founder-Principal, Padmavibhushan, Sangita Kalanidhi, Isaipperarinar Sri Musiri Subrahmanya Iyer, the doyen of Karnatak Music. A rigorous GURU KULAVASA - training spread over fifteen years followed by many years of close association with his Guru, marks him as a faithful representative of the Musiri style of Bhava-laden renderings.

A career that spanned over five decades brought him assignments such as Lecturer, Govt. of Tamizh Nadu' Music College, Chennai; Producer-Music, All India Radio, Chennai and finally Chief Producer-Music in the Directorate-General, All India Radio, New Delhi. In addition, he had been associated with the Music Academy, Chennai, as a member of the Advisory Committee, Central Sangit Natak Akademi and the ICCR as also with Universities of Banares, Delhi, Madras, Annamalai, Bangalore and Telugu University in various capacities.

All these assignments, however, did not deter him from his prime vocation as a vocalist and teacher that took him, over the years, all over India and abroad: Sri Lanka, Singapore, Malaysia, UK, USA (S. V. Temple, Pittsburgh, among other cities), Canada and Muscat, where he has taught hundreds of students.

Titles like Sangita Kalanidhi, Sangita Cudamani, SangitaSastraRatnakara, Sangita Ratnakara (USA), GanakalaTilaka, Nadakkanal, Swara Samrat; Sangita Samrat, Sangita Acarya, Gayaka Sikhamani besides the Academi Award from the Central Sangit Natak Akademi-the National Academy of Music, Dance and Drama, and Asthana Vidvan of Sri Kanci Kamakoti Pitham have been conferred on him for his contributions to the field of Karnatak Music.

"T.K.G. is a veteran of the old school who has played a prominent role in the preservation of all that is precious in the truly classical rendition of Karnatak Music." - The renowned senior music critic Sri P.N. Krishnamurthy, quoted in the wellknown music Magazine "SRUTI".

To promote, preserve and propagate the time-tested oral traditions of Classical Karnatak Music, he founded a body named "GANAMANDIR TRUST" with the object of publishing works on music, producing audio/video CDs and cassettes in his "GANAMANDIR STUDIOS''; organising seminars and workshops on music in India and elsewhere, also providing them to the donor-members free of cost.

With this publications, TKG has completed the second phase of his project by compiling and editing all the available, authentic compositions of TRINITY of Karnatak Music, and of Maharaja Sri Swati Tirunal. Presented in diacritical Roman & Devanagari scripts with meanings in English and SRGM notations in Roman scripts, these comprehensive volumes, the common scripts help to bridge, not only the language barrier, but also the generation gaps. In this endeavour he has preserved the essence and identity of the original that remain characteristically and traditionally Indian.

Among the great composers of Carnatic Music, the name of Maharaja Swati Tirunal is placed on par with the Trinity of Carnatic Music. This is a recent developement: in my student days, in the early 30's in Tiruchi, when I used to attend every concert in the Srirangam- Tiruchi area, I had not heard a single vidvan sing any of the compositions of the Maharaja.

Sangita Kalanidhi T.K.Govinda Rao has undertaken the monumental task of assembling all these compositions in one volume, and the even more difficult task of providing notation for all of them. This is a most praiseworthy achievement.

In his preface to this volume, Vidvan Govinda Rao has recalled the role of his (and my) Guru, Sangita Kalanidhi Musiri Subramania Iyer, in popularising the Maharaja's compositions. I may recall that the very first time I heard any composition of the Maharaja was when my Guru sang the enchanting Behag krti, beginning with the words "Smara Janaka" in 1940. On more than one occasion, my Guru gave concerts over All India Radio, consisting entirely of the Maharaja's compositions. In particular, 1 may mention two Krtis, to which my Guru gave a polish in his inimitable way-" Rama Rama Guna Seema" in Simhendra Madhyamam and "Bhogindra Sayinam " in Kuntala varali. I join with Vidvan Govinda Rao in offering homage to his revered memory.

This book- I repeat- is a momumental work. Other composers await Vidvan Govinda Rao's attention. May his great work continue to be blessed and inspired by the benign grace of our Guru!

In the year 1943, Gayakasikhamani Dr. Muttayya Bhagavatar, the first Principal of the Music Academy, Trivandrum brought out, 103 compositions in two parts with notation in Malayalam script titled as “Maharaja Swati Tirunal krtikal”.

Another publication titled "Maharaja Swati Tirunal Krtimala" consisting of 101 compositions with notations in Tarnizh and text in Tamizh, Malayalam and Devanagari scripts, compiled by Rajya Sevanirata Sangita Kalanidhi Dr. Semmangudi Srinivasa Iyer, was also brought by The Music Academy, Trivandrum, in the year 1947. In its preface Sir C.P. Ramaswami Iyer has mentioned that Dr. Muttayya Bhagavatar collected around 400 compositions. Due to ill health, Bhagavatar was unable to publish all the compositions, hence, the work was in turn handed over to his successor Sangita Kalanidhi Dr. Semmangudi Srinivasa Iyer.

Later, Sri Swati Tirunal Krtis Publication Committee, consisting five members, headed by Dr. Semmangudi Srinivasa Iyer brought out two parts of publications titled" Maharaja Sri Swati Tirunal Krtis" consisting of 57 Krtis in part one and 52 in part two in the years 1970 & 1983 with notation in Tamizh and text in Tamizh, Malayalam and Devanagari scripts. Only the first part contains meaning in Malayalam and Tamizh for the 57 compositions. The number of compositions that have been published so far is 210.

" The publications of all available compositions with full notations would not only add to the musical wealth of South India but- I may say as a professional musician- is actually going to solve the problem of meeting the demand for new and veriegated compositions". These very words of my revered Guru gave impetus and provided the driving force for me, in my mission of compiling, editing and publishing the entire available compositions of Maharaja Sri Swati Tirunal which number about 400. But so far I was able to collect only 393 compositions.

Fortunately, I inherited from my revered Guru, a massive collection of many and rare music books and manuscripts, in which I found several books containing Swati Tirunal krti-s partly and a bundle of manuscripts consisting the carbon copies of already published Swati Krtis and also some of the unpublished krtis. As a serious student of music, I have gone through all the compositions of Trinity and various other composers, I can vouch that the compositions of Swati Tirunal are on par with them. They are multivarious in form and are of a high degree of perfection.

The Sahitya many times unfolds its music. The innumerable Svaraksharas- alliance of text and swara-s and Prasa- alliterations motivate one to create the music. Besides I had a close association with Tanjavur Sri Sivanandam at the time of re-printing the book on the compositions of "Tanjavur Quartette: Ponnayya, Cinnayya, Sivanandam and Vadivelu"- for editing the notations. Many of the Padavarna-s have a resemblance to the works of Swati Tirunal. This gives a feeling of assurance that the music cannot be otherwise than the way sahitya guides one. This made me set all the caranas of many compositions to music.

I can say with delight that this work gave me immense pleasure and enriched my experience. I offer my humble Pranams to Lord Padmanabha for the grace he has showered on me in completing this monumental work. I cherish my association with the Royal Family for more than five decades and I take this opportunity to thank Padmanabha Dasa H.H. Maharaja Sri Marttanda Varma and the members of the Royal Family. The grace of my revered Guru is a beacon light that is guiding me all through my life. 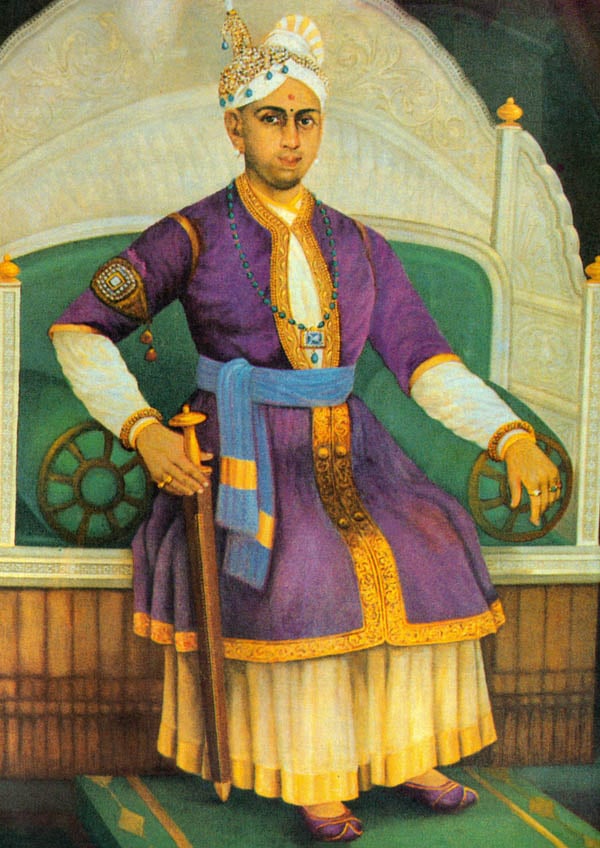 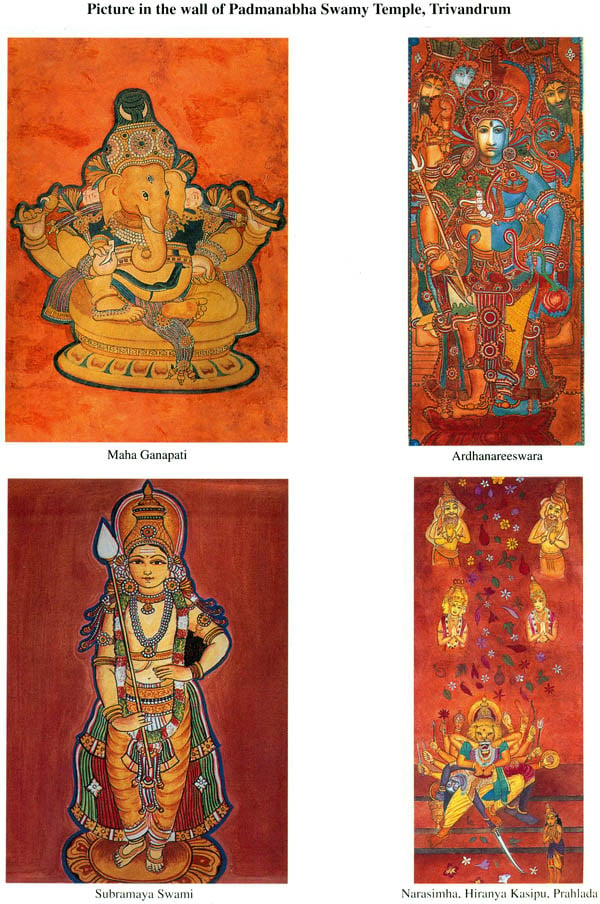 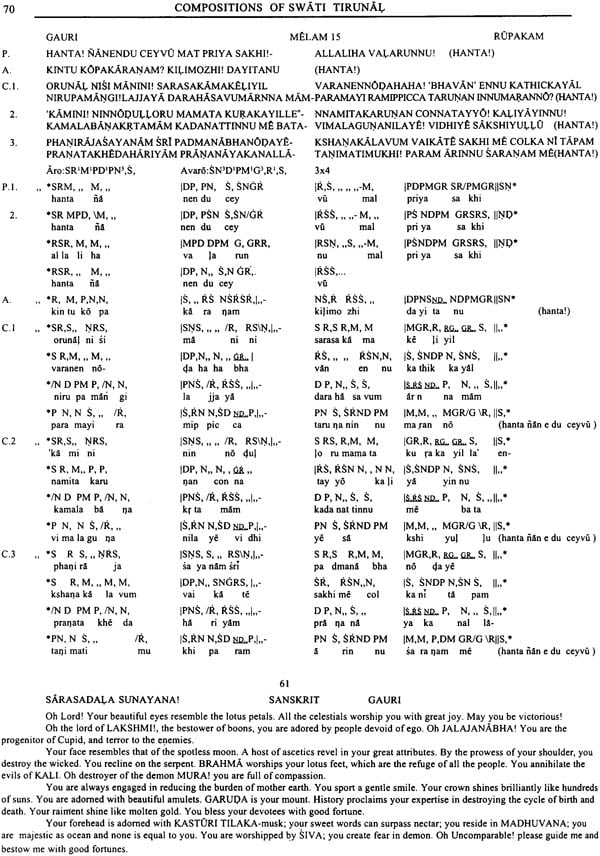 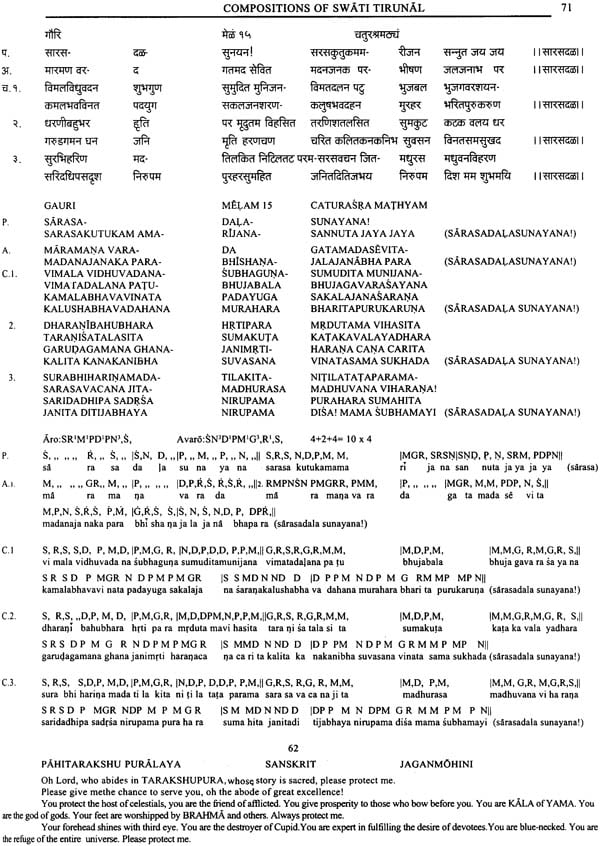 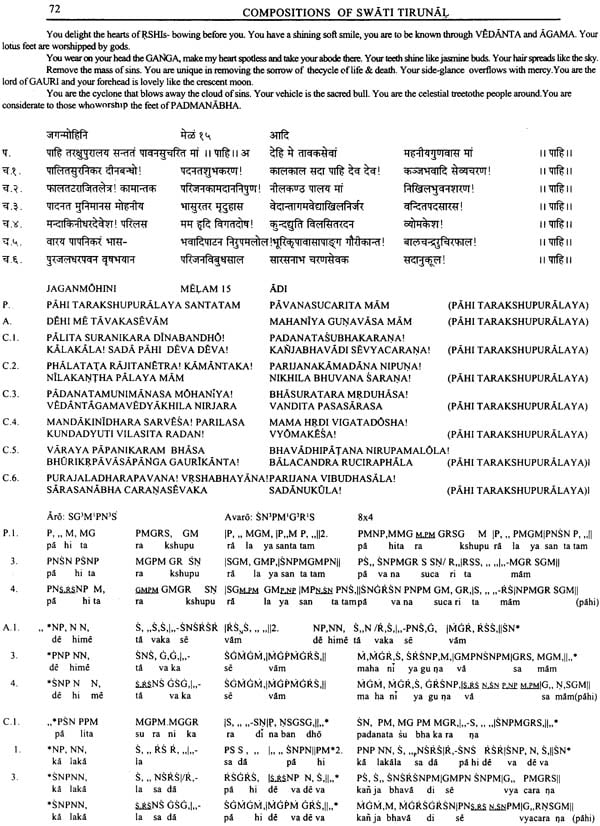 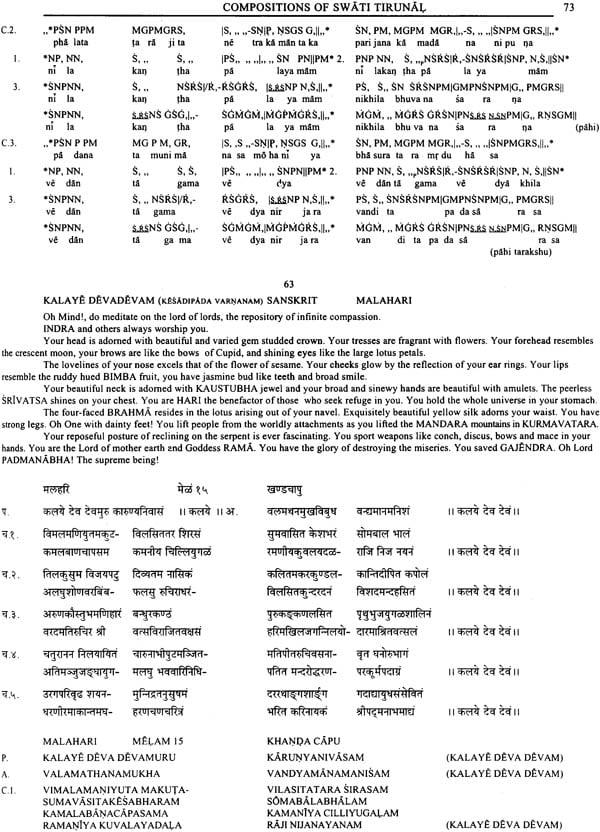 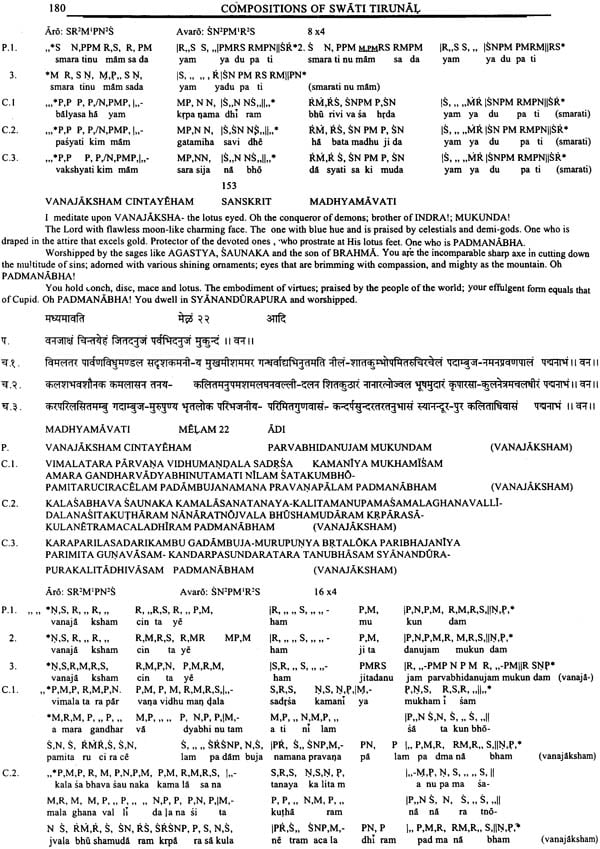 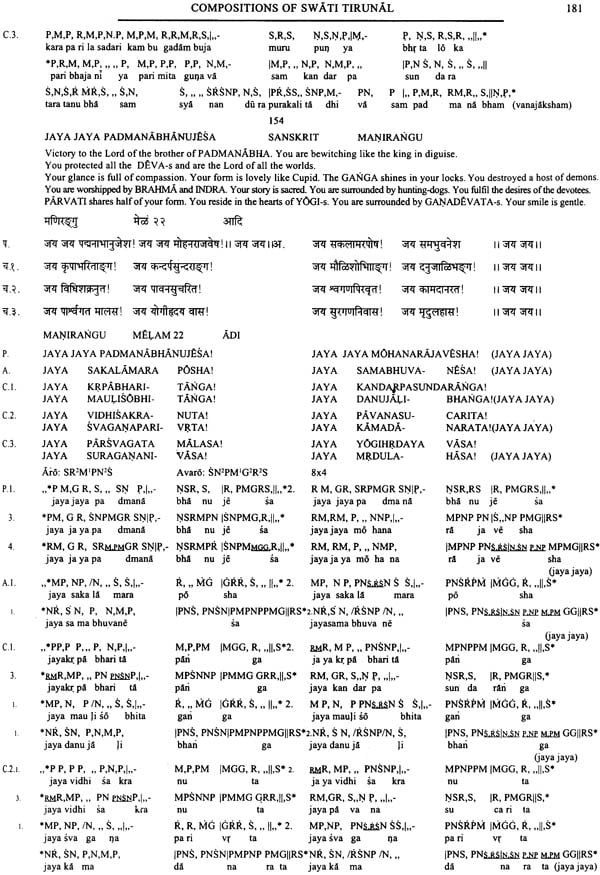 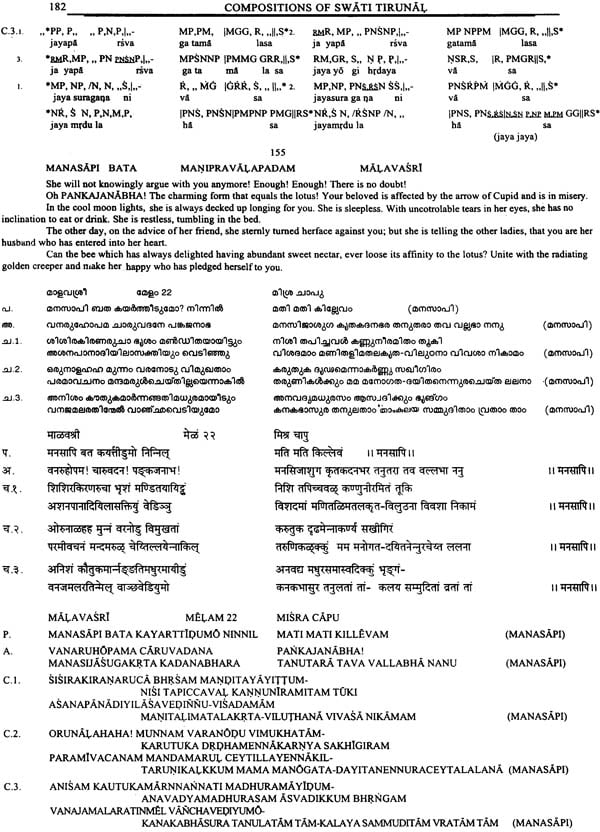 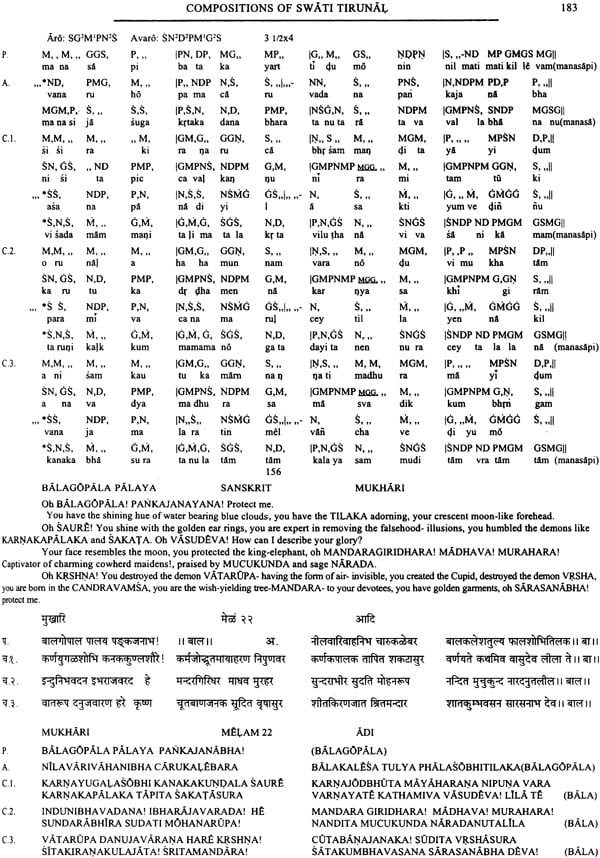 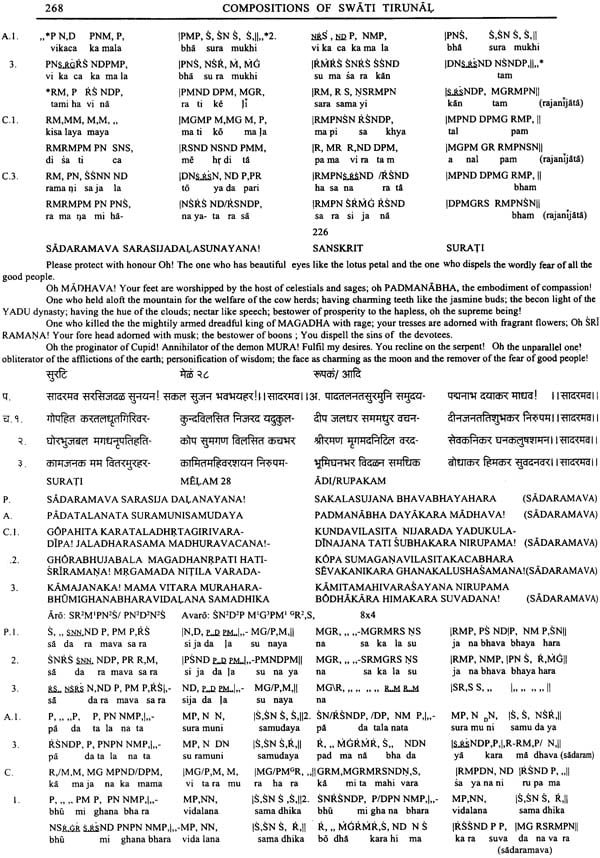 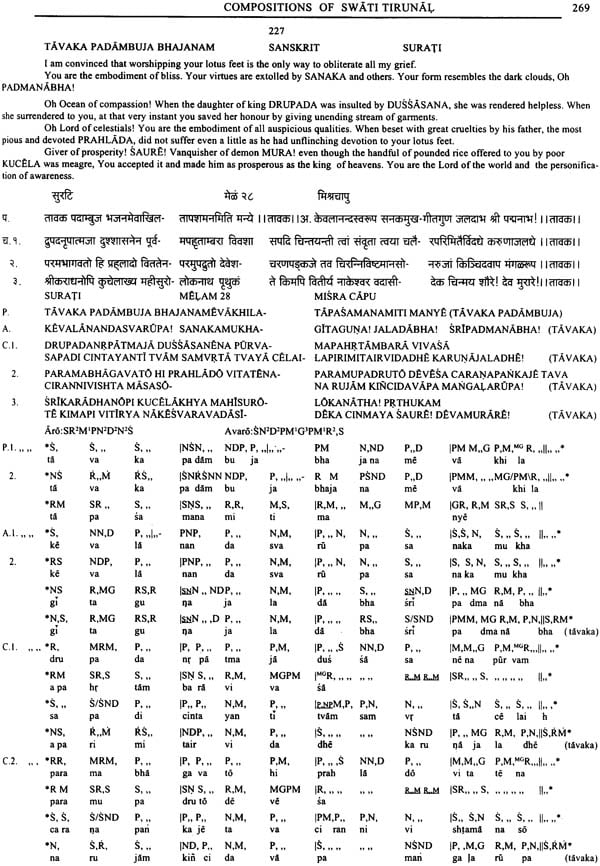 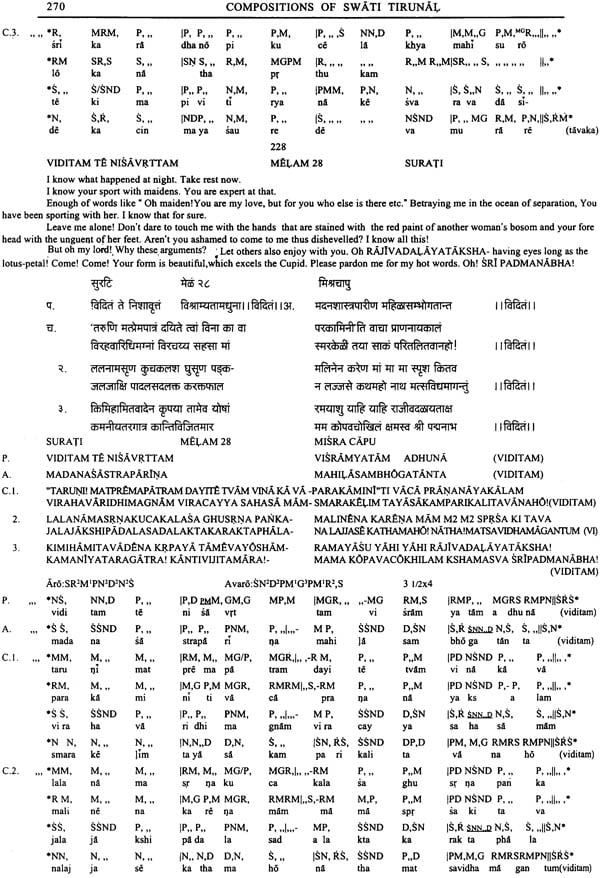 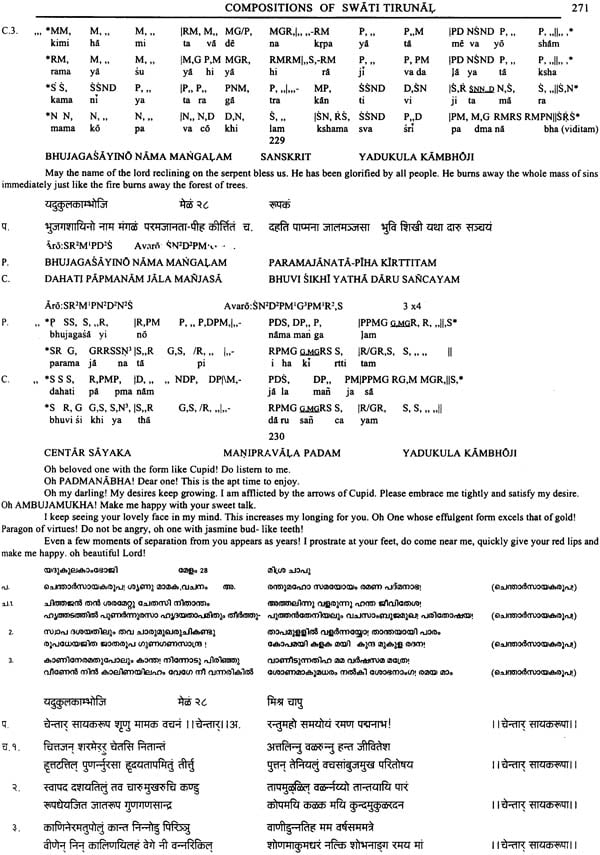 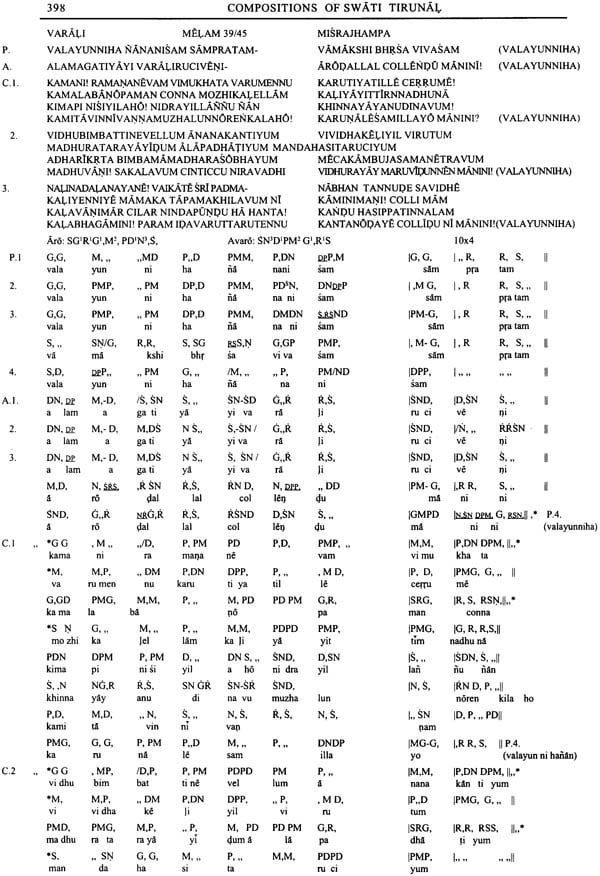 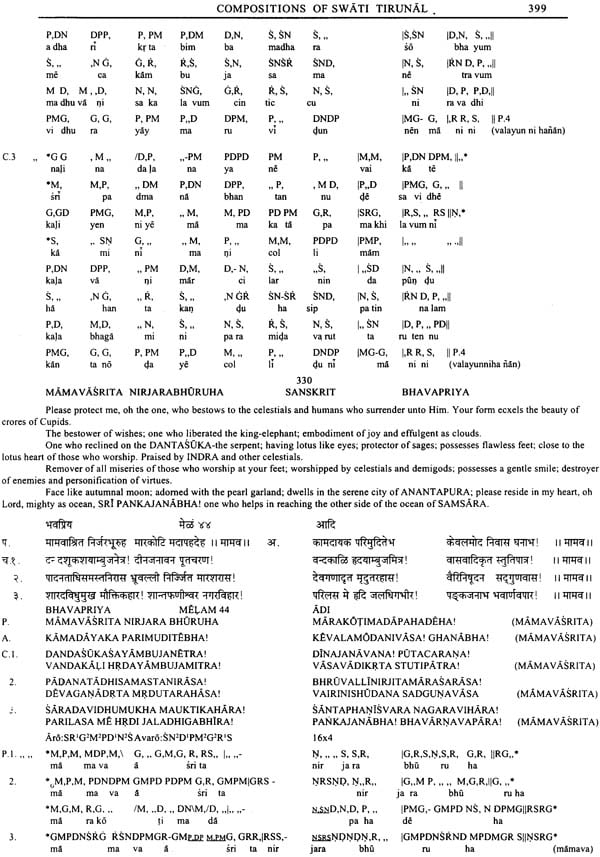 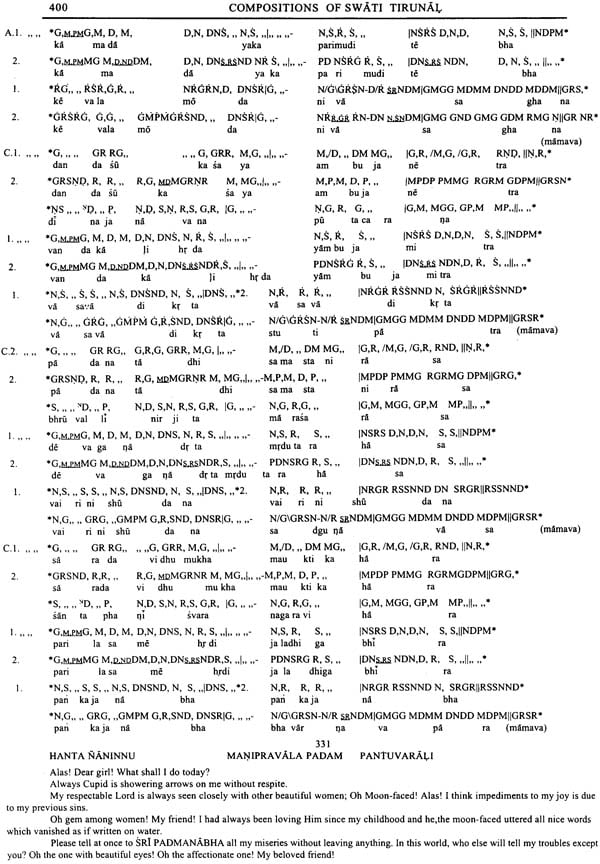 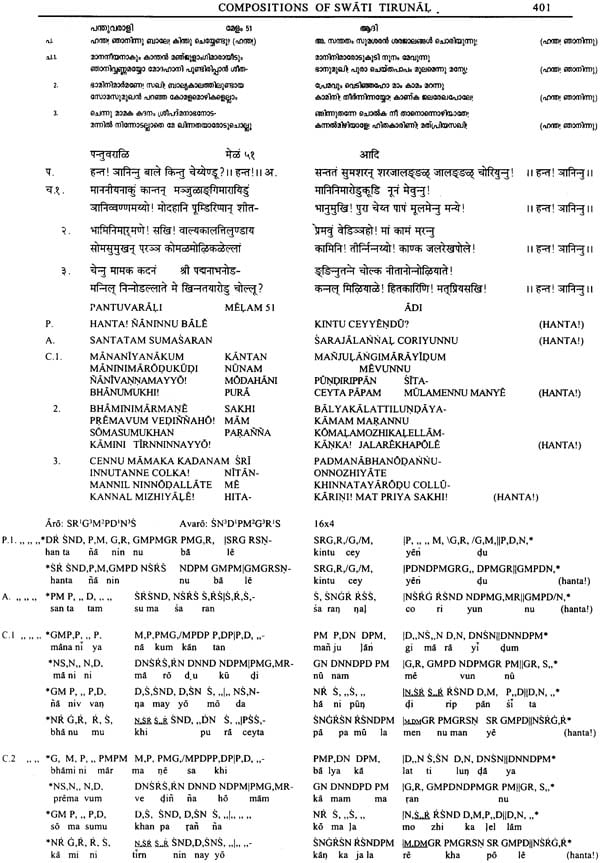 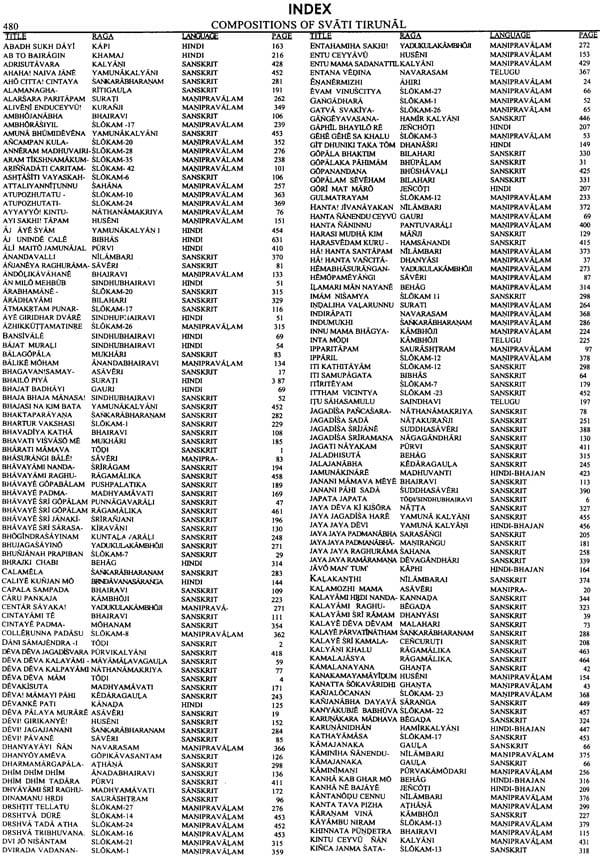 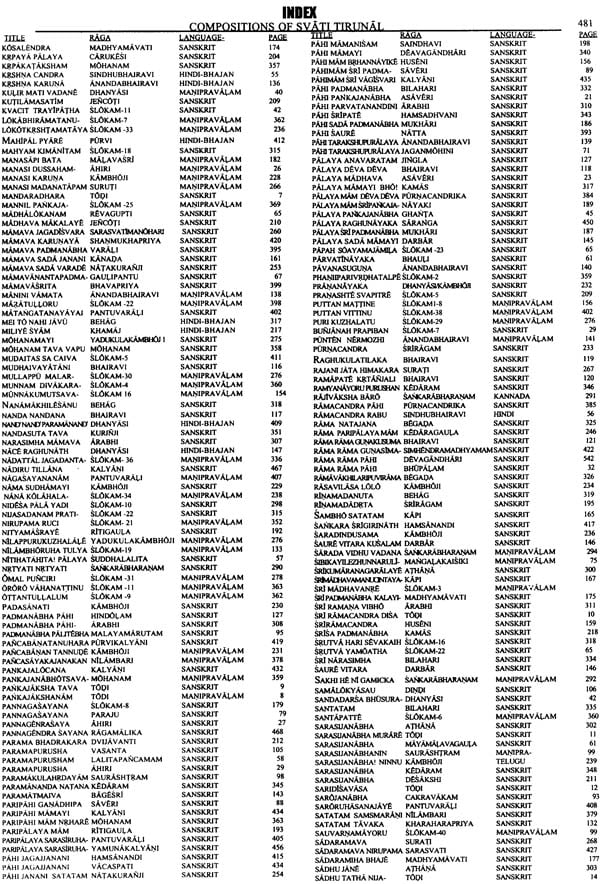 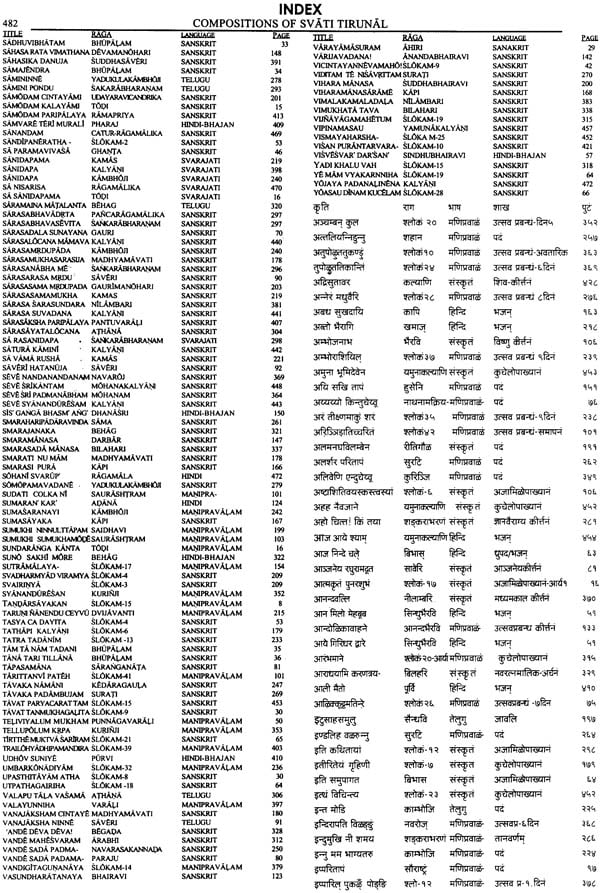 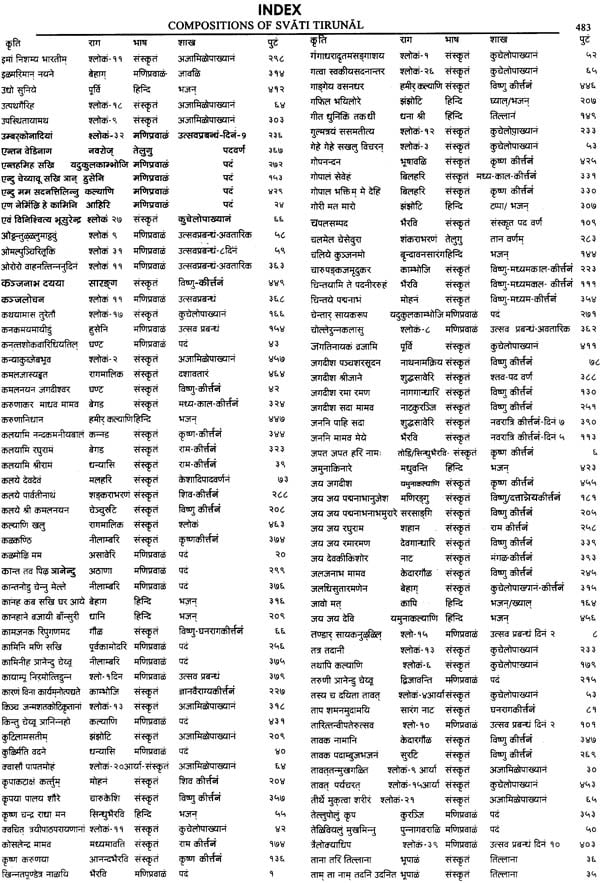