Her Story, Our Story and On the Swing (Short Stories and a Novella)

It may seem strange that Kharemaster, the first work of Vibhavari Shirurkar made available in English, is the last that this author wrote, aged eighty-eight. Kharemaster was based on a nostalgic recreation of her childhood, with only minor modifications in bio-graphical detail. This novel was a tribute to her father, who was a drawing teacher in a village near Pune. He was conscious that he was not able to play any role in social and political movements, particularly the freedom movement about which he used to read in the newspapers. Instead he decided to educate his eight children, male and female, who could then contribute to society. Educating girls was not common in those days and the facilities were not available easily. But he did educate them.

Chronologically, this novel covers the earliest period of her life. From this angle, it was as well that it was the first book non-Marathi readers could read. The present volume consists of two of her earliest works, Kalyanche Nishwas and Hindolyavar. . The first has been titled Her Story, Our Story. This consists of a series of stories about the plight of young women, who had to face various difficulties, primarily because women did not count. More-over, hardly any writer, male or female, had tried to probe into their lives. The author, then Balutai Khare, was educated in the women's college started by D. K. Karve. After her graduation she was in charge of a school for girls. As a result, she was able to listen to these sighs of young girls on the threshold of woman-hood. Kalyanche Nishwas, the original Marathi title, literally translated would be 'the sighs of the flower buds'.

The story of how she wrote Kalyanche Nishwas, why she had to assume a pseudonym (Vibhavari Shirurkar), the ire that this unknown writer had to face, has been narrated in the Introduction to Kharemaster, also published by Stree. When a new edition of the original Marathi was published by Popular Prakashan forty-five years after its first publication, the author whose married name became Malatibai Bedekar, wrote an extensive ac-count of the situation when she wrote the book. The publisher of the original edition, H. V. Mote, thought it necessary to have an endorsement. Dr. S. V. Ketkar, known as a sociologist, nov-elist and, better still, the editor of Jnana Kosh, a multi-volume Marathi encyclopaedia, was asked to write a Foreword. Both pieces have also been translated into English and made available in this volume.

The second book is a novella, Hindolyavar, that explores the man-woman relationship in this transitional period in Maharashtra. In English it has been entitled On the Swing and conveys the vacillating situation faced by the protagonist. Hindolyavar was published very soon after Kalyanche Nishwas and the uproar as well as the author's response written years later addresses both these works.

Kharemaster, Hindolyavar and Kalyanche Niswas thus provide a biography of her times, the interwar years. These were followed by Viralele Swapna (1934), a novella concerning the political vacillations of the time. After this literary spurt, the author faced much turbulence in her life. In 1938, she married Vishram Bedekar, who despite his brilliance and talent had just one play to his credit. He was already married, and had married young, as was customary. He divorced his first wife to marry Balutai. The day after the marriage, Bedekar left for En-gland for training in filmmaking, but had to return within a few months as the war clouds gathered. On his return he wrote Ranangana, a novel based on his experiences on the ship that brought him back to India.

I wrote Kalyanche Nishwas [Her Story, Our Story] nearly forty-five years ago. When I wrote it, I had no idea that my writing would turn out to be so explosive! While many from the educated middle class reacted positively to this writing, the great majority of society was outraged. Furious proclamations followed: 'The writer of indecent, obscene works such as Kalyanche Nishwas, and especially Hindolyavar [On the Swing], must be killed.' This detrimental, anti-societal act must not be allowed to go on.' Luckily, the writer was not identified. If she had been found out, society may have spared her life, but she would certainly have been forced to resign from her job. And barbed attacks would have destroyed her spirit. But since she was not identified, many derived solace from writing her obituaries. Today's readers of Kalyanche Nishwas and Hindolyavar would be surprised to learn this.

Just as tantalizing recipes are dished out to satisfy the cravings of the palate, sensuous scenes of love making, realistic or imaginary, have been depicted, using mild or lurid descriptions, by male and female writers over the past fifteen or twenty years. Hundreds of readers have relished these descriptions. And countless readers with religious leanings who found such descriptions unpalatable, have, for generations, been avid readers of the Mahabharata. Readers accepted without protest several such stories from that great epic, simply because these were hallowed by antiquity or had to do with characters that were godly. Shakuntala married Dushyant secretly in a Gandharva-vivaha; Arjun kidnapped Subhadra; Krishna eloped with Rukmini, Damayanti wrote a passionate love letter to Nal; King Shantanu married a fisher- man's daughter. Even the sages were enraptured by beautiful women. In the 1970s, Marathi readers took up enthusiastically the autobiography of a woman, which recounted her 'platonic love'.' In another instance, a mother of two left her aging husband as she loved a younger, married man. This book' described their passionate love and her disappointment when he refused to marry her; titillating the readers tremendously. Moreover, white-collar society, represented by a respectable committee of literary judges gave it a government award. Then why was this very same middle-class society shocked by Achala in Hindolyavar, forty years earlier? Why was it flustered by the emotions of love expressed by unmarried girls? Why was the reaction of some the highly-educated, respected pillars of society, so negative on read-ing Kalyanche Nishwas and Hindolyavar? Had the author writ-ten this without any basis? And if it was based on reality, why had it not become apparent to the critics themselves? Any work with a social theme is based on a frame of references to the time to which it belongs; hence these questions, and the answers that follow.

When readers suspected that Kalyanche Nishvas and Hindolyavar had been written by someone under an assumed name, many criticized simply because they were obsessed by the identity of the writer. The twenty-four-year-old, courageous publisher misled the critic, Dr S. V. Ketkar (1884-1937), to believe that the writer belonged to the Saraswat community and unknowingly irked them. The community retaliated with venom. Other well-meaning critics were angry that the writer had de-picted a picture of women that had no basis in reality. I had tried to show that older, unmarried women also experienced the human emotion of love, how that love manifested itself and how it expressed itself in different situations. Aghast at such impudence many readers went on the warpath. Why could not the critics see what the author saw so clearly?

I wrote Kalyanche Nishwas in 1933. For fifteen or sixteen years before I wrote it, I was experiencing the reality. The first twelve years of my life, that is my childhood, were spent in a village. Reformist ideas had not touched the villages. Society unquestioningly accepted both caste hierarchy and the prevalent rules regarding untouchability. At a time when even men were barely educated, the question of women's education was irrelevant. There was a village school; boys were educated till the seventh standard, and girls up to the second. Girls were married off when they were eight or nine. Moral taboos were rigidly followed. Religion had a tremendous stronghold on society. But even during such stringent times, covertly, many startling events took place. This writer lived in the brahmin neighbourhood. She heard the hushed whispers of elders discussing the startling news that spread in their community. And that piqued her curiosity.

A brahmin, who earned his living as a priest, had kept a woman. Another enterprising brahmin had his eye on a widowed school-teacher whom he finally 'brought' to his house. A schoolteacher's wife had just given birth to a baby. Her widowed sister had come to assist them. Soon the schoolteacher made her pregnant. Al-though the village mocked her, she considered herself guiltless and would come boldly to the common tap to get water. A young daughter-in-law used to 'serve' her father-in-law from four in the morning till daybreak. The other women made fun of her, sarcastically, because of this. A husband was angry with his barren wife. It was rumoured that she drank the urine of a buffalo everyday in order to become fertile. Several men had their eyes on this good-looking woman, wishing to father her child.

In short, at the beginning of the twentieth century, no matter how strict the rules, how stringent the ideas of good and bad, no matter how strong the hold of religion, even in a village, some men and women could not control their basic earthy instincts. Society disapproved, sneered and ultimately ignored these things. This writer was too young to understand the significance of everything, but she could not avoid hearing about these. When her sensibilities were awakened as a writer, she began interpreting these events.

In 1917, I went to Hingane, near Pune, and joined the educational institution founded by Maharshi Karve. Hingane was a world by itself. The students-widows and unmarried girls-both young and mature, representing every caste, came from all over. They came from traditional homes, moulded with strict discipline. In the open, free atmosphere of the boarding school, along with academic education, they learned about the current political and social movements from renowned people working in those fields. They learnt from reformists like Lokahitawadi (someone who worked towards people's welfare), a pseudonym taken by the leading reformist Gopal Hari Deshmukh, to Guruvarya Karve himself, who worked ceaselessly to improve the terrible conditions faced by women. In those days caution and decorum was instilled in every aspect of a girl's behaviour, even in the way she walked. Now, for the first time in their lives, girls were free to play with abandon physically active games like hututu, langadi and khokho. In this enlightened, educated environment, all such positive things made a great impact on their young minds. At the same time many things talked about in hushed whispers also left their mark.

Once, around eight at night, the girls were studying in their rooms. Quite against the rules, an older girl was burning scraps of paper out in the courtyard, weeping as she did so. One by one, the girls noticed what was happening. They tiptoed out of their rooms and watched. Then a girl divulged the secret. 'You know what? They say she wrote a letter to her teacher. And matronbai found it.' Although some of us were too young to realize what could be the nature of that letter, the older girls and the widows found no reason to hold back. 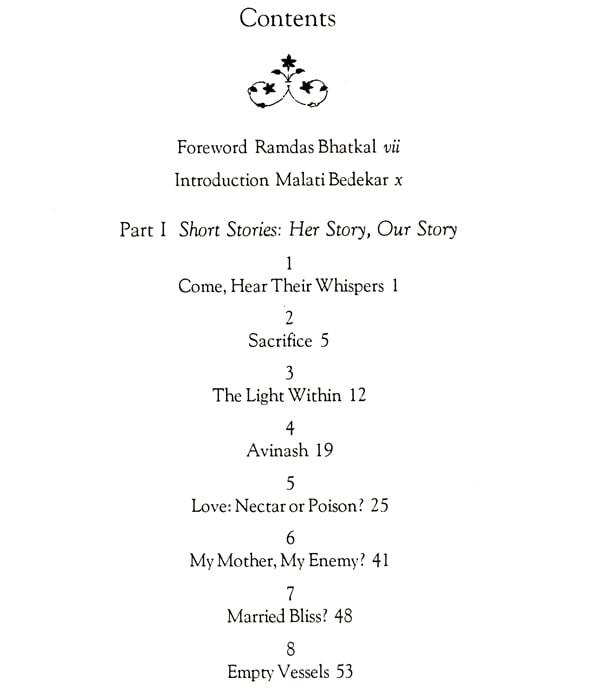 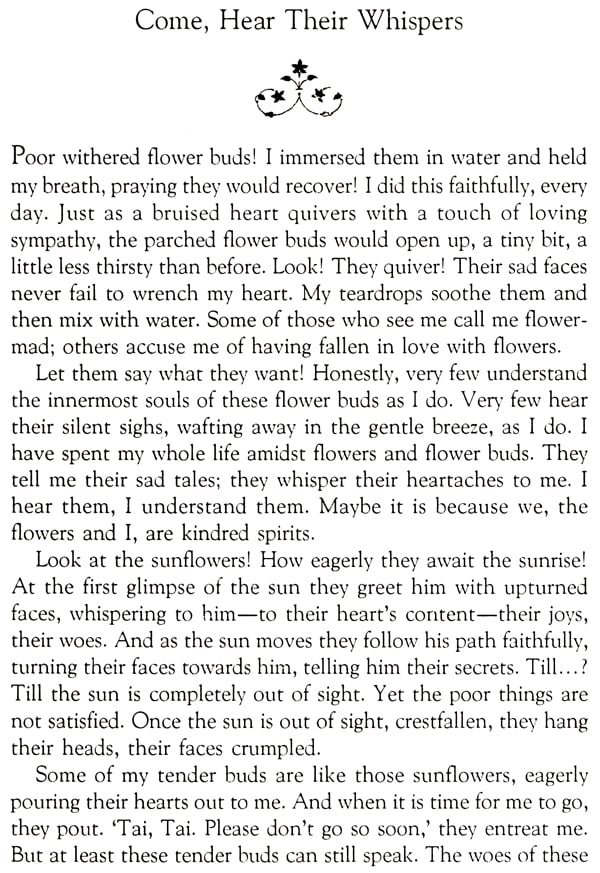 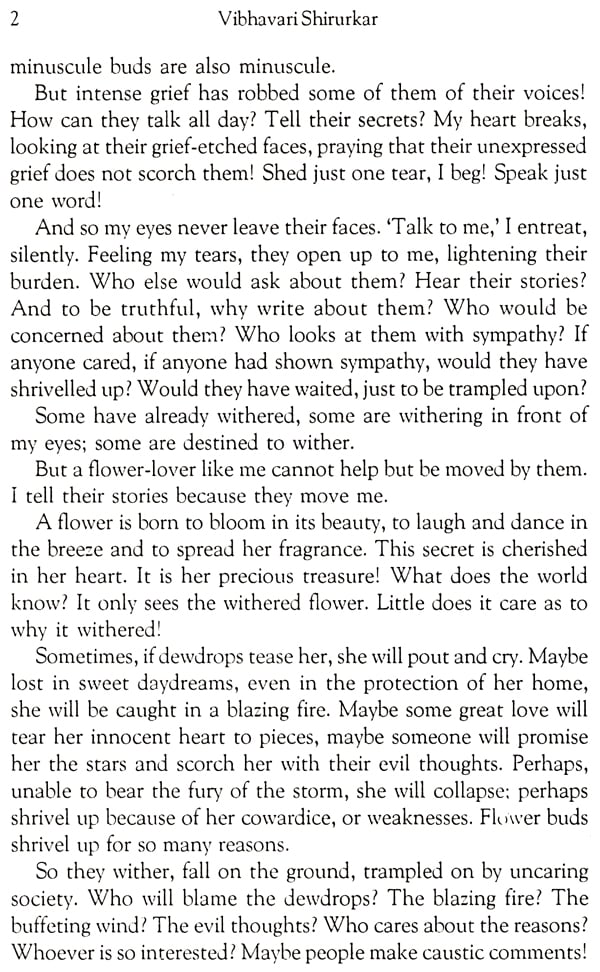 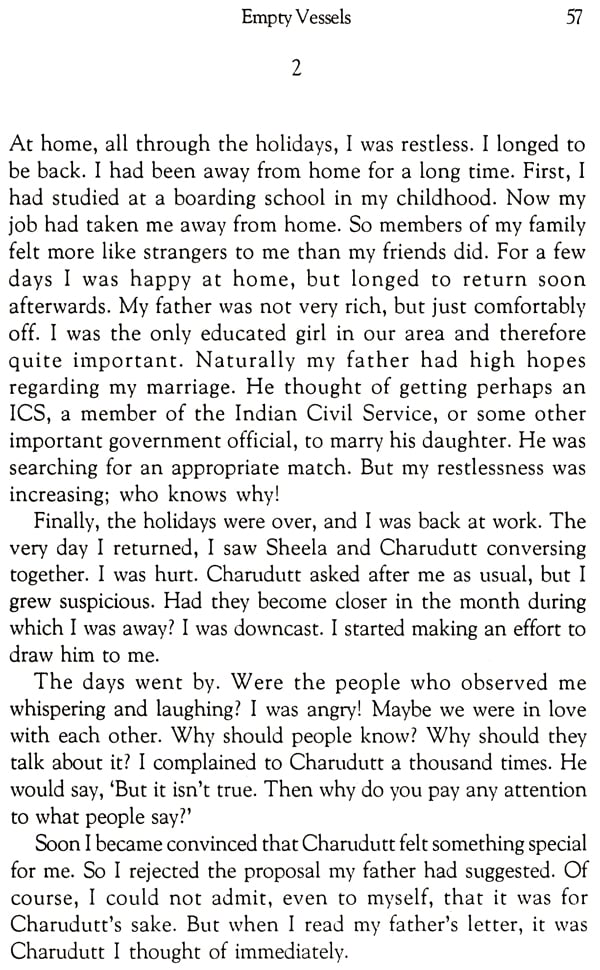 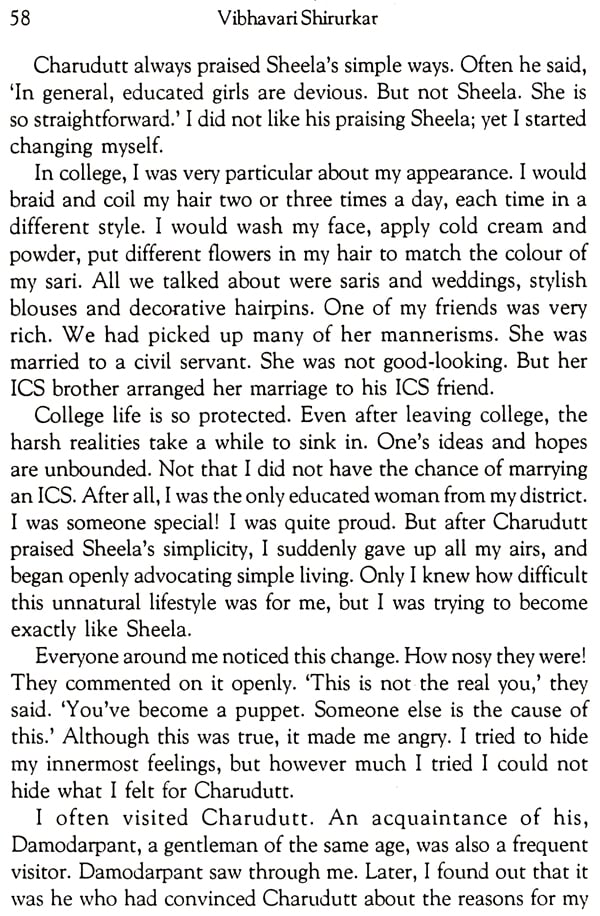 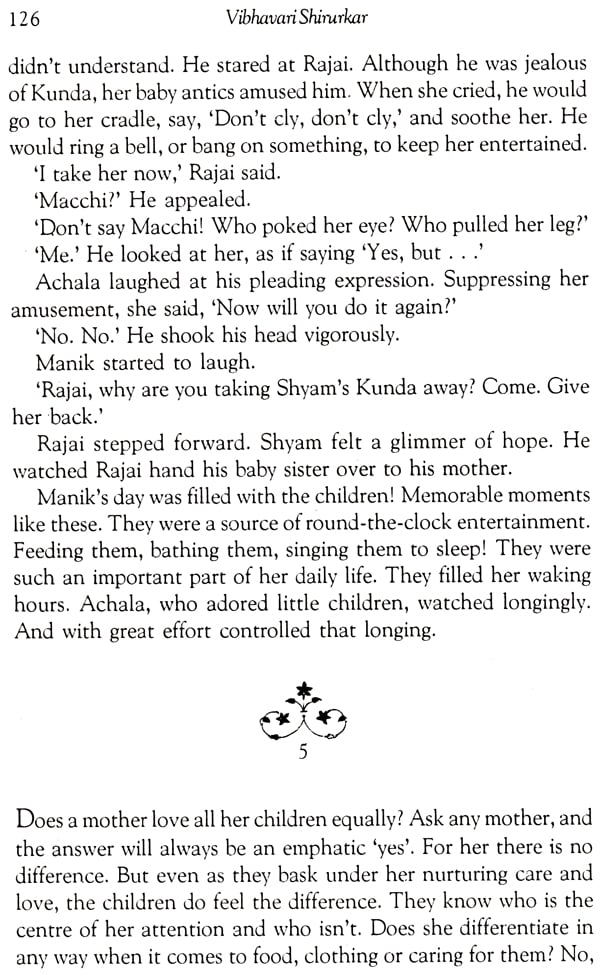 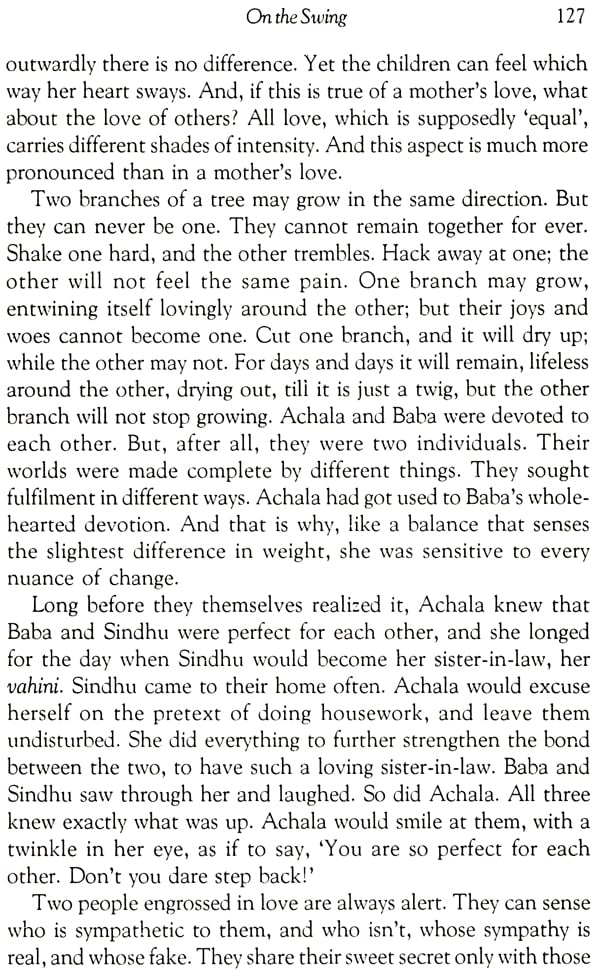 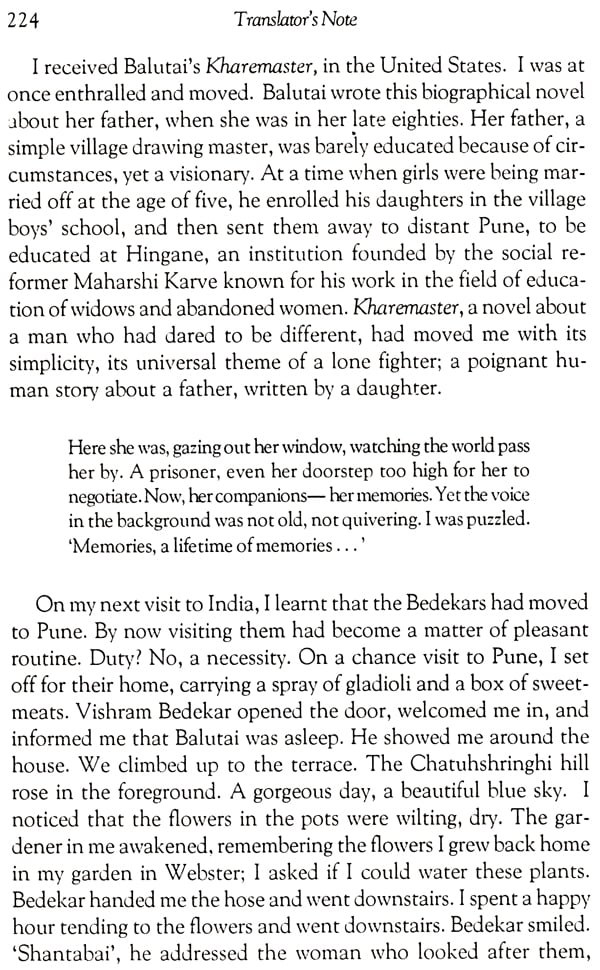 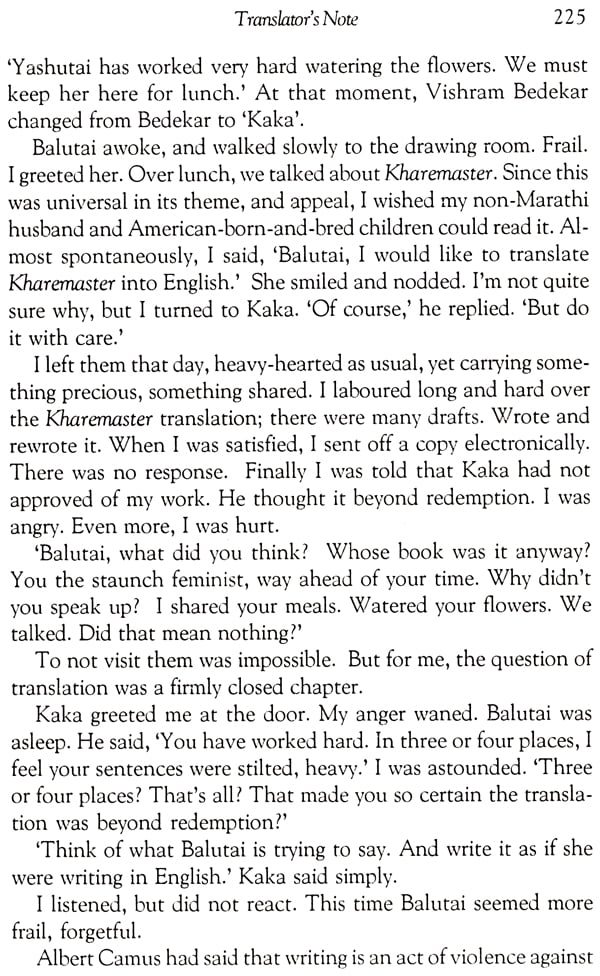 Short Stories for Children
By Sudhir Roy and Geeta Verma
$11