$17.50
Quantity
Ships in 1-3 days
Notify me when this item is available
Introduction
“You should compile these together in a book!” This simple “mantra” offered by Yadunatha dasa, an enthusiastic subscriber to my online journal, struck a chord. He was referring to my “Japa Thoughts”, my personal realizations on how to enter the holy name, a popular entry often found in my journals during the Indian lunar month of Karttika.

Every Karttika since 1974, with the exception of two years, I have resided in Vrndavana, the sacred land of Lord Krsna. Like many Vaisnavas, during that month I take a vow to substantially increase my daily spiritual practice by increasing the time spent in japa meditation. Since 2000, however, I have spent Karttika not only in Vrndavana, but have live at the foot of Govardhana Hill, the most hallowed ground within the greater Vrndavana area. It is at this time that I decided to write my realizations on how to more deeply enter, to become absorbed in, japa meditation. In one fairly recent journal entry I shared the basis of such realizations:

“What is a japa realization? It is the recognition of the obstacles that block us from attaining our next level of meditation and the form of mercy necessary to help us reach beyond those barriers.” (November 1, 2006).

In my previous book, Greetings from Vrndavana, some of those realizations were listed, but the last entry was from 2003. Since then I have spent four more Karttikas in Govardhana where each year I have recorded any where between 15 and 25 realizations on entering the holy name.

Although my most inspiring japa realizations have been during Karttika, good japa is not limited to a specific time of the year. A separate section near the end of the book, “Throughout the Years (2000-2007)”, thus lists my meditations from various time during those years. To end Part II of the book I added some “Final Thoughts” based on a lively discussion I had on the relation between humility and individuality in chanting the holy name.

I hope these meditations serve as an impetus for the reader to go deeper, to unlock, so to speak, absorption in the holy name. I also discussed this in a recent meditation:

“I want entrance into the holy name. What is the door? It is only our particular attraction to Sri Krsna. While chanting I thus search for my taste – the particular manifestation of the Lord that will evoke devotion and open my heart. I first pray to Sri Guru and the Vaisnavas and progressively reach the lotus feet of Sri Rupa Gosvami. I think of his Samadhi at Radha Damodara, his bhajana kutira at Tera Kadamba; I sing his song (Sri-Rupa-manjari-pada) and meditate on the special mercy he received from Sri Caitanya Mahaprabhu. Today my taste rests there. The door opens. I gain entrance into the holy name. (October 13, 2006).

One good fortune of living in a sacred place, especially Vrndavana, is the association of deep sadhakas (spiritual practitioners) that often reside and visit there. It is by their association that I am guided in my own meditation. After being inspired to write this book from the simple message “Your should compile these together in a book”, it dawned on me that if some were inspire me. I thus decided to ask these devotees if they would agree to be interviewed on how they enter the holy name. I was doubtful how successful I would be; serious sadhakas who reside in Vrndavana are very busy in namabhajana and other devotional practices. However, not one person refused my request!

For my interviews, I first visited Vrndavana, where my friends Samapriya devi dasi and her husband Dhruva Maharaja dasa reside. Samapriya devi dasi discusses how the instructions of Srila Prabhupada are the basis of entering the holy name and can inspire one to go deeper. Based on 35 years of steady commitment to the practice of japa, Dhruva Maharaja disa suggests a lifetime plan to gradually increase one’s dedication to the holy name.

Sacinandana Swami discusses how to conquer the mind on the basis of Sanatana Gosvami’s Hari-bhakti-vilasa and then offers his personal realizations through a metaphor describing nama-bhajana as a sacred expedition.

Aindra dasa talks about the spontaneous nature of nama-bhajana, how the “sweetest of sweetest cowherd boys” strongly desires to “pasture on our tongues” in response to “our heartfelt feelings towards Him”. Parthasarathi dasa Gosvami gives a comprehensive recommendation on increasing the quality and quantity of chanting by understand nama-tattva and meditating on Gaura-lila.

When I visited the asrama of Mahanidhi Swami at Sri Radha-kunda for a scheduled interviewed, he humbly handed me a short handwritten explanation of the essence of his japa-chanting in the mood of giving pleasure to Radha-Krsna-which is included as his offering.

I thought it would be also helpful to add some younger and newer voices on chanting. Nityananda dasa, who studies and teaches at the BBT Sanskrit school in Govardhana, shares his struggles to enter the holy name and the reciprocation he experienced from Sri Sri Gaura-Nitai when chanting in the mood of gratitude.

Bhurijana dasa, a senior disciple of Srila Prabhupada, wrote a short essay for Japa Meditations entitled “On Improving My Japa”. By reference to the Bhagavatam, Bhaktivinoda Thakura, and Srila Prabhupada, he discusses chanting in the mood of helplessness and lamentation as the key to improving japa.

During the interviews I appreciated how each serious practitioners chose to highlight a different aspect of their practice for the benefit of others. Niranjana Swami talks extensively of how the cultivation of humility and gratitude increases attentiveness in chanting by making japa more relevant to

Srimati dasi offers several key realizations to overcome lifeless chanting, most important nama-kirtana in the association of advanced devotees. She also stresses the inspiration one gains in japa by seeing nama as a “person with deep emotions”. Kesava Bharati dasa Gosvami also describes chanting in an intimate mood by using the simple technique of focusing on vibrating the holy name from the heart.

Upon returning to America this year, I found a resurgence of interest in japa meditation, especially at the Bhaktivedanta Asrama in Manhattan. Although the original intent of my book was to focus on the sadhakas in Govardhana, I realized that it was important to interview some of their monks. Radha Vallabha dasa, a senior brahmacari there, guides the devotees in japa reform based on a booklet he wrote, Japa Reform Handbook. I asked him to summarize its theme, the science of changing habits as applied to japa. He also graciously gave permission to reprint the core of his handbook in the Appendix. Yajna Purusa dasa is the humble leader of the Bhaktivedanta Asrama. Despite his many responsibilities, he reserves one day a week exclusively for nama-bhajana. He describes the impact of his commitment both on his own spiritual life and on those whom he serves.

All of the interviews were kindly transcribed by Sudevi dasi, who studies and teaches at the Bhaktivedanta College in Radhadesh. Inspired by the interviews she began to transcribe lectures by her spiritual master, Rad-possible inclusion in the book. Maharaja discusses how one’s sincere desire to purify oneself and serve humbly is not only the difference between hollow ritual and genuine devotion, but the key to pure chanting itself.

After the book was already completed, I unexpectedly came across two more important contributions to japa reform. They were too significant to neglect. Mahatma dasa gave me permission to reprint an article he had already published about his realizations as the main facilitator at the Bhagavat Life Japa Retreats. Hari Kirtan dasa shared with me his copious notes from those same retreats. As these two late entries weren’t technically interviews, or direct responses to my inquiry about entering the holy name, I have included them in the Appendix.

Several of the devotees who expressed their realizations about japa talk about the need for gratitude. Indeed this book is only the mercy of the Vaisnavas. I have no taste for nama-kirtana outside of their continued association.

I also remain indebted to many devotees who assisted me in the completion of this book. I am very grateful to Sastra dasa, who again generously bore the full expense for the production of Japa Meditations as he did for Greetings from Vrndavana. I have a new editor, Kadamba Mala dasi, who made very good suggestions to improve the text of Japa Meditations. I am relieved that again I have the help I need to ensure a polished final text. This is the third book, after Waves of Devotion and Greetings from Vrndavana, designed by Jal Keli dasa of Bluefuse Design. His work on my first two books has been lauded for excellence. I am fully confident details in book publishing from production to distribution. For that I remain reliant on the very appreciative of the able assistance of Rathi Krsna dasa.

Especially I can never sufficiently express my gratitude to Srila Prabhupada. He not only gave me the holy name and the practice of japa meditation, but continues to sustain and deepen my practice by his mercy.

“My experience is that chanting is not a matter of simply endeavouring to articulate some syllables. Actually, such chanting is not really chanting. Chanting looks like chanting, but actually chanting is Krsna dancing. By His own sweet will he is making His divine descent from Goloka-dhama and dancing on our tongues. The holy name is a beautiful, sweetest-of-all-sweetest cowherd boy. He is a cowherd boy, a beautiful, blue cowherd boy, handsome and completely captivating to the heart. By the mercy of Hare, Radha, our hearts have become undeniably, intensely enchanted by the sweetness of that little cowherd boy Krsna, and because we have become enchanted by Him, and He is aware of that, naturally, he won’t leave us alone. Again and again and again He pastures on our tongues, by forcing His way into our consciousness, dancing on our tongues.” 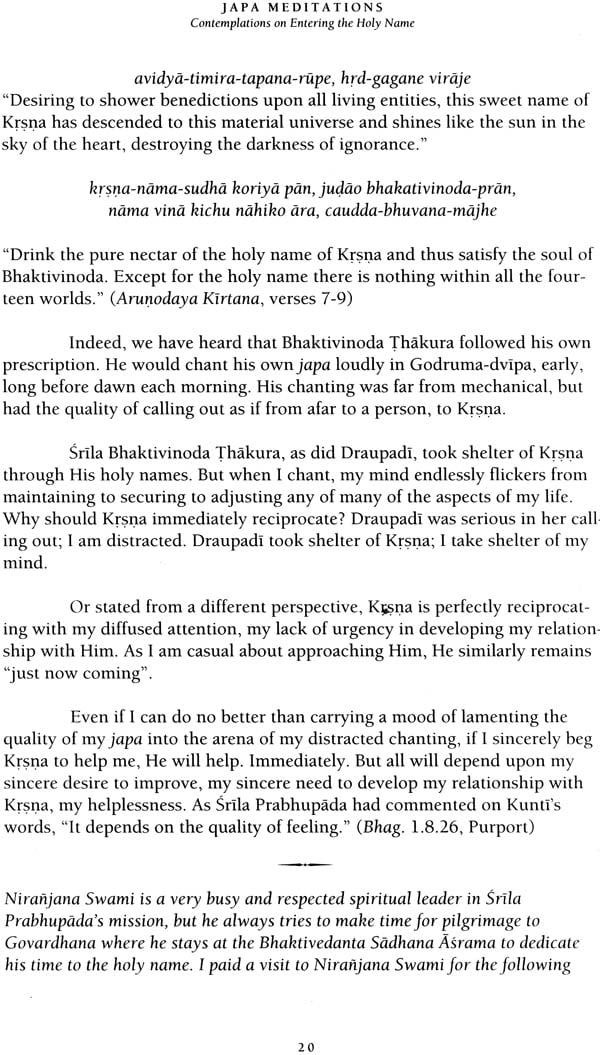 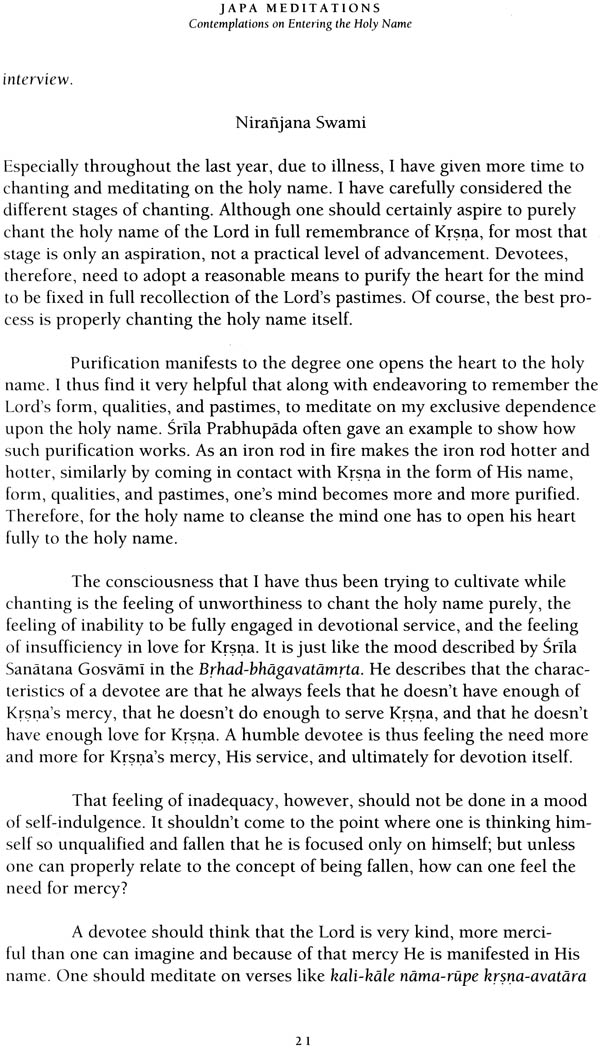 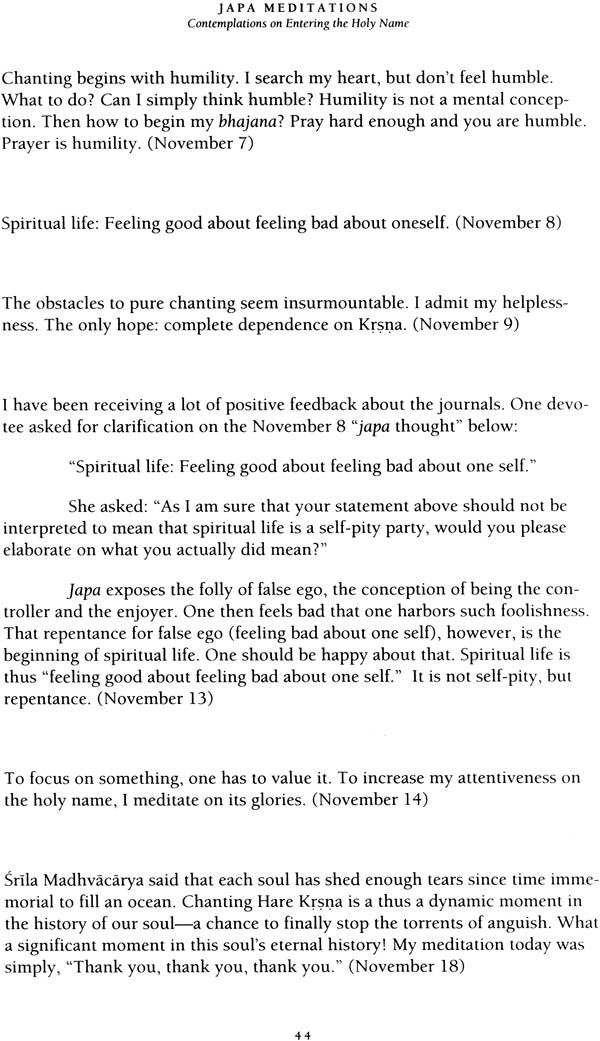 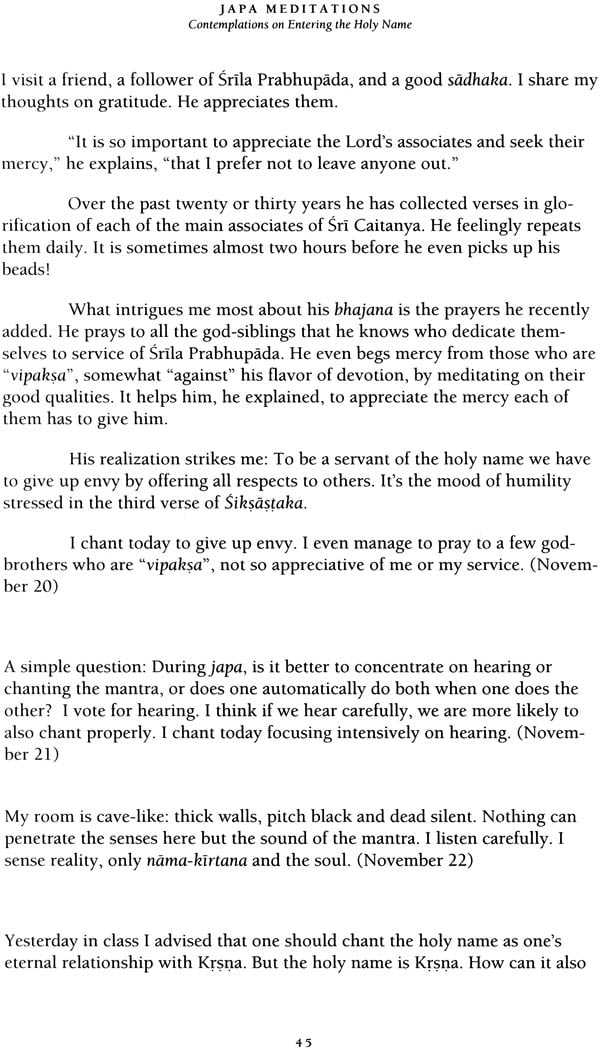 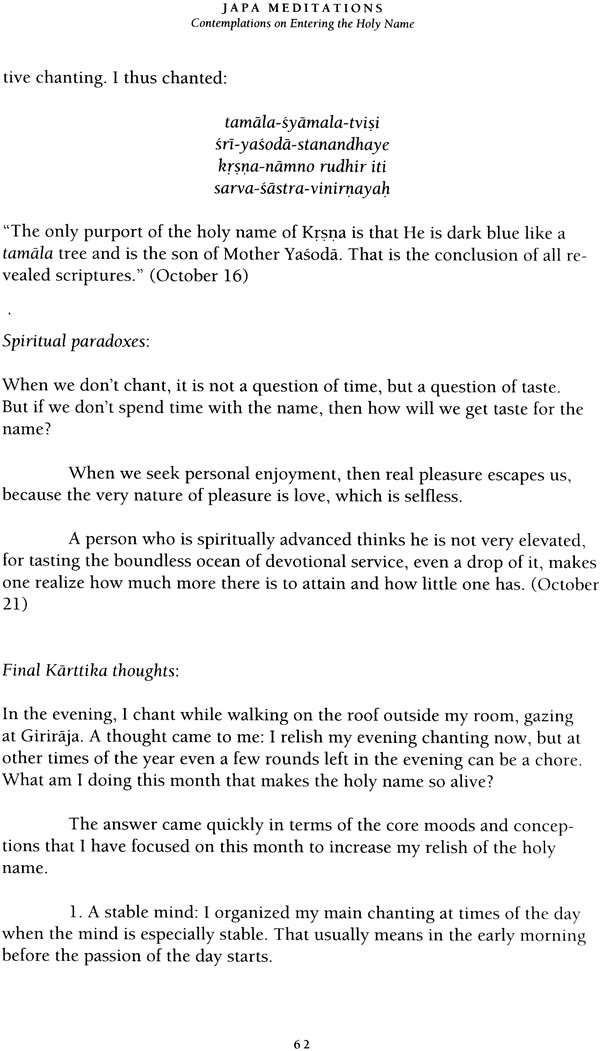 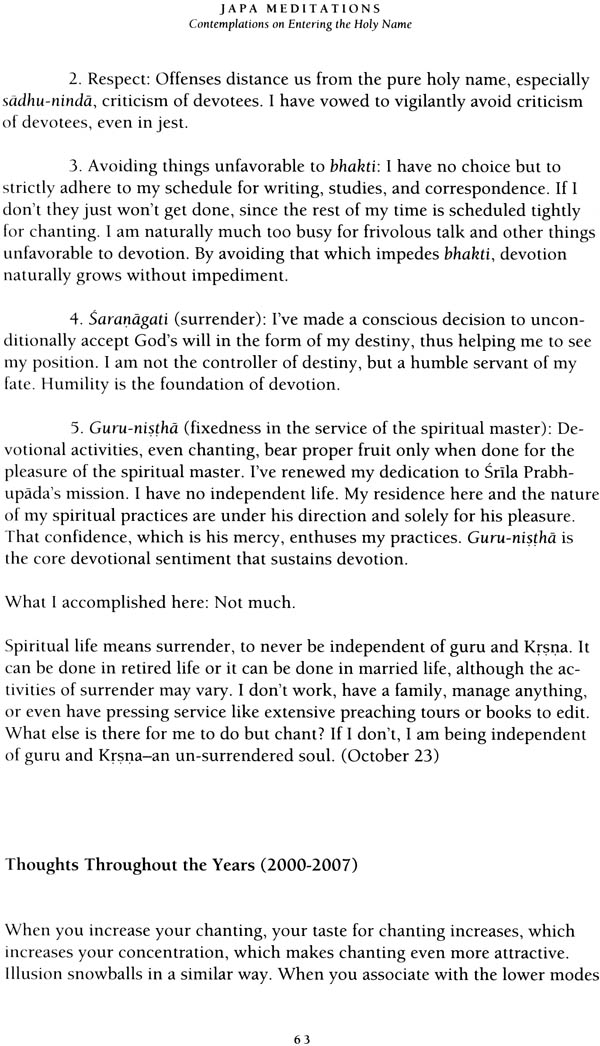 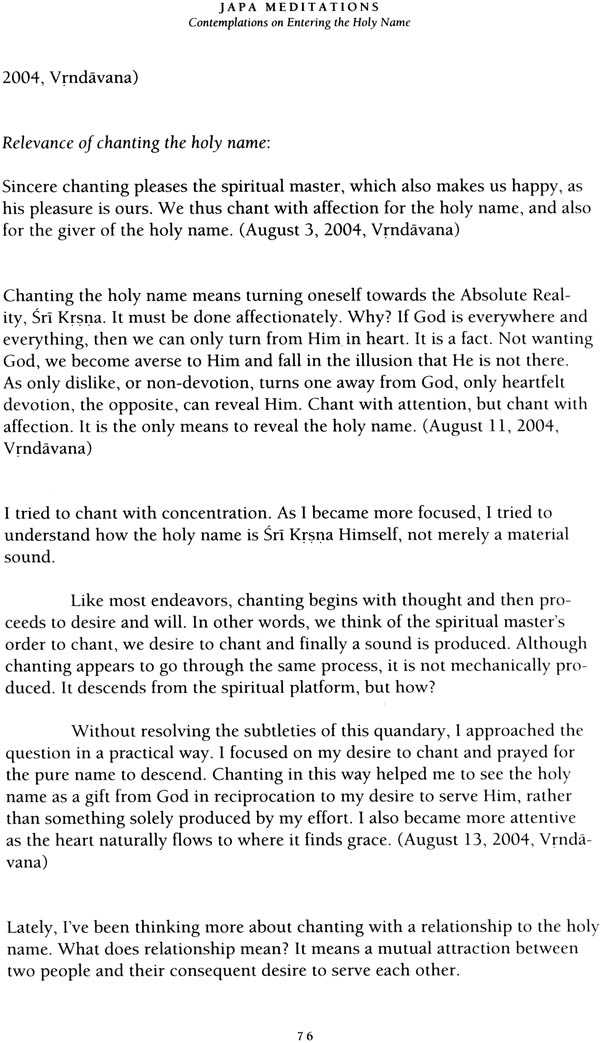 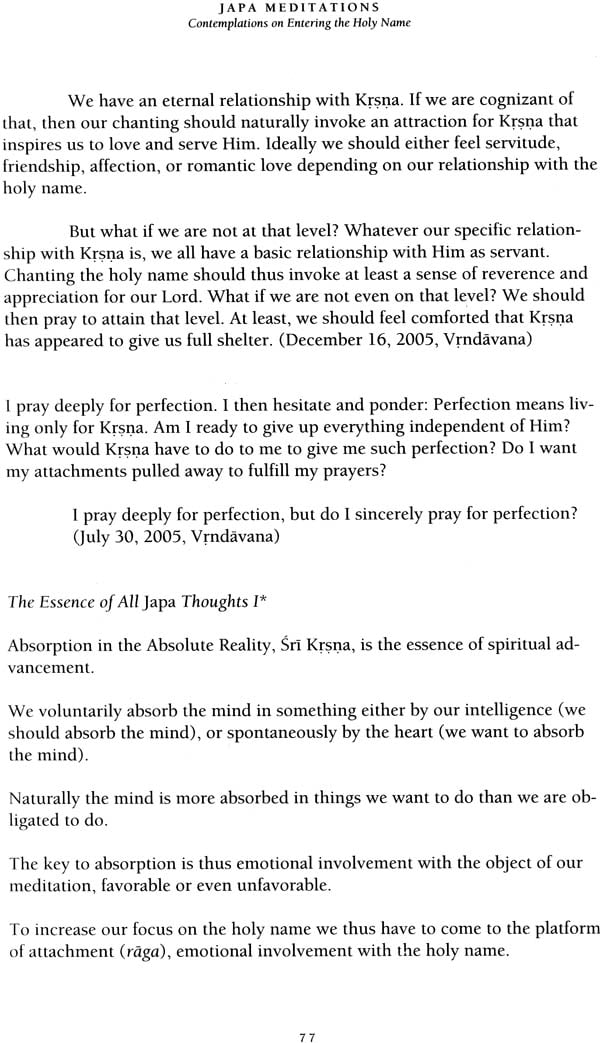 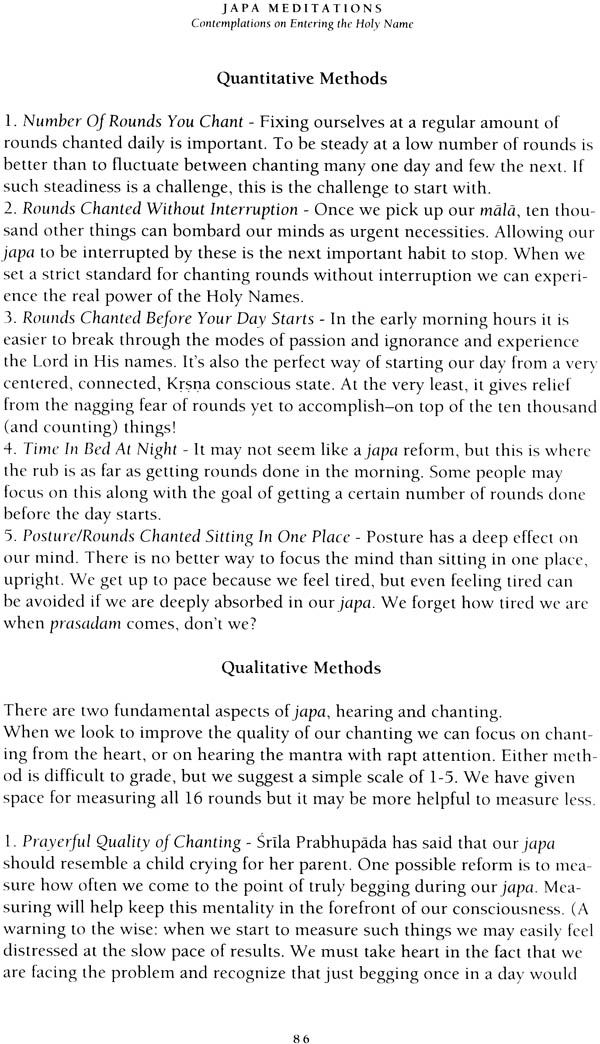