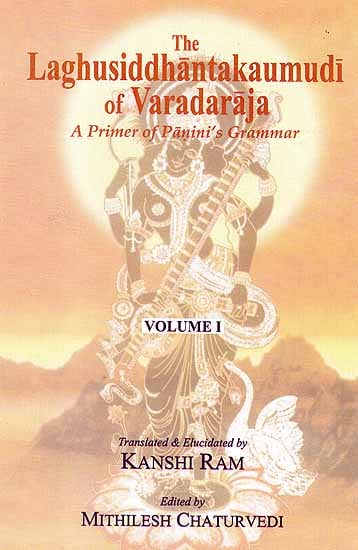 Varadaraja wrote the Laghusiddanta-kaumudi, a short version of Bhattojidiksita’s Siddhantakaumudi, in order to inculcate an ability in beginners to gain access to the Astadhyayi as he claims in the invocatory verse. This work, which is the first of the three-volume project, covers 371 sutras on samjna, sandhi, subanta and avyaya prakaranas. It includes the translation of the sutra and the vrtti on it by Varadaraja, which is followed by the paraphrased sutra in which padas are kept in nonsandhi form. The carried over padas are given along with the sutras from the Astadhyayi from which they have been carried over. In the elucidation that follows the paraphrase, the meaning of the sutra and the vrtti thereon is explained in detail. Relevant grammatical aspects have also been discussed so that some light is thrown on the depth and nuances of vyakarana-sastra. The present work fulfils a compelling need for a detailed commentary on the Laghusiddhantakaumudi in English.

Kanshi Ram taught Sanskrit at Hans Raj College, Delhi University, for 36 years till he retired as associate professor in 2007. He studied the texts like the Mahabhasya, Vaiyakaranabhusanasara, Sekhara, Nyayasiddhantamuktavali, Vyaptipancaka with Mathuri, Citsukhi, etc. with traditional scholars like late Pt. Shri Vedananda Jha. He has had the opportunity of discussing the intricacies of Advaita Vedanta and Nyaya with Swami Divyanandaji Sarasvati of Kailas Ashram, Rishikesh. In addition to several research papers on various aspects of Indian Philosophy, his publications are – Integral Nondualim: A critical exposition of Vijnanabhiksu’s System of Philosophy, and Unadisutras in the Sanskrit Grammatical Tradition. He has also translated Tarkasangraha with the Tarkasangrahadipika of Annambhatta with a detailed commentary in Hindi.

Mithilesh Chaturvedi is associate professor in the department of Sanskrit, University of Delhi. Besides a number of research papers and articles, his publications include Vrttisamuddesa of Bhartrhari’s Vakyapadiya: A Study. He has also translated a number of works from English and Sanskrit into Hindi. He has recently edited the proceedings of an International Seminar on Bhartrhari Published under the title Bhartrhari: Language, Thought and Reality.

Astadhyayi of Panini is the culmination of a long grammatical tradition. It has been acclaimed as a ‘monumental work of human intelligence’ and the best descriptive model of a language which was the mother tongue of Panini the middle of the fifth century B.C. Panini ably blended his originality with careful and ingenious borrowings from the texts of the old grammarians to compose the Astadhyay. The extensive recognition of this perfect grammatical work consisting of 3983 sutras (aphorisms) is evidenced by the near extinction of the pre- Panini an works of grammar and by the enormity of commentarial literature written on it. Probably in the fourth century B.C. Katyayana composed about four thousand varttikas which proposed the correction, completion and explanation of the aphorisms of the Astadhyay. These varttikas as well as the sutras of the Astadhyay became the focal point for Patanjali’s to author the great commentary called Mahabhasya in the second century B.C. The Mahabhasya stands distinguished from other bhasya texts and hence is called the Mahabhasya. The reason is that it also assumed the role of the Astadhyay by proposing is its (bhasyasutras) to describe Sanskrit language.

The grammatical literature composed by the reputed triad of grammarians came to be known by the appellation trimuni vyakaranam. It is indeed the encyclopedic Mahabhasya that has discussed thoroughly almost all grammatical issues and has laid down such principle as have become the last and final word in all places of doubt. It would not be out of place to say that it is Patanjali who, through his magnum opus, raised the grammatical issues to the level of philosophy. After a gap of nearly six centuries, Bhartrhari made the theoretical issues of grammar a focal point of study and wrote an authoritative and scholarly siddhanta text, the Vakyapadiya, on the philosophical tenets of grammar as well as his Mahabhasyadipika (…tika: at present available up to seven ahnikas).

The grammatical apparatus set up by Panini regarding the structural aspect of Sanskrit attracted the attention of Jayaditya and Vamana who wrote the Kasikavrtti in the seventh century A.D. It is the only extant full-length commentary on the sutras of the Astadhyayi. According to Haradatta the term vrtti means a work in which the meaning of a sutra is given primacy. Although the title of the commentary on the Astadhyay written by Jayaditya and Vamana is the Kasikavrtti, it contains more than the meaning of a sutra as is clear from its opening verses. Jayaditya and Vamana describe it as being a summary of the significant views that are found scattered in the vrttis of Kuni, Cullibhatti, Nallura, etc. on the Astadhyay, the Mahabhasya of Patanjali, the Dhatuparayana, Namaparayana etc. It also has istis (desirable proposals by Patanjali in the Mahabhasya), upasankhyanas (emending statements made by Katyayana on the sutras of the Astadhyay), edited lists of ganas, unraveling of the deeper significance of difficult sutras and derivational details of word-forms constituting illustrations. So, the Kasika is more than a vrtti.

Jinendrabuddhi, a Buddhist grammarian of the eighth century, wrote an easy but illuminating gloss on the kasika. It is known as Nyasa or Kasikavivaranapanjika. In the twelfth century, Haradatta, another famous grammarian of Southern India, wrote as the Padamanjari. Both these works together propagated and popularized the study of the Astadhyayi. Jinendrabuddhi’s work is a great aid in getting at the meaning of the sutras of Panini in a considerably comprehensible way and presents the derivational details lucidly, whereas the work of Haradatta contains everything important that is propounded in the Mahabhasya, which is implied from the popular saying: If the Mahabhasya has been studied, then it is no use studying the Padamanjari.

Purusottamadeva wrote the commentary Bhasavrtti in the twelfth century. He made use of the Kasika in preparing his commentary. As the title suggests, it was only on those sutras of the Astadhyay which deal with bhasa classical language. His exposition was brief and straightforward. He did not pay any attention to the theoretical aspect of the Paninian system. Nonetheless, the examples which he has provided in the Bhasavrtti are varied and have been chosen for clarity of structure and frequency in usage.

With the advent of the Rupavatara of Dharmakirti in the eleventh century, the focus of study in the Paninian system of grammar shifted from interpretation to application. The Rupavatara of Dharmakirti is the oldest extant text of the prakriya tradition. Its goal was to facilitate the understanding of beginners. Accordingly, the number of sutras which are discussed by Dharmakirti is limited. Dharmakirti commented on 2664 sutras only, as he did not include the rules on accent and Vedic Sanskrit but the number of illustrations used is manifold. Because there was a shift in emphasis, the order of the sutras of the Astadhyay was given up. The rules were taken up as and when they were required by the stage of derivational process of the illustrations which were selected purely for derivational reasons. So, the focus for this commentary was the application of grammar in chosen examples. Despite being a successful attempt, the Rupavatara of Dharmakirti did not gain much popularity due to its over-simplified approach to the treatment of the sutras of the Astadhyay and their frequent repetition.

Ramacandra, a grammarian of the fourteenth century, wrote the Prakriyakanmudi and thereby improved upon the prakriya method initiated by Dharmakirti and standardized it. He too focused on those sutras which dealt with classical Sanskrit. However, at the end, he included a small section dealing with the Vedic prakriya. Many Vedic rules have also been included elsewhere in the Prakriyakaumudi according to the context. His treatment of the verbal paradigms with reference to the grouping of roots, their categorization and arrangement became standard for later prakriya texts. These two prakriya works did not match the depth with which the Kasikavrtti was written. Nonetheless, they did usher in the prakriya tradition which gradually gained popularity.

The prakriya method, which laid emphasis on the applied aspect of Panini’s grammar, reached its culmination in the Vaiyakaranasiddhanta- kaumudi of Bhattoji Diksita in the first half of the seventeenth century (Dictionary, p. 289). This prakriya work is popularly known as the Siddhanta-kaumudi. Although it follows the organizational format of the Prakriyakaumudi, its scope is much wider since it comments on every sutra of the Astadhyay. It scholarly interpretation of the rules of Panini’s grammar with examples and counter-examples accompanied b panktis (pithy statements containing the gist of the principles of grammar as discussed in the Mahabhasya) overshadowed not only the Rupavatara and Prakriyakaumudi but also the Kasika and other commentaries. At several places Bhattoji Diksita does not accept the interpretation of the sutras of the Astadhyay by Haradatta, Madhava, Ramacandra, etc. if it is not in consonance with the interpretation of the Mahabhasya. He also criticizes the Kasika whenever he finds in it something inconsistent with the Mahabhasya.

Bhattoji himself wrote the commentary Praudhamanorama on the Siddhantakaumudi to elaborate it is a scholarly manner. In the eighteenth century, Nagesa wrote two elaborate glosses on the Siddhantakaumudi: Brhacchabdendusekhara and its shorter version Laghusabdendusekhar. Of the two, it is the latter which became popular and is taught nowadays at traditional pathasalas in courses on Navyavyakarana. The meticulous and precise presentation of the principles of grammar in the Laghusabdendusekhara speaks volumes for Nagesa’s mastery of the Mahabhasya. At every step, whenever he critically examines the views of Bhattoji, whether in the Siddhantakaumudi or in the Praudhamanorama, he invariably supports his own view by quoting from the Mahabhasya. It is this reason that Nagesa became the most reputed scholar of Panini’s grammar in his time and was approached by everybody who wanted to gain proficiency in the grammar of Panini.

It is true that the approach of the Prakriya tradition was pedagogical but Bhattoji’s goal was not exactly the same. It cannot be denied that he shared the responsibility of shifting the focus from the theory of grammar to derivational process and from the of rules of the Astadhyay to the order conducive to that process. Nonetheless, it cannot be gainsaid that the phase of grammar that started with Bhattoji and continued up to Nagesa did contribute to the understanding of Panini’s grammar. This could be fairly assessed by visualizing the Siddhanta-kaumudi rearranged in the Astadhyay order. 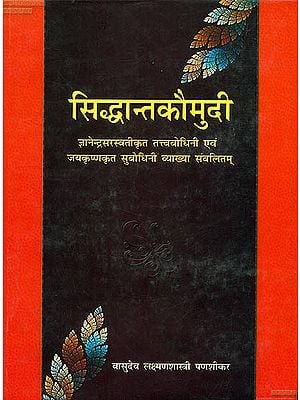 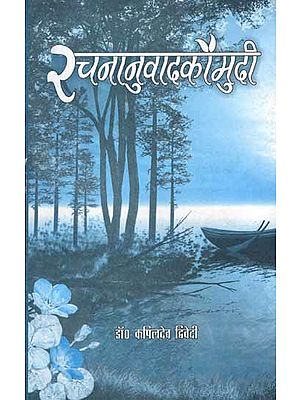 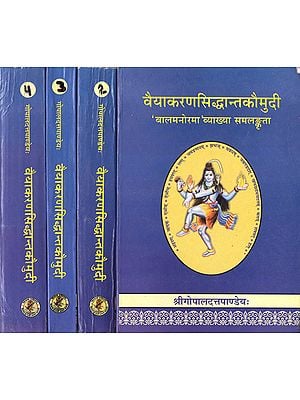 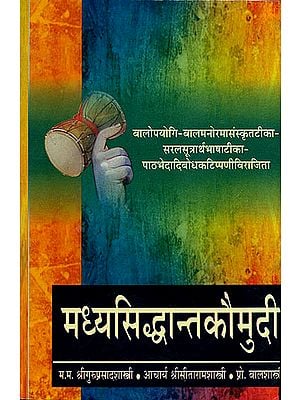 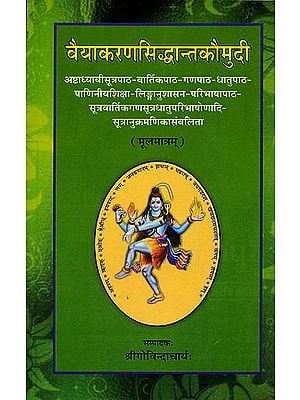 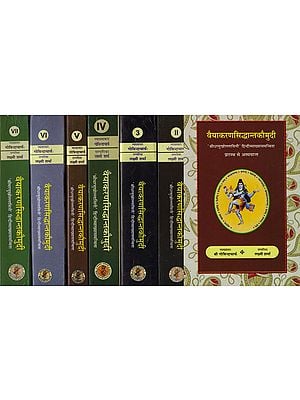 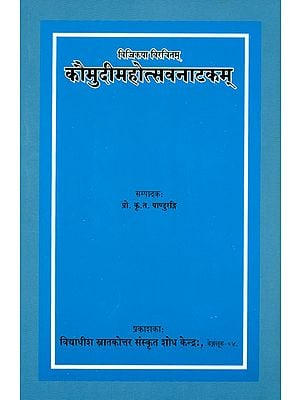 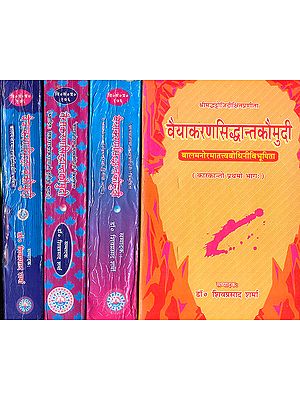 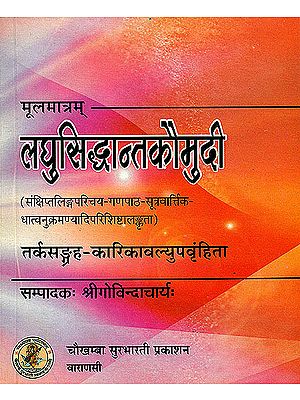 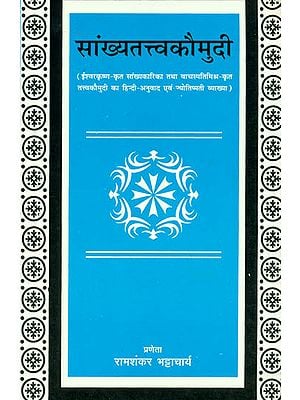 Development of Combinatiorics from The Pratyayas in Sanskrit Prosody
By Venugopal D. Heroor
$36
FREE Delivery 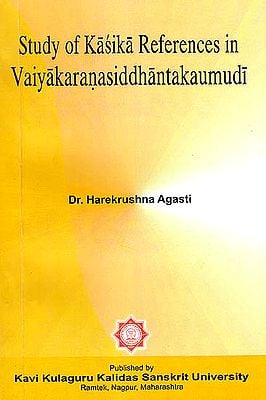 Study of Kasika References In Vaiyakaranasiddhantakaumudi
By Dr. Harekrushna Agasti
$24
FREE Delivery
Add a review
Have A Question