On the Edge of the Auspicious - Gender and Caste in Nepal

People of lower caste live throughout the villages of Nepal but have been noticeably abset from ethnographic accounts of the Himalayan region. Starting from the perspective of llower-caste Hindu women, Mary M. Cameron offers a long-overdue study of artisans and farmers in western Nepal.

On the Edge of the Auspicious skillfully shows the connections between caste hierarchy and gender relations leading to domestic, economic, and religious power of lower-caste women. Situating her study in the history of land ownership and contemporary family and work relations, comeron explain how and why patriarchal ideology associated with high-caste families in Nepal does not apply to women of lower caste. Drawing on data from work, family, and religious domains, this ethnogrpahy goes further than other current studies of caste hierarchy in South Asia to show the everday material and ideological dimensions of domination and lower-caste people's resistance to them.

Introduction
This is an ethnography of gender and caste relations in Nepal, a story told from the position of lower-caste women. What follows is an analysis of ethnographic data from a Himalayan farming community addressing the question of how gender and caste, as both social position and cultural practice, are meaningfully arranged in the lives of people from Bhalara in the Bajhang District of the Seti Zone in far western Nepal.

I begin this ethnography with the words of a low-caste woman because she conveys important information about anthropological encounters- she is there to talk with me because a female relative has encouraged her to come, she is embarrassed about her torn clothing but defends her poverty, and in spite of material poverty she has a rich heart, a "big heart" (thulo man) that will help her talk well. It is also important to begin with Dharu Damai's words because as a subject she has not been heard in the ethnography of Nepal. This is puzzling because people of low caste are is ubiquitous to Nepal as its villages. Most studies of the region make oblique reference to people of Hindu low caste, with the exception of a few duly noted analyses of intercaste relations. (The important work by Parsh [1996] on identity and self of Newar upper-caste and untouchable men n urban Bhaktapur near Kathmandu appeared while this book was in process and could not be fully incorporated) In the relative absence of low-caste people from the ethnographic record of the Himalayas, we can conclude either that the history and culture of low -caste people have been assumed to differ little from those of India or that they have managed to remain aloof from anthropological inquiry. I hope to change the effect of these views by helping to show relationships that have previously gone unnoticed.

One relationship I confront throughout the book is an abstract one- the relationship between the hierarchical nature of caste and the hierarchical nature of gender. On sheer functionality alone our attention is drawn to how these two systems might interact to structure the social, economic, and religious lives of Hindus. But the indigenous view necessitates adopting a less foreordained approach, for the cultural views epalese Hindus hold on important life matters indicate that they do not regard life to be fully predetermined-even though much explicit ranking and "placing" of people occur. We learn more about how hierarchy operates if we view acts of domination and submission in everyday practice and their consequences rather than structure alone. Those most regularly affected by the power of the dominant are people of lower caste and women, and they provide a range of reflections on their situation. During my research with the people of Bhalara, their self-reflexivity evident in the epigraph made the difficulty of working with lower-status people easier. They live in a society that ideologically frames them as inferior, but they do not fully agree with it, nor do they apply its high-caste patriarchal codes to their gender relations.

Exploring the twin themes of gender and caste in Nepalese Hindu culture allows me to clarify these aspects of a person's life. Everyday aspects of work, family, and self are not the same for women of low-caste familes in Nepal as elsewhere in South Asia. Low-caste women are not passive and submissive to male authority, a common (but gradually changing) portrayal of high-caste women in Hindu culture. Nor do the ritual complexities of India's caste society apply to Nepal's Hindus. Still the lower-caste people of Bhalara are in the same position as those of India-at the bottom of the caste hierarchy (though Bhalara's untouchables believe caste no longer exists in India) and typically at the bottom of the class one as well. As feminist anthropological studies have so well shown, however, social position alone tells us little about its history and the lived experience of people who by birth find themselves there and try to make sense of it. While scholars of Indian culture have surpassed those of Nepal in enriching our knowledge of Hindu culture, lower castes and particularly women from both countries are underrepresented. Since this project began some ten years ago, more published accounts of Hindu women (mostly upper caste and middle or upper class) and lower castes (mostly men) have appeared. I hope to add to the growing recognition by anthropologists that dominant models and groups provide only partial truths and that knowledge is constituted by the positions of our subjects and ourselves (R. Rosaldo 1989). Mine, too, is a partial account. Attending to basic social and cultural features of low-caste groups-kinship, economic history, artisan labor, caste relations, religion, marriage-resulted in less time spent in a single domain. The choice to focus on gender and caste relations in the context of agricultural and artisan production originated from my interest in the seasonal flow of subsistence farming in a difficult physical environment and what my informants told me about their sense of place and identity as hill farmers and artisans. My focus on low-caste people omits detailed discussion of upper castes, though they are referred to frequently. This omission is softened by the fact that the groups least rep- resented are well accounted for in other studies of South Asia-the Brahman and Kshatriya (Bahun and Chhetri, as they are called in Nepal).

In the everyday lives of low-caste women, one's caste and gender symbolically and pragmatically constitute innumerable exchanges with others. A close examination of the social ordering practices in Bhalara reveals that ideas associated with gender are intimately connected to ideas about caste. Gender and caste in South Asia have always been understood as ranking practices, whatever else one might add to the fact (such as auspiciousness and complementarity). This book takes a close look at how these two cultural domains influence each other. At an abstract level, then, the book demonstrates that caste and gender as cultural domains of knowledge and practice shape the history of their own reproduction, like samsara and karma in Hinduism and Buddhism. This does not happen, however, in a context-free or agentless manner. By writing about these constituting practices in depth, I implicitly assume a dialectical relationship between people and the history and culture they make.

What is of interest about people living with definite codes about social position and social interaction is people's agency in creating, re-creating, and resisting the system from their position within it. Hierarchy is neither a predetermined structure nor an epiphenomenon; it is an everyday practice motivated by "a strong concern to keep unlike things separate" (Milner 1993, 303). As a kind of practice, caste hierarchy is not about how rules and norms operate but about how people's agency reproduces, challenges, and changes the system (Ortner 1984). A dynamic approach to aspects of hierarchy in the social life of Bhalara' s Hindus helps us understand subjectification and its counterforce, a subjective agency. Other studies of highly structured societies show alternative discourses to the dominant one (Abu-Lughod 1986). Here I am guided not by the question of discursive adaptation or counterdiscourse but by the question of the subject in the history of social process and culture.

My introduction to the people of Bhalara occurred twenty years ago, when I arrived after the first of many long journeys to a place where I was expected to adjust with enthusiasm and teach with deft and determination as a Peace Corps teacher of mathematics and science. The math was simple, the science challenging to teach in Nepali. But that experience gave me the gift of gab, a fluency of language learned through serendipity and wonder rather than through anthropological "investigation." I was socialized into speaking a form of village speech (gauli basha) , which rarely fails to communicate in Bhalara and endlessly amuses my urban Nepalese friends and colleagues. I view Nepalese culture quite differently now than I did earlier; back then I was more like the teacher and poet Themozhiyar in Margaret Trawick's (1990) warm ethnography of a Tamil family that visits Trawick in upstate New York. Themozhiyar cannot silently observe the culture around him in America, and he reacts in a moral but none- theless ethnocentric way (20-21). I am not as rebellious against aspects of Nepalese culture as I was at twenty, though I have opinions about caste and gender practices. People in Bhalara have come to" know my position on these issues, and if that has altered my research in any way, it is in the direction of debate with those involved, asking of us all sometimes uncomfortable reflexivity.

Although my Peace Corps experience remains hidden in personal journals, during that time I gained the deepest understanding of Nepalese culture than I have at any time since, including the period of doctoral research from 1988 to 1990 and a follow-up period in the winter of 1995. The two research periods, as well as an earlier predissertation period of three months in the summer of 1985, have gone into the writing of this book. But the original knowledge and relationships from 1978 to 1980 helped build all that followed. I feel privileged to have been able to maintain a warm relationship with the people of Bhalara. I do not envy their difficult life or desite their spirituality, as have other visitors to the Himalayas (Adams 1996), but I do admire them and care about them as friends and family. 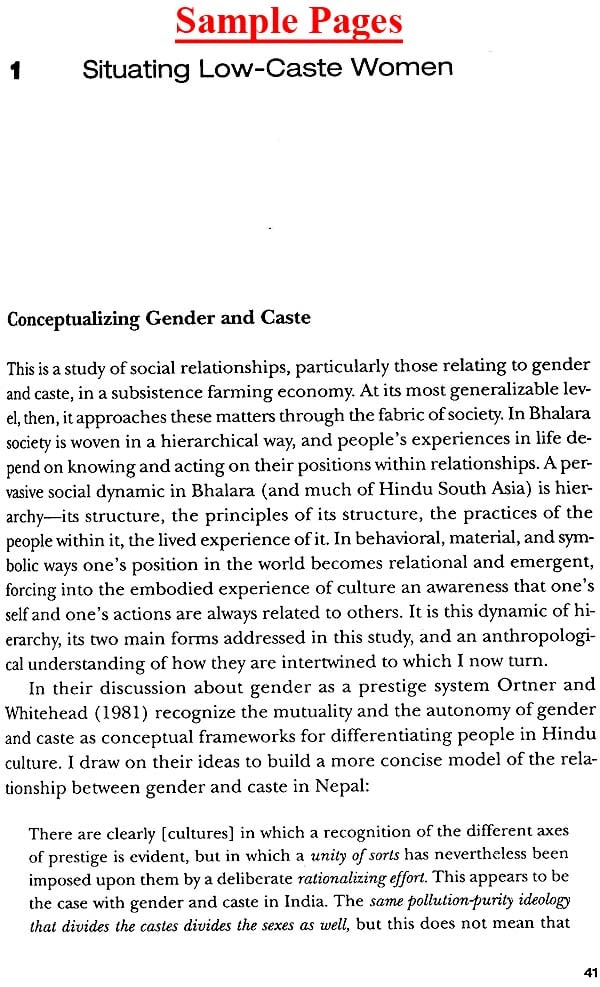 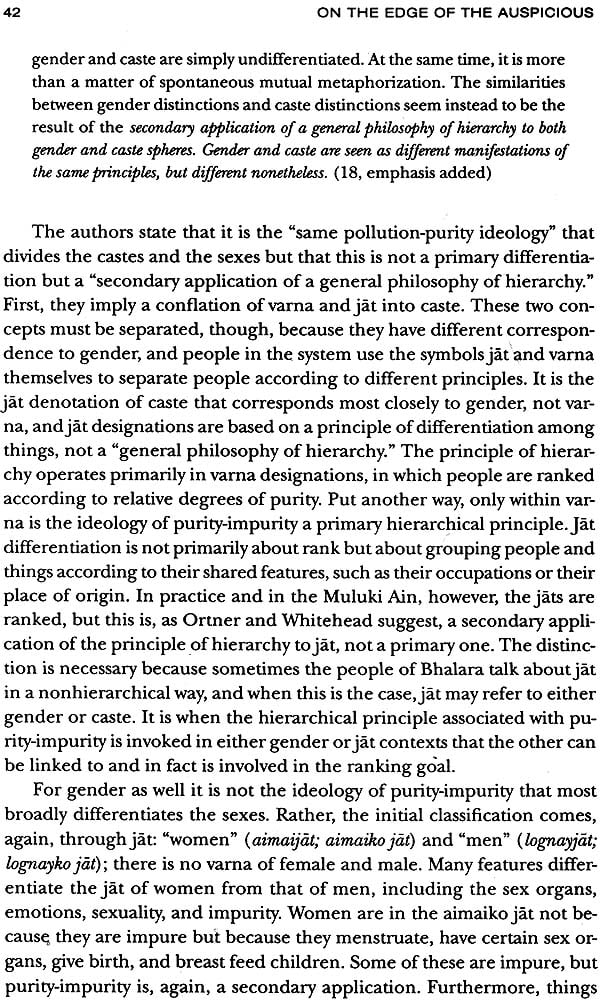 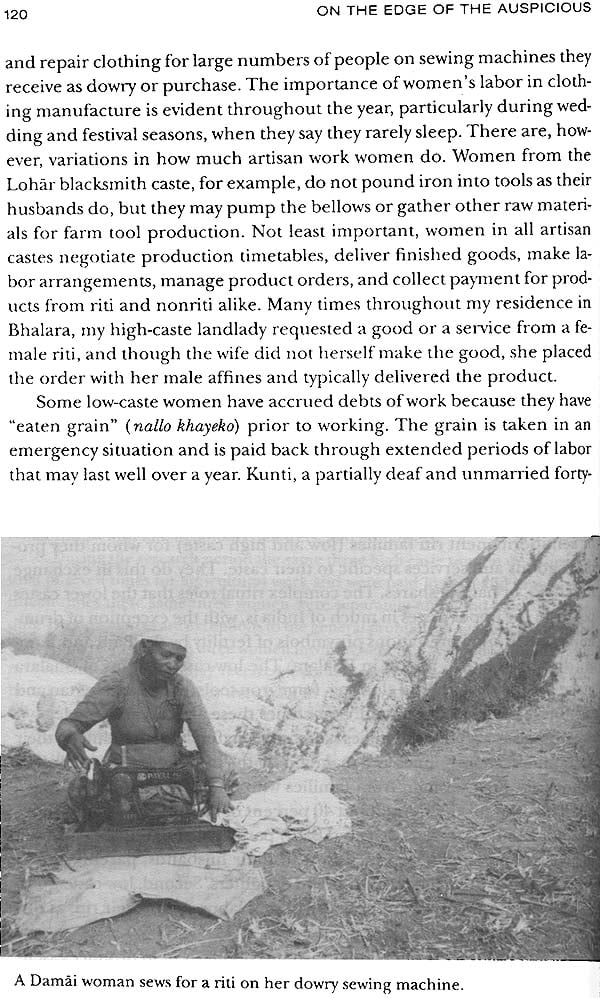 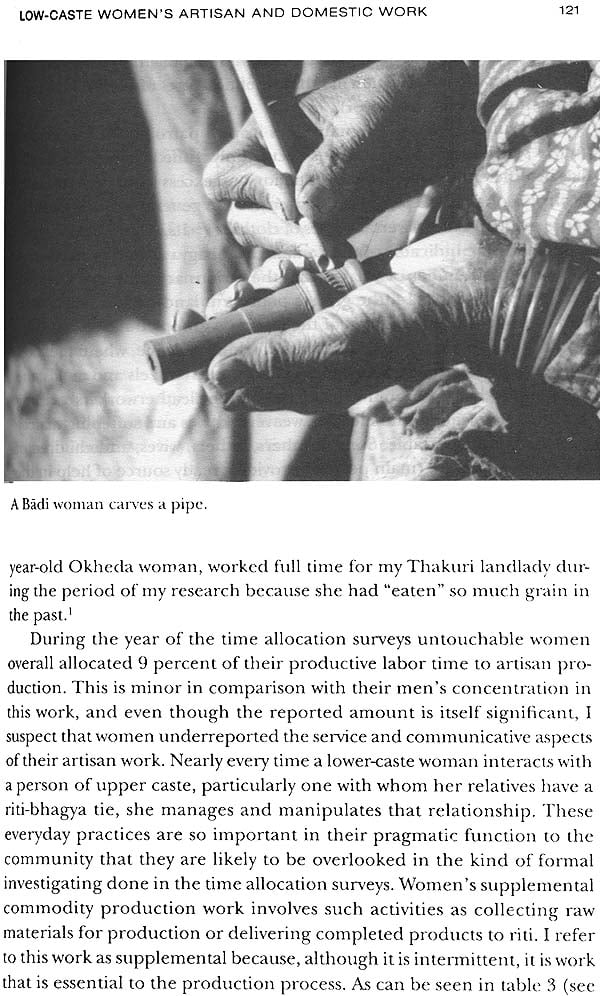 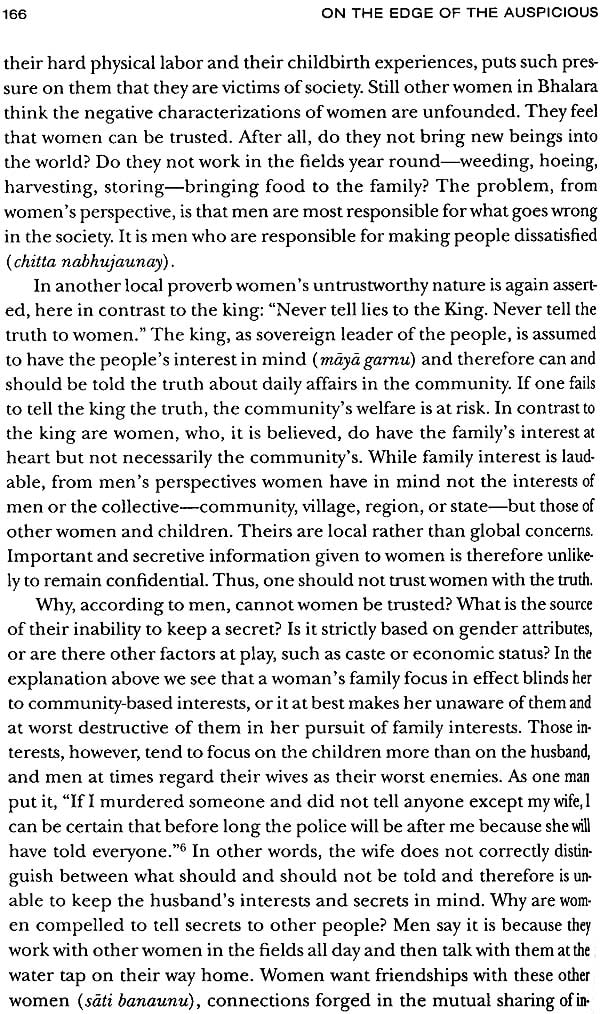 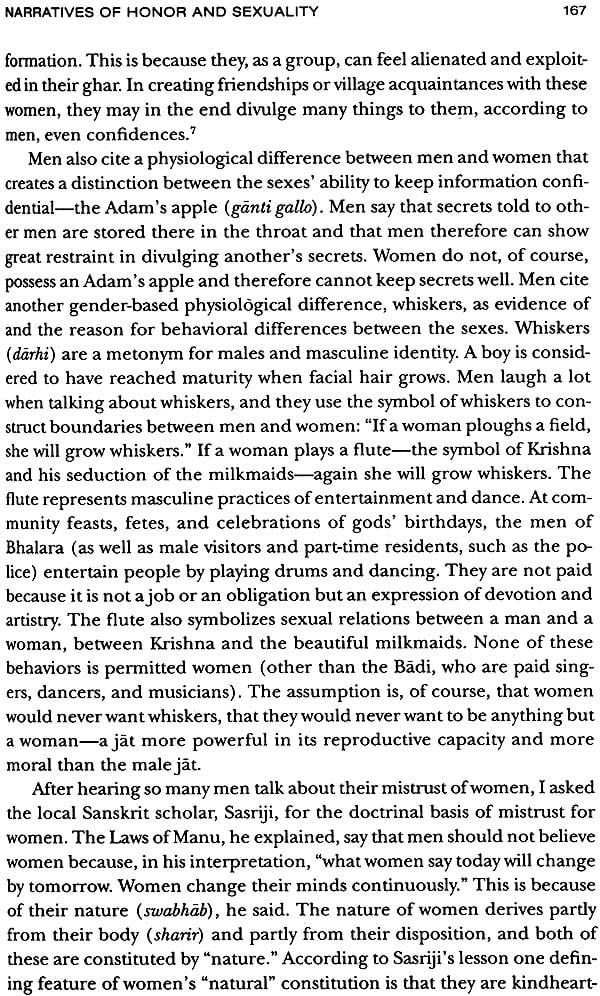 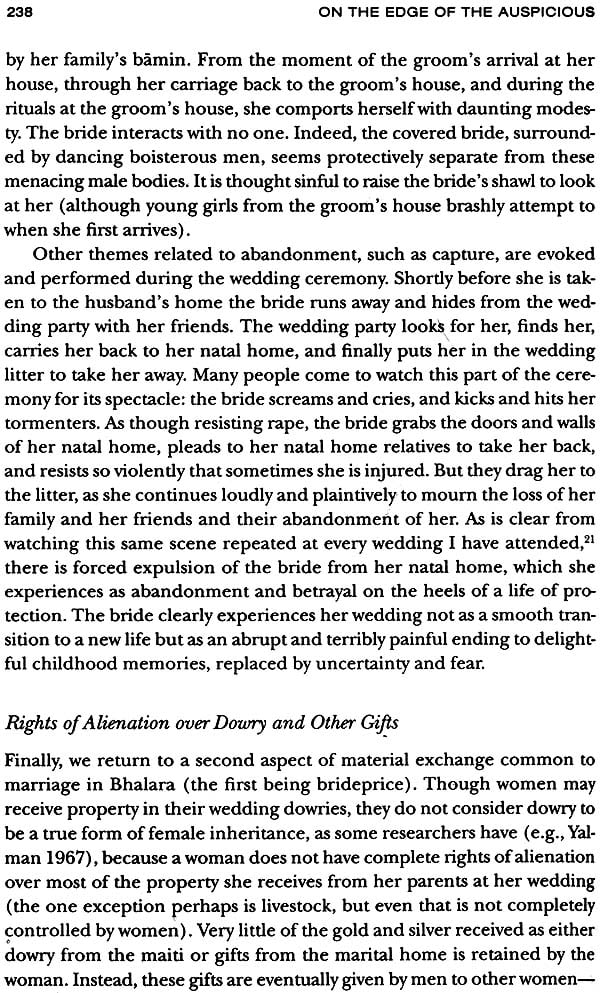 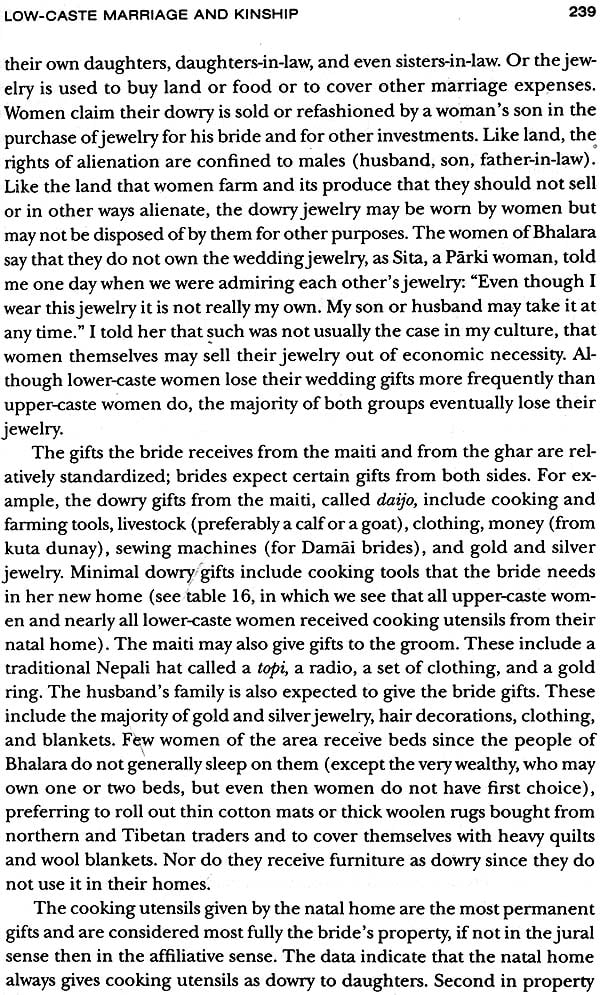 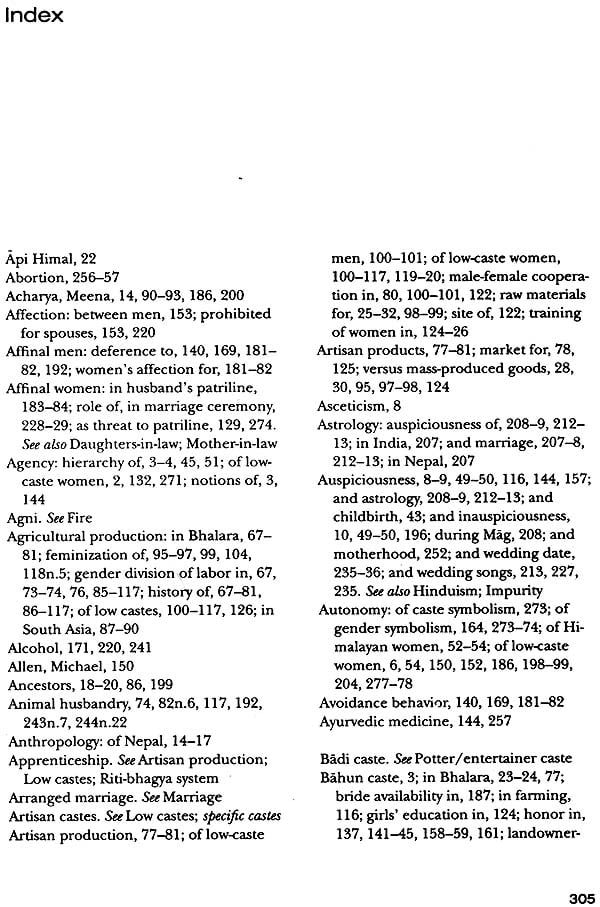 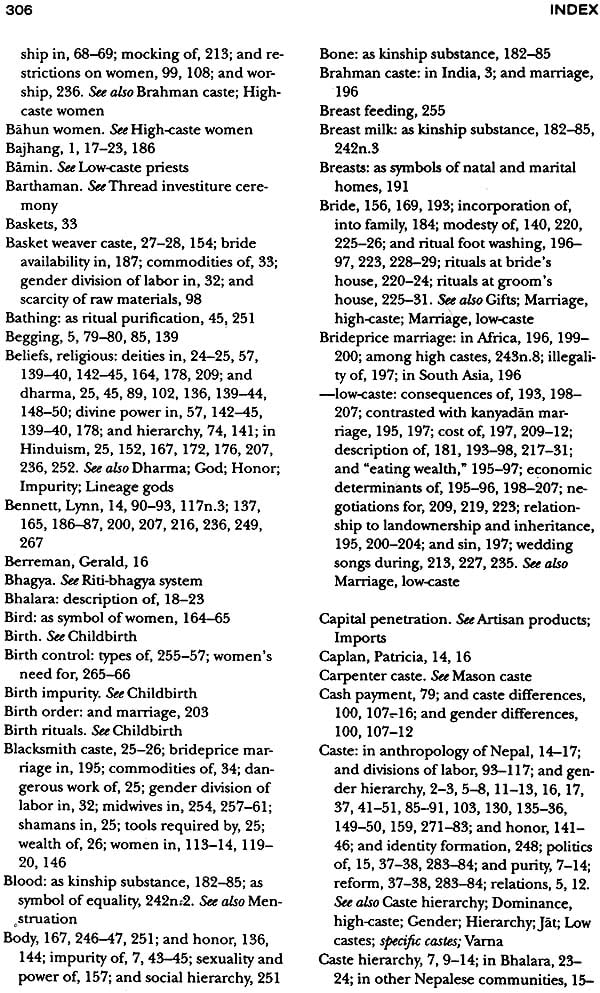 Contesting Nation (Gendered Violence in South Asia: Notes on The Postcolonial Present)
By Angana P. Chatterji and Lubna Nazir Chaudhry
$41.60
Out of Stock
$52  (20% off) 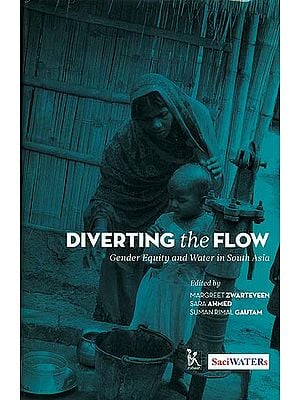 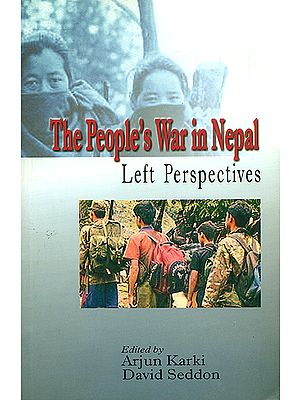 Nepalese Women (A Vivid Account of the Status and Role of Nepalese Women in the Total Spectrum of Life, Religious, Social, Economic, Political, and Legal)
By Indra Majupuria
$41.60
FREE Delivery
$52  (20% off) 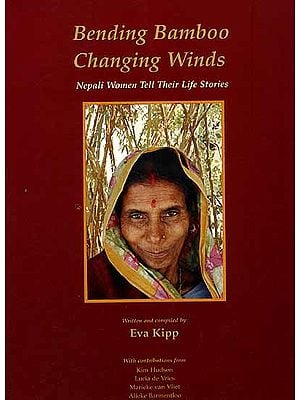 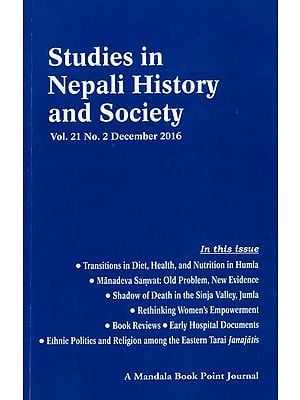 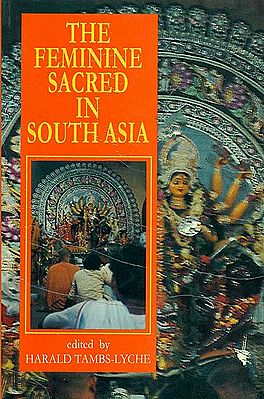