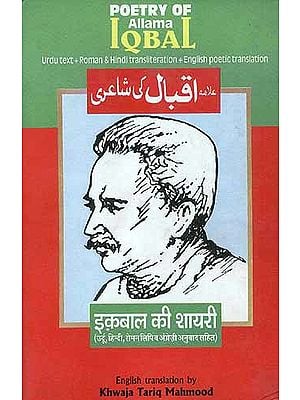 SIR MOHAMMAD IQBAL also known as Allama Iqbal, is a great name in Urdu and Persian (Farsi) literature. He wrote his poetry in Urdu and Farsi (1873-1938), and that bridged and encompassed the past many centuries of man's endeavours in the realms of thought and intuition. He emblazoned the high standards set by Mirza Asadullah Khan 'Ghalib', and glorified the literature in his own way. He was a scholarly personality, and wrote on various subjects, from philosophy to politics, from romance to emotions and so on. He wrote world famous poem 'sare jahan se acha Hindustan hamara' and many other such 'nazams' which are even today considered as great poetical creations. He was honoured with the title 'sir' by the British Government for his contributions to the literature.

The present collection is a representative of Iqbal's Urdu poetry, which has been transliteration into English verses, with translation into Devanagari (Hindi) and Roman script. The English translation has been done by Khwaja Tariq Mahmood, who earlier translated the poems of Mirza Ghalib and Sahir Ludhianvi, and is now working on many other collections.

We hope this collection will be well received by all those who have any interest in Urdu poetry and Urdu literature.

Khwaja Tariq Mahmood, born in 1927 at Chakwal, graduated in engineering from the Punjab University in 1947. He was commisioned in January 1948 in the Corps of Electrical and Mechanical Engineering, Pakistan Army, and retired as brigadier in 1979. He graduated from Staff College, Quetta in 1956, and from Royal Military College of Science, Shrivenham U.K. in 1960-61. He took his law degree in 1977 from the Punjab University and Master's degree in International Relations in 1985 from University of Southern California, U.S.A. He is at present living in Middlesex, U.K.

Because of his great interest in Urdu poetry, Khwaja Tariq Mahmood has already compiled and translated the following collections.

He is now working on the following:

which are due to be released very shortly.