She is the communicator of knowledge, she is full of the rarest wisdom. Is she of the common run? She is my Shakti.

You have not yet realized how precious Mother is. People will not understand her now, but they will, gradually. Brother, there will be no salvation of the world without the help of the Divine Power Why is it that our county is the weakest and most backward of all countries? Because Shakti is held in dishonour here. Mother has been born to revive this wonderful Shakti

The life of Sri Sarada Devi, the spiritual consort of Sri Ramakrishna, and popularly known as Holy Mother amongst the devotees, is an enigma. On the surface, it appears to be just a homely life of a Bengali woman lived mostly in a rural setting. Yet her deportment discloses unmistakable marks of dignity and love a divine order. Her humility, yet touches of serene silence, and the gracious and unbounded richness of her heavenly splendour of her inner life.

This biographical album, containing 179 picture, of Holy Mother, individual and in group, arranged chronologically, and many pictures of places and persons connected with her. Nearly all the photographs are accompanied by a narration illustrating some incidents of her life or her teachings. Also included is her short life-sketch.

Motherhood is a universal principal pulsating at the root of existence, a mode in which Reality expresses Itself first by creating, and then by preserving and nourishing Its creatures, and finally by receiving all into Its bosom for eternal rest. Holy Mother Sri Sarada Devi concretized this principle in her person, and therefore, we see in her personality unique traits of universal character. She is Sri Ramakrishna's final word as to the ideal of Indian womanhood. Silent, forbearing and sacrificing, she drew all her children from across the frontiers to her by her unfathomable love, like a full-bloomed lotus drawing bees  a process still going on unseen and in silence. In these Reminiscences, we catch a glimpse of that 'Universal Mother Power' in the person of Holy Mother Sri Sarada Devi.

Reminiscences of Sri Sarada Devi, by Monastics, Devotees and Others, is a translation of the four-volume Bengali publication Sri Sri Mayer Padaprante, compiled and edited by Swami Purnatmananda and published by the Udbodhan Office. We are happy to bring out this book this year, when Sarada Devi's 150th birth anniversary is being celebrated in India as well as abroad with great spiritual fervour.

This volume contains twenty-eight reminiscences taken mostly from the first two Bengali volumes. Two of the reminiscences  viz. those of Swamis Shivananda and Saradananda  have been included from the first two Bengali volumes have been omitted as the material they contained was of the reminiscences much irrelevant material that did not deal directly with Holy Mother, but rather centred on others around her. Thus what we have presented here is the cream of the Bengali original.

But apart from the matter taken from the Bengali volumes, some additional material has been included in this English edition. For example, the first chapter, 'Swami Vivekananda on the Holy Mother', is new and was not in the Bengali original, and so also some new matter has been incorporated in the chapter : The Holy Mother: Our Eternal Haven', by Sister Nivedita. The last is a compilation from her letters, life, and other sources. The reference have been given at the end of this chapter. The difficult task of incorporating new materials, eliminating unimportant details, and overall editing of the book was done by Maloti Sengupta, in consultation with and under the guidance of Swami Bodhasarananda of Advaita Ashrama. May Holy Mother's Blessing be showered on them.

An informative Glossary has been added to help the readers with non-English words that have been used and that are difficult. The dates given in the references are the same as those in the original Bengali book. In most cases these dates refer to Bengali year and are marked BS  i.e., Bengali Samvat.

A reverential study of Holy Mother's life  a life of infinite dimensions  will, we believe, be highly rewarding to the readers, especially to the spiritual seekers. 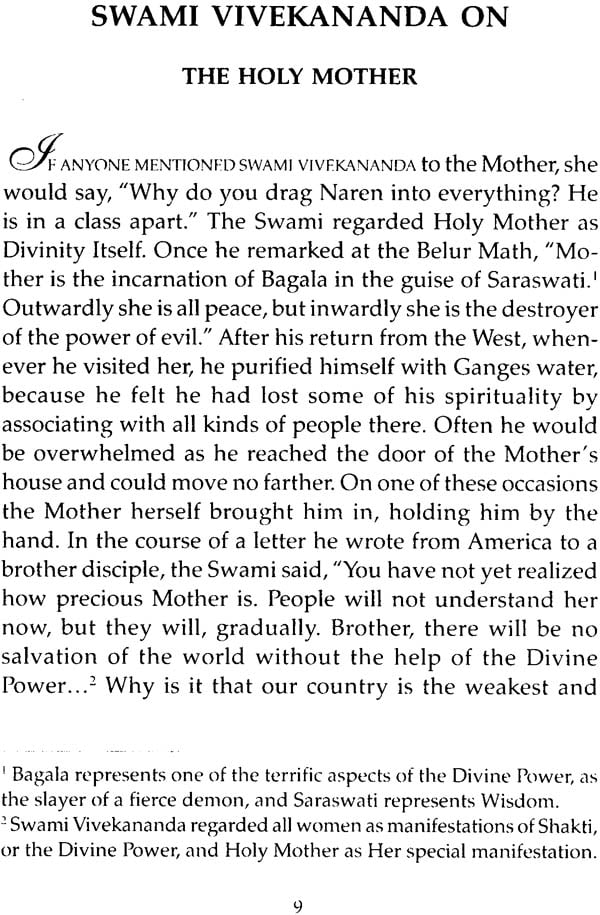 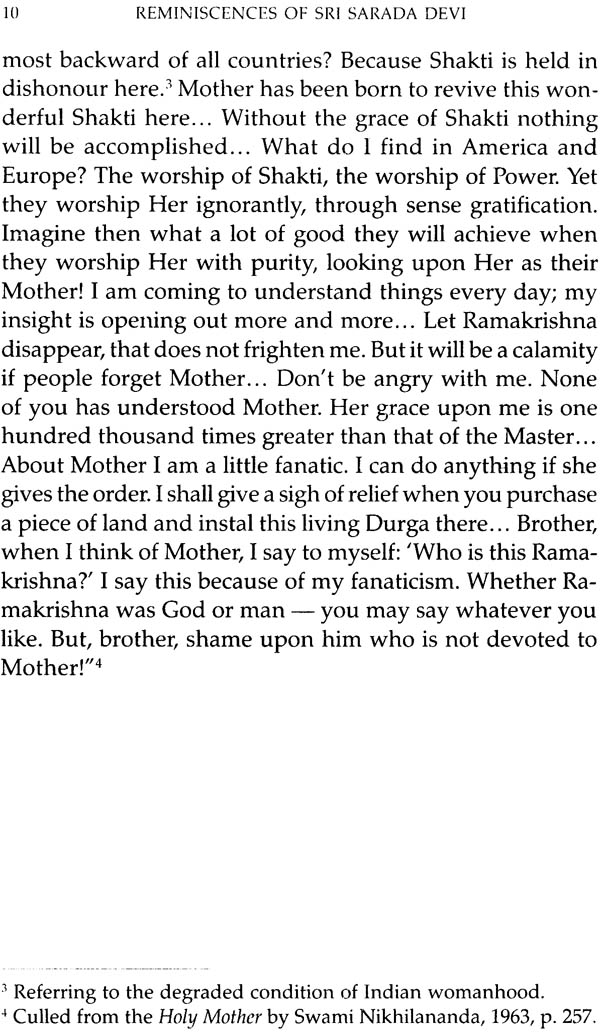 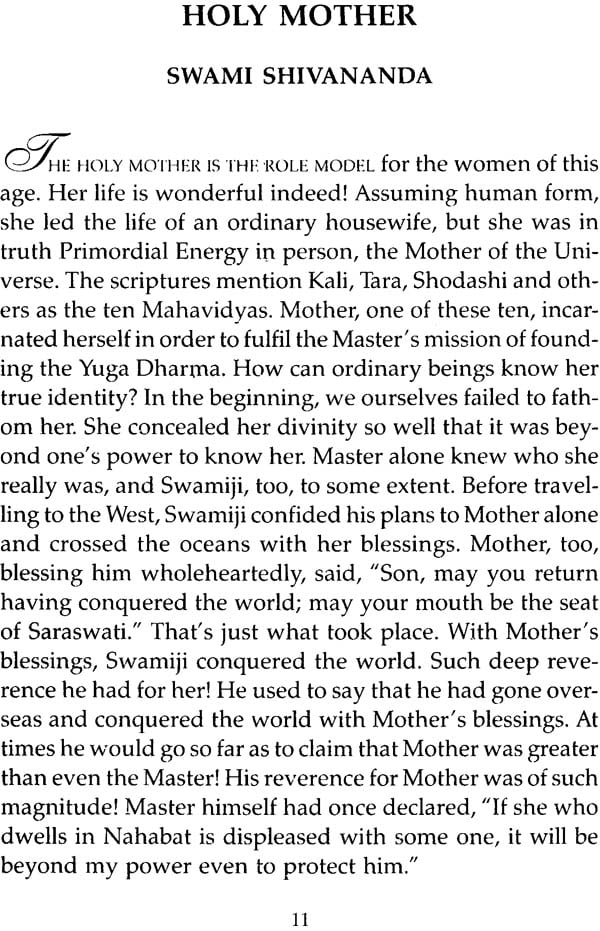 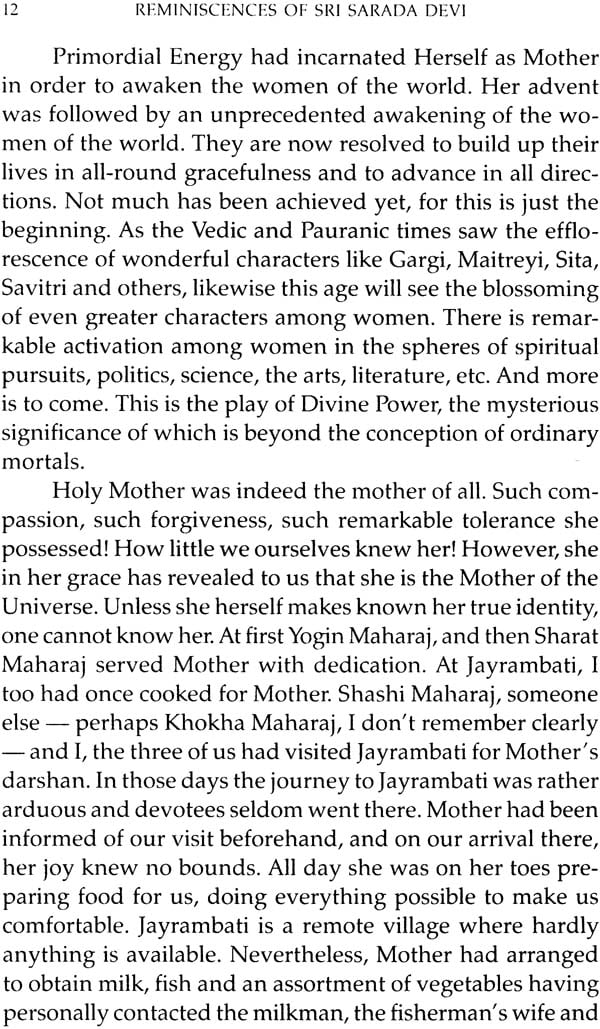 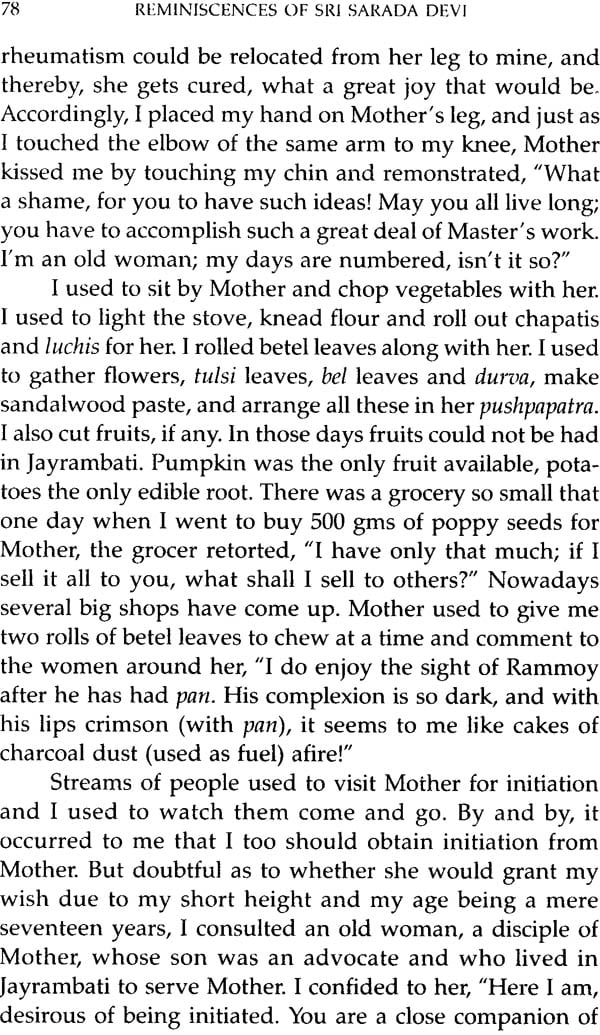 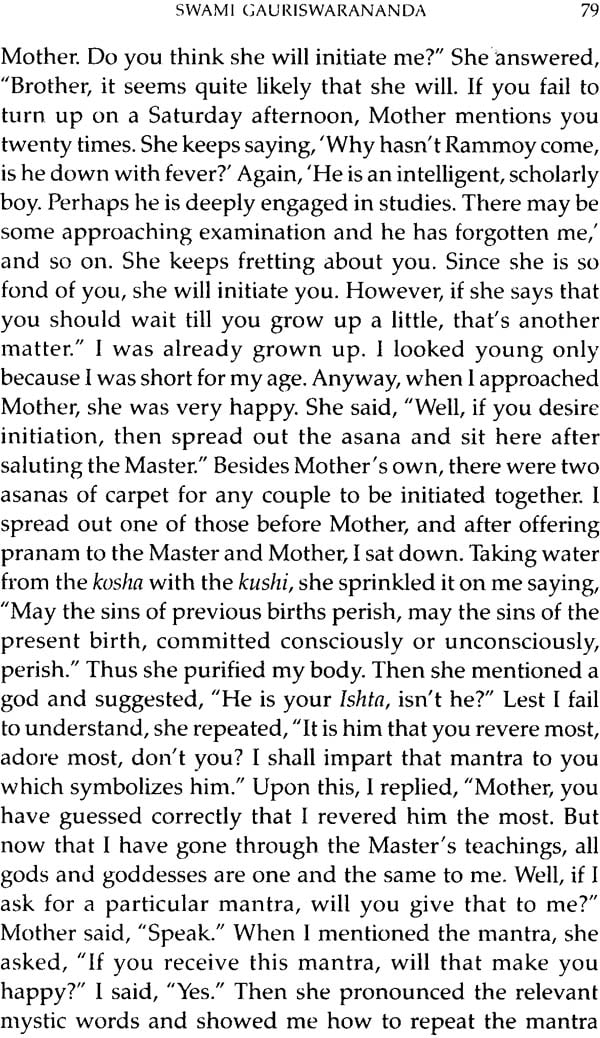 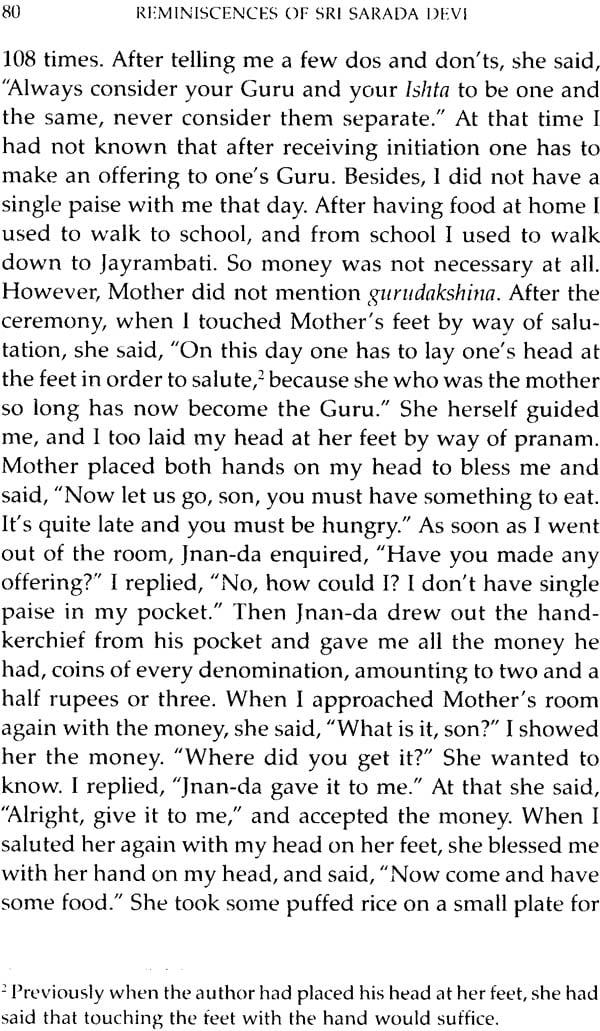 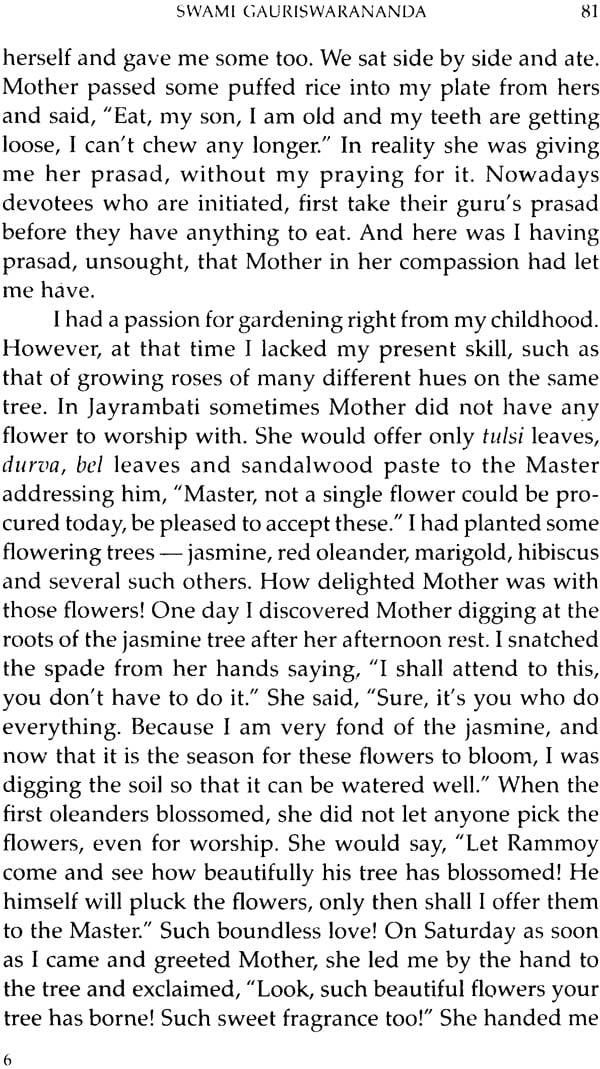 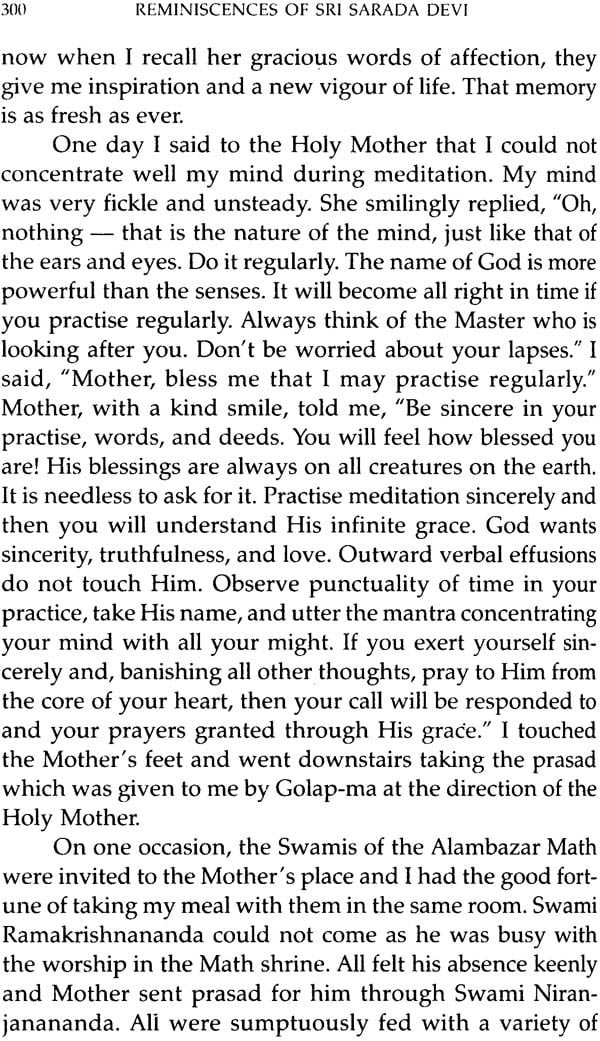 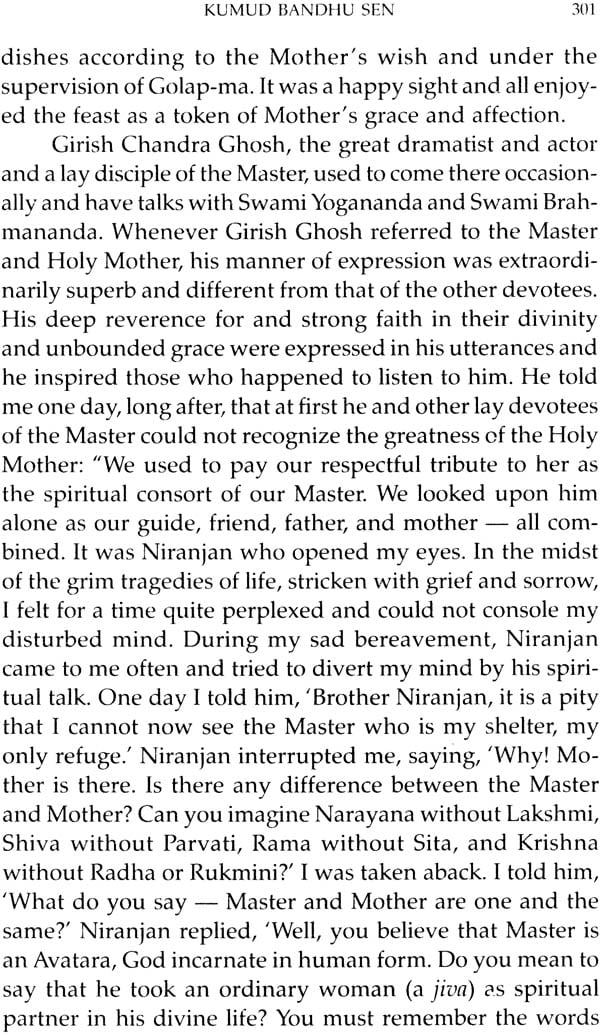 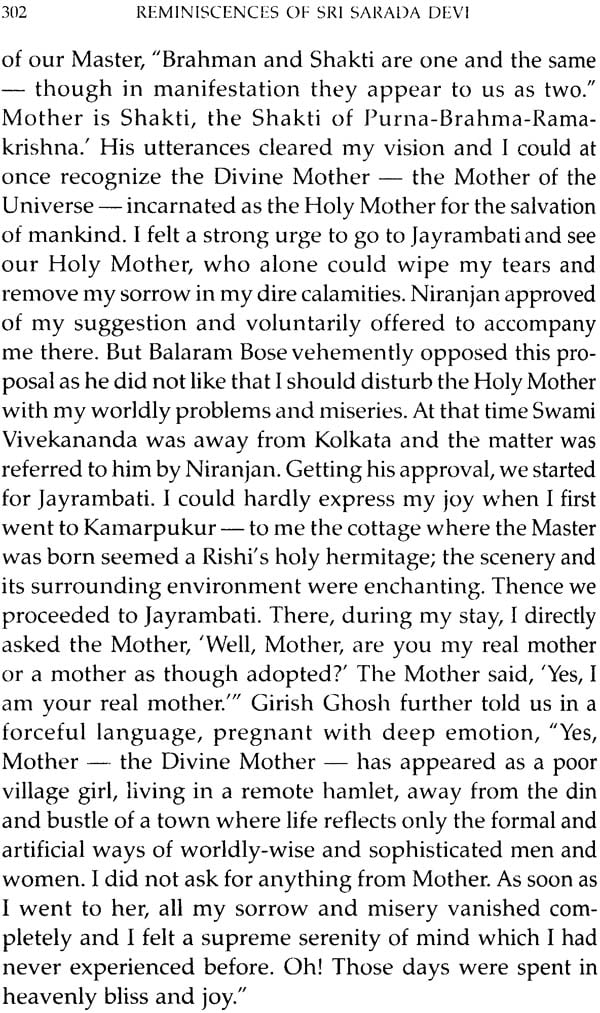 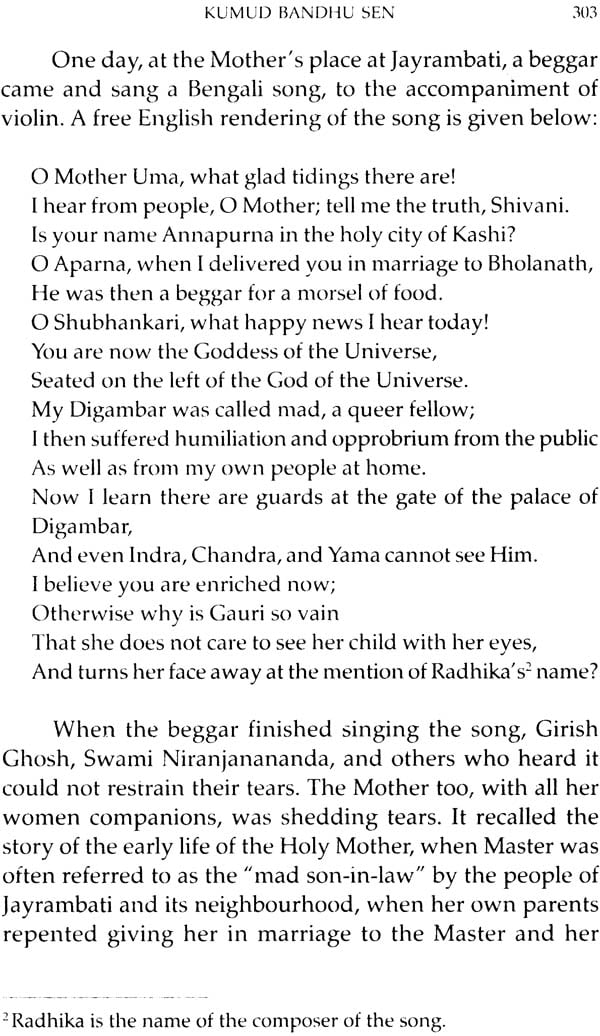 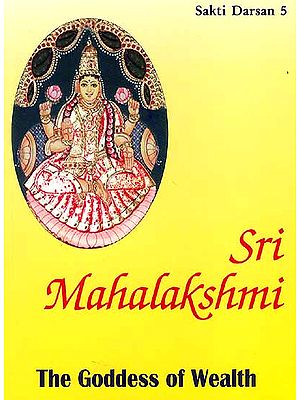