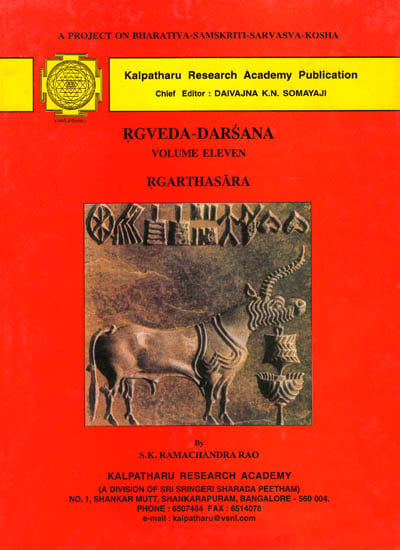 The Kalpatharu Research Academy Bangalore is an institution running with the benign blessings of his holiness Jagadguru Shankaracharya Sri Sri Bharathi Tirtha Mahaswamiji under the auspices of Dakshinamnaya Sri Sringeri Sharada Peetham, established in 1981. Kalpatharu research academy has strided across the horizon of Ideological Research and Publications with giant steps and today stands as an institution know for its unique quality of research work.

Kalpatharu Research academy is dedicated to the cause of preservation of ancient heritage of India it has encouraged research in the fields of Agama, Veda, Tantra, Jyoutisha Mantra Sastra, Vastu , Yoga, Silpa Ayurveda Etc.

The academy has plans of undertaking intensive research in the field of Veda and Vedanga and intends publishing Bharatiya Sanskrit Sarvasava Kosha an encyclopedic work in several volumes dealing with all aspects of Indian tradition and culture. It seeks of promote education culture, science, Art and learning in all its branches. The approach will be broad based and multi disciplinary.

An extensive, comprehensive and specialist reference library has been built up to assist the research workers in the ideological disciplines. A valuable collection of Palm leaf manuscripts relating to Veda, Vedanta, Vedanga and allied subjects had already been made the collection work is continuing.

Dakshinnamaya Sri Sringeri Sharada Peetham has been running a Guru Kula type a institution on tradition lines to impart Vedic Education at several places. Some of these institutions are over 100 years old. It is the intention of Kalpatharu Research Academy to take an active part in continuing this age old tradition and act as the research & Publication wing for these institutions.

Our ambition is to develop as a national centre for higher learing in Veda Vedanga and Shashtras and facilitate the propagation of unique Sanskrit and Vedic texts in the national and International arena.

This publication is the 98th of its achievement is this field.

In his professional career, however, he was a Professor of Psychology. He has headed the Department of Clinical Psychology in the National Institute of Mental Health and Neuroscience’s. Bangalore, and the Department of Indian culture in the Collision College Study Center of the Unws4ty of the Pacific (USA). At present, he as the Senior Associate of National Institute of Advanced Studies (Indian institute of Science. Bangalore. and Guest Faculty, Indian institute at Management Bangalore and member of the govering council of TTD (SVCL Research Centre) Tirupati.

He has written more than sixty books in Kannada a play in Sanskrit and a Pali Commentary on a Buddhist classic one of his books on iconography in Kannada has won the state Sahitya Academy award as also another of his books on the Tirupati temple.

Among his numerous English publications are three volumes of Encyclopedia of Indian Medicine Tibetan Tantrik tradition and Tibetan meditation Heinemann, Delhi consciousness in advatia and a series of six books on Indian temples and origins of Indian thought Kalapathru research academy has published his Pratima Kosha in six volumes agama Kosha in twelve volumes. Art and architecture of Indian temples in three volumes.

It is with a sense of satisfaction that the Kalpatharu Research Academy Bangalore is bringing out the Eleventh volume in Rgveda Darsana series under the project of Bharatiya Samskriti Sarvasva Kosha 29th in series. It is also the 91st publication of the Academy since its inception in 1981. the project is to envisage a comprehensive and authentic picture of Indian cultural heritage in its entirety and in all its diversity. The academy is proud of its achievements in this field.

The Rgveda Darsana series is at once noval and valuable. It throws immense light on the hitherto dark areas of Vedic culture. This is the Eleventh volume in this series, Vidyalankara, Sastra Chudamani, Sangita-Kalaratna, Vidyavachaspati Prof. S.K. Ramachandra Rao has compiled this volume Rgartha Sara and we are grateful to him for this valuable work.

We are indebted to the munificent blessings of His holiness the Jagadguru Sri Sri Sri Bharati Tirtha Mahaswamigalu of Sri Sringeri Sharada Peetham who is the Chief Patron of the academy. We acknowledge the kindly interest evinced by of the Sri V.R. Gowrishankar who is the Chief Administrator of the Sri Sringeri Sharada Peetham and Chairman of the academy.

Rgarthasara (The Essential Import of Rgveda) is a selection of two hundred mantras from the Rgvedic corpus, made by Dinakara-bhatta who lived between 1575 and 1640 A.D. he also appended brief glosses on each of the mantras he selected and he has followed Sayana-bhasya closely. The present publication has taken this selection as its starting point but has presented the mantras in a new light and with English renderings of the mantras.

I am indebted to Shri Venkatesh Babu and Shri Nagendra of the Omkar offset printers for their uniform courtesy while the volume was under print. 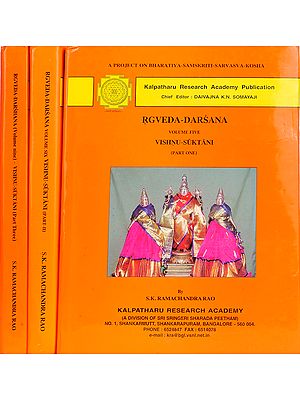 Rgveda-Darsana Vishnu Suktani (In 3 Volumes): Explaining all the Suktas of Lord Vishnu Occuring the Rgveda
By S.K. Ramachandra Rao
$84
Sold Out 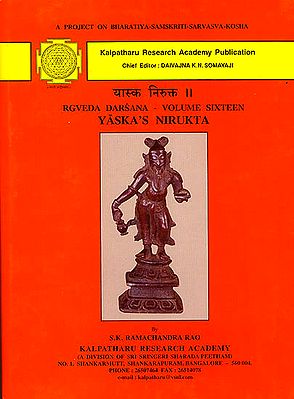 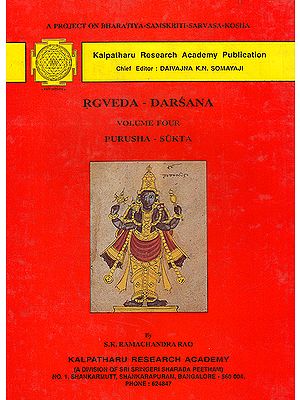 Rgveda-Darsana: The Purusha-Sukta - An Indispensible Tool for Understang the Rig Veda
By S.K. Ramachandra Rao
$53
Sold Out

The Four Vedas (Set of 8 Volumes) - Sanskrit Text with Transliteration and English Translation
By Dr. Tulsi Ram
$415
Sold Out

Sama Veda (An Old and Rare Book)
By Dr. Tulsi Ram
$73
Sold Out
Book FAQs
Add a review
Have A Question