Barbara Pidgeon grew up in Scotland but has spent much of her adult life in several countries around the world. Throughout her international career, she always endeavoured understand the diversity of the people she felt privileged to work and live amongst and would seek firsthand experience in local cultural and spiritual practices whenever possible. Her many enriching encounters over the years led her to a rural spot in Jharkhand, India, where she met her guru, Swami Satyasangananda, whose story she had the great honour to write about in this book.

Currently, she lives in London researching how we are impacted by the way that we breathe, a fascinating topic that we know so very little of, she argues, and one that she plans as the subject of her next book.

While it is essentially true that women have enormous potential and have even been given the status of Devi in our land, Bharatvarsha, still the actual manifestation of this in the world will only take place when women themselves realise this. At present they don't. Women have tremendous power and compassion too. Women have inherent wisdom and innate beauty. Women are soft and gentle, loving and kind. They are full of grace, dignity and poise. They are tolerant, honest and obedient. Women are ambassadors, carrying goodwill, charm, expertise and diplomacy wherever they go. Women rise to the need of situations in a magnificent way however difficult they maybe. They have hidden reserves which come to the surface when they are touched, moved or inspired.

This book is inspired by womanhood. Written with the idea of celebrating the notion of women empowerment, it looks at the very unique way of uplifting women that Rikhiapeeth offers. By elevating the little girl child to the status of kanya here at Rikhiapeeth, revered Gurudev Pujya Paramhansa Saryananda, sowed the divine seed of liberation for women.

The Vedas declare that devas, the divine illumined beings, do not visit the place where women are not respected, adored and worshipped. This means that if our land becomes bereft of the idea of women as kanya or devi then, in course of time, this land will perish, decay and die. Thus, the idea of women empowerment is not just for women alone but for the future of our land, our nation, our values, our traditions and our very own identity.

This book is an effort to bring forth this idea by showing the example of Rikhiapeeth where this tradition of awakening for women is strongly establishing its roots. It is unique as the author has succeeded in interweaving many aspects of Swami Satyananda's vision, not just for women, but for society at large.

Rikhiapeeth is Swami Satyananda's gift to society. His social vision. His sankalpa and its beautiful enactment. I am happy that Barbara Pidgeon was inspired to present his vision to all and congratulate her for her perceptive talent of drawing out the essence of what Rikhiapeeth stands for, a lesson in LOVE.

May Guru's grace shine brightly in her life.

In a slender but significant work of rational faith, Barbara B. Pidgeon brings alive the universe of Rikhia, a karmabhoomi of Paramhansa Satyananda Saraswati and Swami Satsangi. Barbara brings to us the narrative voice of a seeker after truth: in many a reader-friendly way, she renders legible some profound and complex truths of yoga and bhakti. Of special importance is the last chapter where Satsangi gives her first interview concerning her life with Swamiji and at Rikhia from which we learn about the endless mission of Satyam (as I was privileged to call the Paramhansa).

Today, Rikhia is synonymous with Swami Satsangi, and underlying her sweet persona is a life of dedication to the Guru and the mission. In deft strokes, this work brings her persona alive for all, the initiates as well as laity. No one but Swami Satsangi could have completed Rikhia into the land of Satyam. The learned author's simple yet powerful statement compels: 'Behind Rikhia stands a story of enormous success and change. It is no longer the Rikhia that was "discovered"

In 1989, a period that now seems like a distant past for the local community. And this has been achieved through the unwavering commitment, dedication and devotion of Swami Satsangi.' The transformation from abject poverty to collective self-reliance is the saga of Satyam and Satsangi.

That commitment led by Swami Satsangi's endless - and it remains important to stress - non-violent 'war' against patriarchy, even among the world's 'First Nations' peoples. Sat yam and Satsangi constantly worked away against a patriarchal social order. And this work, even as it focuses on Swami Satsangi, offers a vignette of some worthy women saintly predecessors. Swami Satsangi leads, in exemplary ways, the work of women empowerment and gender justice.

This book is an unceasing elaboration of Satyam's own words: 'Perfect the unbroken awareness of your guru mantra with every breath and beat of the heart. This is your mission now.

Satsangi continues the mission and in the process transforms the lives of the sadly impoverished millions of scheduled tribes in and around Rikhia, and in building a world community of devotion and service for the 'wretched of the earth'. Expressed in terms of historic time rather than the timeless eternal, Swami Satsangi luminously follows the old even when ushering us into the new.

Life is a journey, a labyrinth of paths well trodden, sometimes a benign cycle of virtuous, enriching events, all too often a vicious cycle of disappointments and shattered dreams. Throughout the centuries, human beings have continued to live in similar patterns, repeating mistakes of the past over and over again. Our evolution has taken us technologically to a realm beyond our wildest imagining. Yet, emotionally, our basic, animal instincts all too readily come to the fore as we go on harming each other, and even ourselves, in the most unimaginably sophisticated ways. The First World War - and all the wars to follow - is a true testament to the ability of humankind to destroy one another with ever more efficient 'weapons of mass destruction', a term now common in our vocabularies. As supposedly superior and intelligent beings, we are not even emotionally developed to the point where most of us can adequately manage our basic of human needs; for example, the record numbers of illnesses attributed to our inability to even maintain a nutritional balance in our daily diets speaks volumes about us. A few people, however, throughout the ages have taken us by surprise by their positivity. They are role models that we can readily Identify with but somehow cannot emulate.

In the tiny village of Rikhia in the eastern state of Jharkhand, India, there is a small group of people who have managed to succeed in controlling their emotional states of mind. Here are a few who have understood the futility of the lives that most of us currently lead. These brave souls were not satisfied with simply treading the same old paths that most of us tend to continuously do. A life of wish-fulfilling events, they realised, would not ultimately satisfy their need to understand life on a 'different level'. Quite unexpectedly in this remote area, this group of people has given up the repetitive journey of roller-coaster emotions. They have stopped the ever-running treadmill of life, stepping away to look within themselves and to serve others. They have chosen to live in a state of harmony and equanimity and, in so doing, are unselfishly also making an incredible difference in the lives of many impoverished, downtrodden people in this corner of rural India.

It is somewhat surreal to me that I find myself sitting today in Chennai, writing about a remarkable story of rejuvenation in a rural area in the east of India, a brief account about an extraordinary woman at the heart of these events. That I have had the most incredible privilege to meet and interact with this woman is quite astonishing to me.

I began my life in a small village in Scotland, my upbringing not extravagant by any stretch of imagination, but in a world far removed from the poverty-ridden rural, often forgotten, communities across the globe. Various events in my childhood, some traumatic, followed by a marriage in my teens and a divorce in my twenties saw me on my own with three very young children and no real clue about what to do next. Blessed with a sharp brain and a tough, determined character, however, I was able to turn these difficult circumstances to my advantage. Fiercely protective of my small family, only wishing them a better life than mine, I worked ceaselessly to create a professional career that has taken us on an incredible journey.

After some years, I found myself living in Muscat, my children by then university students, our Omani home their holiday refuge. I was working hard but loving the expatriate life, a beautiful home overlooking the Arabian Sea and an active calendar of social events. Physical fitness was a big feature of our lives, the searing summers not a deterrent to outdoor pursuits. Life was idyllic, a comfortable situation that I had no desire to change. Due to unforeseen events, however, quite suddenly one day, things began to change. After four hours of mountain biking in the searing heat of the afternoon desert sun, a regular and usually uneventful pursuit, I became severely dehydrated and ended the day in hospital, close to death. Recovered and relatively unperturbed, just two weeks later, while mountain biking again in the same terrain, a fall left me unable to stand without support and in acute pain. Quite literally and unexpectedly knocked out of my comfort zone, I began to question my life and whether I was really growing as a person.

I was having fun yes, my family was happy, but where was it all leading to? And it was then that I was introduced to Shiva, my adi guru, my first yoga master and the man who would help me to propel my life in different directions.

A Keralite, my newly acquired yoga instructor had been living in Muscat for a number of years before we met. I was one among a contingent of eager yoga students demanding his attention. But for me initially, and for some time onwards, he was one of the most infuriating men I had ever met. My remedial 'treatment' was to sit for twenty minutes a day watching my breath. Simple enough I thought, but as I attempted to put his instructions into practice, seemingly impossible. Pins and needles and agonising discomfort were the overriding sensations I felt. I regularly questioned him about the efficacy of this numbing practice. My complaints, however, fell on deaf ears as he more or less ignored me and advised me to get on with it. Somehow, despite my rising impatience and our regular quarrels, I managed to persevere with what seemed such a useless practice. Then at last, after one full year, I eventually mastered the task that I had been given. After what seemed like an age, I could actually sit comfortably for the allotted twenty minutes - the pain gradually and quietly subsided, finally slipping away, unnoticed. 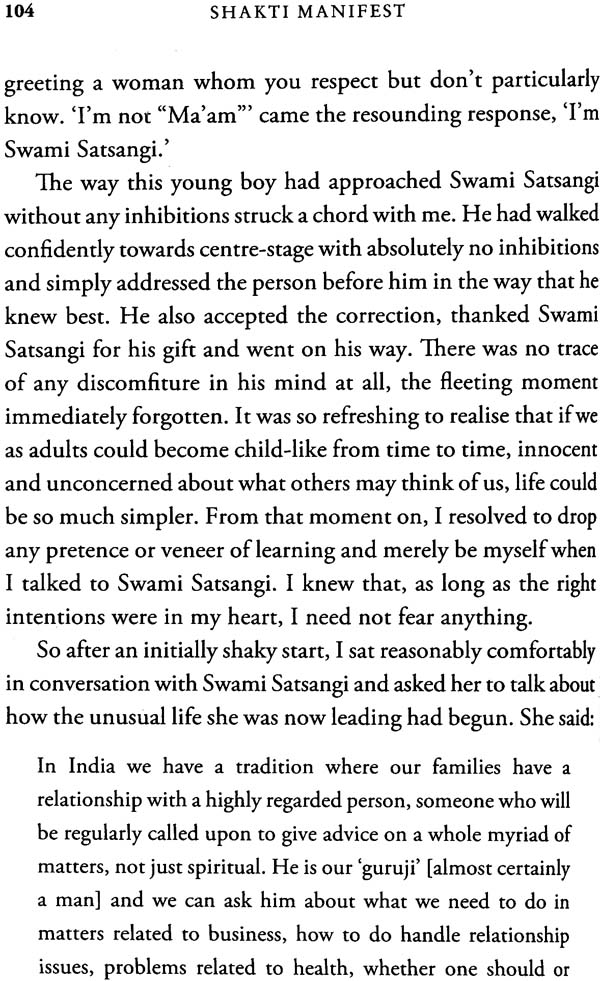 The Word Of The Guru : The Life And Teachings of Guru Narayana
By Nataraja Guru
$49
FREE Delivery Wisdom: The Absolute is The Adorable
By Nataraja Guru
$29
FREE Delivery The Bhagavad Gita: A Sublime Hymn of Dialectics Composed by the Antique Sage Bard Vyasa
By Nataraja Guru
$49
FREE Delivery Wisdom The Absolute is Adorable
By Nataraja Guru
$29
FREE Delivery