The Traditional Music of Kashmir (In Relation to Indian Classical Music)

My exploratory efforts in tracing the extant source material have enabled me to reach the conclusion that the traditional of Kashmir during the Hindu Period was more or less a shadow of Indian music. The slender evidences in Nilamata Purana and Kalhana’s chronicles are also suggestive that the Ancient Music of Kashmir was a version of Indian music. Ancient Kashmir had been a prominent centre for learning art. A rich culture flourished in this region during early medieval era. The rulers of Kashmir were great patrons of men of art and their courts were thronged by artists and musicians. The art of writing on the subject of music had not been in vogue. The musicians and artists did not also relish writing during those days. Little attention was devoted by historians to a comprehensive study of this subject in the cultural history of Kashmir, as a result of which we do not possess any source. Material on the notations and grammar of music which was prevalent at that time. However some styles of music and singing like temple sangeet, Shiv Gayan and traditional folk music survived the upheavals and persisted to appeal on account of their sentimental values and emotional attachment. These styles of music are continuing even now as a distinct genre and as a tradition of ancient Kashmir. Music is a part of culture of any place. Kashmir’s music is so full melody and rhythm that it distinguishes itself easily from the music of any other state. The delicacy, the grace and the charm Kashmir folk music is ultimate.

The folk music of Kashmir is rhythmic and fast and when its full swing attracts the attention of each and every listener.

This book is divided into six chapters. First chapter deals with Kashmir in its historical perspective. After that mentioned the ups and downs that Kashmir witnessed. Then I focussed on the origin and the development of the traditional music of Kashmir. Then I have given various categories of traditional music prevalent in Kashmir. The examples, the meanings and the occasions on which they are sung. I have also presented some songs with their singing patterns by way of notations of Indian classical music. Last chapter deals with the musical instruments used as accompaniments in various categories of the traditions music of Kashmir Their origin, description and the way they are played, in the last presents some of the songs which have classical basis or are close Ragas.

All reference to the historical, social and cultural aspects of Kashmir normally begins, and ends with the Nilamat Purana and Pandit Kathana’s Rajtarangini. Thanks to the concentrated effort of Dr. Sunita Dhar (Dean, Faculty of Music and Fine Arts, University of Delhi), another treatise has been added to the distinguished list of references. The book ‘The Traditional Music of Kashmir-In Relation to Indian Classical Music’ could not have come at a better time today, when a culturally rich state has been stripped of its glory by terrorism, the return of democracy is but a first step on the journey to normalcy. It is only when society prospers that culture can also develop. Hopefully, this book is a harbinger of the return of good times, when the lush valleys will once again resonate with the melody of pastoral tunes, when the bountiful earth shall thrum with dancing feet and the air shall vibrate with an energy only music can generate. Music knows no language, for it is an expression of the spirit and the soul. It transcends all barriers and brings people together. May the land of Kashmir be blessed again.

Kashmir has consistently enjoyed a rich and distinct cultural heritage that has been always viewed with awe in the Indian horizon. The social, economic and artistic life of the people in this “Paradise upon earth” inspired many writers and researchers (including me) to choose subjects varied in nature reflecting the cultural legacy of the land. Kalhana’s Rajtarangini’ is one of the works, which brought into limelight such nuances of the lives of the people of Kashmir to write on the subjects, which had a social and cultural bearing.

My book focuses on the subject “Traditional music of Kashmir in relation to Indian classical music”. Music is basically a spontaneous creation, which gives expression to human instincts, sentiments and emotions with its universal appeal and potentiality to enlighten the soul. It has been the most important medium of expressing to human emotions from early stages of life on earth. This art has progressed and evolved everywhere in the world with the evolution of civilizations. Different places and different nations have evolved their different forms of music and art. Wherever human civilization and culture advanced, literature learning and art got promoted. The advancement in civilization from time to time have witnessed simultaneous progress, development and promotion of music.

Delving into the past brought me to the conclusion that the music of Kashmir during the Hindu period was more or less a shadow of Indian Music. Nilmatpurana Kalhana’s chronicle suggest that ancient music of Kashmir was a version of Indian Music. Ancient Kashmir had been a prominent center for learning of art and the courts were thronged by artists and musicians. They maintained very close link with the rest of the country and Indian impression was reflected in the culture of this place. The art of writing on the subject of music had not been in vogue. The musician and artists did not relish writing during those days, as a result of which we do not possess any written material on the notation or on the grammar of music, which was prevalent at that time. Kashmiri have been great lovers of music. Since Kashmiri language does not have any script of its own, the culture and tradition preserved in its music has passed from penetration to generation.

However some styles of music and singing like temple sangeet, Shiv gayan and folk music survived the upheavals and persisted to appeal on account of their sentimental value and emotional attachment. These styles of music are continuing even now as a distinct genre and as tradition and rhythm that it distinguishes itself easily from the music of any other state. The delicacy, the grace and charm of Kashmiri music is ultimate.

There is no function or celebration which is performed without music. Not only on happy occasions but even in times of sorrow, the involvement of music is a must. Like ‘Van’, a folk form of Kashmir that is sung when someone dies and an environment of sadness prevails all over. It is a matter of honour for the Kashmir that Lalleshwari, Habba Khatton, etc. The great musical personalities belonged to Kashmir. Lalleshwari-the mystic poetess who used to roam naked-was of the opinion that the body is a creation of God and so need not be covered. Her couplets were superb and people even after years find solace in her poetry. Her ‘Vakhs’ are sung in every Kashmiri family. Likewise Habba-Khatoon’s invention of Ragas, poetry have all gone a long way in building the culture of Kashmir.

Although the Kashmiris came under the threat of losing their art and culture by militants even then the modern institution of culture and art, media electronic media, cultural academy and information Department of J&K Government have played a key role for revival of the art and initiated serious efforts for preserving and promoting the invaluable cultural heritage. These institutions are credited with strenuous efforts enedeavouring at a suitable notation system, appropriate grammar and development of audio-visual aids.

In the present study, the traditional music of Kashmir has been divided into the following categories: 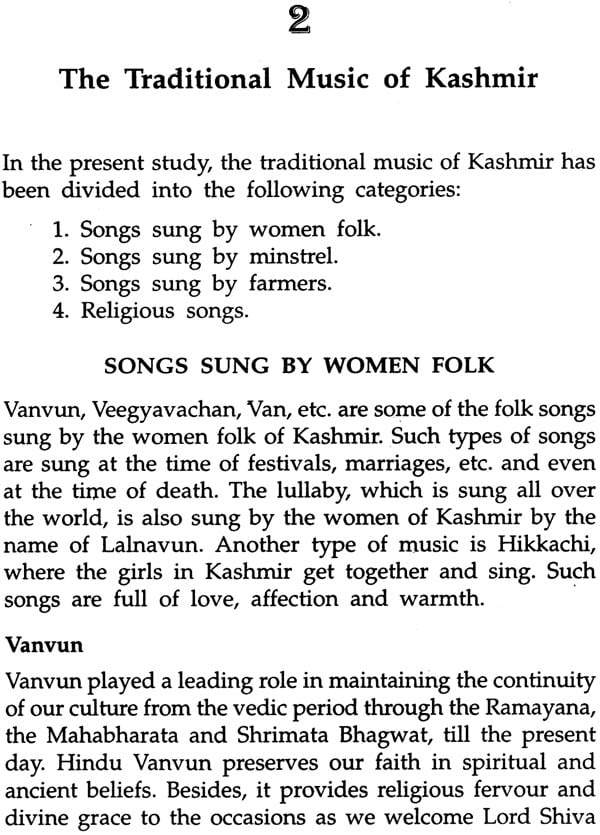 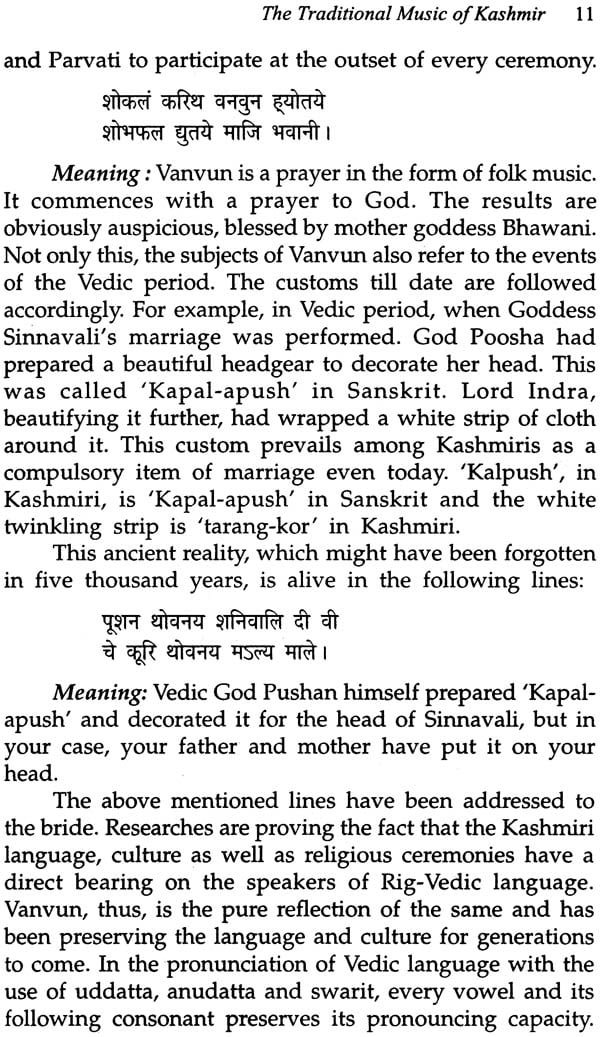 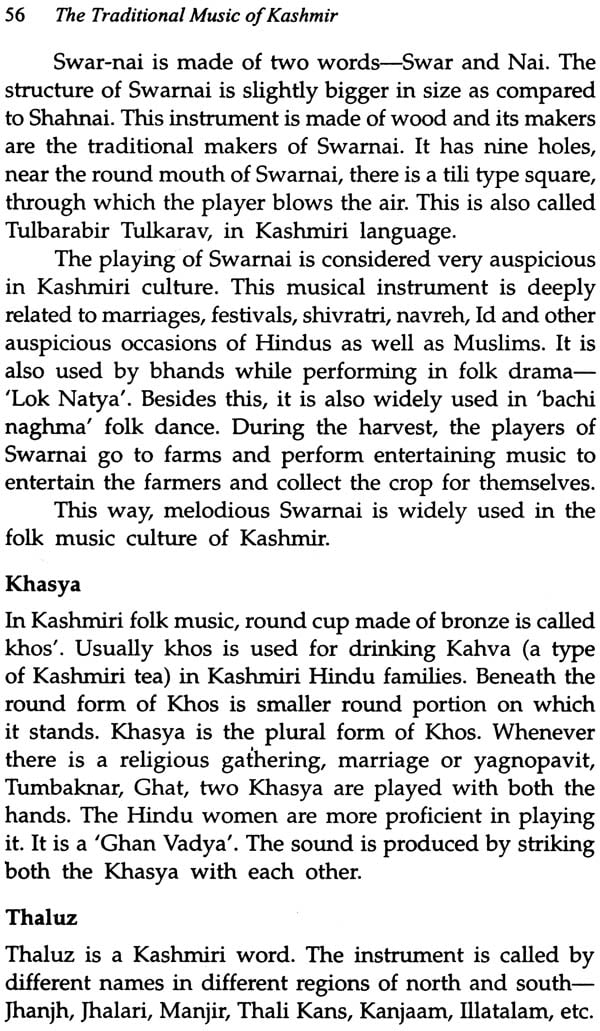 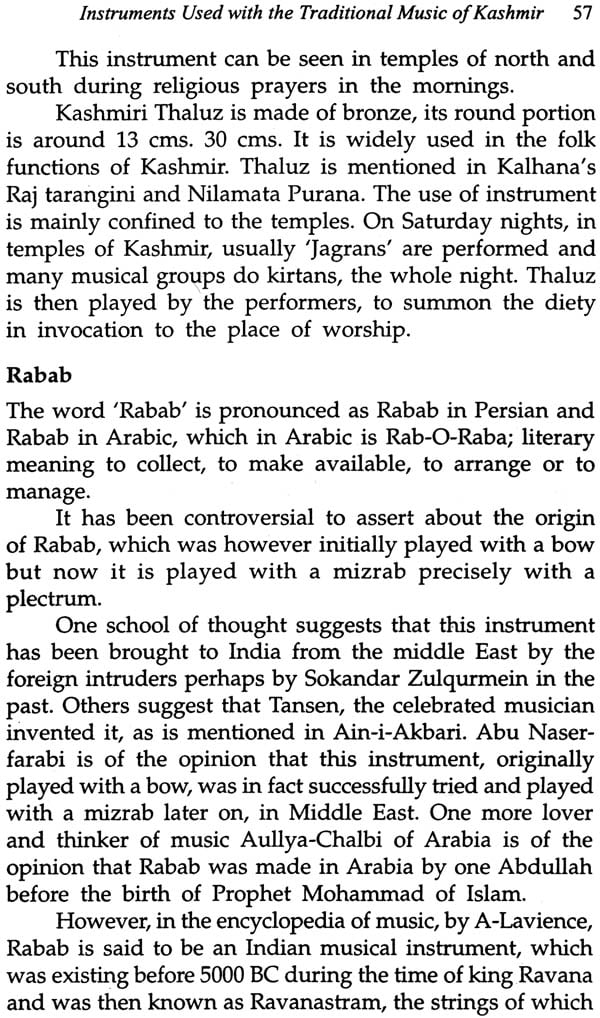 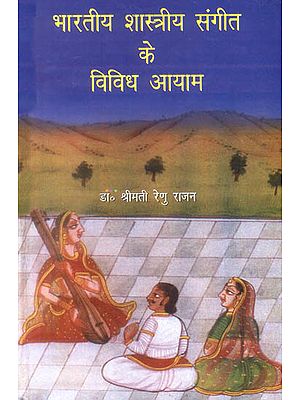