I feel extremely elated to present the deliberations of distinguished scholars and eminent personalities who participated in the Hindu-Christian-Muslim Dialogue Symposium organized by Somaiya Vidyavihar at Mumbai from 20th to 22th January 2005. it was the world and Traditional National Religions congress held at Astana (Kazakhstan) in September 2003 that inspired me to undertake the venture of organizing such an Interfaith Dialogue.

The Congress at Astana was a unique enriching experience. The initiative taken by the President of Kazakhstan H. E. Mr. Nursultan Nazarbayev and his presence throughout the conference for three days has left a deep and indelible imprint on my mind. He talked individually to every participant. He closely monitored the procedure like a corporate head supervising a corporate meeting. He was simple and sincere, genuinely committed to the cause. He added a personal touch to the Congress by leading the tour of his new capital.

The congress was conducted in a spirit of total freedom. The Declaration of Participants of the congress openly recognized 'the right of each human person to be freely convinced, choose, express and practise his/her religion'. For me it was a revelation of the potential of the Interfaith Dialogue. The seed of the idea to organize a Hindu-Christian-Muslim Interfaith Dialogue on Somaiya Vidyavihar campus was sown during the Astana Congress.

The main objective of this Dialogue Symposium was to provide a platform and project the enlightened moderate voices of the Hindu, Christian and Muslim faiths. Keeping this core concept in mind we arrived at an apt theme for the deliberations during the Interfaith Dialogue-'world Religions- together for Peace.

It would be appropriate to mention here that we at Somaiya Vidyavihar have been actively organizing Interfaith Dialogue meetings since 1997. So far, we have organized nine Hindu-Christian Interfaith Dialogue seminars - three in Rome (Italy) and six in Mumbai (India). It is not a mere academic exercise but a mission for us.

My interest in religious tolerance and harmony, in fact, began with the foundation of K. J. Somaiya Bharatiya Sanskriti Peetham in 1989. My late father Padmabhushan K. J. Somaiya, a great visionary and humanist established this small but only one of its genre institute to train teachers in Indian Culture and Values. The immense responsibility of shaping the minds of young children of impressionable of shaping the minds of young children of impressionable age is entrusted upon the teachers. Therefore he thought it necessary to train the teachers. Comparative Study of religions formed a part of the syllabus. Scholars and priests practising that particular religion were invited to teach the same. This facilitated the undistorted presentation of every religion bringing the best of it to the notice of the trainees.

It was good providence that Msgr. Felix Machado delivered lectures on Christianity to the trainees. That time he was a professor in St. Pius College Seminary in Mumbai. Soon he was appointed a the Pontifical Council for Interreligious Dialogue, Vatican as an official of the Asian Desk. Msgr. Felix and our institute developed such a deep bond of affection and respect that we are now almost a family. He introduced us to the Pontifical Council for Interreligious Dialogue and we arranged our first Hindu Christian Dialogue in October 1997 on the theme 'Hindu - Christian Cosmology and Anthropology'. A series of seminars for Hindu-Christian Dialogue followed. Our visits to the Pontifical Council for Interreligious Dialogue at Vatican and our meetings with Cardinal Arinze, President, PCID and Archbishop Michael Fitzgerald, then Secretary of PCID and his subsequent visit to inaugurate Inter-religious dialogue Seminar in 2003 built confidence in us regarding the potential of Inter-religious Dialogue as a means to nurture harmony and peace amongst the followers of different religions.

Initially, Institute for Interfaith Studies, Sassari, Italy and Benedictine Monastery of St. John at Parma, Italy were our collaborators. We also organized three symposia in collaboration with the Focolare Movement, a spiritual organization devoted to spread the message of love. Revered Madam Chiara Lubich, the founder-President of Focolare Movement has been a source of inspiration to us. The last two seminars were organized in collaboration with the Pontifical Urban University, Vatican. It was a great experience for us to interact with the professors and scholars from Pontifical Urban University, Vatican, one of the premier and prestigious institutes of Christianity; particularly Prof. Alberto Trevisiol, Rector of the University and Prof. Benedict Kanakappally. The spirituality both of them exuberated was really touching and it will always remain in our hearts.

I have the privilege of having the private audience of H. H. Pope John Paul II many times. I was invited to participate in the inter-religious meeting to usher the new millennium in 1999 in Vatican. Due recognition was given to our efforts for Dialogue as Dr. Mrs. Kala Acharya, Director of K. J. Somaiya Bharatiya Sanskriti Peetham was invited to speak on Hinduism.

Again I was present in the special meeting convened by the Pontifical Council for Interreligious Dialogue to celebrate the 40th anniversary of the Council in May 2004. I participated in the Parliament of Religions at Barcelona, Spain in 2004. I was fortunate to be invited as a representative of Hinduism during the Pontification of H. H. Pope Benedict XVI in Vatican.

My experiences of interfaith dialogue have enriched me as a person and made me realize that there is a consensus on spiritualism in different religious traditions.

Tri-dal - A Trilateral Dialogue Hinduism, Christianity and Islam - is an attempt to present the intrinsic similarity of message of the religious traditions represented by Hinduism, Christianity and Islam. It is our first venture into the challenging area of dialogue with Islam. I seek best wishes and cooperation from every possible quarter for the endeavour of establishing peace and harmony, which is the need of the hour. Let us hear the clarion call of God and join our hands, heads and hearts to undertake the journey towards peace which the mankind deserves. 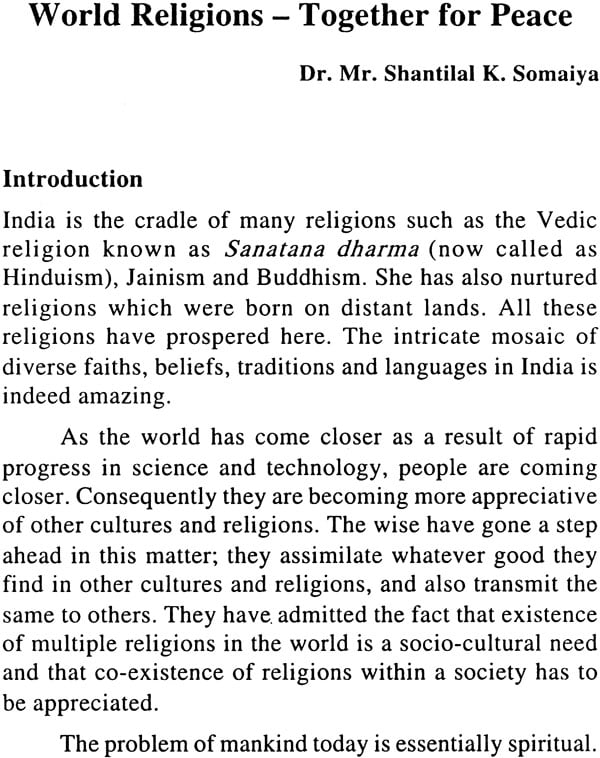 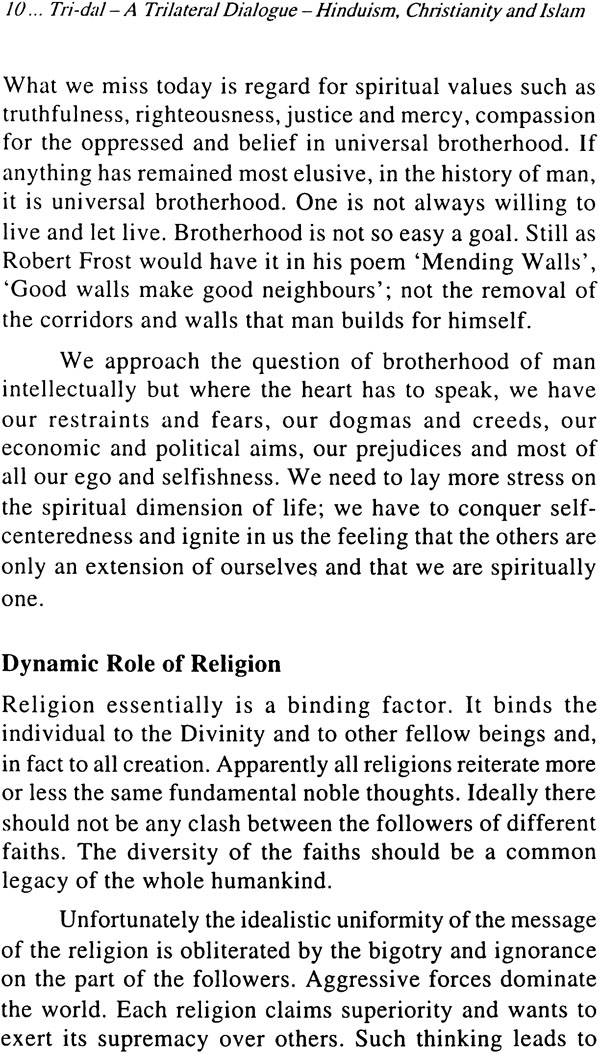 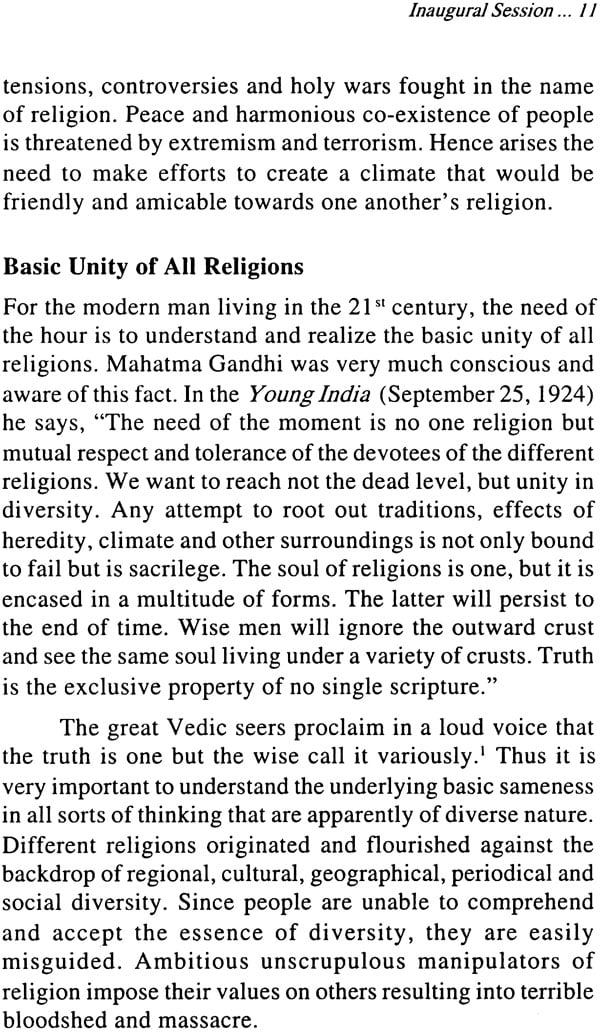 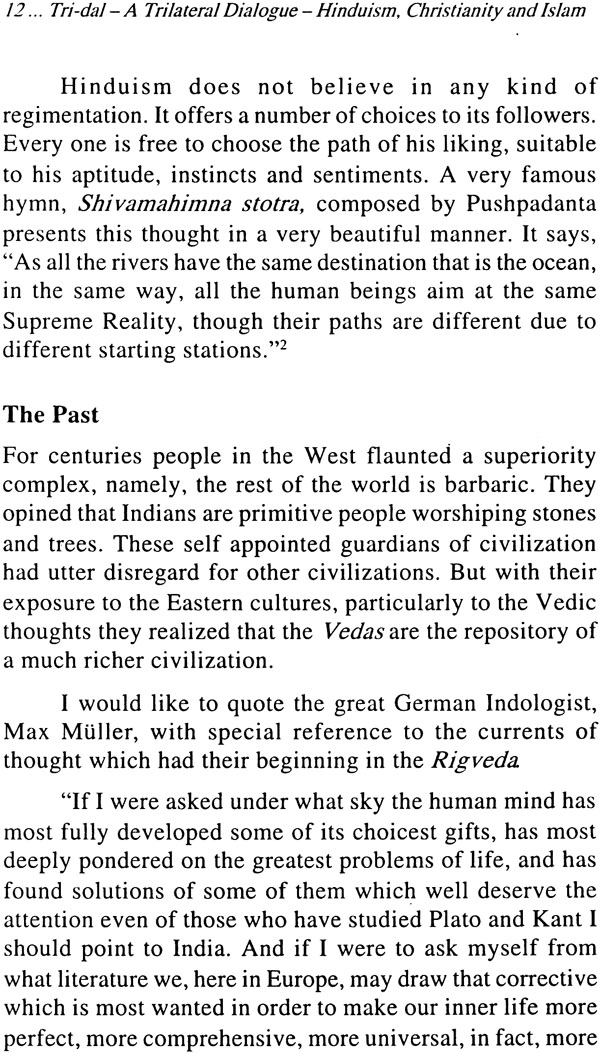 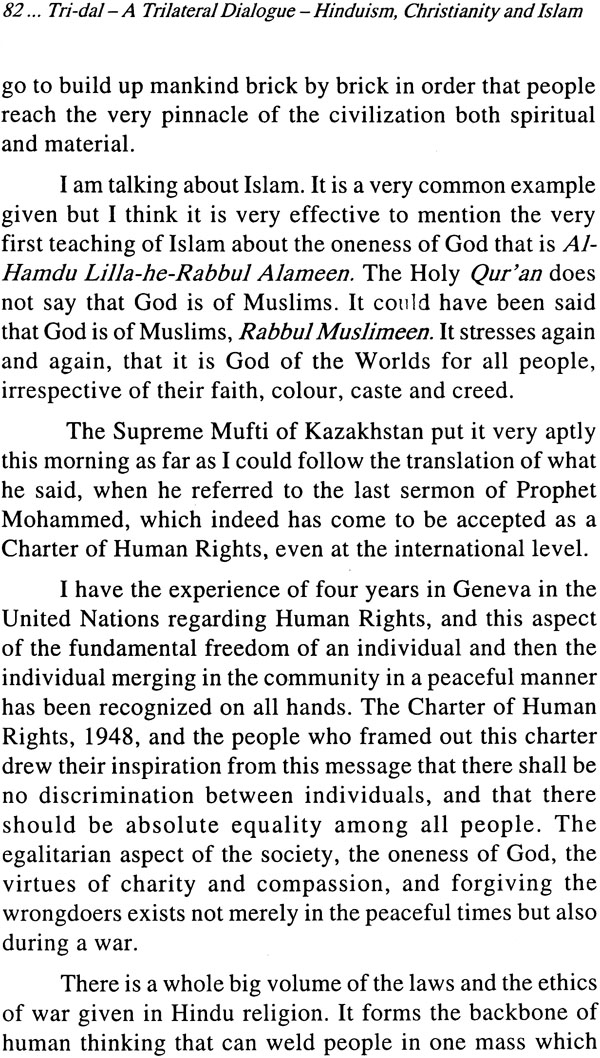 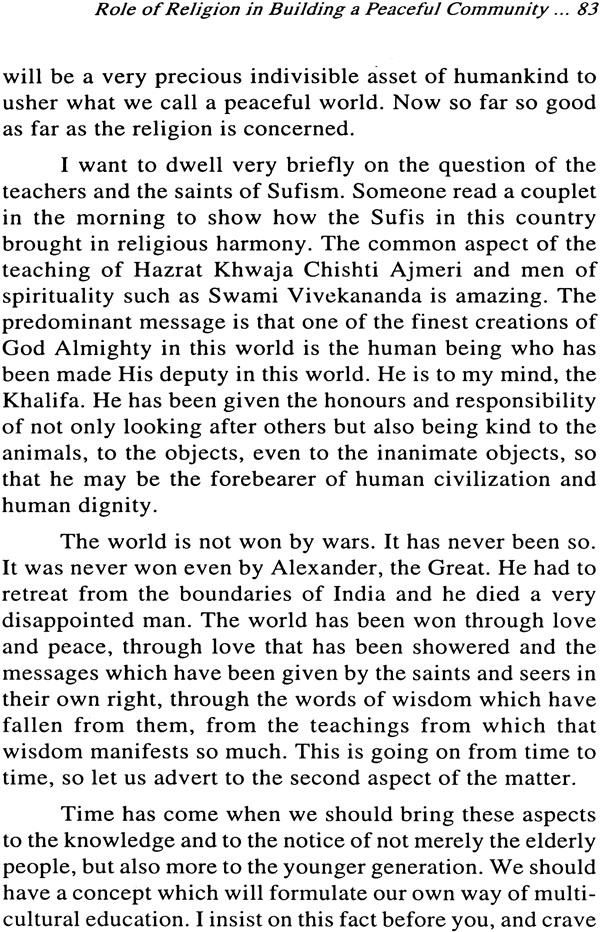 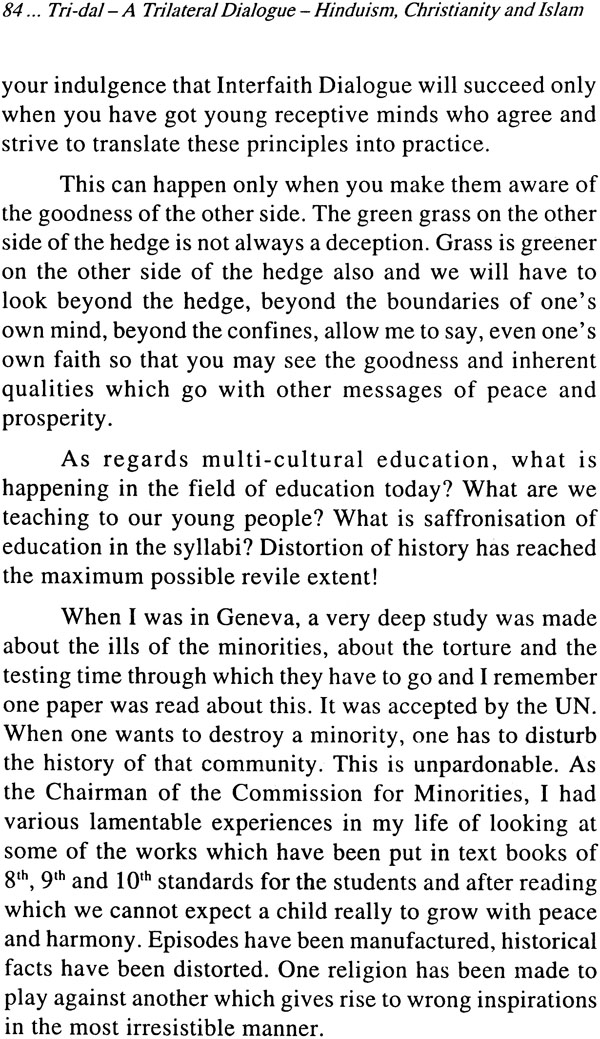 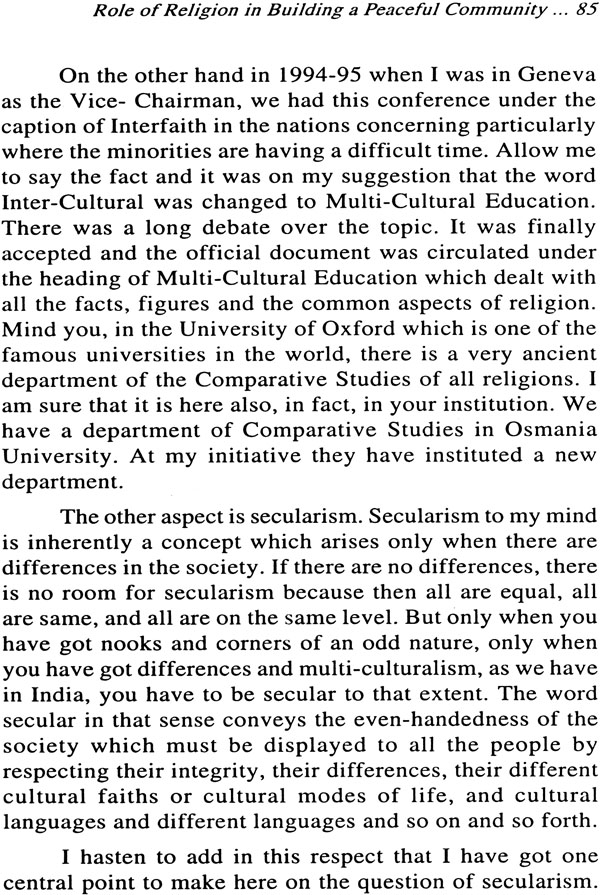 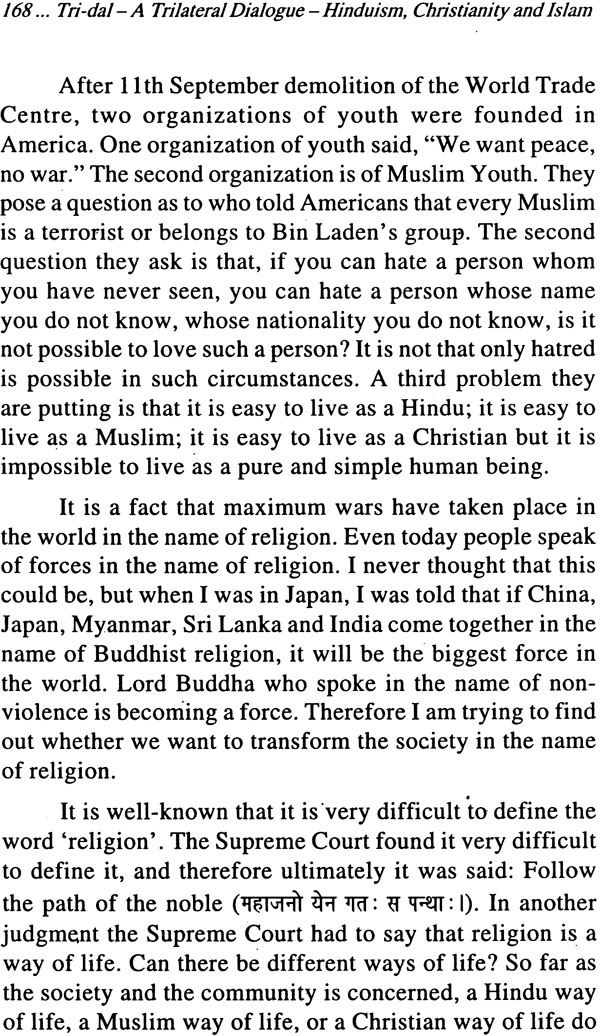 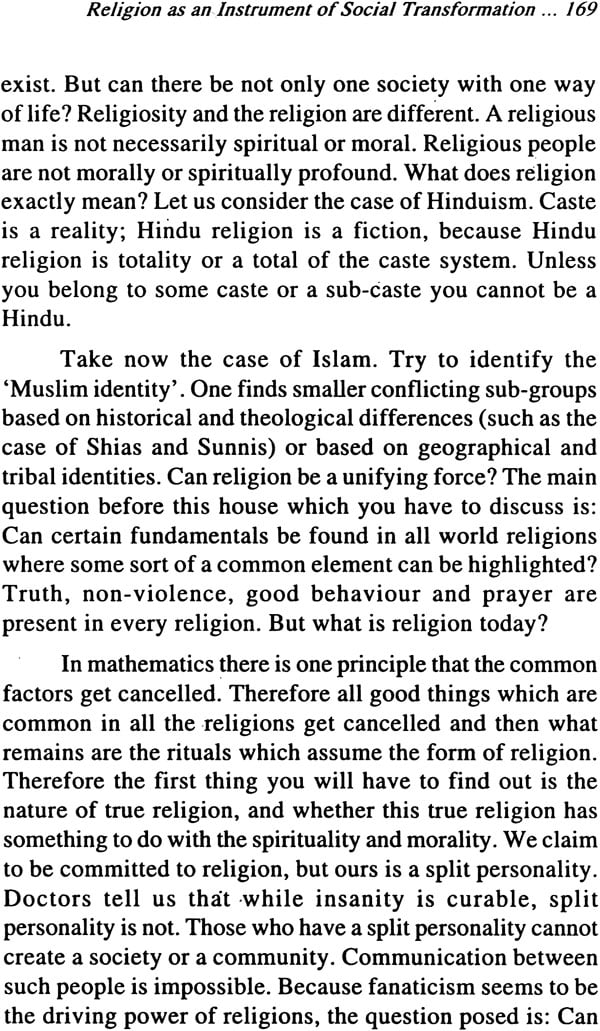 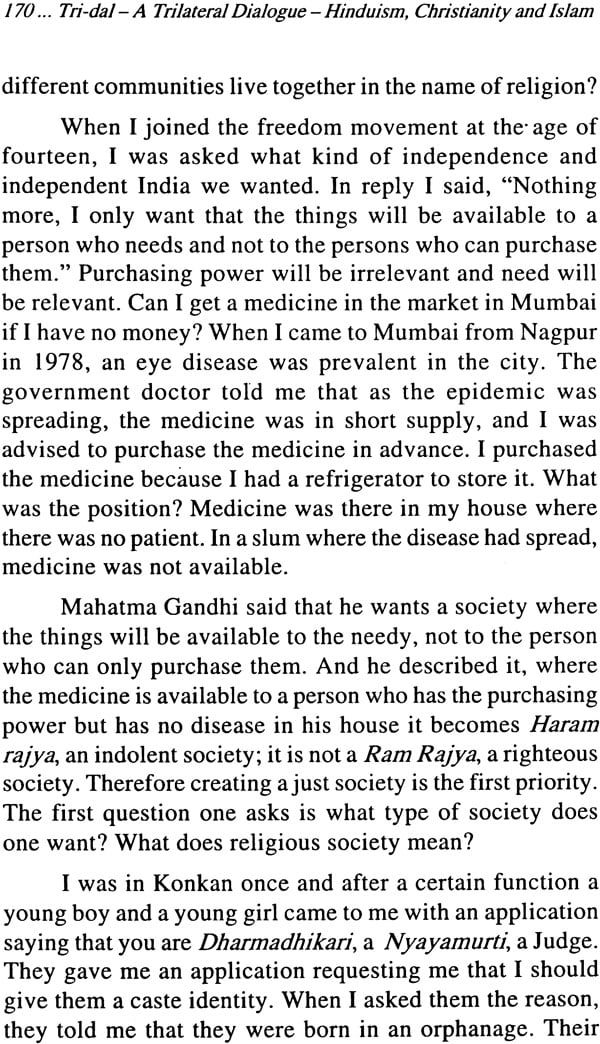 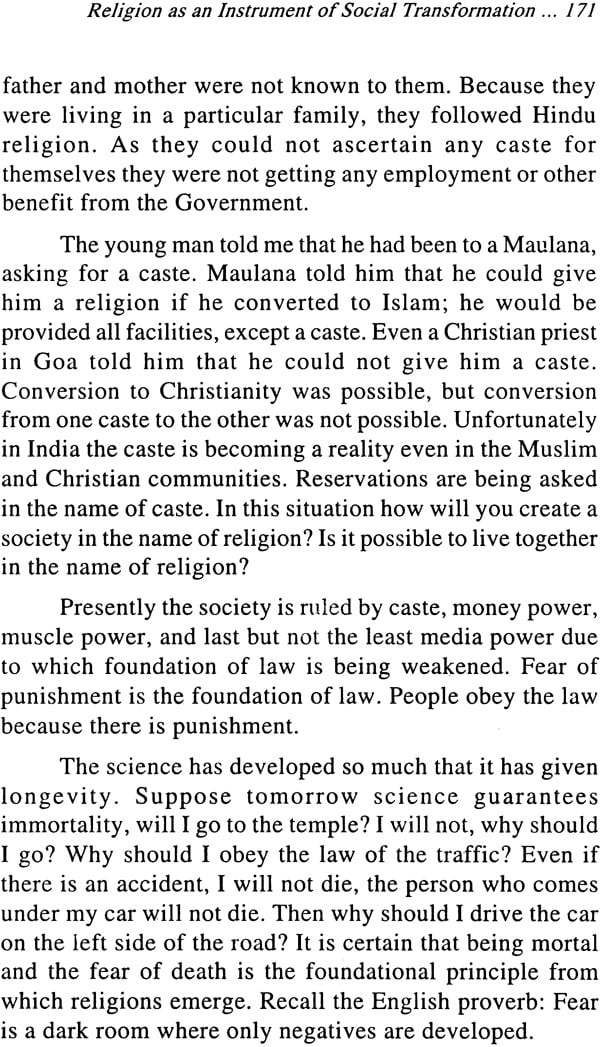 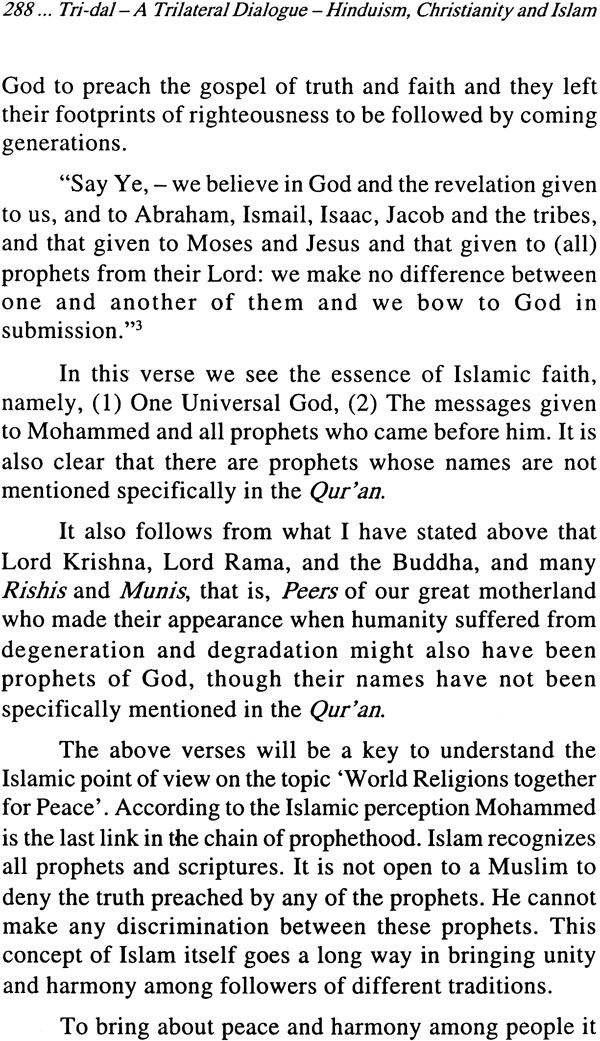 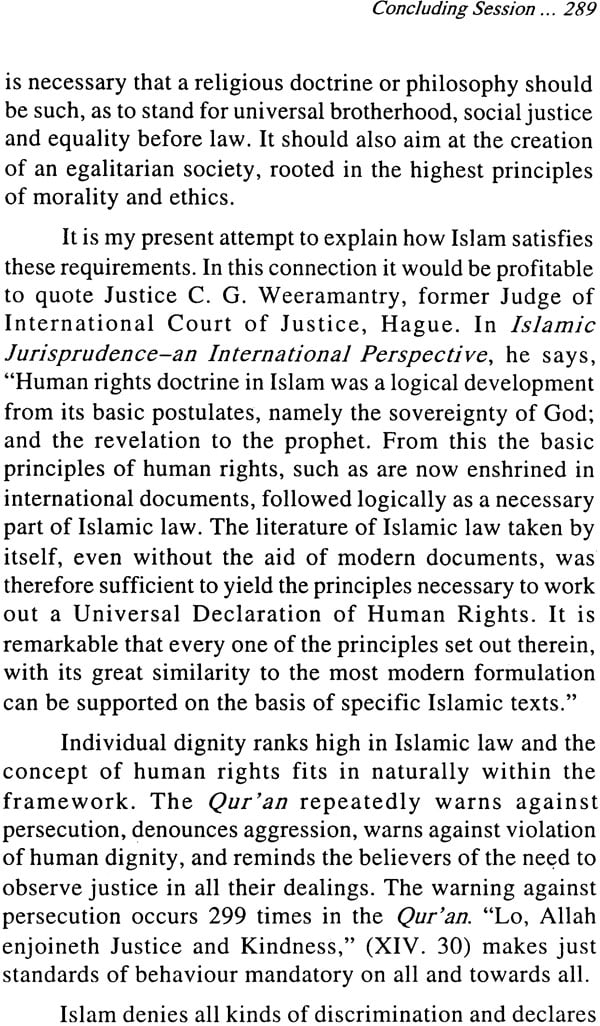 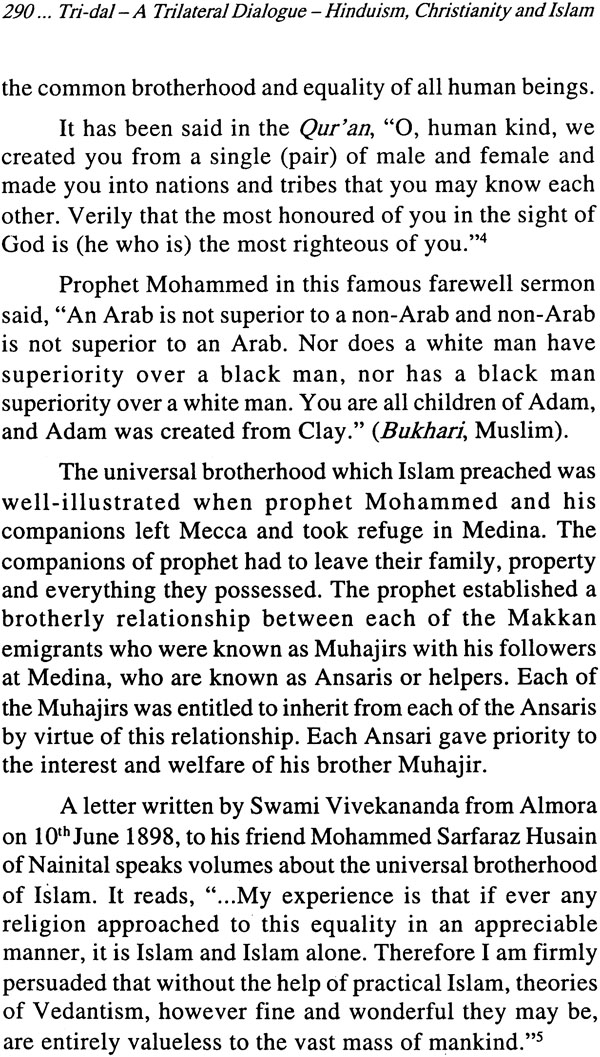 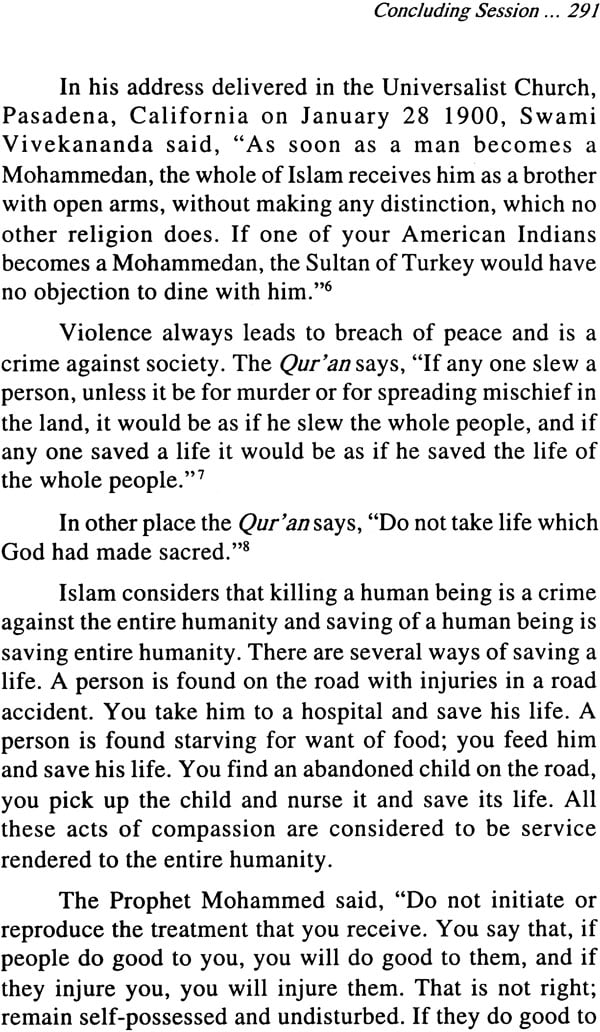