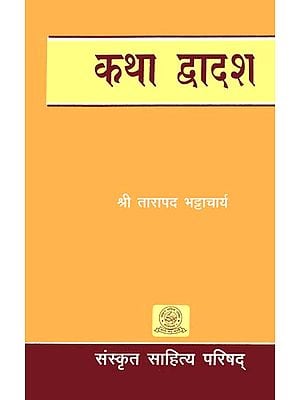 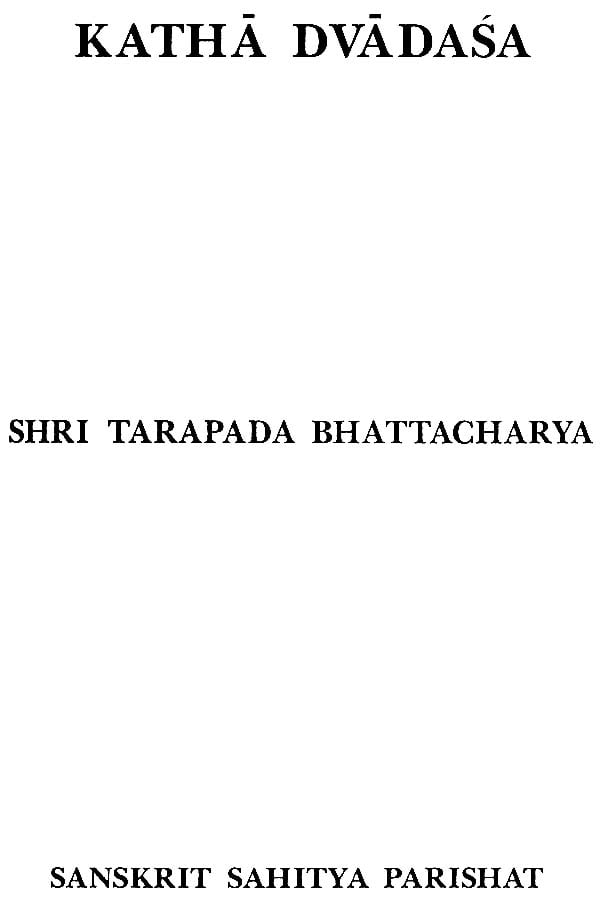 It is often said that Sanskrit is a dead language and it is neither a spoken language nor a language for writing in this century, which is marked by tremendous scientific and technological advancement. It is not certain as to whether Sanskrit was a spoken language, -a language for communication in earlier days, but it is a fact that literary artists in pre-Christian era as also in earlier centuries of Christian era had employed only Sanskrit for the purpose of writing specimens of literary art as also other types of writings. It is equally interesting to note that the volume of writings in Sanskrit in the nineteenth and twentieth centuries, as a matter of fact, have witnessed the efforts carried out by a number of literary artists and theoreticians, philosophers and social thinkers, structuring their compositions in Sanskrit, giving expression to even the most modern theories and thoughts on certain fundamental issues relating to the problems of life. The strenuous efforts put by literary artists in carving out divers specimens of literature have given rise to certain genres hitherto unknown in the field of Sanskrit literature. Thus, Fiction has come into being, and the same is the case with Short Story, concerning the characters of human beings.

Ancient Indian wisdom was aware of the existence of two types of Prose Romances,-Katha and Akhyayika, the first of which presents an invented plot, while the second was intended to handle a plot based on history. Thus, the Katha was legendary in character, while the Akhyaika was somewhat historical in nature. The stock examples of these two types of prose compositions are furnished by the Kadambari and the Harsacarita, both emanating from the pen of Banabhatta who basked in the sunshine of Harsavardhana’s favour. Short Stories were not unknown to Indian talent, but these centered round the characters of birds and beasts, as a result of which the stories assumed the character of beast-tales and beast-fables. Thus, the Pancatantra has emerged as the most successful compendium of beast-tales and fables, and this has been followed by Hitopadesa, an equally interesting collection. These beasts, dealt with in these stories, however, are representatives of human beings,-some standing for the pious and honest, trying to extend helping hand to all, some standing for the wicked and the villain, trying to further their own interest at the cost of others. It is not without reason that the tales and fables structured by Visnusarma and Narayana are meant for the purpose of imparting instructions to the members, the intellects of whom are not in a position to penetrate deep into the Sastras. These beast-fables first of all attract the minds of such members towards them and then tender advice in the sweet charming manner of the beloved.

Fictions and Short Stories are creations of the modern mind. While Fiction carries with it some of the specialities of Prose Romances and Short Story demonstrates the influence exerted on it by beast-tales and fables, both these betray their indebtedness to modern Fictions and Short Stories. A Short Story is to depict a glorious moment; which shines in its effulgence for all times to come, creating profound impact on the minds of connoisseurs. The Short Story is necessarily to be marked by preponderant employment of the Function of Suggestion, which, naturally, is intended to bring into light several tiers of meaning. As a result of this employment of the Function of Suggestion, the Short Story does not express through. Denotation whatever is intended to be presented by the artist, but leaves many things unsaid, enabling the mind of the connoisseur to interpret it in whatever way he likes. Just as Lyric suggests something more than what it expresses, similarly Short Story also suggests something more than what is expressed by it through the Function of Denotation. As a result of this the melody of Lyric and Short Story continues to vibrate in the minds of the connoisseurs even after Lyric and Short Story have completed their journey. The journey of Short Story may be complete at the end of it, but its circuit gets itself completed only after the symbolic content is ascertained and this symbolic content has many dimensions and tiers; once a tier of this symbolic content is unfolded it serves as the stepping stone to locate another tier and this process goes on continuously till the final symbolic content is comprehended. It is at this point that Short Story differs from Fiction. In Fiction everything is communicated through expression; in Short Story more importance is put on the Function of Suggestion, which, when triggered into action, communicates a number of meanings, keeping the melody of the story ringing in the mind of the connoisseur for a considerable period.

A writer of Short Stories is required to handle the Function of Suggestion with great care and also to acquire rich experience in regard to the workings of human heart. The job of a story writer is extremely difficult. In a small span of writing he is required to present the excitant and the ensuent, the transitory and the permanent moods, and also to trigger the Function of Suggestion into action, so that the symbolic content conveyed by the story continues- to ring in the ears of the connoisseurs. It is a matter of great joy 4tat all the qualities of a profound story-writer have combined in Professor Tarapada Bhattacharya, who possesses a commendable command over Sanskrit idioms and expressions and, at the same time, has acquired rich experience in regard to the functioning of different emotions of the human mind. Professor Bhattacharya has thorough acquaintance with Short Stories of a number of literature, including English and Bengali, Hindi and Russian, and the rich experience which he has obtained has helped him in structuring Sanskrit stories in a remarkable manner, contained in his collection of stories - “Katha dvadasa” going to be published by Sanskrit Sahitya Parishat, Kolkata. In some of these stories, Professor Bhattacharya has presented the Tragic by a few small touches of his pen, and the. Tragic presented is too deep for tears. In some stories again he has presented the Comic with equal felicity by creating funny situations which make the readers roll into laughter. In some stories again sarcasting flings have been cast at the folly of an individual or a society as a whole, and the sarcasm, though having stings is harmless. Bhattacharya, as a matter of fact, has given eternity to moments created in his Short Stories, and this has enabled him to find a comfortable place in the community of successful story writers.

In the realm of Sanskrit literature Short Stories are not huge in number. It is refreshing to note that twenty-first century has got a profound Sanskrit scholar, who is in possession of all the equipments necessary for construction of Short Stories. It is because of such writings that Bengal can expect to occupy front seat again in the field of Sanskrit literary writings.

I congratulate Professor Tarapada Bhattacharya and welcome his collection of Short Stories” Katha dvadasa” to the domain of Sanskrit literature, all the time hoping that this collection is going to establish itself as a profound contribution of the talent of Bengal to the arena of Sanskrit.

I am glad to announce that the collection of twelve Sanskrit Short Stories with the title Katha dvadasa is going to be published under the banner of Sanskrit Sahitya Parish at, Kolkata. These fascinating, thought-inspiring, lively,juicy as well as spicy stories originated from the pen of the powerful story- teller Professor Tarapada Bhattacharya are sure to go to estimate. All the twelve stories contain adequate dramatic flavour and they have been composed by an author who has great literary talent. These stories cannot be classed in any of the traditional branch of Sanskrit literature, for they have been established in a distinct literary class by themselves. In form these are Short Stories or Fictions, but in nature these include unique pieces of dramatic elements. Professor Bhattacharya is frank and direct to bring before us some acute social problems that haunt and unnerve human beings often and again. A mindful reading of these twelve stories will make the readers of the present generation aware of the fact that even some baffling social why-s and how-s can be well corroborated through a language that has often been marked with the adjective ‘religious’ by a section of ‘buffoons’ - claiming themselves ‘academicians’. I agree with the statement of Professor Rita Chattopadhyay whose research works centre around Modern Sanskrit Literature, that almost all of his works are so captivating and absorbing that one can’t just leave it without finishing.”

All these stories are highly enjoyable because of their new and interesting contents, simple style as the method of presenting a story. The author’s command over Sanskrit language is beyond any controversy. I like to quote here Prof. Rita Chattopadhyay’s remarks on the general nature of Prof. Bhattacharya’s stories-

“Tarapada’s serious works e.g., Radha, Saivali touch the inmost recesses of our hearts and testify to the author’s highest power of penetration into the cores of human hearts and into our conflicting feelings as well, whereas his comedies e.g., Pattakasthika, Atha Bhejalakatha etc., provide us with hearty laugh and highest relaxation. In his stories we find all varieties of humour e.g., the humour of action, situation, character and of words as well. His ‘humour’ is never coarse or vulgar and for its effect it depends on puns of words and situations as well. The foreign words e.g., ceyara (chair), poca (egg-poach), haoyai sarta (hawai-shirt) etc., have most comfortably been used by this scholar. Thus the Stories of Prof. Tarapada Bhattacharya, deserve to be commended as undoubtedly novel ventures in many aspects, in spirit, in style and of course in theme too.” (Modern Sanskrit Literature).

I like to mention here that Iyam Prthvi and Jivanatrsna reveal, among other things, the author’s philosophy of life, while Madanena Krtam shows his keen delight at the amour of two souls fallen in the meshes of Cupid.

I am sure that readers of Sanskrit literature will find so far untasted flavour from the twelve stories contained in the present book. We are grateful to Prof. Ramaranjan Mukherjee for presenting us with an erudite foreward touching therein all the aspects of Prof. Tarapada Bhattacharya as a unique story-teller. Thanks are due to Sri Debashish Bhattacharya for printing this book in a befitting manner. 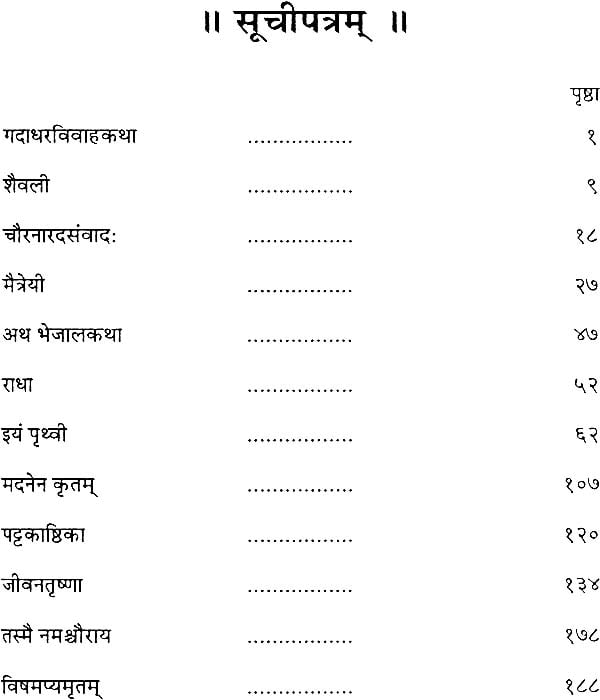 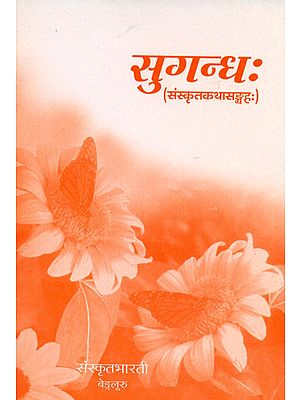 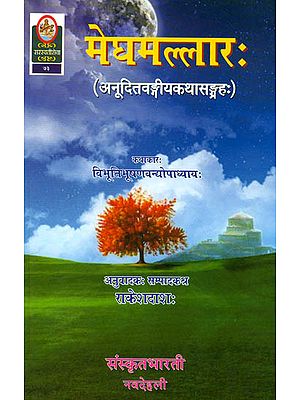 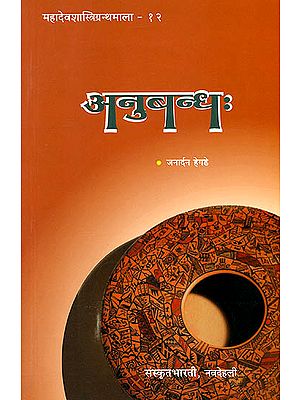 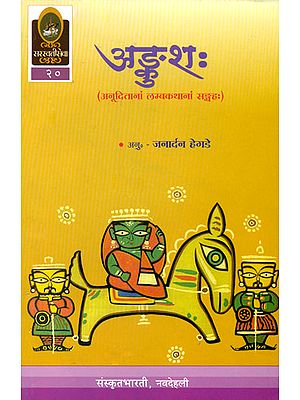 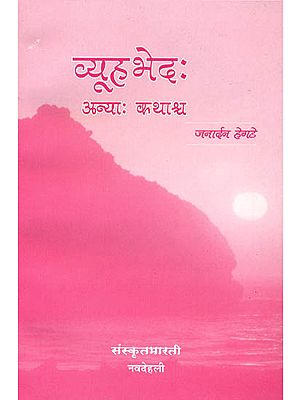 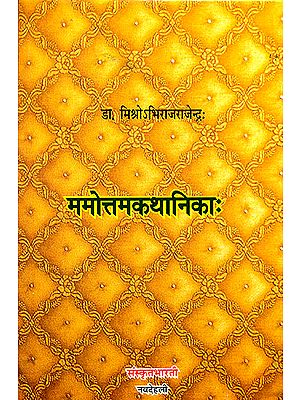 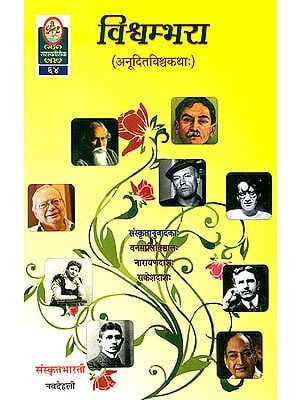 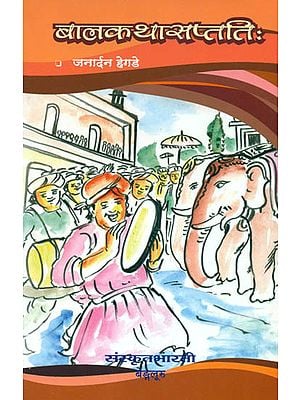 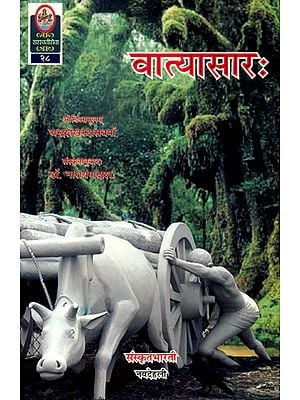 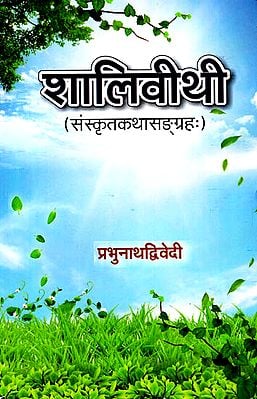 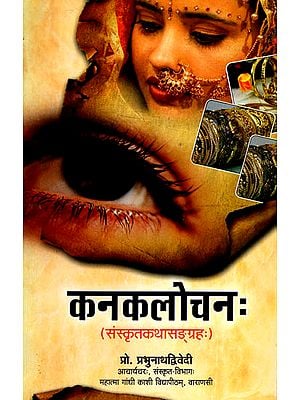 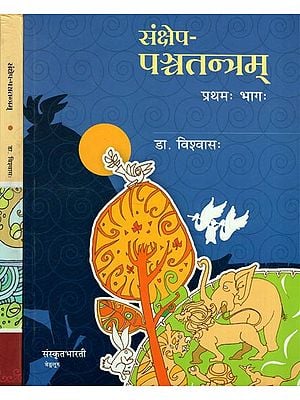 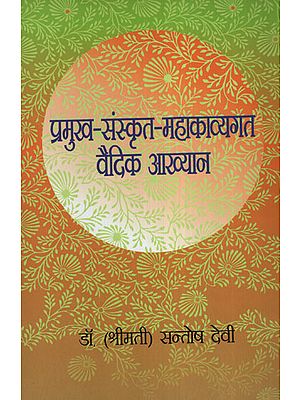 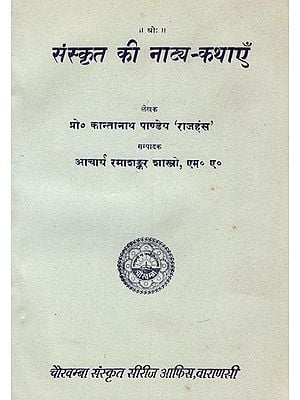 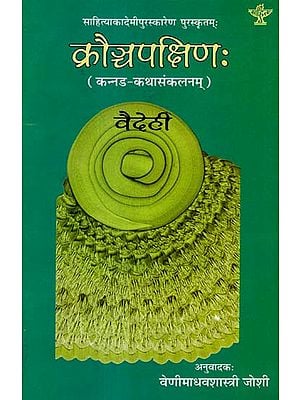