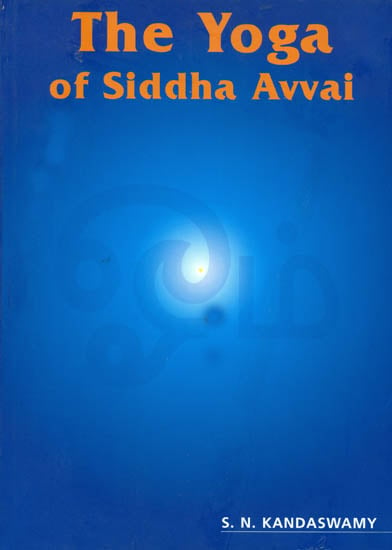 Avvai is considered to be one of the most influential sages among the Tamil speaking people of south India. Her poems and literary works, dating from the first millennium of the modern era are recited by millions of Tamil speaking school children in south Asia to this day. A huge statue of her stands along Marina Beach Drive, in Chennai, along the shore of the Indian Ocean. The values and wisdom which her poems convey, however, has a source. It is this source which the present volume, The Yoga of Siddha Avvai, sheds much new light upon with the inclusion of her text Vinayakar Akaval. The author takes us on a literary, historical and spiritual tour of ancient Indian culture, and in so doing, helps us to understand her origins and greatness.

Like her illustrious forebearer, the Siddha Tiruvalluvar, whose influence on Tamil culture and values, through his classic Tirukkural, is universally acknowledged, Avvai was also a Siddha Yogi. While Tiruvalluvar was a disciple of Agastyar, and brother disciple of Babaji Nagaraj, the originator of Kriya Yoga, Avvai claims that her Guru was the sound of Aum, the Pranava itself, personified in the form of Ganesa, who taught her Kundalini-Yoga. Her poetry invokes the presence of the Guru, and then ignites within the reader the flame of spiritual consciousness.

It also points to the esoteric practice of Kundalini-Yoga as the path that leads to enlightenment and God realization. Her's is a wonderful example of arrupadai, the Siddha's ideal of showing the path to others. If the purpose of human knowledge is to alleviate human suffering, then that knowledge or wisdom which eliminates suffering completely is the most valuable. Like all of the Siddhas, she shared her wisdom with this purpose. Their teachings are universal, non-sectarian, and very much needed in today's suffering world.

Students of Kriya-Yoga, Kundalini-Yoga, Jnana, and Tantra as well as devotees of Ganesa (Vinayakar) and students of Tamil literature and culture will all find much insight and greater understanding of their path as a result of studying this volume. Readers familiar with Avvai's moral sayings may be surprised to learn of the origins of her wisdom, and be inspired to apply themselves to Yogic sadhana.

Born in the village of Elaiyur, near Jayangonda Cholapuram, Tamil Nadu in the year 1936, and after acquiring his doctorate Degree for his dissertation Buddhism As Expounded in Manimekalai in the year 1970, Professor S. N. Kandaswamy served in various capacities in the Tamil Department of Annamalai University (1958-1979), Annamalainagar, Department of Indian Studies, University of Malaya (1979-1985), Kualalumpur and Department of Literature, Tamil University (1985- 997) Thanjavur. He was sometimes Visiting Professor in the International Institute of Tamil Studies, (1997-1999), Chennai. He has published 35 books in Tamil and English and also many research articles to his credit. The Indian Council of Philosophical Research, New Delhi published his research projects with the titles Advaitic Thought in Tamil (2000) and Encounter between Saiva Siddhanta and Advaita Vedanta (2002). He has translated Sundarar Devaram into English with elaborate notes and concordance. He has been a regular contributor of review articles to The Hindu, Chennai. Participated in many national and international seminars and presented papers on Buddhism, Vedanta, Saiva Siddhanta and Tamil Classics. Awarded Gold Medal and many research prizes for his contribution to Tamil. Recognizing his service to the cause of Tamil culture and philosophy, the titles Siddhanta Kalanidhi and Tamilakarar are conferred on him respectively by the Head of the Dharmapuram Adheenam (1984) and Head of Kunrakudi Adheenam (1992). At present, he is involved in the study of the Tamil Siddhas.

The Yoga of Siddha Avvai is the result of the research carried out by the author during 2003-2004 under the sponsorship of The Yoga Siddha Research Center, Chennai and Babaji's Kriya Yoga Order of Acharyas. The Tamil Siddhas as a class of yogins, poets, mystics and physicians have a perennial history of not less than 2500 years. Though their personal life is shrouded in mystery, their poems are saturated with rich materials which reveal their spiritual methods, ethical perfection, metaphysical experience and above all human concern. Their works have not received much attention and full recognition for a long time, perhaps because they questioned the established institutions such as the caste system, scriptural supremacy, temple worship, and other religious or orthodox conventions. They were radical in the sense of wanting to go directly to the root or source of truth, without stopping in any of the above half way houses. They championed the cause of the downtrodden and advocated social concerns to show the path to one and all. Unlike the Vedic systems and also the anti-Vedic systems viz., Jainism and Buddhism which talked much about the impermanence and perishable nature of the human body, the Siddhas developed methods to strengthen the physical body through Yoga, kundalini breathing, herb and mineral formulae. These served to prolong one's span of life, enabling not only Self realization, but an integral transformation at all levels of existence. Their unique contributions to the enrichment of our culture and literature have been largely under- estimated.

The present book is an attempt to clarify some of the significant aspects of Siddhas and their poems. It comprises six chapters. The opening chapter chronologically traces the Siddha elements in the Tamil classic right from the times of Tolkappiyam, the earliest available Tamil treatise (500 B.C.) down to the period of Mahakavi Subramaniya Bharati, who was not only the great luminary in the galaxy of modern Tamil poets b also was a great Siddha himself. The second chapter elucidates the characteristic features of a true and perfect Siddha, as revealed in the own poems. The connotation and significance of their names, the holy places associated with their yogic life, their numbers, historical anecdotes in their poems etc., are also discussed in this chapter.

In the next chapter, the literary aspects of the Siddha poetry are identified and analysed in detail. Their language, the prosodial feature folk-art forms, literary genres etc., formed the main theme of this chapter. The fourth chapter is exclusively devoted to study the life and times Avvaiyar, the female Siddha. Whether there was one Avvai who lived an extremely long time, as did many of the Siddhas, or whether there were several poetesses with the name Avvai is the subject of son controversy. Those who are familiar with the literature and practice the Yoga-Siddhas, can easily accept the former hypothesis. Scholars are those unfamiliar with Siddha Yoga have a great deal of difficulty, accepting the possibility that Siddhas like Avvaiyar and Tirumular could have lived for hundreds of years. It is the position of some scholars that there were at least three poetesses in the name of Avvai among who the Siddha Avvai lived in the 8th century A.D. She composed Vinayaka Akaval and Auuai-k-kural; besides some manuals on ethics and morals. The subsequent chapter deals with the cult of Vinayaka in Tamil Nadu. It has been pointed out by T. N. Ganapathy and others that the Siddhas d not worship local deities, but used their names in their literature with reference to powers associated with the cakras. Vinayaka or Lord Ganesha, is thus the personification of the power and consciousness the muladhara-cakra in the form of Pranava. Pranava is the primal sound Aumkara. It is also known as mula-mantra, since it is first pronounced before uttering any mantra.

Avvai wrote Vinayakar Akaval, a lengthy poem expressing her piety and personal experience as a disciple of the divine preceptor in this form, who taught her Kundalini - Yoga. The translation of this text with word by word meaning, summary and commentary formed the nucleus of the sixth chapter. In the elucidation of the text, apt quotations from standard works such as Tirumandiram are presented and explicated. At the end, bibliography, glossary, index, etc., are annexed.

It is essential to note that in the dissemination of the teachings of the Siddha and their practical relevance to everyone all over the world, the signal service of Babaji's Kriya Yoga Order of Acharyas Trust deserves special mention. Its founder-trustee Sri Govindan Satchidananda has been doing yeoman service to the promotion of Yoga Siddha Research not only through his valuable publications but also establishing centers in various parts of the world to propagate and to practise the teachings of the Siddhas. Sincere thanks are due to Sri Neelakantan, Secretary, Babaji's Kriya Yoga Order of Acharyas Trust, Bangalore, whom the author had occasions to meet and discuss. They have aptly identified Professor Dr. T. N. Ganapathy to be the dynamic Director of The Yoga Siddha Research Center, Chennai. It is pertinent to note that Professor T. N. Ganapathy has made a thought provoking study on The Philosophy of Tamil Siddhas, published by the Indian Council of Philosophical Research in 1993. His recent publication with the title The Yoga of Siddha Boganathar, Vol. 1, is a milestone in the history of study of the Yoga Siddha literature. The author is beholden to Professor T. N. Ganapathy for his constant encouragement, kindness and courtesy which enabled him to successfully complete the project, The Yoga of Siddha Avvai within the time-frame. He is thankful to Dr. KR. Arumugam, Deputy-Director of The Yoga Siddha Research Center for providing him some useful books, related to the subject. It is the bounden duty of the author to express his sincere thanks to his wife Smt. K. Yamunadevi who always takes care of his health, besides looking after the domestic obligations, thus sparing him to fully concentrate on serious studies. 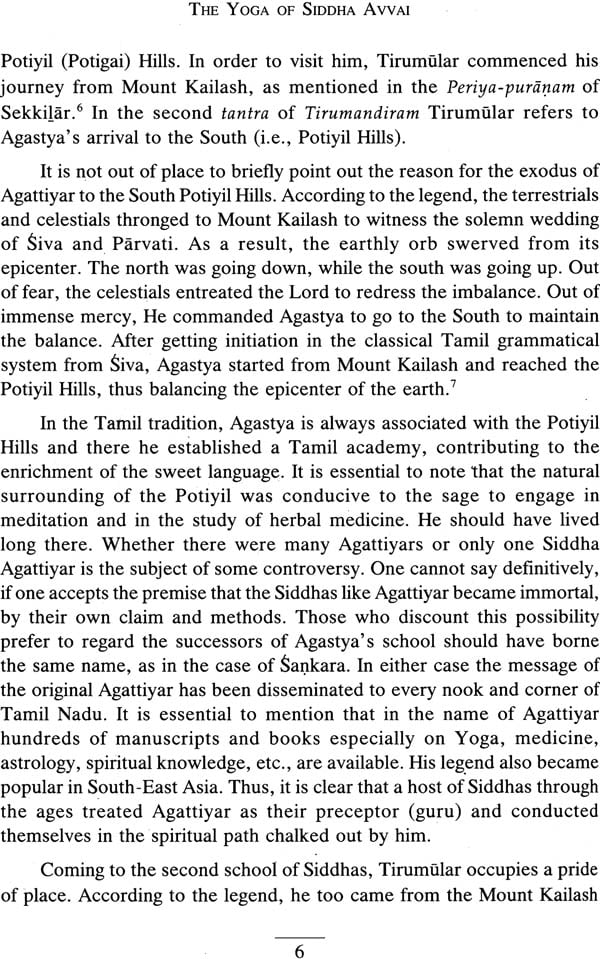 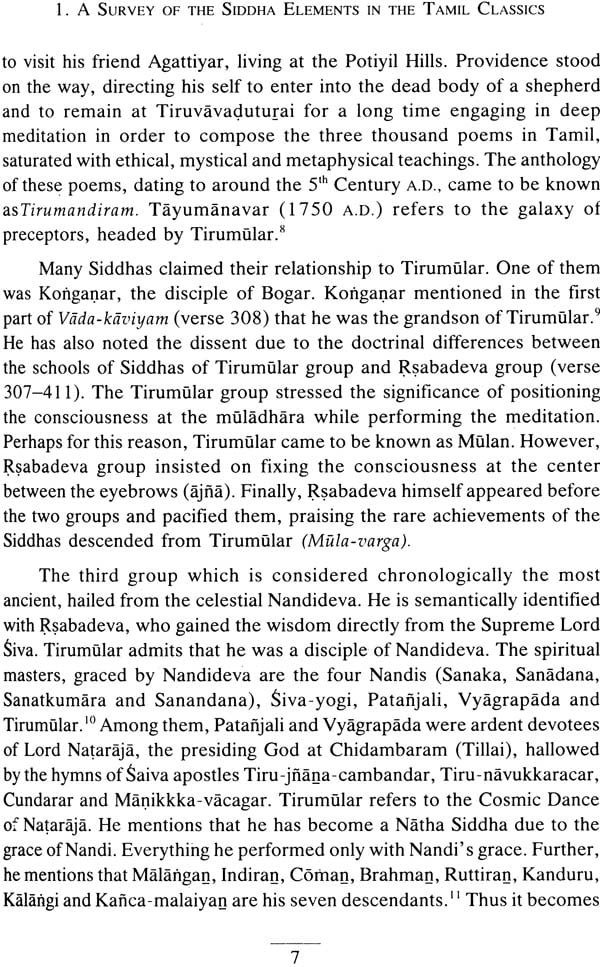 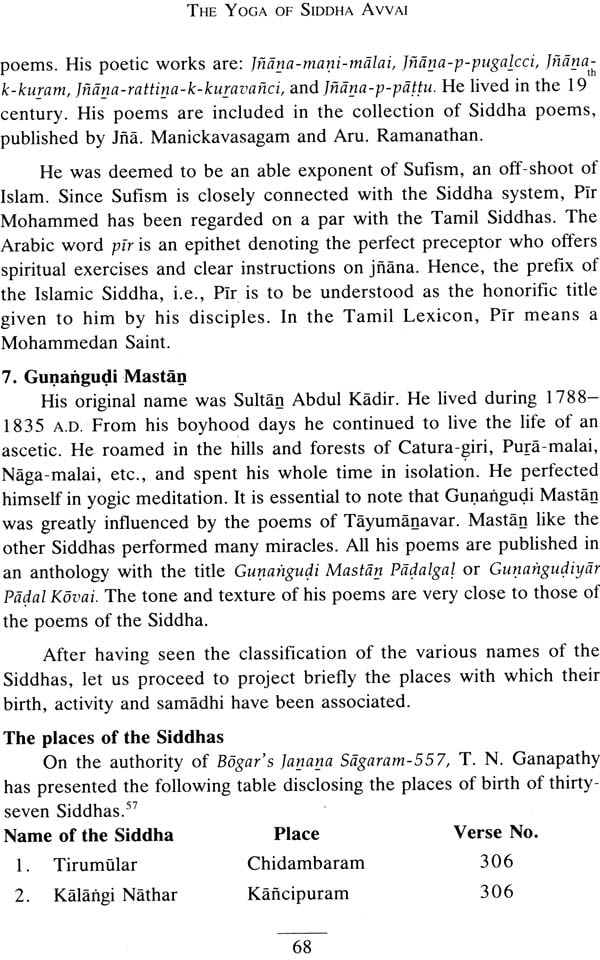 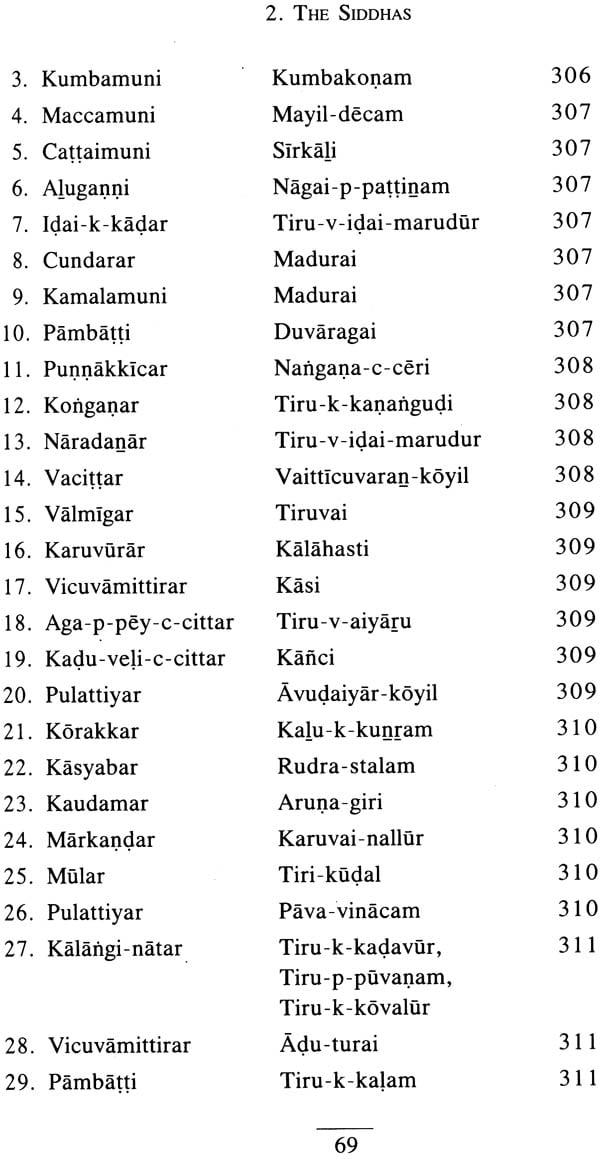 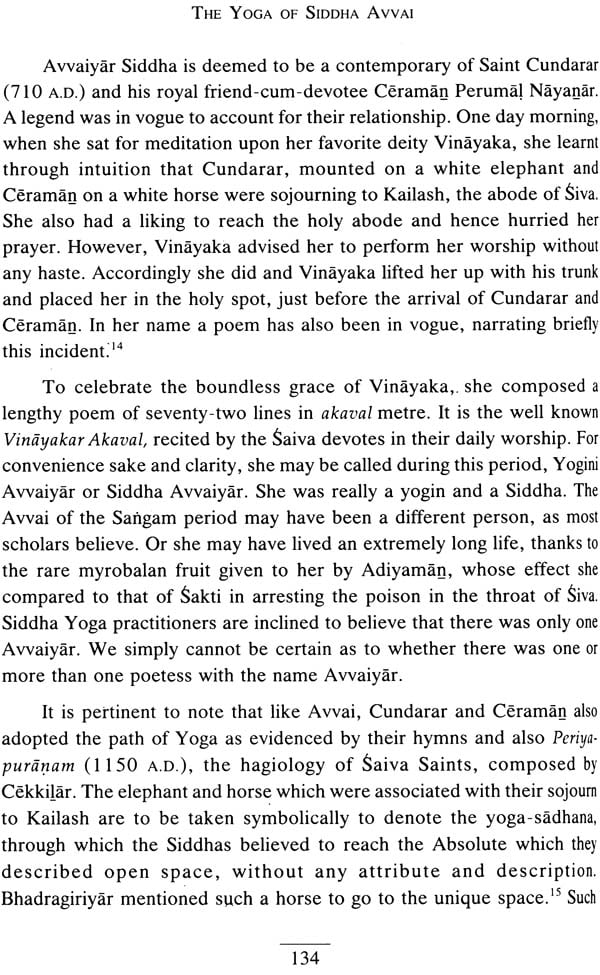 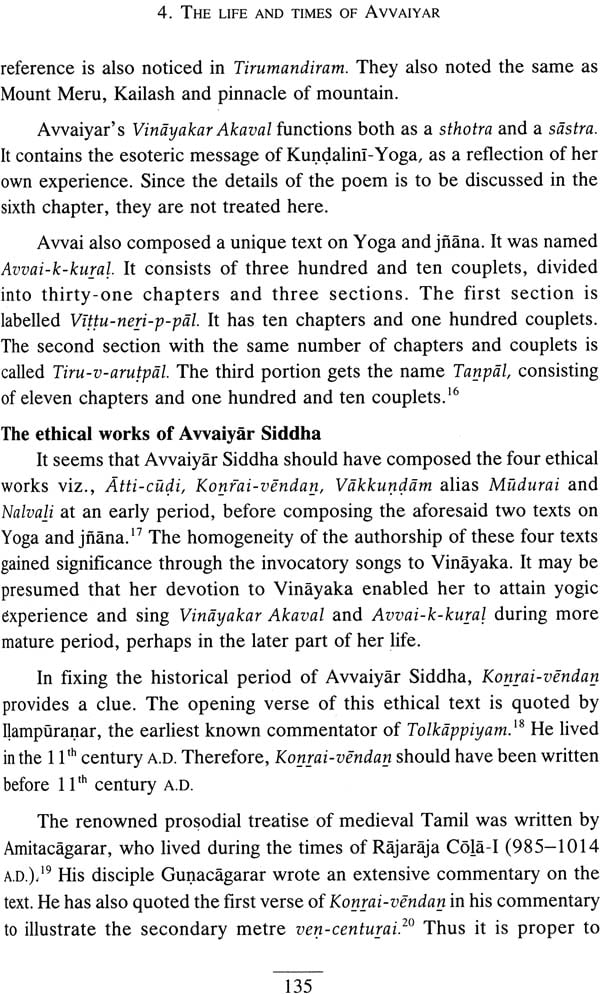 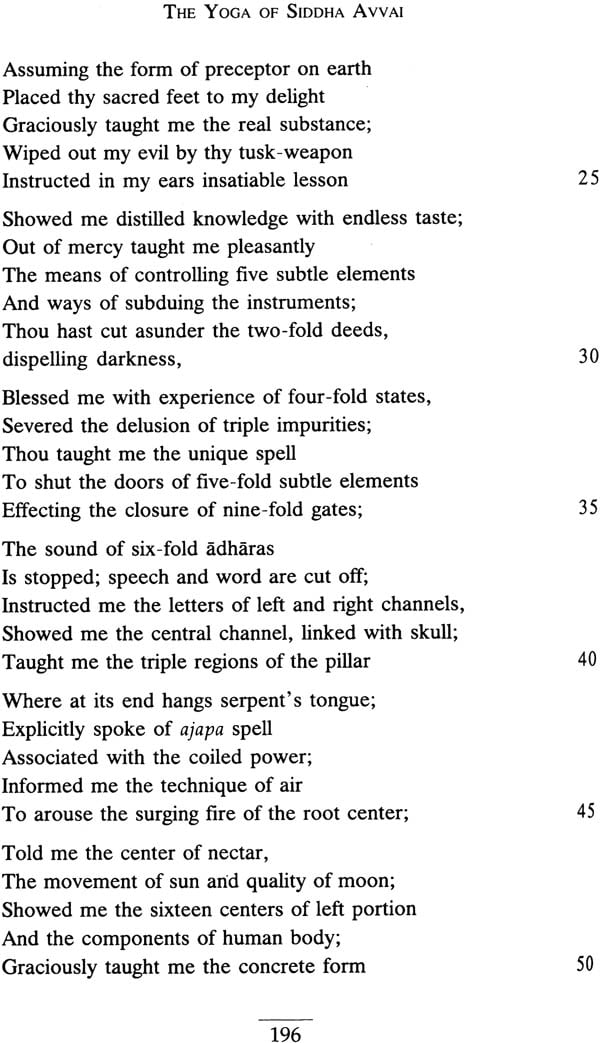 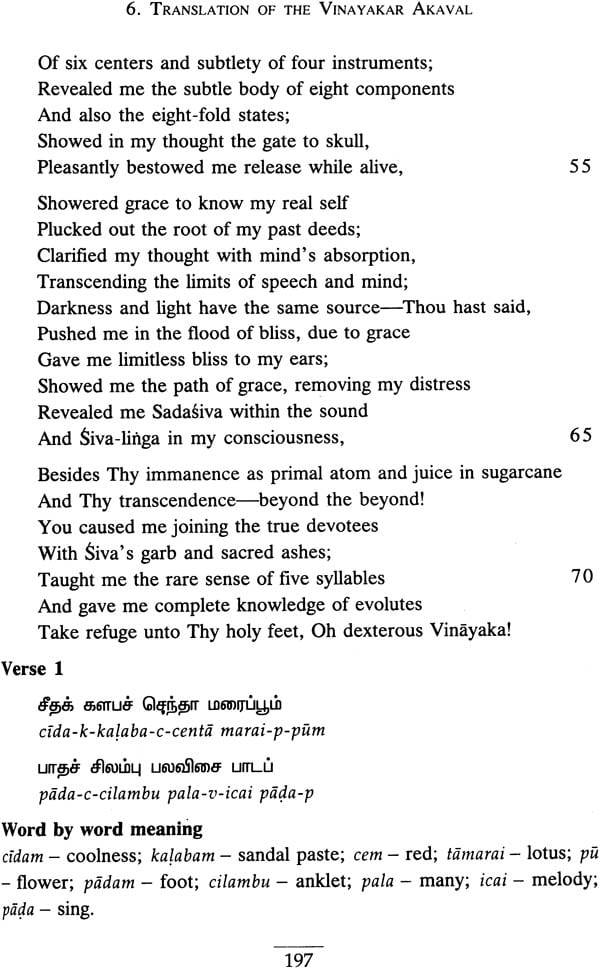 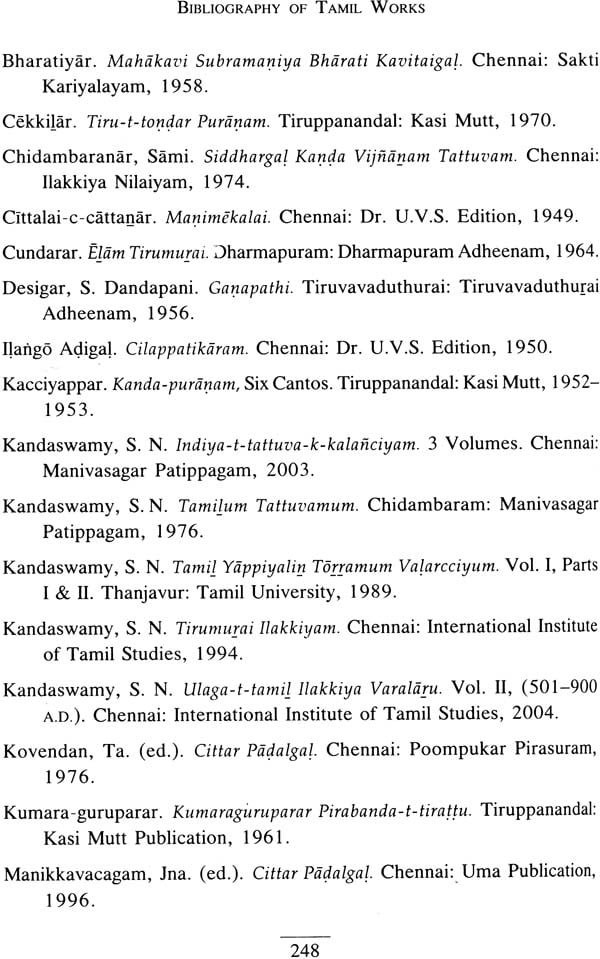 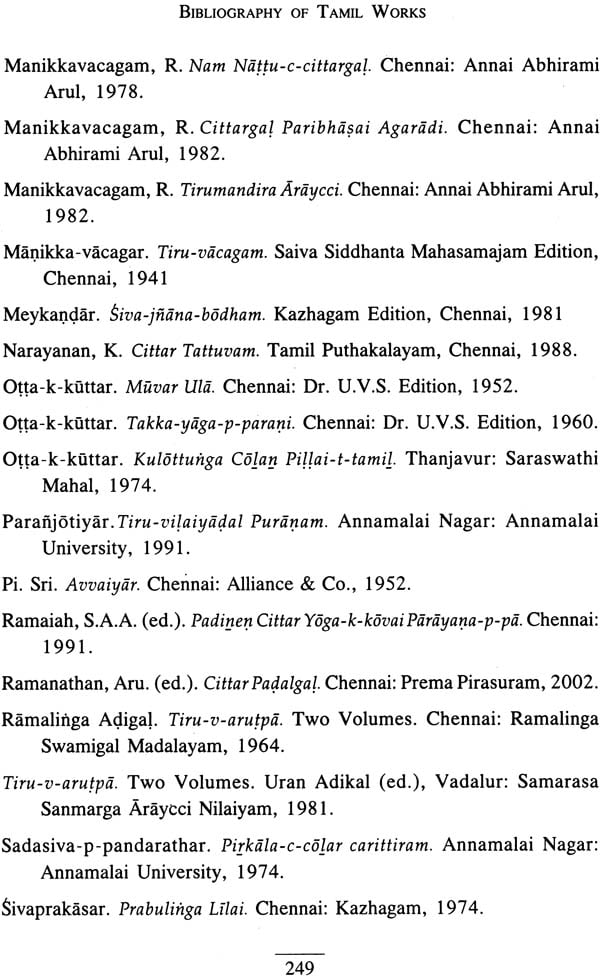 Kriya Yoga Sutras of Patanjali and the Siddhas
By M. Govindan
$31
FREE Delivery 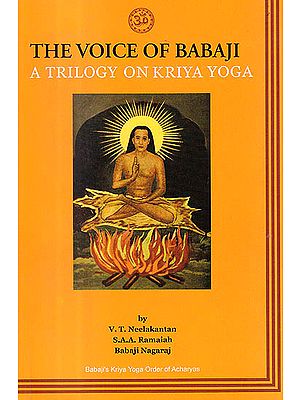 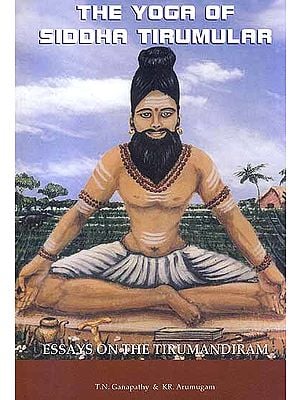 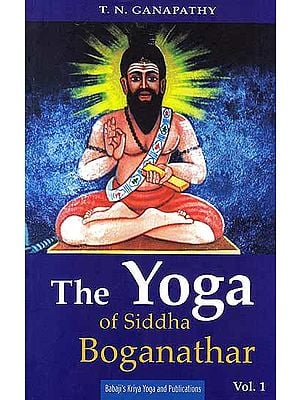 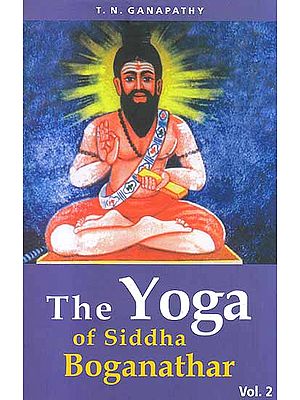 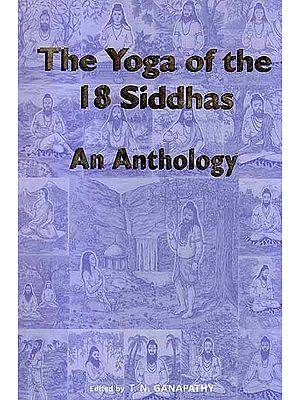 The Yoga of the 18 Siddhas (An Anthology)
By T.N. Ganapathy
$53
FREE Delivery
Best Seller 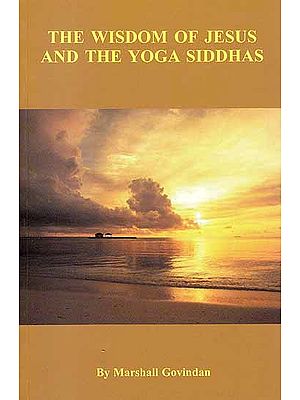 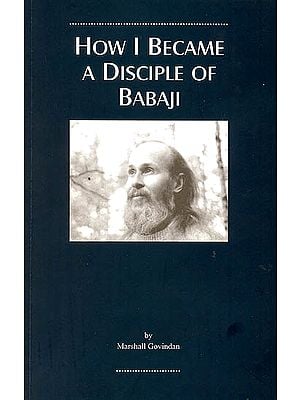