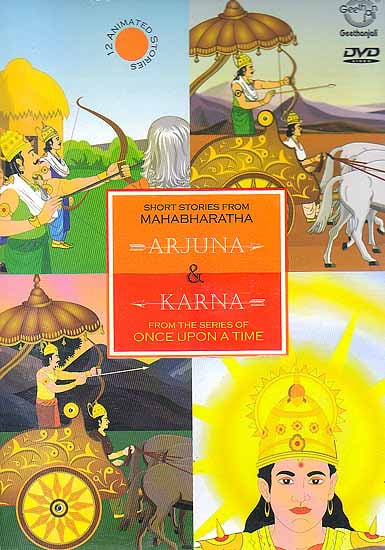 $23.50
Quantity
Notify me when this item is available
About the DVD

From the Series of Once upon a Time.

The one whose very name means doer of great deeds Arjuna the third of the five Pandava brothers and the son of Kunti and Pandu is revered in Hindu mythology as a just ruler and a brave warrior. One of the key figures in the Mahabharatha a few of his adventures are highlighted in these unique stories. They bring to mind a legendry hero whose trails tribulations and triumphs are still recalled with fondness and awe.

Arjuna’s Aim
In this legendry story Arjuna proves his prowess in archery when Guru Drona Decides to test the skills of his students.

Arjuna and the Hunter
This story recounts how Arjuna persuades Lord Shiva to give him his Pasupata Astra or divine weapon. Which he needs in order to battle with the Kauravas.

Gurudakshina
This is the tale of the Gurudakshina that the Pandavas and Kauravas give to their teacher Guru Drona. On the request of their Guru they separately wage war against Draupada the king of Panchala.

Arjuna and the Monkey
In this story Arjuna takes up the challenge issued by a monkey who is actually Hanuman in disguise. Arjuna and Hanuman are both taught a lesson in humility by the divine Lord Vishnu.

Swayamvara of Draupati
This is the story of how Draupadi came to be the wife of all five Pandava brothers once again Arjuna proves his Amazing skills at archery.

Bed of Arrows
This story reveals the inner torment that Arjuna endures when the goes into battle with the Kauravas. In this tale Aruna displays his generosity of spirit when he comforts Bhisma in his last hours.

Karna - a name Synonyms with generosity of spirit and character. One of the greatest heroes of the Mahabharata. Karna remains, till date, an unforgettable personality and a source of inspiration for million of Indians and Hindus around the world. Some of his awe-inspiring adventures are recounted in this series which capture the essence of Karna his valor, his loyalty his courage and his code of honour. Through his death he was immortalized in the hearts and minds of the people who love him for all that he was and all that he became.

The Birth of Karna
The story accounts the birth of this legendry to Kunti and reveals the reason why she had to abandon him at birth.

Karna – The King of Anga
This is the story of the famous tournament held at Hastinapur and it also relates the tale of the clash between Karna and Arjuna.

Lord Krishna’s Game
This is the renowned story of how Krishna proved Karna’s generosity to the Pandavas.

Karna’s Curse
This is the story of Karna’s training in warfare by Guru Parasuram and it recounts the reason why the great Guru cursed him.

The Death of Ghatotkacha
This narrative unfold the battle between the Pandava’s & Kaurava’s and relates how Karna Kills Bheema’s son the mighty Ghatotkacha.