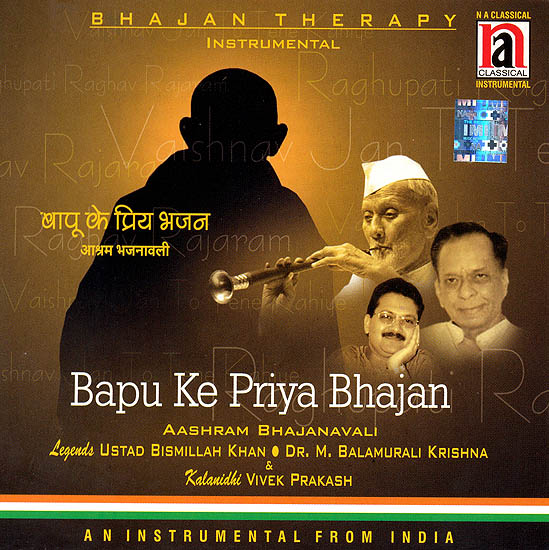 Ustad Bismillah Khan
Ustad Bismillah Khan is the third classical musician after Pt Ravi Shankar and Smt M S Subbulakshmi to be awarded Bharath Rathna, the highest civilian honour in India. The gentle genius of Bismillah Khan is perhaps single handedly responsible for making Shehnai a famous classical instrument. Traditionally used to play music during marriages, Shehnai is the counterpart of south indian nadaswaram. It is also used to play music in temples. Born in a small Bihar village in 1917, Ustad Bismillah learned shehnai from his uncle who used to play in the famous Vishwanath temple of Varanasi. He brought Shehnai to the center stage of indian music with his concert in the calcutta All India Music Conference in 1937. There was no looking back. Bismillah Khan is now one of the most respected musicians and well sought after. Yet his lifestyle has not changed. It retains the old world charm of a Benaras life ... his chief mode of transport is still the cycle-rikshaw! I'm still reminded of the great music he played for Kannada film Sanadhi Appanna, where RajKumar played the role of the gentle genius of a Shehnai player.

Padmabhushan Sangeetha Kalanidhi Dr. M. Balamurali Krishna
Padmabhushan Sangeetha Kalanidhi Dr. M. Balamurali Krishna was born on July 6, 1930 at Sankaraguptam (a small hamlet in Rajolu Taluk, East Godavari District in Andhra Pradesh) to Mangalampalli Pattabhiramayya anSuryakanthamma. He inherited the musical traits of his parents. His father, Pattabhiramayya was a famous flutist and a music teacher and Suryakanthama was a notable veena artiste. His father entrusted Balamurali to 'Gayaka Sarvabhauma' Parupalli Ramakrishnayya Pantulu under whose competent tutelage young Balamurali reached the pinnacle of fame in the field of music. In 1938, at the age of eight, during the Sadguru Arandhana Utsava, held at Vijayawada, Balamurali Krishna gave his first full- fledged performance. His greatest asset is his wonderfully vibrant, widely ranging, magnetic voice over which he has perfect control in all three octaves. He is very versatile and apart from being a vocalist, he plays the kanjira, mridangam, viola and violin. Balamurali Krishna has enriched Carnatic music with his compositions (over 400) and also through the creation of several new musical scales. He has created new ragas like mahati, sumukham, trisakthi, sarvashri, omkari, janasamodini, manorama, rohini, vallabhi, lavangi, pratimadhyamavathi, sushama, etc. Balamurali Krishna has also proved his talent as a playback singer, music director and actor in several languages.

Vivek Prakash
Vivek scored music for India's first Bhojpuri TV serial Saanchi Piritiyaa and many other TV serials and films like Aas, Manga Hai Pyaar Tumhi Se, Tapish (Awarded in Cairo Film Festival), Kahani Gudia Ki Vivek also has to his credit the composition and the lyrics of India's first Insured ad film of the famous hair oil 'Tel Rahat Rooh' featuring the legendary actress Hema Malini other than scoring music for almost 500 other Jingles and ad films till date. He has also composedpoem which is written by honourable president of India A. P J. Abdul Kalam. He has given over 2000 enthralling & spell binding performances full of variety and vigour, comprising Film songs, Bhajans & Ghazals, all over India and other countries of the world, prominent being Russia, Holland, Hong Kong, Philippines, Taiwan, Macau, Thailand, Indonesia, Malaysia and Japan etc .. He has many a music albums with various music companies and with many a leading singers like Anup Jalota, Jagjit Singh, Asha Bhosle, Sadhana Sargam etc... Prominent among these albums are Sentiments, Aghaaz, Amrit Kalash, Om, Durga Kavach, Amritvaanis, Om Namah Shivaay etc..

As longas you derive inner help and comfort from anything, keep it. Freedom is not worth having if does not include the freedom to make mistakes. Happiness is when what you think, what you say, and what you do are in harmony. Hate the sin, love the sinner. Honest differences are often a healthy sign of progress. Honest disagreement if often a good sign of progress. I cannot teach you violence, as I do not myself believe in it. I can only teach you not to bow your heads before any one even at the cost of your life. I want freedom for the full expression of my personality.

This is a unique instrumental product of bapu’s Bhajans ‘Vaishnav jan’ & Raghupati Raghav Raja Ram’ , which were a part of his daily prayer. These Bhajans are presented with different instruments, which deeply provides the listeners with inner peace and divinity. They have been re-created by the very talented singer and music director of the country ‘Kala Nidhi’ Vivek Prakash. It’s our belief that these tracks have the potential to create a pure and peaceful atmosphere wherever and whenever they may be played. Especially the precise presentation of the tunes by the two legends Ustad Bismillah Khan sahib and Dr. Bala Murali Krishna have made the product more valuable.