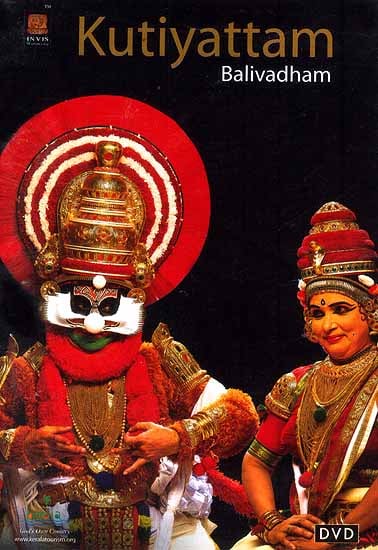 Kutiyattam Balivadham is an eventful part of the epic Ramayana. Lord Surya’s (Sun God) charioteer Aruna who assumes the form of a woman, begets a child from Lord Indra (Lord of Heaven) called Bali, and one from Lord Surya (Sun God) called Sugriva. Bali who becomes the King of Kishkinta has a misunderstanding with Sugriva leading to sibling rivalry. Ruma, Sugriva’s wife is forced to become Bali’s consort. Sugriva, fearing Bali, takes refuge atop the Rissyamukha Mountains, where Bali cannot enter owing to a curse from the Sage Mathanga. Sugriva along with trusted ministers like Hanuman meet Sri Rama, the incarnation of Lord Vishnu and offer their help to kill the demon king Ravana and to rescue Sita, the beloved wife of Rama. In return for Sugriva’s favour, Rama helps Sugriva confront Bali in a battle and Bali is killed by Rama’s arrow.

Kutiyattam is an artistic tradition of Kerala that goes beyond 2000 years. It is the only ancient form of Sanskrit theatre in the world which has kept alive its vibrant tradition till date. A typical Kutiyattam performance would take several days, even up to 40 to complete. The present form of Kutiyattam is ascribed to Kulasekhara Varma Cheraman Perumal, a king belonging to the ancient times of Kerala.

In the beginning, Kutiyattam performances were strictly confined to Hindu temples and were performed by the members of the Chakiyar community supported by the Nambiar community and their women folk, the Nangiyars. This Sanskrit theatre owes its name to the combined performance of Chakiyars and Nangiyars. The only musical accompaniment used earlier was Mizhavu, a percussion instrument played by Nambiars. Of late, Edakka, Sankhu and Kuzhithalam are also being used, besides Mizhavu. Kutiyattam is usually performed in a Koothambalam, which is a specially designed theatre attached to major temples. Koothambalams are built according to principles laid down in Vaasthusaasthram Silparatna, the text on traditional architecture.

Kalamandalam Sivan Namboodiri enacts the role of Bali in Balivadham.

Margi Sathi, one of the finest exponents of Nangiarkoothu has over three decades of experience in performing the timeless art forms of Nangiarkoothu and Kutiyattam. Currently she is part of the faculty for Kutiyattam at the Kerala Kalamandalam. She had also worked as a senior faculty member of Margi, Thiruvananthapuram; a premier centre for preserving the traditional classical art forms of Kerala. Margi Sathi is also the author of an attaprakaram (stage presentation manual) for Sreeramacharitham Nangiarkoothu.

Margi Sathi dons the role of Tara in Balivadham.

Margi Rama Chakiyar had his initial training in Kutiyattam from his uncle Ammannur Madhava Chakiyar. He later joined Margi and was trained under Muzhikkulam Kochukuttan Chakiyar and P. K. Narayanan Nambiar. He performs almost all the major roles in Kutiyattam. As a teacher and performer in the Margi troupe, Margi Rama Chakiyar has participated in several important art festivals in India and abroad.

The role of Hanuman is portrayed by Margi Rama Chakiyar.

The role of Lord Lakshmana is portrayed by Kalamandalam Kanaka Kumar.