108 Blosoms (From The Guru Granth Garden) 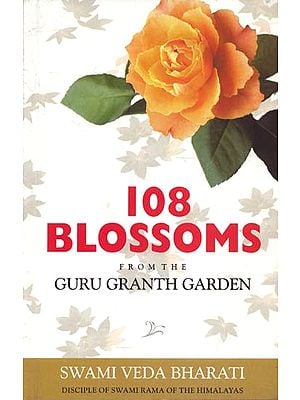 The Adi Granth, the First Book, does not rank first in chronological time, but bears the title as a vehicle of the First Truths that dawn when the supplicant approaches the throne of the - Timeless Person, Akal Purukh, by whose 'grace all one's exterior openings close', 'one's self is beautified', 'the light shines, and all the lotuses of consciousness come into full bloom'.

Some dive daily into holy rivers, but not a drop of sanctity clings to their limbs. The dive into the river Wei serves as a metaphorical exhortation for countless generations yet to come to 'immerse themselves into the company of saints':

God is the pool, God Himself the ocean,
This whole universe is but His own play.
As a ripple submerges into the sea all on its own,
So, says Nanak, He delights by Himself in Himself.
Thirty-six saints, widely separated in time and space, join in a sacred choir to sing of the glories of the Eternal One. Nearly six thousand songs grew out of this unified body of devotion, a vast Garden, as it were, every plant in it quick with the sap of the Spirit.

It is from this perennially fresh and living Garden that the 108 Blossoms have been gathered—to nourish you, revivify your spirit when it tends to sag, and help you stay at all times in the shelter of the Most High.

The joy that Guru Arjunadeva had experienced in bringing together the numerous songs into what is today the Sri Guru Granth Sahib is clearly reflected in this volume, and that joy will be the devout reader's as well—as near as one could get to a dip in the river Wei.

Sri Guru Granth Sahib is a unique Holy Book in that it embodies a confluence of diverse spiritual streams and theological traditions. Besides the Sikh Gurus, its contributors also include a large number of Hindu Bhaktas (of diverse caste denominations) as well as Muslim Sufi fakirs.

The Holy Granth in its entirety has been produced in elegantly rhymed verse in a medley of suitable meters, and set to the various Ragas of the Classical Indian Music. Throughout the Holy Granth there prevails an astonishingly consummate harmony of the themes with the diction employed, the meters selected, the structure of the verse, and the Raga to which they have been chosen to be set. That is why no translation of its content ever hopes to provide its message as well as its stylistic verities all-together. Hence, even those who have produced the full translation of the entire Holy Granth — such as Gopal Singh, Gurbachan Singh Talib and Manmohan Singh — have only been able to provide access to the message of the Holy Book shorn of its exquisitely charming and subtle artistic presentation. Where the translators have attempted some degree of versification, it has never been to approximate the sublimity of the original. Not withstanding this, it is not surprising that a fairly large number of scholars have'translated at least selected portions of this wonderful book.

Dr. Swami Veda Bharati is obviously one of those discerning spiritual scholars whom the fragrance of this unique Holy Granth seems to have inspired so much and he has chosen to share it with fellowmen. He has made a selection from the book for this purpose. I have not been able to find any other basis for this selection apart from what seems to have inspired Swami Veda Bharati. And this is, perhaps, the most important reason.

Dr Aparajit Chattopadhyay undertook to translate this selection. He seems to have chosen to remain close the conceptual meaning of the original text. It has its own value, though one has to sacrifice much of the artistic resonance that enlivens it. He has usefully and appropriately annotated his translation, especially where exact linguistic equivalents for certain terms cannot be found. His notes amply reflect his scholarship and remarkable industry. This work makes its debut in the auspicious year of the quadri-centenary of the inception of the Holy Granth. Happily, it has been brought out for distribution at the World Parliament of Religions being held in Barcelona in July 2004. That is why it has a companion translation in the Spanish language also.

I find that this translation makes a valuable addition to the already existing translations of selections from the Holy Granth. I give it a warm welcome.

A Revealed Word can unveil its meaning only to those who have themselves approached the gates of the beautiful palace of intuition. Others, like ourselves, knock begging for the doors to be opened, but wait in vain. May we be granted the patience to wait for that revelation the ultimate pinnacle of which is liberation itself.

Guru Granth Sahib (GGS from here onwards) (lit., the Honoured Book that is the Guru) is a holy text that serves as a gate to revelation and liberation, like the gate to God described in the So Dario 'That Gate' section of the Granth (see song 2). We can skim its surfaces but diving deep is only for the fortunate few.

These few pages of Introduction can serve only those who have no previous familiarity with this Treasure2. From the 12th to the 18th centuries in India there arose a galaxy of saints and devotees who, all, composed their inspirations in the form of songs and often, like St. Hildegard of Bingen (12th century, Germany), set music to their divine poetry. The GGS is a collection of these divine revelations. The manuscript enshrined in 1707 at Nanded comprises 1403 pages containing a number of Cantos or Books as well as approximately 6000 Sabads (Holy Words) or Baanees (Holy Utterances), as these songs or psalms are called. It is not only the holy book of the Sikhs (lit., Disciples), population 25 million, but is highly revered by a large segment of the people of Sindh and Punjab states who are not 'officially' recognised as Sikhs but who, nevertheless, enshrine the holy book in their homes and temples.

These Words in Song were first collected by the fifth of the ten Gurus of the Sikh tradition. Guru Arjunadeva mounted a massive effort to collect these from far and wide and included the words of five Sikh Gurus (including himself), four very close disciple-musicians in the tradition, 15 saints of all traditions, and 11 bards who were also saintly beings. The tenth Sikh Guru included the words of the ninth Guru, but not his own words, and enshrined this finalised text in 1707. It is a masterpiece of collecting, compiling, collating and editing. In its literary genre it is unique in that the Cantos and the Psalms are compiled in the sequences of 22 ragas, the Indian classification of melodies, in which they are to be sung. The Sikhs are, then, not only followers of the ten Gurus who were the founders of the Sikh tradition, but keepers of this incredibly rich musical heritage. The text is not read; it is only sung. In the central Guru-dwara (lit., Guru's Gate), known as Har-mandar Sahib (lit., Holy Temple of God) in Amritsar, the singing has not ceased for the last four centuries.

The first of the ten Gurus of the Sikh tradition, Guru Nanak, was an extraordinary Presence. The miracles attributed to him in the Saakhis, the biographical works, are uncountable. His closest disciples and companions were Baalaa and Mardaanaa; one a. Hindu, the other a Muslim, the latter ten years his senior in age. Mardaanaa carried a rabab, string instrument. Often Guru Nanak would command Mardaanaa: Play the rabab, the Word is descending. Whatever then the Guru sang, the disciple played along on the musical instrument.

The other point that makes the GGS unique is that it includes the teachings of 36 saintly beings of different faiths and religious traditions. The great devotee of Krishna, the poet Jayadeva, is read here alongside the Muslim Sufi Farid. The clerics of established religions as well as the bands of false Jogis are taken to task for forgetting the purity of a personal spiritual experience. The Guru in this text has no use for the theologue and the enforcer of a law. It challenges the pretension of the false yogi who has put on all kinds of display on himself (see song 71) and exhibits miraculous powers (songs 6, 14), and it defines the true Yoga (song 83). For the Muslim, it explains the true Islam (see song 87) and advises the Hindu to abandon his caste hierarchies and ritual hypocrisies (songs 17, 40). It sings of Allah that is Raam (song 100) in one breath and takes us to the spirituality beyond religion (songs 77, 81). All this, nine to four centuries (12th to 17th) before our contemporary era of 'inter-faith dialogues', yes, long before the word 'secular' came into usage. If there can be an Interfaith Holy Book, it is this.

Parallel to what happened in European literature from the 12", century onwards, the saint-poets included in this Work left behind the language and formats of the classical Sanskrit texts. They sang in the language of the people. The mendicants wandering the subcontinent of India brought together the vast spectrum of cultures, spoken languages and a thousand dialects. As these monks of varied traditions met on pilgrim routes and discoursed in divinity, they created a fluid language, a language without too many fixed forms.

This language of the sadhusL sadhukkadi, is the language of the GGS, later written in the Gurumukhi script. At the same time it retains the conciseness of the Revealed Word. In order to translate it, one needs to have a familiarity with the background of the thousand dialects which the sadhukkadi gathered in itself. One needs to meditate deep into the layers of the revelation. We sometimes end up using perhaps 15 words to translate three words and are yet unable to convey their full meaning. Here, when a word conveys more than one meaning we have given both meanings together. We have added some words in brackets [ ] where they do not occur in the text but the meaning would be obscure without them. 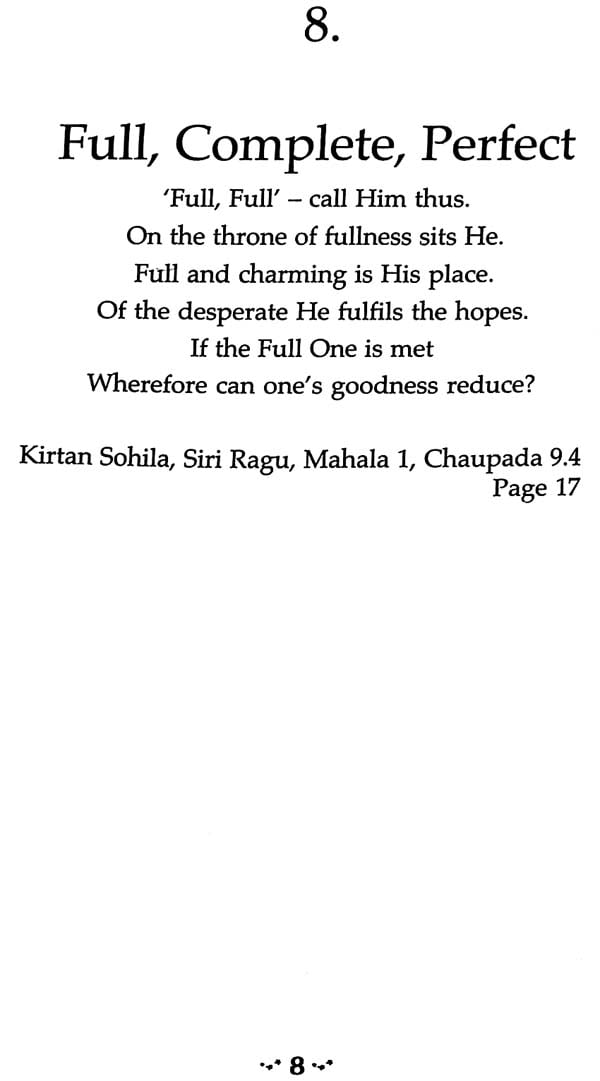 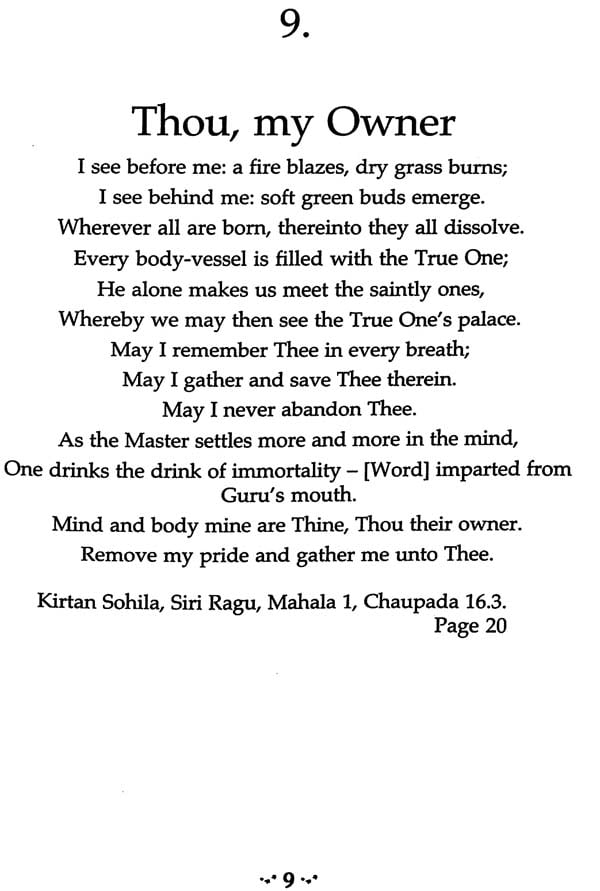 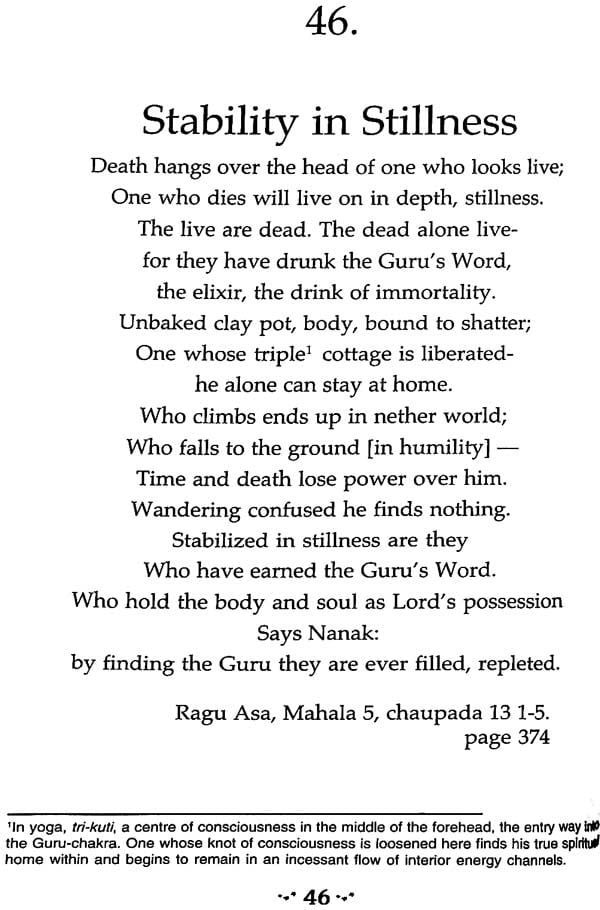 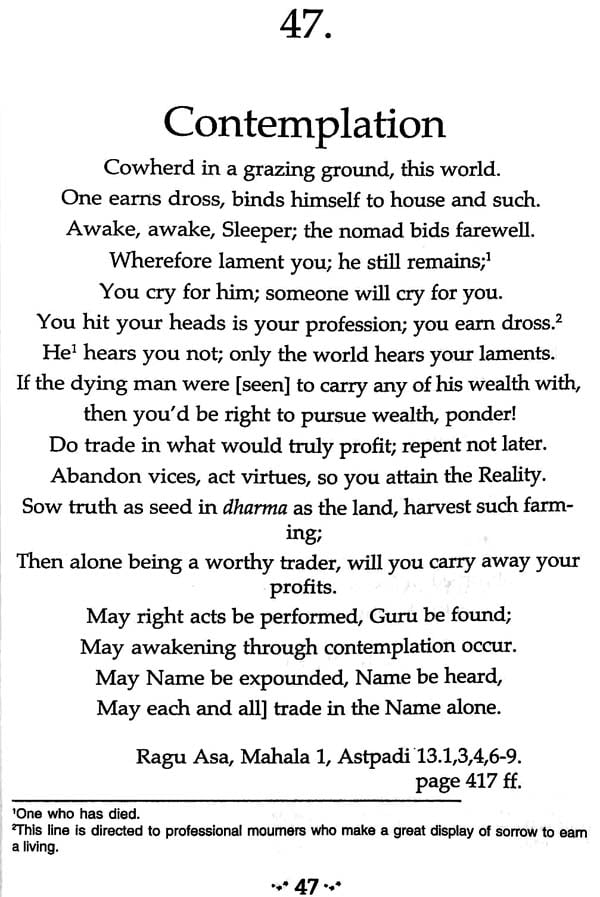 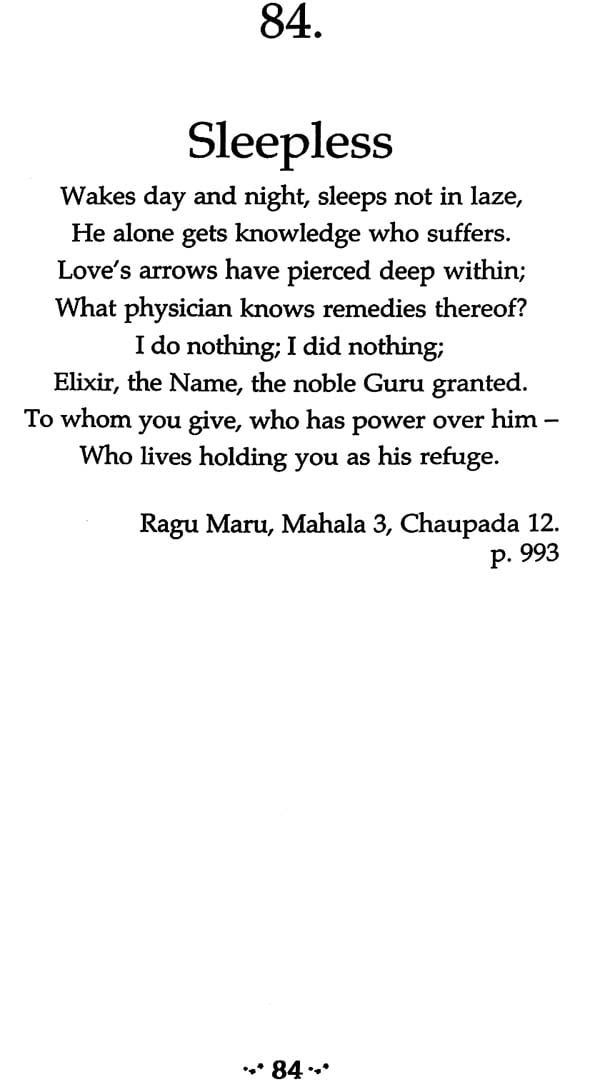 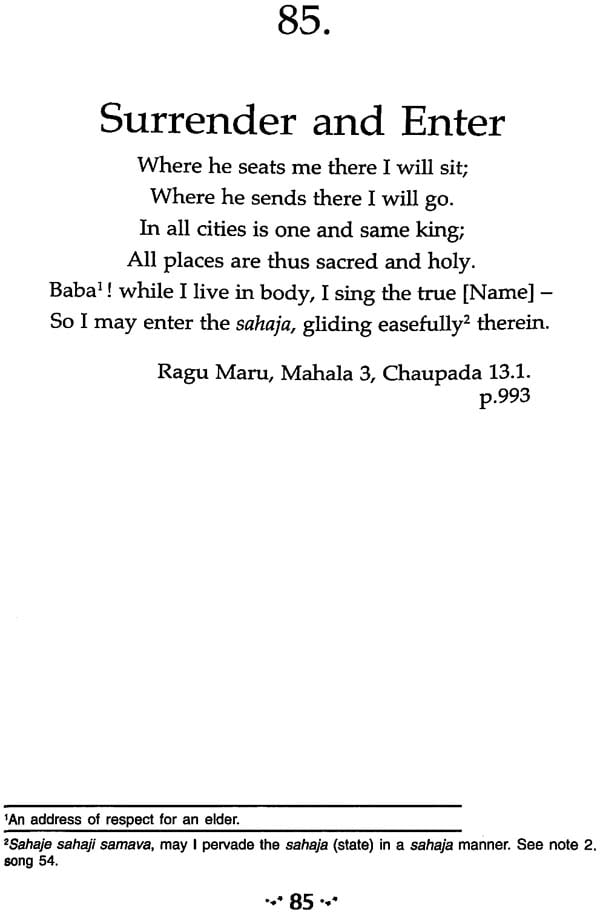 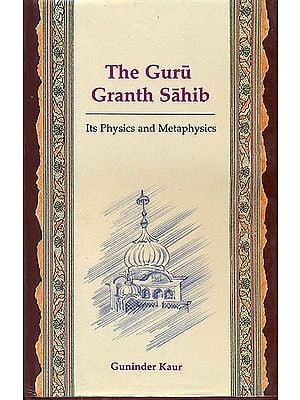 The Guru Granth Sahib (Its Physics and Metaphysics)
By Guninder Kaur
$21.00 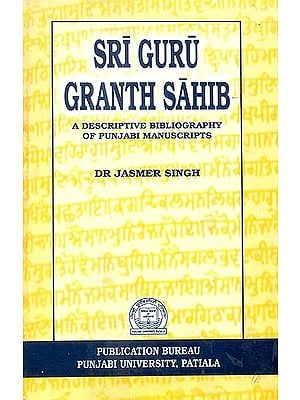 Guru Granth Sahib Among the Scriptures of the World
By Darshan Singh
$16.00 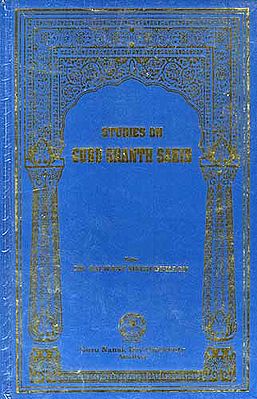 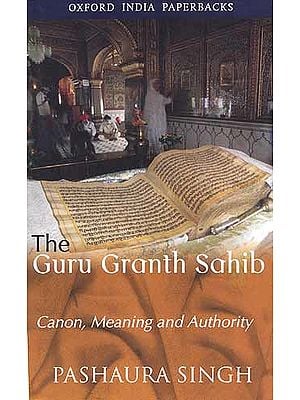 The Dasam Granth: The Second Scripture of the Sikhs written by Sri Guru Gobind Singh
By Translated into English By: Surindar Singh Kohli
$69.30 $77.00  [ 10% off ]

Songs of Kabir From the Adi Granth
By Nirmal Dass
$31.00

Sikh Gurus and The Indian Spiritual Thought
By Taran Sinon
$16.00