Sridhama Pandharapur is one of the prominent holy places of India. Puranas, saints and sages sing its glories. This place is the transcendental abode of Lord Visnu on earth. The Lord of Dvaraka Himself resides here. Such a glorious place is this Pandharapur dhctma which has always been dear to Vaisnavas. Since the time when ISKCON commenced its preaching work in this spiritual capital of Maharastra, Pandharapur dhama has been visited by many thousands of followers of ISKCON, Vaisnavas from various countries who speak different languages. They rejoice in residing here and taking darana of Sri Pancluranga. They all have many curiosities and thus they ask many questions about this holy place. With an intention of fulfilling this need of devotees and to thus help them realize Sridhama Pandharapur, Sri Srimad Lokanath Swami Maharaja desired to have such a book published.

Although the glories of Sridhama Pandharapur is available in many Purarias and historical literature, such information is either very brief or scattered, and many sources do not have authentic references. There was a genuine need for such an authentic literature which will introduce the world about the glories, festivals, ways of worship, traditions that are being followed in Pandharapur.

Our Hare Krsna movement is an extension of Brahma-Madhva-Gaudiya disciplic succession. It has its followers all over the world. Many great Vaisnavas are said to have visited Pandharapur as mentioned in Caitanya Bhagavata and Caitanya-caritamrta etc. Sripad Madhvacarya, Ramanujacarya, Nimbarkacarya, Vallabhacarya, Laksmipati Tirtha, Nityananda Prabhu, Sriranga Puri, ViSvarapa and Lord Caitanya also visited this place. Nityananda Prabhu is said to have received His spiritual initiation in Pandharapur. ViSvariipa, the elder brother of Sri Caitanya Mahaprabhu left home at an early age. He travelled to many holy places in India and received his sannyasa (the renounced order of life) in Sridhama Pandharapur. As a renunciant He was known as Safikararanya. After a few years Sri Caitanya also renounced the world and left home. Sri Caitanya commenced His South Indian pilgrimage from Jagannatha Puri. On His way back to Puri, Sri Caitanya visited Pandharapur, where He met a Madhya sannyasi Sriranga Puri. Sriranga Puri informed Sri Caitanya about Vgvanapa's renunciation and disappearance. Thus our Brahma-Madhva-Gaudlya Sampradaya is cordially connected to this holy place Sridhama Pandharapur. Considering all these things there was a need to have a book which can inform the glories of Pandharapur to the modern world.

With such a thought Sri Srimad Lokanath Swami began compiling this book. Authentic scriptures were consulted, scholars were approached, a rare copy of Shanda Pura na was obtained and relevant verses were translated. The interviews of scholars were taken and the information was neatly arranged.

He had a desire to publish this book on the occasion of the four-hundredth birth anniversary of Saint Tukarama. Editing, typing, proof-reading, page setup and many other necessary things were yet to be accomplished and it needed some experienced men and enough time as well. I met Maharaja and put forth my difficulties. I expressed my inability to complete this work in due time and told him that it needed some more time. Maharaja said, "We have enough data now. In future we can publish an edited version, but whatever we have at present can be published as an offering to Saint Tukarama on his birth anniversary." I had no word to reply. I had no choice but to accept this challenge.

Whatever information about Sridhama Pandharapur is given in this book is verily authentic. Inquisitive devotees shall benefit from this book. The lives of Vaisnava saints who visited Pandharapur in past ages In translating this book from Marathi to English, it is hoped that there would be a wider reach, and accessibility of readership globally.

My aim in writing this book was to introduce the glories of Panduranga and Pandharapur to the whole world. The ISKCON Pandharapur temple project was launched in the 1980's with the same understanding. This project was designed as a forum to broadcast the glories of Viththala far and wide. I often initiate a discussion about Lord Viththala in Pandharapur and His devotees, especially Saint Tukarama. Pandharapur has become increasingly popular as a city of pilgrimage by Hare Krsna devotees from India and abroad.

In 2009 I published a book, Bhavaihuntha Pandharapur in Marathi. That book explored the glories of Pandharapur as Vaikuntha on Earth. It is already in its seventh print, at 5000 copies per print. Constant demands were made over the years, for an English version. Given the immense pressure for primordial information on Pandharapur, we embarked on a translation of the Marathi text.

The layout of the book is slightly different from the original Marathi version. The changes were made specifically with the worldwide readers in mind. The original text is replete with lengthy Marathi verses, which were sure to bewilder even the most intrepid Western reader. These verses, together with translations are now indexed at the back of the book.

I humbly offer Bhavaikuritha Pandharapur : Vaihuntha on Earth to a more universal audience who, I am sure, will be enamoured by the glories of this consecrated city and completely enraptured by Lord Viththala's splendour.

Glories to the Pandharapur city which is non-different from the transcendental abode Vaihuntha which has appeared on the earth.

For several years I had nurtured a significant measure of excitement in my mind and heart about Panclharapur in the state of Maharastra. Born in one of the villages in Maharastra, I grew up with and was touched by the flawless, continuous poetry (abhangas) written and sung with great exuberance by different poets and sages like Jrianevara, Ekanatha, Tukarama and Namadeva about this sacred city. Later, in September 1976, after being instructed by Srila Prabhupada to begin a bullock-cart traveling sanhirtana party, the 'village to village' preaching in Maharastra had gained considerable momentum.

I felt a compelling need to research and write about this profound idea made by Saint Bhanudasa Maharaja that Panclharapur city is "non-different from the transcendental abode of Vaihuntha." To know about the abode of the Lord (dhama) is as good as knowing the Supreme Personality of Godhead. This means more than just having information about dhama, but also trying to realize it. To have a realization about dhama, we had to dig deep into the literature and study authentic scriptures diligently. We always hear folklores and commentaries of mental speculators, but they may not always be correct, as their interpretations are not always based on scriptures which are free from defects, and should be represented accurately.

Further interviews were conducted with various scholars for verification of information used. The title for this book, Bhavaihuntha Pandharapar - Vaihuntha on Earth was thus inspired by irrefragable evidence, and the book finally emerged from a collective effort, gleaned from researching authentic literature, and in consultation with scholars. In a book as descriptive as Blifivaihuritha Pandharapur - Vaihuritha on Earth a certain measure of repetition is anticipated. Hence, there are moments in the book when some information has been repeated, but reworked to support another context. In an illustration of great sages in Chapter 11 All Sampradetya Acaryas visit Pandharapur and temples built in their honour, the risk of repetition is unavoidable, because ideas of personalities and temples are so intertwined. However, where possible, a certain degree of freshness is introduced where relevant.

The fourteen chapters in this book illustrate the glories of Pandharapur -the divine abode of Lord Sri Viththala, His seasonal worship, various holy places within palicethroi (within a circle of an eight kilometer radius), a description of the great personalities and their glories and temples. The purpose of this book is to re-establish and spread the glories of this holy place, Sridheima Pandharapur and its most venerated river, Candrabhaga. She captures the devotional ecstasy of great sages who danced on her bank. Essentially, this book responds to the central idea that Pandharapur is in fact, non-different from the transcendental abode of Vaikuntha.

In Chapter 5, Dindi pilgrims' holy dip in Candrabhaga which has been performed annually for the last seven hundred years is described. This epic journey of approximately 200-250 kilometers from various places to Pandharapur , just to have a glimpse of Lord Viththala, is explored in detail.

Closer to ISKCON, the chapters elaborate extensively on Sri Caitanya Mahaprabhu's and Sri Nityananda Prabhu's visit to Pandharapur, and initiation of the latter. This information is cited from Bengali literature, the Sri Caitanya-caritamrta. Because Pandharapur is considered as one of the major holy places of India, it is not just confined to Maharashtrian saints, but also visited by many Vaisnava Acaryas like Ramanujacarya, Nimbarkacarya and Vallabhacarya. Their visits are also narrated in this book.

Archival material relating to scriptural references and hymns about Gopalapura, have been recorded in this book. Gopalapura is considered non-different from Vrndavana, the abode of Gopala Krsna. The researched information exemplifies Lord Krsna's visit to Pandharapur in search of His beloved Rukmini. Lord Balarama who visited Pandharapur 5000 years ago, also came here in the form of Nityananda Prabhu. About 500 years ago, Lord Sri Caitanya visited .S.ridhama Pandharapur. The chapters elaborate on these Personalities of Godhead, Their pastimes, the holy sites visited and the significance of Their visits to this sanctified city.

From the time that ISKCON commenced its preaching work in the spiritual capital of Maharastra, Pandharapur dhama has been visited by many thousands of Vaisnavas from different multiracial and multilingual contexts. Chapter 13 notes the testimonies of these foreign devotees, who have visited Pandharapur dhama to take darSana of Sri Pancluranga.

In some respects, Bhavaikuntha Pandharapur - Vaikuritha on Earth resembles a handbook that also engages with information about several other personalities like JtianeSvara, Namadeva, Tukarama, Cokhamela, and Gord Kumbhara, amongst others, their teachings about spirituality within a particular time, place and circumstance. Given the sacredness of Pandharapur, the book also discusses the etiquettes, rules, and regulations, to be followed in a holy place. It further elaborates on how one should observe the Lord, and how one should reside in a holy place generally. 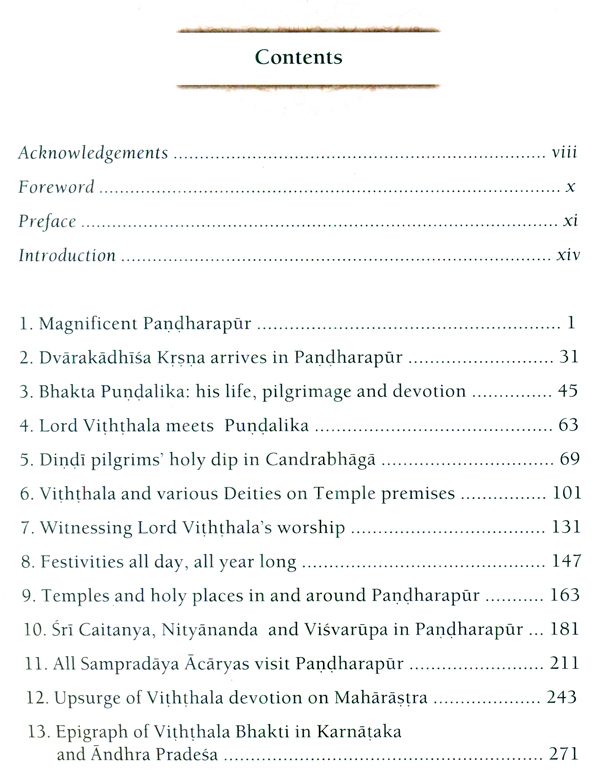 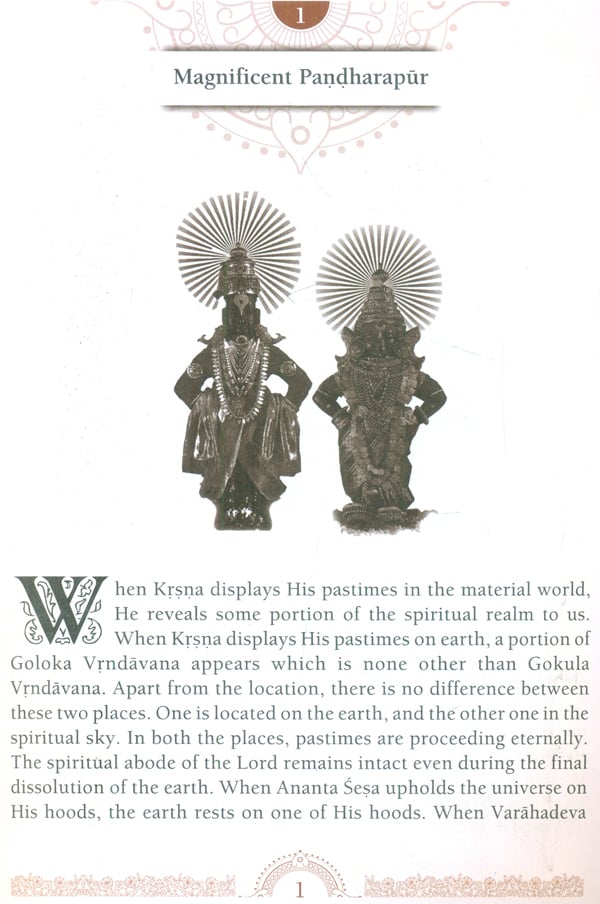 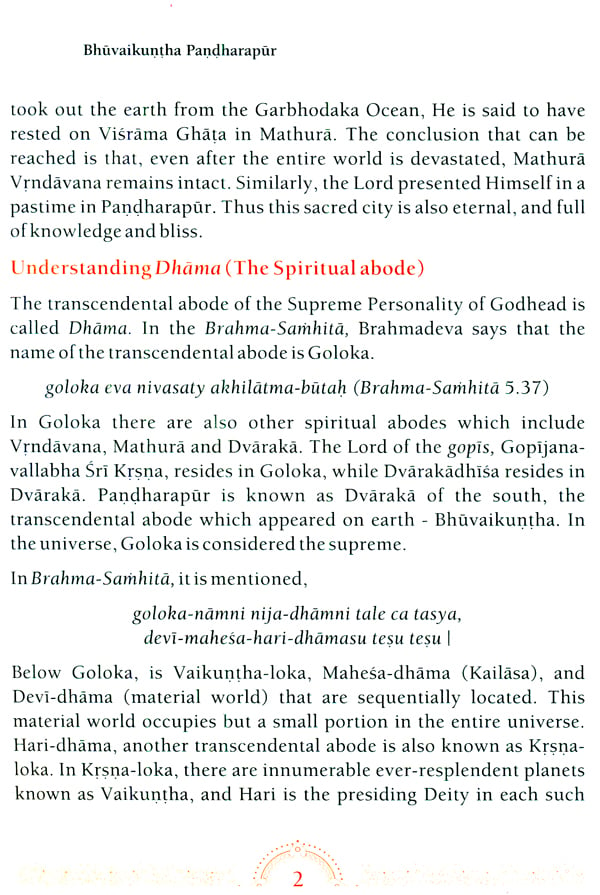 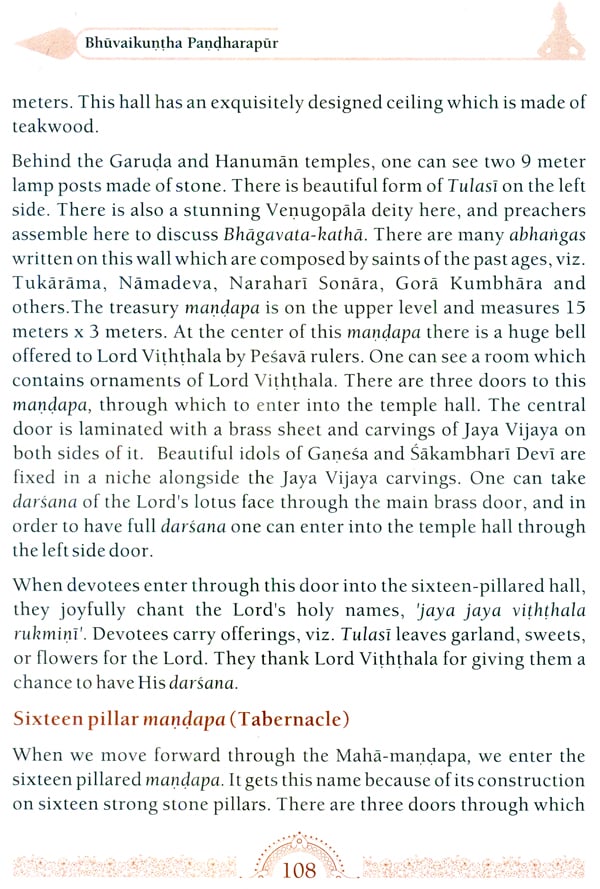 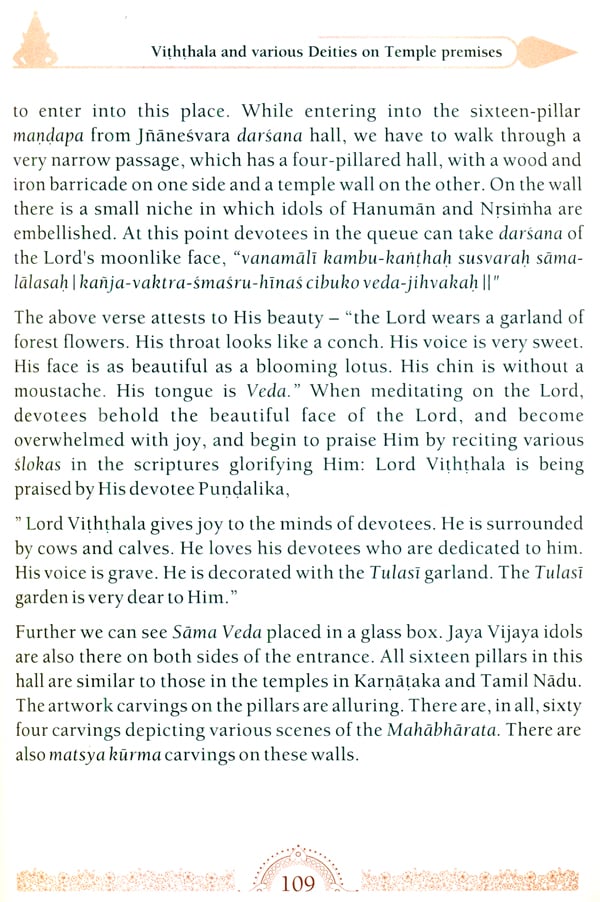 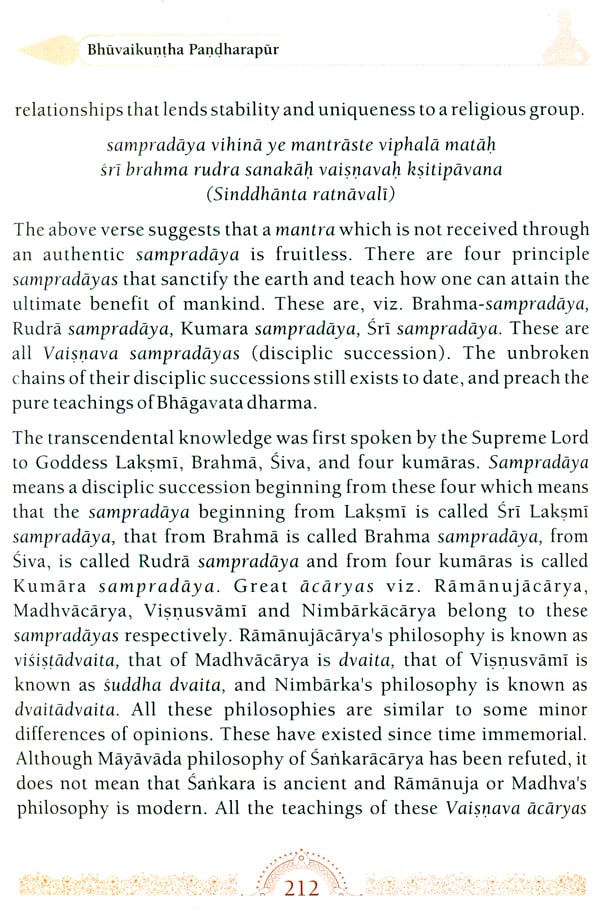 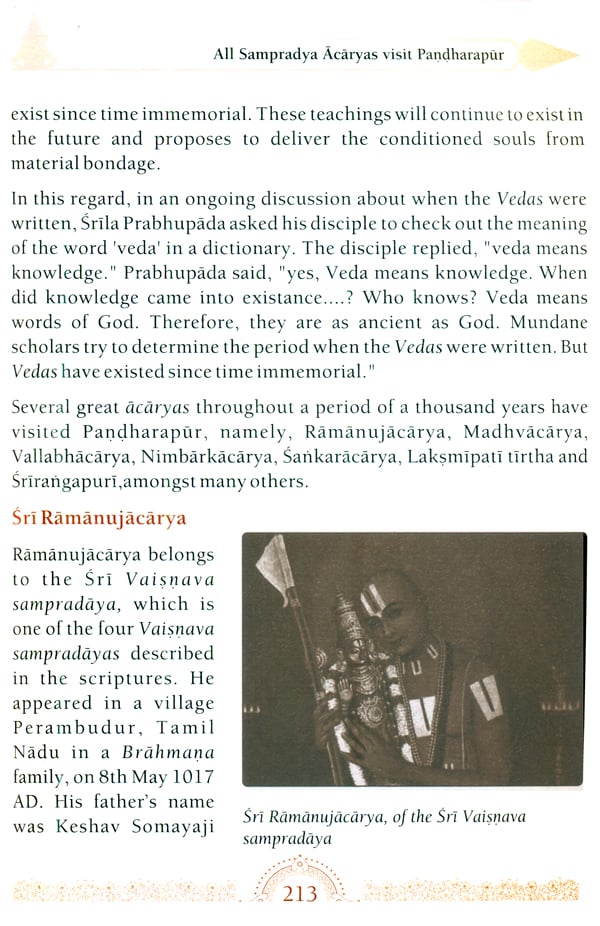 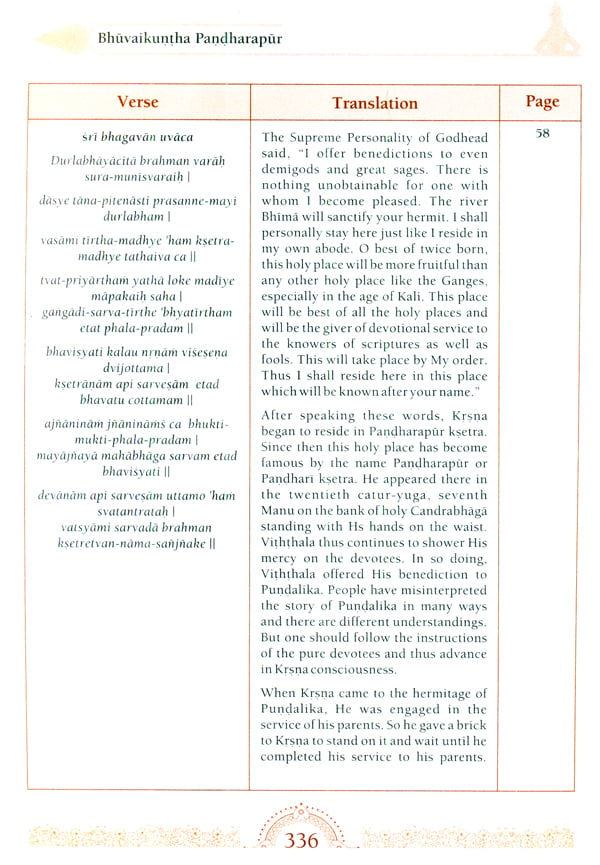 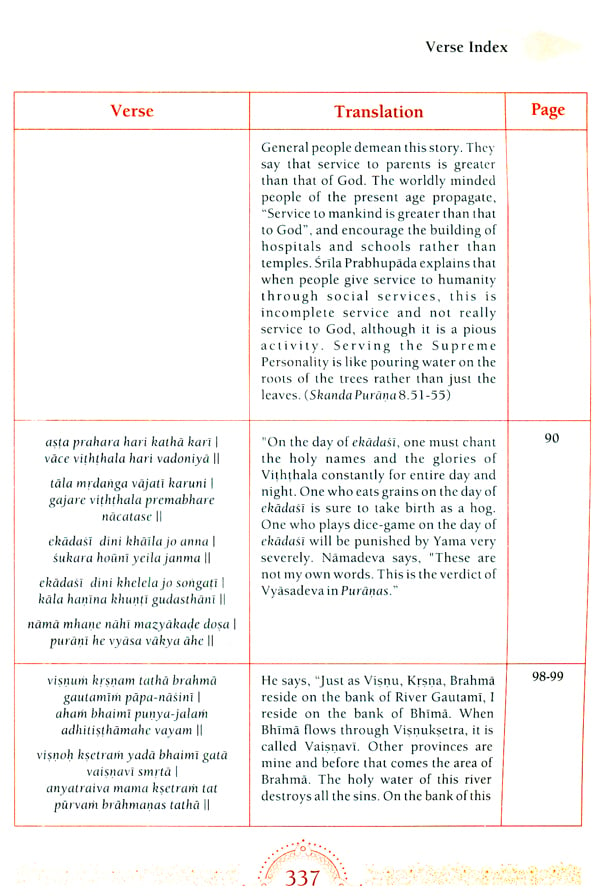 IN VAIKUNTHA NOT EVEN THE LEAVES FALL: A TREATISE ON THE BONDAGE OF THE JIVA (An Old and Rare Book )
By SATYA NARAYANAKUNDALI DASA
$38.50
FREE Delivery
Best Seller Srimad Bhagavata: The Holy Book of God - Volume Three (Skandha X)
By Translated By: Swami Tapasyananda
$31
Out of Stock