Hegel's India: a reinterptretation, with texts 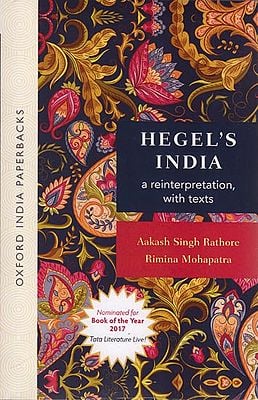 $21.00
Notify me when this item is available
Save to Wishlist Send as E-card Share by Email
Back of the Book
In his writings on India, Hegel characterized Indian thought as "fantastic./ "subjective," "wild./ "dreamy./ "frenzied./ "absurd': and "repetitive/ If Indian art, religion, and philosophy were so inadequate, what explains his life-long fascination with India? This unique volume brings together Hegel's reflections and argues that Indian thought haunted him, representing a nemesis to his own philosophy. Further, it indicates that the longstanding critical appraisals of Hegel are incommensurate with his detailed explorations of Indian thought.

Hegel distinguished his own thought on two grounds. The first was to focus on freedom and to rail perpetually against the caste system. The second was to indicate the necessity for dialectical mediation, and thus to reprove the stasis of Indian thought. But did Hegel ever manage to exorcise the evil twin that beset his work?

Shedding new light on Ideological and Hegelian studies, this book systematically presents all of Hegel's writings on and about India for the first time, including translations of his lesser-known essays on the Bhagavad-Gita and the Oriental Spirit, along with a substantive reinterpretation and a bibliography.

Preface
There is a scene in Wim Wenders's Alice in the Cities (1974). About an hour and a half into the film in a long-drive sequence, the camera cuts to a surreal 16-second shot of a boy riding a bicycle along a sidewalk. He is looking at someone, his eyes fixed in our direction. But we are not sure who it is. As he begins to pedal faster to keep up with the moving car, he never lets his gaze fall. At once, the instants convert into a site of recognition and exchange, as though we know. We are no longer strangers. A scatter of time that turns steady, disorienting and luminous. It is a place in between, an enclosure and clearing. The camera slowly tracks back.

Hegel's India was published in January 2017. Over a year after, we look back at the aberrations and signs. This book indicates that we seek distance to watch ourselves. As though we stand on two sides of a street. At that point, a forgotten intersection transfigures into a threshold that reflects light, noise, heat. If questions like the idea of India and who is secular beset us today, then perhaps by detaching we gain perspective. Racism is insufferable; what then of nationalism? This book breaks a line. Its reception is testament to a striving and desire. The pursuit of an understanding of identity through the eyes of someone who both inhabits and did not inhabit our world-separated by continent, culture, language, yet close. The sort of intimacy owed to a communion with knowledge and reciprocity, founded on an earnest engagement with texts and translations. It speaks of a faraway stranger, but no stranger to our thoughts. This search for dialogue reveals the way we talk. What we think. How we act. What we think others think. What we value and repel. What angers us, impresses us, brings unease and peace. This hunger ruptures stereotypes, defies ideological edicts. It unearths facets that may or not fit the puzzle.

These instances compel us to rethink our colonial and postcolonial arrogance to re-conceive knowledge and human spirit.

The book extends a field for conversations. What is it to be global? Who is cosmopolitan? Are we rooted? What of violence and empathy? These undercurrents are rife with divergences that we confront at every step-individual and society, freedom, anarchy and law, selfdetermination and globalization, constitutional democracy and mythology, religion and politics, marginalization and empowerment. It is inevitable then for the premises of the book to spotlight longstanding conflicts within tradition, entrapment, diversity, parochialism, pluralism, orientalism and self-understanding. By facing inwards, they review the intractable strands of heritage and legacy, indignity and evolution, indifference and intolerance, difference and universality, xenophobia and amalgamation, reason and emotion, norms and rights, justice and legitimacy, exploitation and abandonment. What remains same? What has changed? In Hegel's encounter with India, in a manner of reprise, we recall our own ignorance, cynicism, collaboration, allegiance, ethics, reform, subversion, struggle and evolution as also beliefs, habits, prejudice and curiosity. As any study is wont to do, the work fulcrums texts with interpretations and foreshadows these abiding contexts. The act in turn gleans inspiration and breaking away, dreams, dread, wonder, aspiration, labor, the wanderings of human nature, chance, adventure, the force, the flaws, the stumbling, and the impetus of relentless imagination and potential. In sum, an effort and opportunity to meet ourselves, and to finding others in finding us.

To catch sight of history and futures as a multitude of paths traverse time, overlay civilizations, when ideas morph and crises-cross far deeper connections than we realize, those that we forget, do not know about, do not trust-these instincts and considerations are integral to any radical unlearning, introspection, and discovery. To redrawing boundaries of the world, and those of our minds, the stage sets a (re)turn to philosophy.

Imagine that you are in a car in the front seat looking into the rear-view mirror. The mirror exposes an image of both you and another person in the back. That other person observes you as he gauges his own reflection. This book casts Hegel and India in similar grounds that we urge you to explore.

Did Hegel lose India in the translations that he latched on to? Rather perhaps we ask, what did he find?