The Himalaya - A Cultural Pilgrimage

Considered a classic of Gujarati Literature, Himalayan° Prawas is more than a mere chronicle of a Himalayan pilgrimage. The author has used it as a vehicle to roam the vast landscape of Indian history and culture. The physical journey described here happened in a two-month stretch in 1912. This chronicle was published in a series of articles starting in 1919 and continuing for several years. Published in the book form, it has seen six editions and continues to sell even today. It has been used as a textbook in many University curricula for students of Gujarati.

Dattatreya Balkrishna `Kaka' Kalelkar (1885-1981) was a Gandhian nationalist, a scholar, a social reformer and an educationalist. Born a Marathi, he soared to such heights as a writer in Gujarati that Gujarat took pride in calling him 'Savai Gujarati' — a better Gujarati than the native Gujaratis. He was among the founder members of the Gujarat Vidyapith and later became its vice chancellor. Sahitya Akademi honored Kakasaheb's extraordinary literary achievements by making him a Fellow in 1971.

Ashok Meghani, an engineer by profession, took early retirement and has been devoting his leisure time to literary activity. He has translated three other Gujarati books into English with The Himalaya : A Cultural Pilgrimage being his first foray into the non-fiction world.

This work is an English translation of the original travelogue Himalayan° Prawas by Kakasaheb Kalelkar, considered a classic of Gujarati literature.

I had several reservations in undertaking this translation project. The principal cause of concern was a comment I had heard, "Kakasaheb's ornamental prose is impossible to translate." Although in similar awe of the author's colossal stature, I took this as a challenge and decided not to back down from it. A careful reading of the original raised some other questions in my mind but they were not sufficient reason for me not to proceed.

The original work consisted of about 195 printed pages. 1 figured I would need about six months to finish the project. It didn't take me long to realise how badly I had underestimated the complexity of this job. The word-ornaments took their expected toll, of course; but, what turned out to be really difficult came from the book's hidden content. The work is replete with historical, scriptural and literary references. Researching and understanding those references was crucial to preserving the author's intent. Numerous Sanskrit and Marathi citations required help from others to understand and translate them. The travel information in the book being sketchy at best (for a travelogue), I spent quite some time in figuring out the trekking route and putting a map together to show it. All in all, it took me fourfold the time and effort compared to my initial estimate. I must also mention that information available online, specifically on the Wikipedia website, has been of immense value in all my research.

In spelling of all except the most commonly used names, I have used an `a' to indicate the `ah' sound e.g. Himalaya, Ganga, Vivekananda.

As much as possible, I have tried to use the current and official spellings of place names e.g. Haridwar (not Hardwar), Belur Math (not Belud Math), Mumbai (not Bombay).

I have incorporated some text from Swami Anand's writings on the same journey, principally to supplement the author's narrative with what had lapsed from his memory.

Against the expressed wishes of the author, I have included some excerpts from his article `Yamunarani' in the chapter `Jamanotri.'

I have added the text `[Hindu]' in certain statements to clarify them as specific to Hindu thought and beliefs.

In a couple of instances, my translations of quoted Sanskrit verses are not literal. This is deliberate because I have tried to interpret the author's intent and put it in my words. Scholars would certainly scoff at my interpretation of Kalidasa's famous déja vu verse in chapter 30.

I had inserted many footnotes to explain textual references, mainly intended for readers not familiar with India, its history and its culture. Realising that most of the book's readers would be familiar with the information, I later decided to move most of them into a chapter-wise glossary at the end of the book.

Gujarati Literary Academy of North America initiated this translation of Himalayano Prawas under its program to make literary masterpieces from Gujarati available in English. I thank its officers and members for entrusting this extremely demanding job to me.

I had to seek help in translating the Sanskrit and Marathi references in this book. I am thankful to Dr Vinod Joshi and Ashok Vidwans for their help. Early on in the project, I also sought advice from Dr Natwar Gandhi about my approach to this project. I thank him for taking time out of his extremely busy schedule and reviewing my work on the first few chapters of this translation.

I am grateful to Rohit Kothari and his staff at Sharda Mudranalaya, Ahmedabad, for their help in preparing the two maps in this book, and to David Serota for adding directional information to them.

I have been blessed with the affection of two stalwarts of Gujarati literature — Dr Sitanshu Yasashchandra and Dr Bholabhai Patel. But for Dr Patel's arm twisting, I would not have started on this project; and would still be floundering about halfway through if Dr Yasashchandra had not prodded me on. Both have shown their deep interest in this translation, have minutely read through much of it and provided extremely valuable guidance, suggestions and encouragement. I express my heartfelt gratitude to them for their kindness.

I have also been blessed with a family that has supported me through two years of this work. My wife Asha has endured through my phases of intense work, as also tried to nudge me out of my days of lazy brooding. My children Bela and Sagar, two extremely good writers themselves, have read through the entire text and provided invaluable comments, corrections, and their generation's perspective to me. I owe my gratitude to all three of them.

I must say I had some misgivings about the project after my initial reading of the original. Although the book is mostly about the author's travels in the Himalaya, I thought it came up short in its details about places, and the travel itself, to be called a 'travelogue in the geographical sense. I eventually realised that the book is about travel over a vast cultural landscape spanning time, space, and the Indian psyche. I stand humbled and corrected in this regard. It is necessary to add a word about this translation. Acutely aware of the enormous task I was entrusted with, I have tried to give my all to this project. If the result falls short, it will only be because my 'all' was not sufficient for a task of this complexity. I will be immensely grateful for any feedback from the readers.

I would like to close with this. Not being very religious, going on a 'Char Dham' pilgrimage has not appealed to me. Kakasaheb and Swami Anand's narratives have, however, created this intense desire in me to experience the final walks to the Jamanotri and Gangotri shrines. Perhaps, with some cooperation from my aging knees, I may yet get my wish.

This translation is affectionately dedicated to Shri Bholabhai Patel who made such an effort to make this project happen, and is now not around to see it come to fruition. I will sorely miss him. 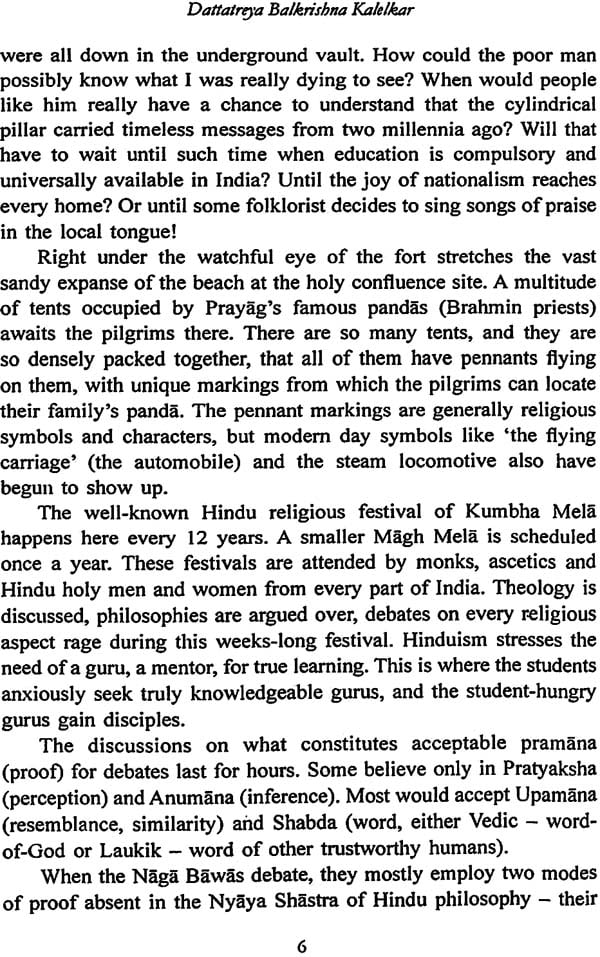 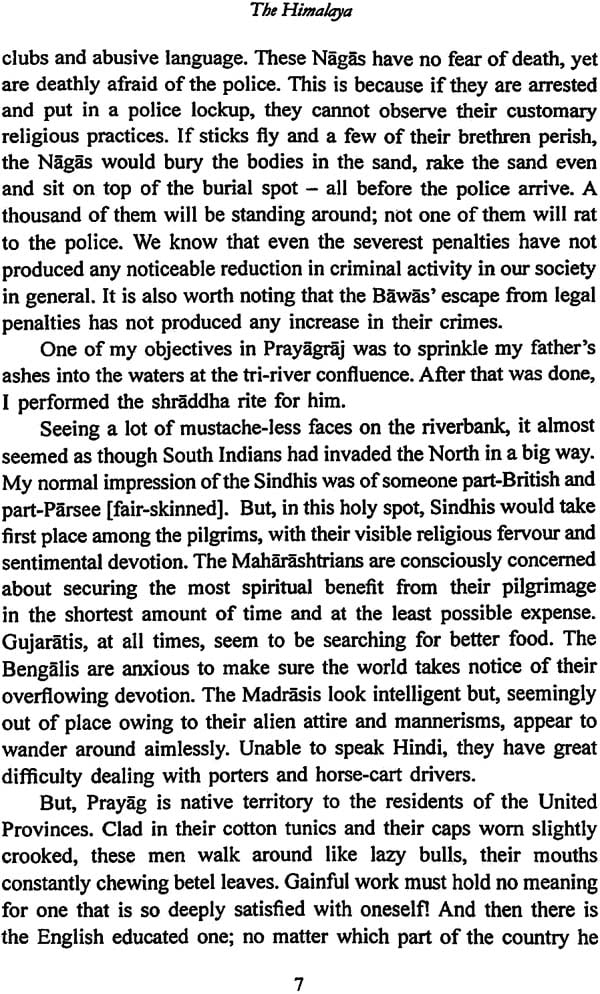 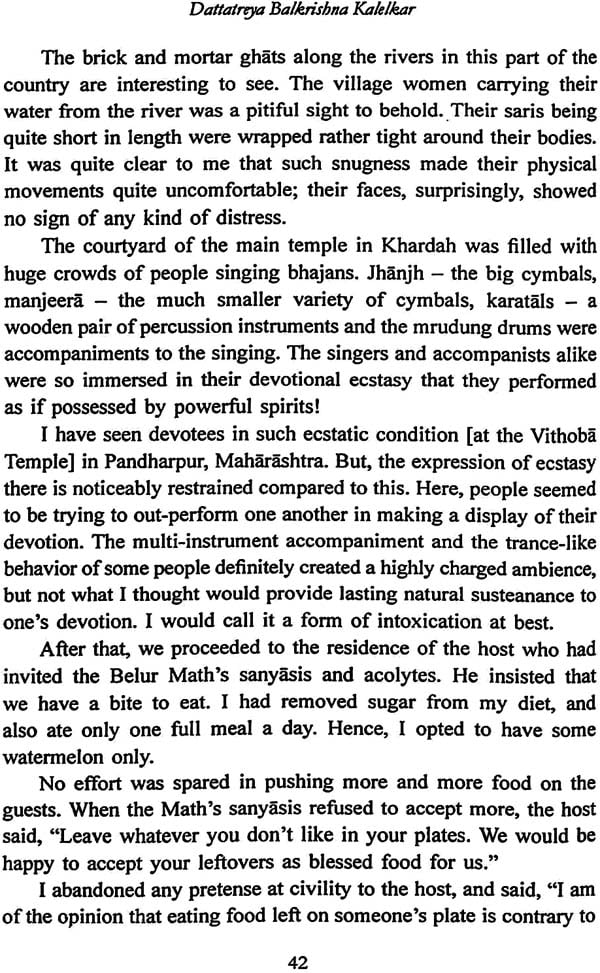 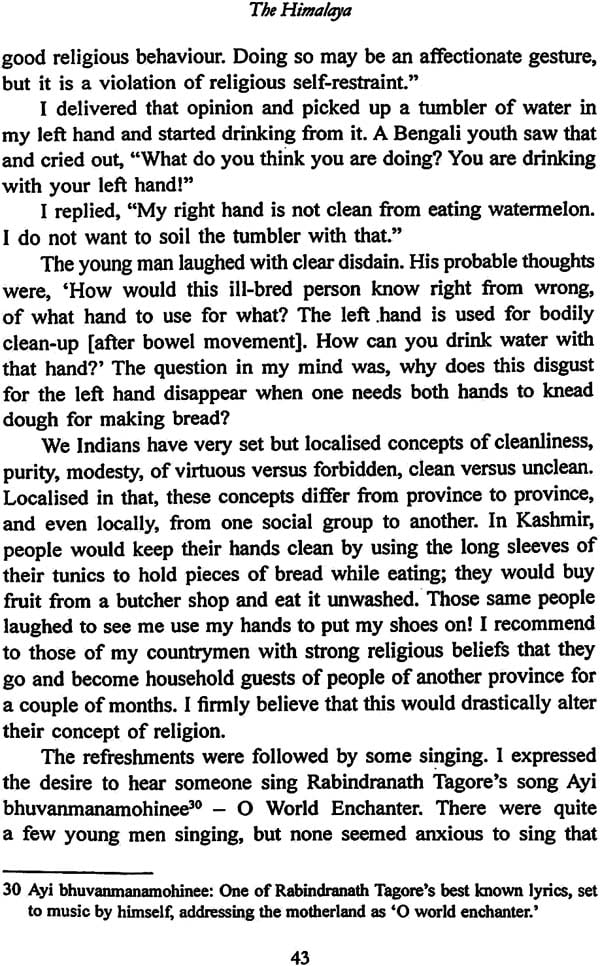 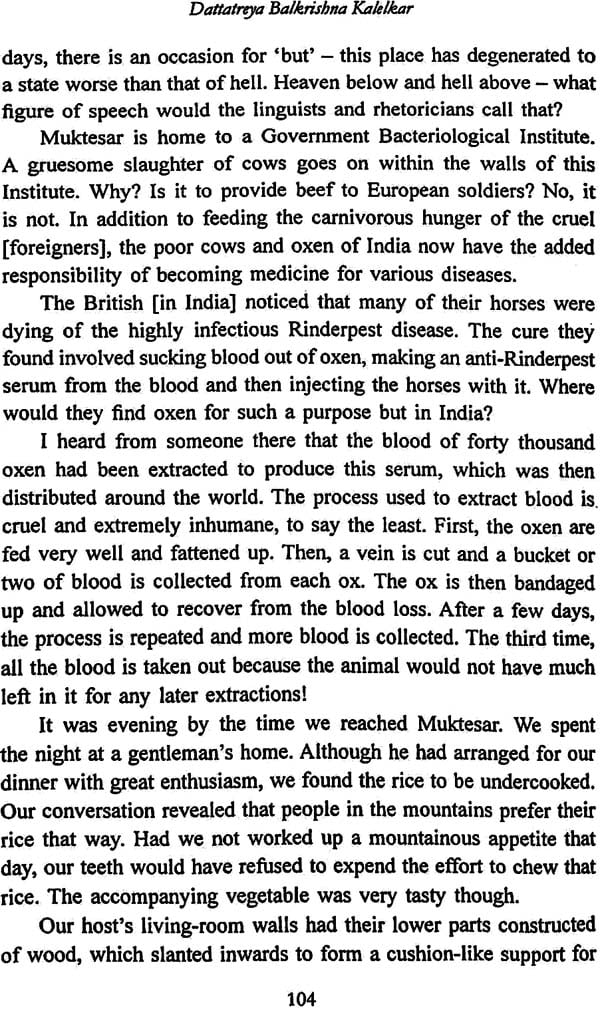 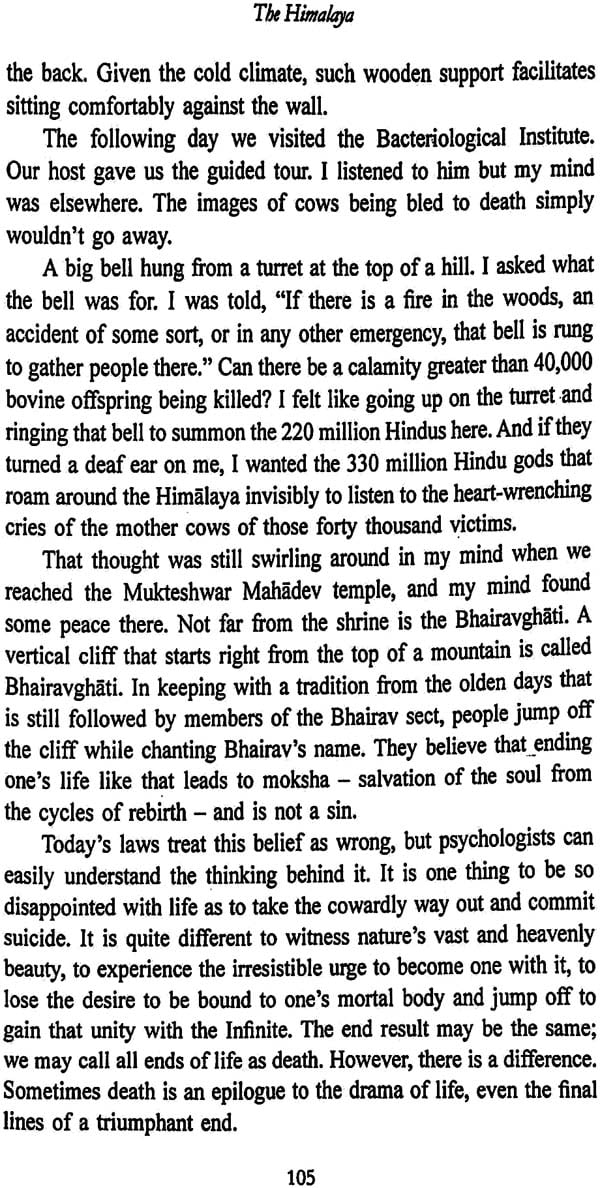 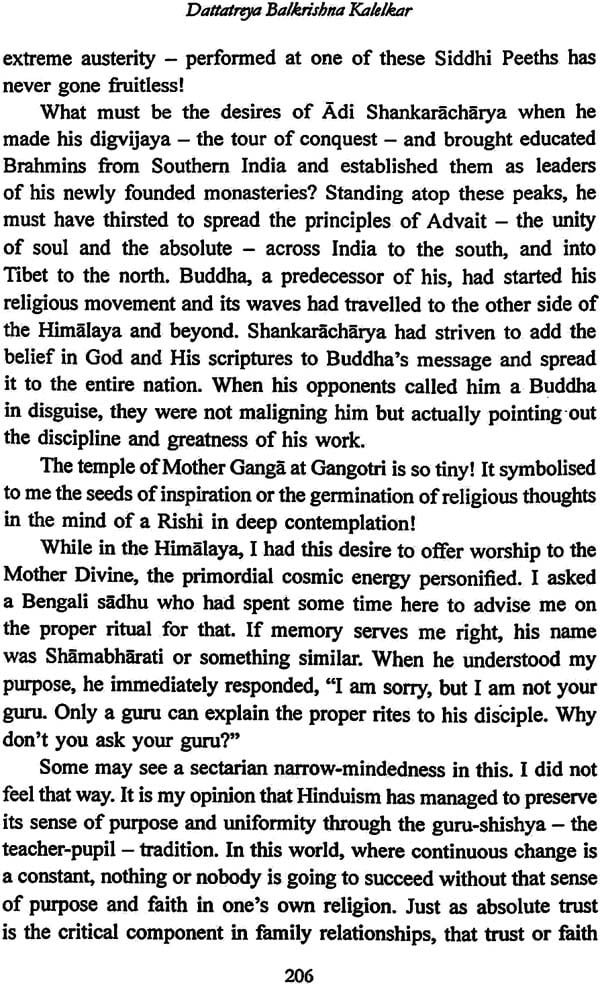 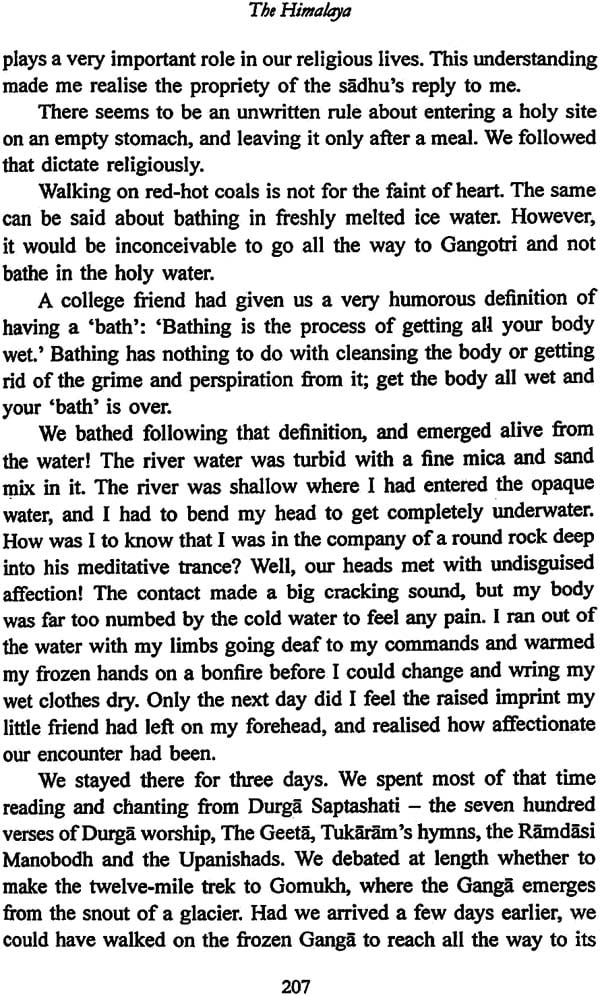 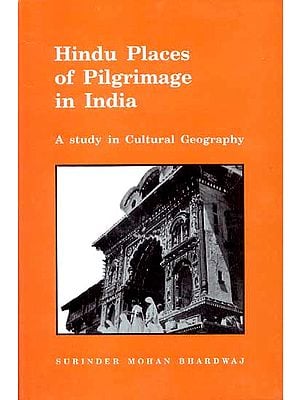 A Pilgrimage to Kanyakumari and Rameshwaram (A Journey Through Two of India's Most Sacred Centres of Pilgrimage)
By Swami Atmashraddhananda
$9.60
$12  (20% off)

Theerthayathra (A Pilgrimage Through Various Temples)
By K. Srikumaran
$39
Out of Stock

TOWARDS THE PILGRIMAGE ARCHETYPE (The Pancakrosi Yatra of Banaras)
By Rana P. B. Singh
$30
FREE Delivery 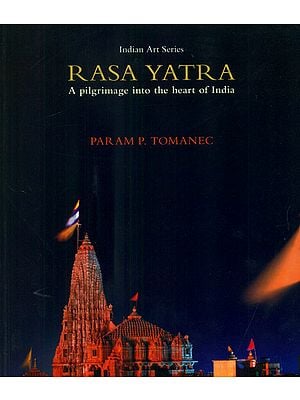 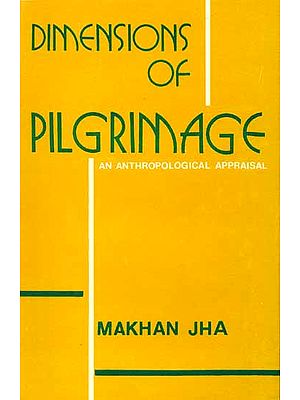