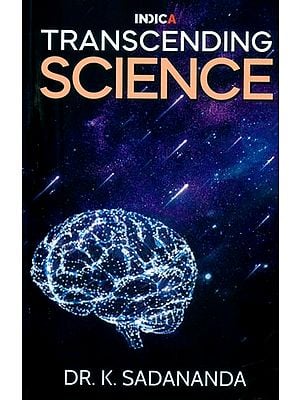 FREE Delivery
$35
Quantity
Usually ships in 10 days
Notify me when this item is available
About the Book
All objective sciences deal with the objectifiable entities and ignore in the process the very subject, who is doing the analysis. This book deals with the limitations of the objective sciences and also discusses how to prepare the mind so that it can see the truth. Transcending Science, therefore, involves how to transcend the subject-object duality, using the Yoga-Sastra discussed in the Gita and the Upanishads, and how to abide in the knowledge by overcoming all the mental obstacles that arise in the process. This forms the very purpose of life itself.
About the Author
Dr. K. Sadananda is a Material Scientist by profession, and has worked at the United States Naval Research Laboratory as Head of Deformation and Fracture, published extensively in Science, and received many awards.

He retired in 2005 and now works as a private consultant in the United States for six months of the year. He was also a visiting professor at the Indian Institute of Technology, Madras. He is a disciple of Swami Chinmayanandaji, was a founding trustee of the Chinmaya Mission's Washington Regional Center as well as Shree Siva Vishnu Temple, Maryland, USA.

He served as Secretary and Treasurer of SEVA, Inc., a philanthropic organization formed around 1980 by Chinmaya Mission, to fund projects in India and elsewhere. Currently, he is an Acharya or spiritual teacher of Chinmaya Mission and splits his time between the USA and India. Advaita Academy has been sponsoring many of his talks on Vedanta and has made them available on 'YouTube under Acharya Sadaji. He is also the author of the books, Introduction to Vedanta, three volumes of Journey Beyond: A Non-Dual Approach, available on Amazon, USA, UK and India. He is married to Mrinalini Sadananda, who is a well-known Kuchipudi dancer and choreographer.

Foreword
The quest for knowledge is natural to a human being because of the special gift of the discriminating faculty known as intellect. Vedanta says the highest knowledge is that which liberates us from bondage forever and bestows everlasting happiness. This self knowledge is sought by seekers all over the world, through various means such as online study groups, webinars and so on.

Dr. K. Sadananda of Chinmaya Mission has been having Vedantic discussions for more than a decade and has published three books earlier. The present publication 'Transcending Science' covers a vast number of topics which are important in the study of Vedanta. Also, it can provide greater clarity in these topics for a seeker wanting to . walk the path of inner transformation.

The hard work, consistency and systematic presentation of the subject by Dr. K. Sadananda is worthy of appreciation. May his work spread far and wide and benefit the seekers.

Preface
This book represents the evolution of my mind from a rational scientist to a Vedanta. From childhood, I grew up with a questioning mind, with the encouragement from my parents and later from my teachers. When I was a child, I was fascinated by the stories from Mahabharata and Ramayana and used to attend the Hari Kathas with my grandmother, Some-how, this pursuit for the truth seems to be deep-rooted in my mind. Although I was brought up with staunch Vishishtadvaita-tradition, my mind started questioning the basic postulates of that philosophy. It was at that time, I got exposed to the Jiddu Krishnamurthy's books when I was studying for PUC (12th Grade). The JK's arguments of how our minds are conditioned by the traditions, culture, upbringing, and environment appealed to' my logic. He suggested that one should observe the mind to recondition it. It sounded logical but seemed not practical. Whenever I started to observe the mind, I had problems. First, I did not know who is the observer of the conditioned mind. Later I discovered that it is the mind only that has to observe the mind. In addition, every time I tried to observe the mind, I got lost traveling with the mind all over the world. After many attempts, I gave up this pursuit and started devoting to my time to science.

However, my questioning mind became more active. I used to ask many questions during science classes for clarification. Many teachers made me think deeper than just answer my questions. A professor, who taught me during my Ph.D. and met me fifteen years later in a conference, said he remembers me very well. He said that he was thankful to me since he had to prepare a lot to be able to answer all possible questions that I might ask. He felt it was a real challenge for him, and as a result, he said, he learned a lot.

My desire to learn the truth got intensified until I attended Swami Chinmayanandaji's discourses at the American University in 1998. I had to attend because of my wife's insistence. However, his very first lecture on the logic of spirituality and Karma Yoga captured my mind.

I personally met Swamiji a couple of months later, who encouraged my questioning, advised me to take the postal Vedanta course from Chinmaya Mission, and also start a study group in Washington, D.C: He also formed Seva, In a philanthropic organization under the umbrella of Chinmaya Mission and made me the secretory-treasurer. During the course of time, he answered many of my persistent questions, and before answering used to ask me to think deeper.

Introduction
Vedanta is the Hindu path of knowledge, in which eternal happiness is found through realization of our true divine nature. Advaita is the highest form of Vedanta, in that there is no ultimate separation whatsoever between ourselves and the Supreme Consciousness. Such exalted thoughts meet considerable resistance in our rationalistic and materialistic age. So it is fortunate that we have a professional scientist in Sri Kuntimadi Sadananda to explicate Advaita from a rational and scientific point of view. Indeed, in the very first paragraph, Sadananda says that Vedanta is the 'ultimate science'. The essence of science is observation devoid of preconceptions. Whereas most sciences are concerned with the objects of observation, such as the sun, stars, planets, flora, fauna, chemical elements and so forth, only Vedanta enquires into the consciousness that is the necessary basis of all observation. So we are not relying on blind faith - the accusation often made against spiritual inquiry by those of a rationalistic bent. Rather we are reflecting on our own consciousness, without which all observation and knowledge is not even possible.

However, the consciousness (or knower) cannot be an object (the known). So in this sense, Vedanta departs radically from ordinary science. And if 'God' is identified with consciousness-a key claim of Vedanta-then God also cannot be an object of consciousness. Yet if our nature is indeed divine, then we have access to this reality, since it is our nature. Note that in Vedanta, God as substratum of the universe is referred to as Brahman, and God as our true inner nature as pure consciousness is referred to as Atman. A Mahavakya (or key saying) of the Upanishads (highest scriptures of Vedanta) is 'Aham Brahmasmi' or Atman and Brahman are one and the same.

How do we establish this awesome claim? Through introspection, and Sadananda's book provides a clear and detailed discussion of just how this is done. After all, as Sadananda points out, 'objective sciences cannot establish even the existence of a mind or thought,' but we all believe in these entities! (Interestingly, Vedanta thinks that mind is in fact a subtle form of matter.) Furthermore, the more we examine the so-called objective world, the less real it seems. A chair is made of fibers, which in turn are made of atoms, which are nebulous clouds of particles and energy that are still quite mysterious to physics, presenting many well- known paradoxes of quantum mechanics.