The book you hold is a culmination of my efforts for the last two decades to improve myself physically, mentally and intellectually through the discipline of Yog, which is one of the six schools of classical] Hindu philosophy.

These pages contain a tale based on the second chapter of the Patanjali Yog Sutra titled Sadhana Pada, which offers a sweeping overview of the philosophical as well as practical aspects of Yog. The Yog Sutra of Patanjali is widely accepted by tradition as a foundational text of the philosophy of Yog, which is erroneously considered by many to be a purely physical discipline involving body postures.

Yog is a holistic approach to living, thinking and responding. The physical aspect of Yog or asana (posture) is but one of the eight limbs of classical Yog as explained in the Patanjali Yog Sutra.

In the book you hold, the sutras or aphorisms of sage Patanjali have been presented in the form of dialogues among the characters in the story, who are traders from the Kutch region of western India. Among these worldly folk is Jagdusha Seth, the Jain trader from 12th Century Kutch renowned for his charity, moral uprightness and wisdom.

I have deeply personal reasons for writing this book. Before Yog found me, my life had been one of excess, had been damaging my body and mind with my unregulated eating, chain smoking, alcohol and all-night parties. The lifestyle took a toll on my health, unsettled my mind and strained my relationships.

It was after a long struggle to find my way out of the pit Thad dug for myself that I zeroed in on the Patanjali Yog Sutra. This scripture became the foundation of the new life I built for my self. In the years that followed, I learned at the feet of some of the best teachers of Yog in India, and as the depths of the Patanjali Yog Sutra opened up before my startled eyes, life began to change.

I became a student of bodybuilding, Pilates and Kalari Payattu, the ancient Indian fighting system believed to be the mother of all Oriental martial arts. ] explored music, dance and traditional Indian breath work or Pranayama, which is one of the eight limbs of eight-fold Yog. The wonderful flowering I have experienced since then has placed a debt of gratitude on my shoulders to the sage Patanjali, the author of the Yog Sutra. The writing of this book with my friend Satish Purohit is my attempt to repay a small part of that debt. I hope that the labour of love involved in writing this book will inspire other seekers to undertake the journey into their selves with the light of the Patanjali Yog Sutra as their guide. [have added my notes on each aphorism in the Sadhana Pada section of the Patanjali Yog Sutra at the end of the book. Kindly note that these jottings are personal attempts on my part to make sense of the profundity of the Yog Sutra. They should not be taken as the last word on the intended import of the sutras.

I sincerely hope that this tale of Jagdusha, the first in a four-part series, will inspire many spiritual seekers to _ undertake an independent study of the Patanjali Yog Sutra under the guidance of traditional Hindu yogis, swamis and acharyas, whose unbroken lineages have preserved, taught and lived the deeper truths of Yog for over 5,000 years. Salutations to the One who has been called OM in the Veda. The Science of Self- Realization: A Guide to Spiritual Practice in the Kriya Yoga Traditon (Patanjali’s Yoga-Sutras
9.0 inch X 5.7 inch
$29.00 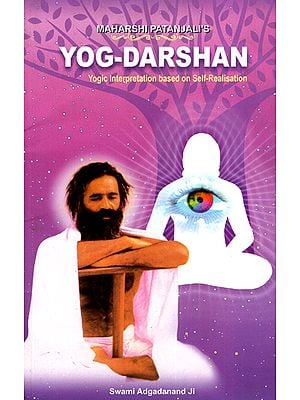 Patanjali's Yoga Sutras With the Commentary of Vyasa and the Gloss of Vachaspati Misra, and an Intro. by Srisa Chandra Vasu
8.5" X 5.5"
$35.00