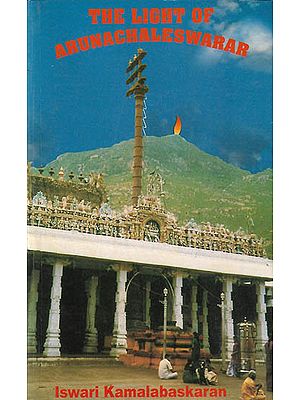 The author, an Englishwoman has been visiting Tiruvannamalai annually for over 20 years. A student of Philosophy, a lecturer in world religions, founder member and former trustee and secretary of the Board of trustees, London Highgate murugan Temple and the Sri Raja Rajeswary Amman temple , Stoneleigh , U.K., she found herself being drawn to the Temple of lord Arunachaleswarar, and the light he has shed on millions. In the light of Arunachaleswarar, Iswarai Kamalabaskaran recalls her over experiences and narrates what she has learned over the years about the Lord, His mountain and the Jyothi Lingam.

The narrative begins with an invitation to the reader , to join her on the journey that takes her to her first meeting with the sacred Aruna Sivalinga Mountain. The reader is then taken from prakakaram to prakaram through the Arulmigu Arunachaleswarar koil (temple ). And during this unforgettable experience, the reader begins to understand the supreme holiness of sacred Tiruvannamalai in Tamil Nadu, South India.

At the same time, the wonderful history of the Aruna sivalinga Mountain unfolds and the reader is shown how the Jyothi (light) of Annamalaiyar has spread outwards for the sacred Linga, since the dawn time and how, in the modern era, the same light continues to fill the world. the author explains that this Divine light has always been here , even if the reader has been unaware of it . by the end of the book , the reader will find that this is an unending saga of holiness bridging the centuries.

Iswari Kamalbaskaran’s re-creation of her journey to Arunachaleswarar help the reader to be touch d by the Jyothi of Annamaliyar . Once touched, the reader’s soul becomes enriched and he or she longs to see the sacred Aruna Sivalinga Mountain and the Arumigu Arunachaleswarar Koil.

The Author of this book is an English lady, who us an experienced teacher and a visiting lecturer in world Religions. A Hindu, she has followed the philosophy of world Religions by her Poorva janma intuition. She has been the only woman to serve as trustee of the London Highgate Lord Murugan temple.

She has been a pilgrim to Tiruvannamalai, the holy Mountain and the Lord Arunachaleswarar Temple, for the past ten years. She has also read much about the development and the history of the temple. The result is the Light of Arunachaleswarar.

I have read the Light of Arunachaleswarar and found the grace of jyothi in it. The divine nature is manifest throughout the book. It is very difficult to understand Lord Amnnamalaiyar, the secrets of the Mountain, the Jyothilingam etc,. but these have been explained with great simplicity in the book. She also explains lucidly the formation of the jyotirlingam, the sivasakthi Union, the Arthanary from and the divine marriage. I read with wonder her description and explanations of the Holy festival of the Sivan Temple, the Siva Parvathi union and the theory of the festivals.

The temple Plans , the structure of the Temple and the Prakarmas are all shown and described. The author explains the theory of siva in her books, narrates the divine points and concludes that “ The Mountain is nothing but lingam.” I marvel at how well she understands Vedic theory and how she is able t clearly explain the greatness of appear, sundarar, Manikkavaachagar, Arunagiri Nathar, sri Seshadri Swamigal etc.

The Hindu religion is an ancient religion. There have been any sages and rishis who have lived over the centuries. The reader can understand the greatness of them all from this book.

I have asked the author how she came to write such a wonderful book and what made her write it. Her frank answer was that some invisible light illuminated her mind and she put down what it revealed. This must be so, because several unknown things are found and explained in this book and this can only be out of God’s grace.

I wish this book finds itself in the hands of every religious-minded person as well as the non - religious. As Sri Seshadari Swamigal tells us through Annia Uma Deviar: