Smt. Kamala Subramaniam was born on October4, 1916 in Banglore. Her father was the eminent Kannada poet and dramatist, Shri T. P. Kailasam. She Studies under the distinguished scholar Prof. B. M. Srikantiah. She read avidly both classics and modern thrillers and her knowledge of English literature, especially of Shakespeare, was profound. She also loved philosophy and knew her Bible as well as she knew the Gita.

In 1937, Smt. Kamala married Dr. V. S. Subramaniam, a renowned E.N.T. Surgeon of Madras. In spite of her family concerns, she pursued her literary interests and wrote a series of imaginary conversations on the model of Landor’s for Triveni under the pen-name “Ketaki”.

Herlove of literature, nursed over the years, expressed itself in her developing a fascination for the Epics and Puranas of India.

In the late 60s Smt. Kamala underwent and operation for cancer, which gave her a ten-year lease of life. Lesser mortals would have been un-nerved by this but for Smt. Kamala it came as a challenge and this period turned out to be the most productive literary period of her life.

Her first labour of love was the retelling of the Mahabharata. In this masterly condensation, of India’s great epic, Smt. Kamala captures with dramatic intensity the movement of the story. As the episodes unfold in Smt. Kamala’s vivid narrative, one seems to hear Draupadi’s wail of distress, Duryodhan’s arrogant laughter, and even the twang of Arjuna’s bow, the Gandiva.

The epics and puranas epitomise our culture. The heroes and heroines set high standars of nobility, heroism, and chivalry. They have moulded the life and outlook of generations of Indians.

Smt. Kamala Subramaniam has left a priceless legacy for the young and the old.

Smt. Kamala was so self-effacing that she would not even permit her photograph to be printed on the jackets of her books. As a friend of hers wrote: as she wrote, she felt, as she felt, she lived in her invisible world and as she real for her and so it will grow for us when we read books.

Smt. Kamala Subramaniam has attempted not only a summary of the great and wonderful epic, Mahabharata, but has also brought out the magic of its human interest and spiritual profundity. Besides brining the central story into relief, she has give due place to all important conversations and episodes.

To quote, what I wrote about Mahabharata in 1951.

“The Mahabharata is not a mere spic; it is a romance, telling the tale of heroic men and women and of some who were divine; it is a whole literature in itself, containing a code of life, a philosophy of social and ethical relations, and speculative thought on human problems that is hard to rival; but, above all, it has for its core the Gita, which is, as the world is beginning to find out, the noblest of scriptures and the grandest of sagas the climax of which is reached in the wondrous Apocalypse in the Eleventh Canto. Through such books alone, the harmonies underlying true culture, I am convinced, will one day reconcile the disorders of modern life.

To an English reader, this volume will bring home the validity of the comment made by generations of Indian authors that “what is not there is nowhere to be found”.

Smt. Subramaniam’s style is lucid and expressive. At places, it reads not as a summery, but the original.

Smt. Subramaniam has rendered great service to the English-knowing public which has neither the time nor ability to read the original.

I congratulate her on the conscientious labour that she has put in preparing this volume.

In those days, that is twenty-five o thirty years ago, children were more familiar with these two stories then they are now. It was then the fashion to stage these stories and also there used to be Harikathas where the stories were narrated to an audience. But now the days are changed. I have noticed that, on the whole, many children and youngsters today are almost strangers to the stories. This is indeed a sad state of affairs.

I have always wanted to share the Mahabharata with everyone, specially youngsters. There are a number of difficulties attending this. The most conspicuous of them is, of course, the length of the book. It is made up eighteen volumes, “Parvas” as they are called; and each is made up of roughly three to four hundred pages of poetry. Unless one is devotes to the epic it is not possible to read it through easily. The language is the next hurdle. Nowadays there are very few youngster who are familiar enough with Sanskrit to read through the book in the original.

The only alternative is to read translations. I have seen several translations of the Mahabharata, and not one is satisafactory. They are all literal translations. A literal translation is like the wrong side of a tapestry: the threads are all there but the pattern is missing. It is so with this great epic. It is not possible to do full justice to it in a literal translation. The English used by the translator is not suited to the elaborate similes which are common to Sanskrit. Let me quote a couple of instances. In Sanskrit Arjuna is called “Bharatarshabha”. This is very Pleasing to the ear in Sanskrit. But, when translated into English it has to be” “O Bull of the Bharata Race!”. One can see how awkward it sounds. Again, a woman is addressed as “Mahagajagaamini” In Sanskrit. In English it has to be “O woman with the gait of an elephant in rut!” This sounds so ridiculous. Literal translations fail because of the vat difference between the Eastern and the Western ways of description. Indian ideas of beauty are far different from those of the West. Again, I have seen several condensation of the Mahabharata: books which give us just the story of the epic. Here again, there is a handicap. The story is there of course. But the characters in the story are not handled properly. They cannot be, since there is not enough space for it.

For a long time I have wanted to write a book which will rectify these faults. I have wanted to present the book in such a manner that the story will capture the imagination of the reader. I want my book to be a narration of the stupendous drama which was enacted years ago. To me the Mahabharata is like a Greek Tragedy. I am fascinated by the many characters who appear in it. I have tried to bring out the characters of the many heroes who appear in it, as sympathetically as I could. Having studied Shakespeare, one cannot help studying the angle the epic present immense possibilities.

Considering all these things, I have rendered the epic into English. It is not quite a translation” into in the usual sense of the word. One might call it a ‘free translation’. I have tried to narrate the story as dramatically as possible. I have narrated it in simple straightforward English. In this task, if one has to retain the spirit of the epic and the atmosphere, one has to fall back upon the quaint, old-fashioned English. This seems to suit the epic perfectly. At times, crisp clear English does not work. I find the blending of the old and the new to be the perfect medium for the narration. So I have deliberately adopted the style, which to my thinking, is absolutely perfect.

My aim, as I said before, is to bring out the dramatic significance of the many scenes. Wherever the situation was worth some trouble, I have taken the trouble and added a few touches, a few thoughts of my own, to enhance the dramatic value of the situation. But I have been faithful to the original throughout: except, perhaps, in two places or three. Even there, I have not-departed from the facts. Only I have tried to intensify the dramatic value of the situation by my embellishments. One of them, if I remember right, is the names of the villages which Yudhisthira asks for. The names Indraprastha, Vrikaprastha, jayanta and Varanavata do not occur in the context. But they are mentioned in the play Venisamhasa and I have used them. The other, is perhaps the scene in which parikshit is given life. But the scene itself is so sublime that no exaggeration can be considered sufficient for the grandeur of the scene.

If, after reading the book, a few at least will read the epic in the original, my desire will be fulfilled. May I say that my book is just a guide into vast ocean called the Mahabharata?

The Mahabharata is not a mere epic; it is romance, telling the tale of heroic men and women and of some who were divine; it is whole literature in itself, containing a code of life, a philosophy of social and ethical relations, and speculative though on human problems that is hard to rival; but, above all, it has for its core with Gita, which is, as the world is beginning to find out, the noblest of scriptures and the grandest of sages the climax of which is reached in the wondrous Apocalypse in the Eleventh Canto. Through such book alone, the harmonies underlying true culture, I am convinced, will one day reconcile the disorders of modern life.

To an English reader, this volume will bring home the validity of the comment made by generations of Indian authors that “want is not there is nowhere to be found.” 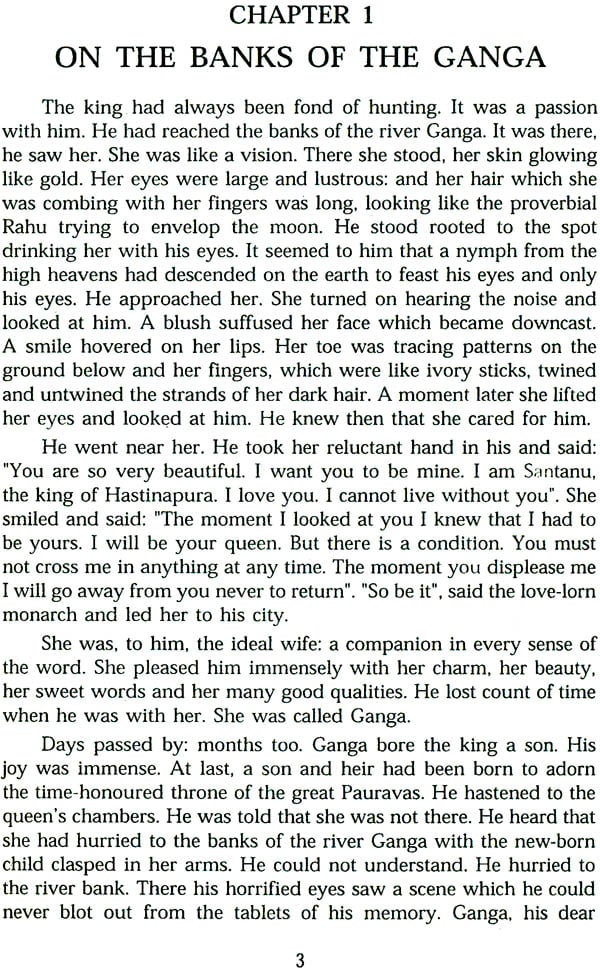 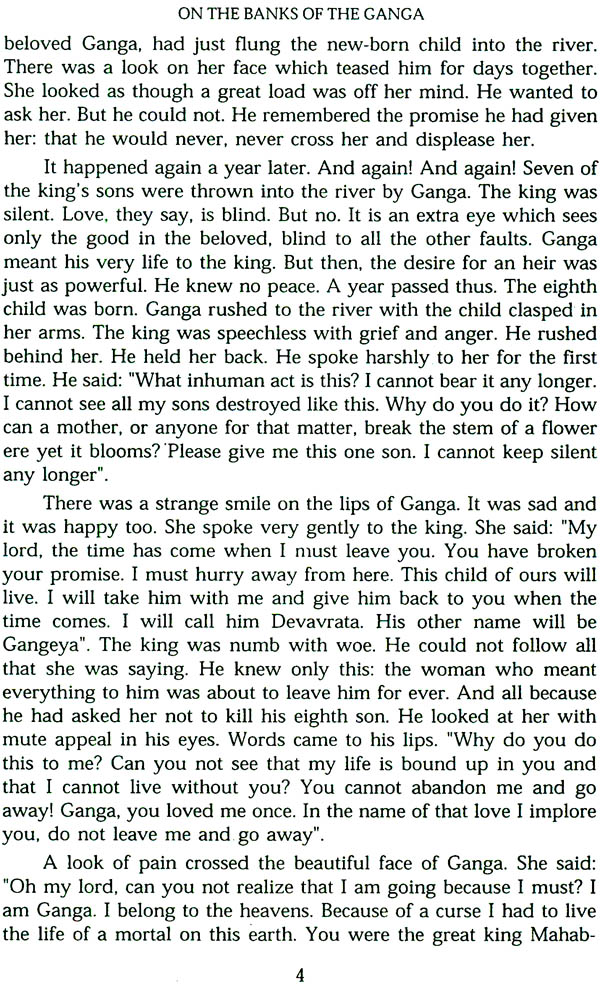 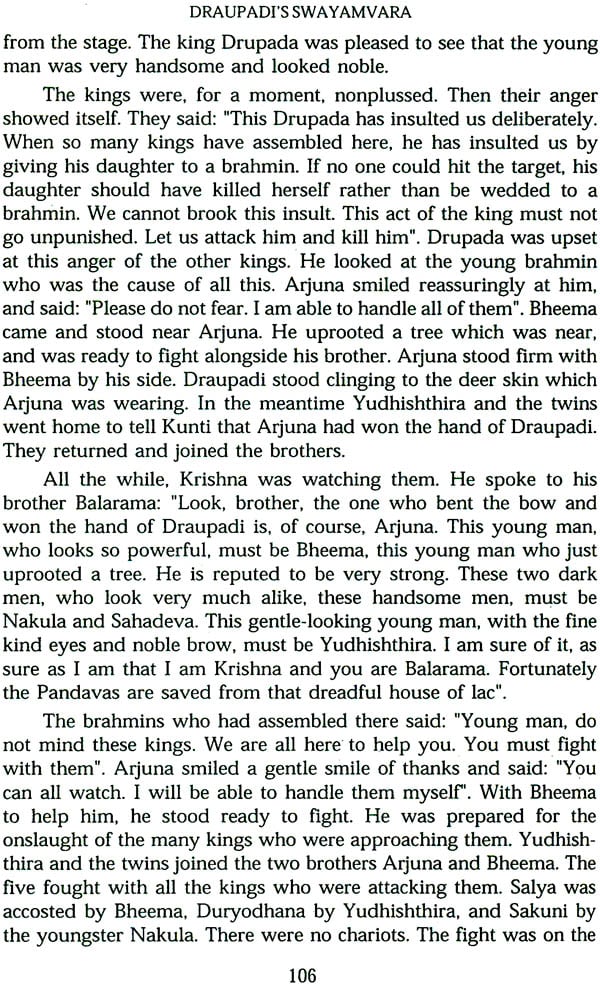 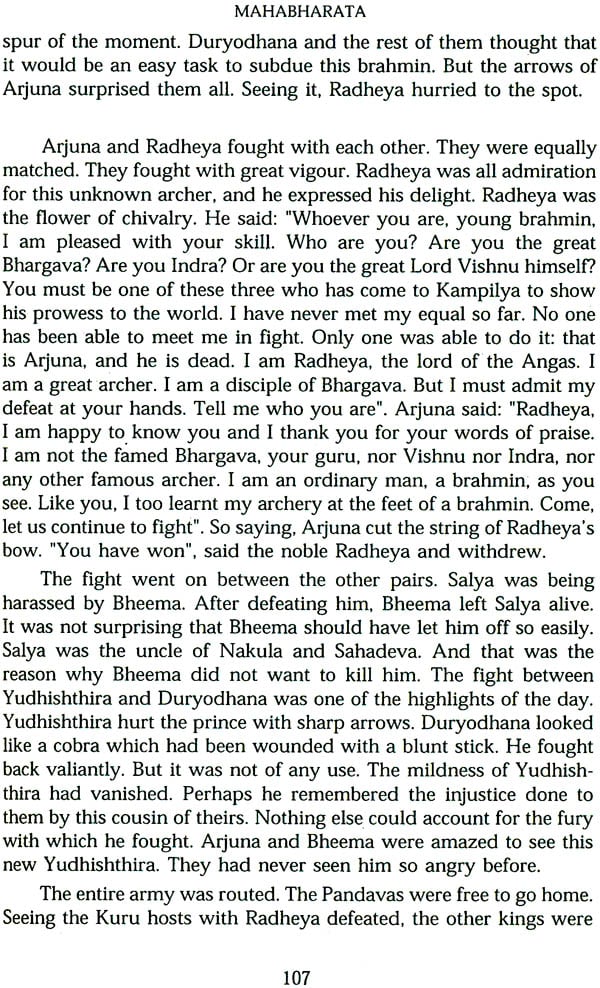 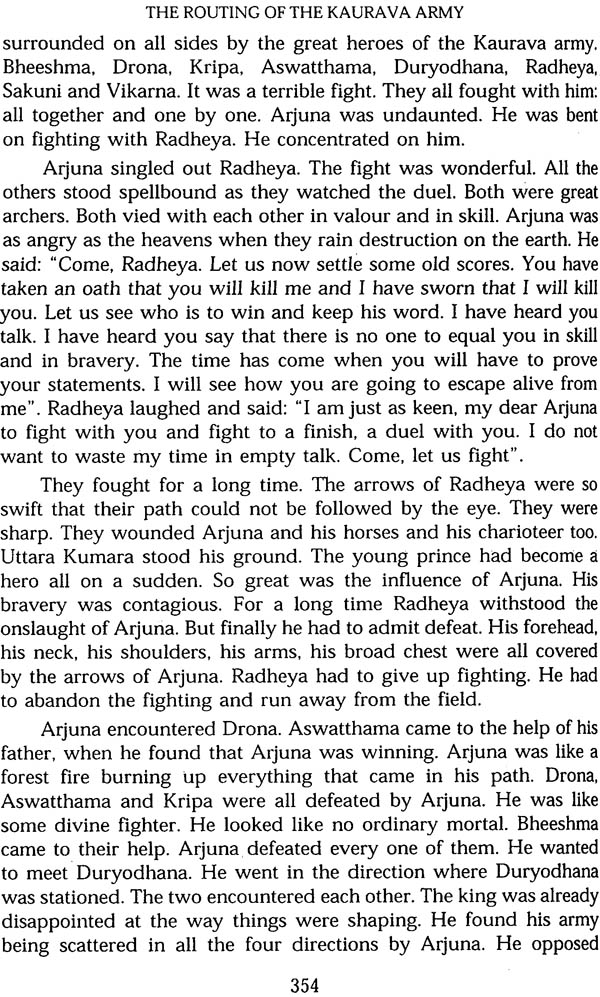 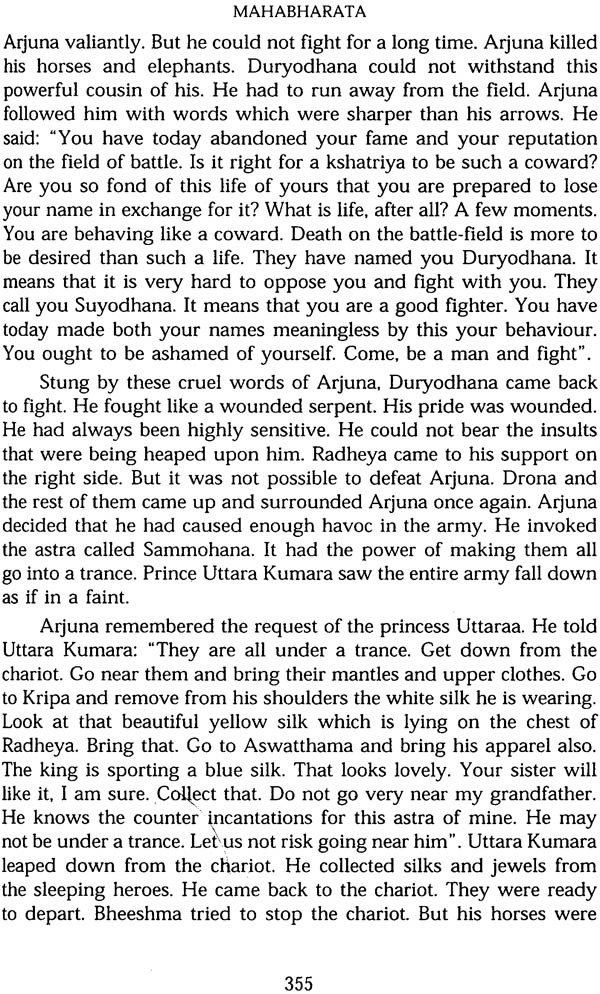 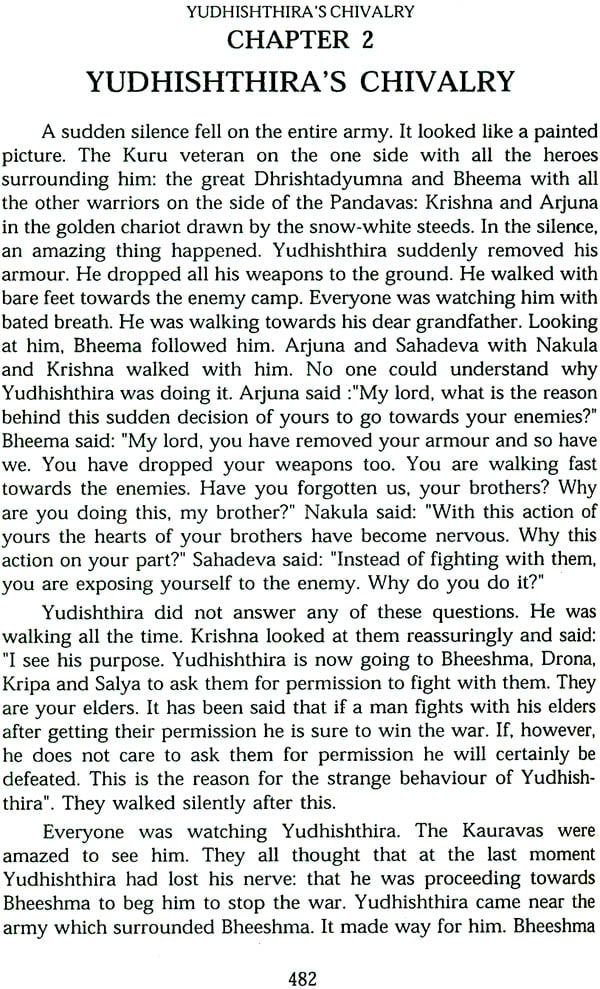 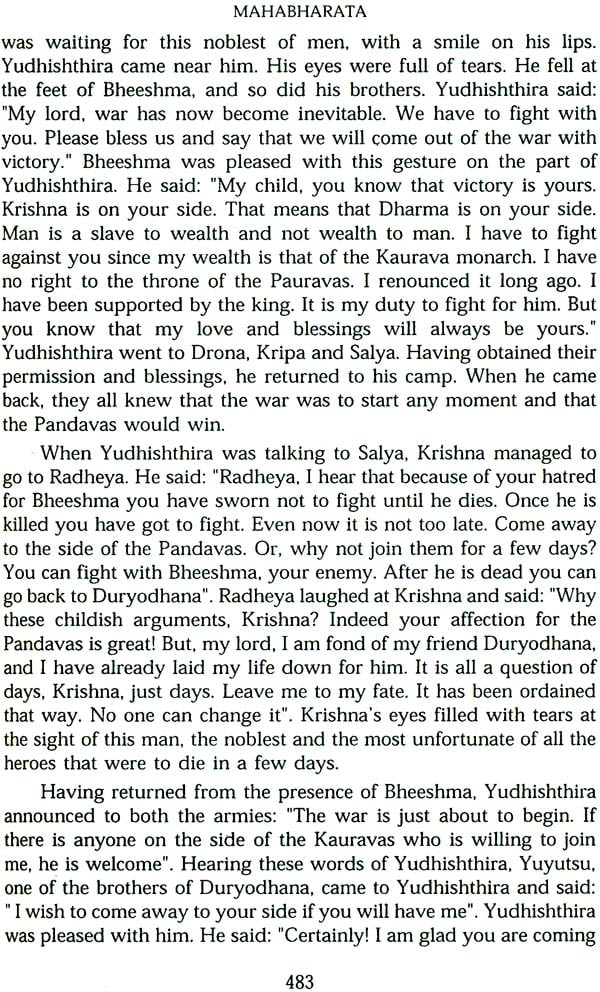 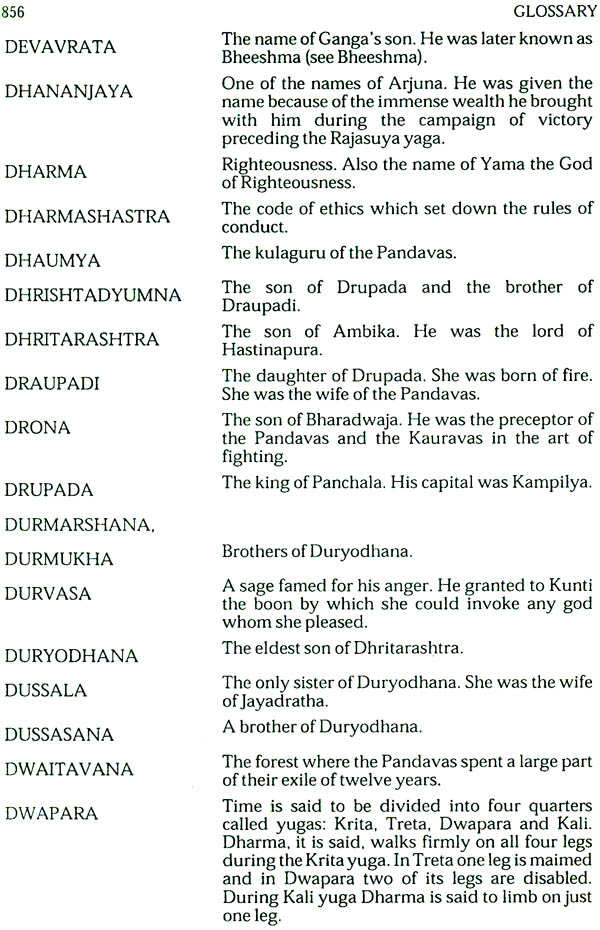 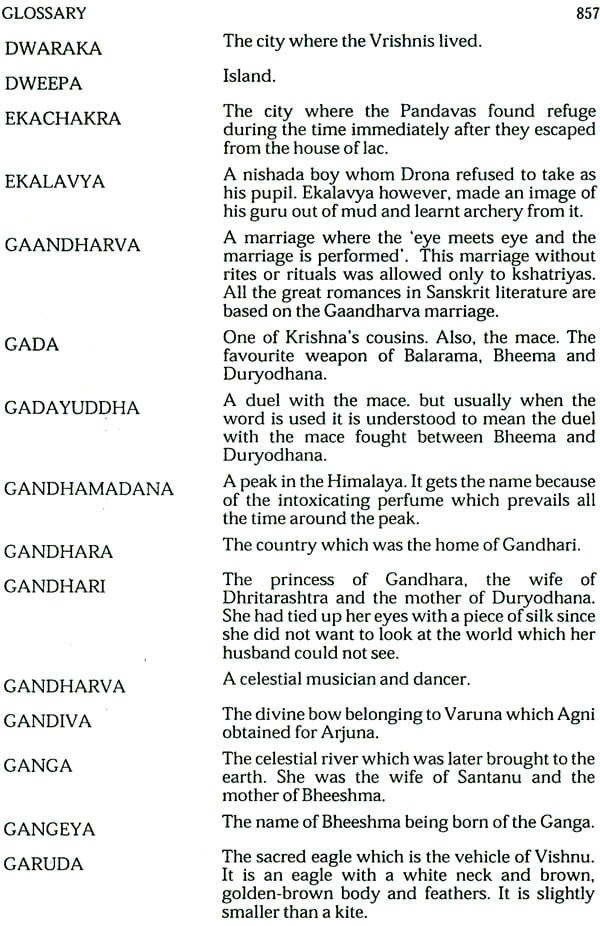 Indraprastha - The Earliest Delhi Going Back to the Mahabharata Times
By B.B. Lal
$37
FREE Delivery Secrets of Mahabharata
By Rajeev Agarwal
$15 Discourses on The Mahabharata
By Anandmurti
$23
FREE Delivery Science and Technology in Ancient India as Reflected in the Mahabharata
By A.R Vasudeva Murthy
$18 On the Meaning of the Mahabharata
By V. S. Sukthankar
$27
FREE Delivery