P'howa is a Vajrayana Buddhist method by which one's consciousness is intentionally transferred to a pure realm at the moment of death. P'howa training enables one to approach death as a unique opportunity for liberation from cyclic existence rather than as an experience of fear and uncertainty. In this book, Chagdud Khadro explains the process of dying, the steps involved in p'howa training based on the hidden treasure text of the Buddhist meditation master Rigdzin Longsal Nyingpo, the means of accomplishing p'howa at the time of death either for oneself or for others, and integrating p'howa into one's daily meditation practice.

Chagdud Khadro is the wife of His Eminence Chagdud Tulku Rinpoche and a lama of the Nyingama school of Tibetan Buddhism, recognizing her signs of accomplishment in p'howa practice as well as her ability to help others achieve signs, Rinpoche authorized her to teach p'howa, which she has done in the United States, Europe, South America, and Australia. She is developing p'howa support groups among practitioners who make a commitment to assist each other at the time of dying.

His Eminence Chagdud Tulku Rinpoche, a highly revered master of the Nyingma tradition, has taught widely throughout the world and has established many centers for the study and practice of Vajrayana Buddhism, His main center in North America is located at Rigdzin Ling in Junction City, California. He currently lives in Tres Coroas, Brazil, where he is establishing his South American seat.

THIS P’HOWA BOOK has been written as a man- ual for those who have received teachings and training from a qualified p’howa teacher. It has not been written for the general dharma read- ership, and does not include the wealth of sto- ries and personal insights that have enriched the oral transmission of His Eminence Chagdud Tulku Rinpoche over the years. Nor is this a scholarly presentation, for I do not have the slightest pretense of being a scholar, either by Tibetan criteria, which are very exacting in- deed, or by Western standards. This book is merely a reference, a reminder of essential points covered in the oral teachings.

Nevertheless, as short as the book is, it has taken a surprisingly long time to write, for p'howa incorporates all the fundamentals of Vajrayana development and completion stage practice and brings about profound insight into the workings of mind, speech, and body. Being a practitioner of limited acuity, it has taken me quite a while to be able to draw on a depth of experience that would produce a useful work. I am totally grateful to Chagdud Rinpoche for teaching me p'howa twenty years ago in Nepal, for encouraging me to compile his teachings, and for authorizing me to teach. Rinpoche has many manifestations, both peaceful and wrath- ful, but at the core lies almost infinite patience, with me, with sentient beings. Without his will- ingness to teach me, again and again correcting and expanding my practice, I surely would not be able to teach and guide others in the accomp- lishment of p'howa.

It has also been a great privilege-and re- sponsibility-to work with a hidden treasure text (Tib. terma) of Rigdzin Longsal Nyingpo, long a dharma hero of mine. Born in 1685, prophesied as a great lama, by the age of seven he had mastered reading and writing and in- sisted that he wanted to be a monk. He was prevented from taking ordination by his father until, at twenty, he ran away to Katog Gonpa. There he trained under Dempa Konchog Gyalt- sen and received Great Perfection (Dzogchen) transmission, directly recognizing his own ab- solute nature. An extremely diligent practi- tioner, who allowed no hardships to interfere with his retreats, he was revered by the dharma protectors, who became his servants, and he was tested by the local deities, whom he tamed. Although he had a peaceful demeanor, he was feared by demons, whom he overwhelmed by miraculous powers.

At twenty-eight he left the monastery and practiced in solitary, dangerous places. Soon after, he met Dudul Dorje, his main teacher, who received him just as would a father being reunited with his son. Dudul Dorje told him, "You have hidden treasure texts to reveal," and offered him advice. Once more Longsal Nyingpo entered retreat. A few years later, when he was thirty-two, Guru Padmasam- bhava, dressed as a yogi, approached him and gave him an index of treasure texts to reveal. He continued his retreat until his realization had fully ripened.

This would be the pattern throughout his life, to perfect accomplishment in retreat. After re- vealing each of his treasure texts, he entered retreat to ensure that every aspect of the prac- tice was completely brought forth and to estab- lish a powerful foundation for practitioners who would follow him. Nothing that he could achieve by effort did he leave to chance. This, as much as his qualities as a revealer of hidden treasure texts and as a siddha, made him a heroic practitioner.

The time came when it was appropriate for Longsal Nyingpo to reveal the hidden trea- sure text of a practice related to the wrathful form of Guru Rinpoche. The treasure was lo- cated near a monastery of a different tradition, whose residents were at least skeptical about, and probably hostile to, a Nyingmapa treasure text being revealed in their vicinity. When Longsal Nyingpo sent a message requesting the monastery's cooperation in revealing the trea- sure, the monks conspired to thwart him. Thus, when Longsal Nyingpo rode up to the monas- tery, he encountered prayer flags dyed black instead of the usual array of colors. Instead of fragrant cedar incense, the acrid smell of gugul, used to banish demons, filled the air. Instead of auspicious prayers, the monks rumbled wrathful incantations. He dismounted, they led him to a throne draped in black, and Longsal Nyingpo thought how perfect the signs were. Not knowing that the treasure text to be revealed was Wrathful Guru Rinpoche, the monks had inadvertently created the best pos- sible interdependence for the fulfillment of wrathful activity.

One day, while Longsal Nyingpo was trav- eling in Tromtar, the region of Chagdud Rin- poche's birth, a man offered him a fine copper pot. His wife, who was very fond of the pot, in- wardly regretted the offering. Longsal Nyingpo, seeing her thoughts, took a horse hair and cut the pot precisely into two halves, and ac-cepted only one as an offering.

The Practice of P'howa, the transference of consciousness at the moment of death, has been one of my primary means of benefiting others since I was a child. In this life and indeed-from the stories I have heard - in my preceding lifetime, I seem to have had the power to accomplish p'howa.

When I left Tibet in exile in 1959, I realized that competence in p'howa would be extremely useful for my fellow refugees, faced as they were with aggression, deprivation, and unfamiliar conditions. I began to teach the practice widely.

In Nepal in 1978, when I taught the practice to a group of Western dharma students for the first time, my future wife, now known as Chagdud Khadro, was among them. She attained signs of accomplishment rather easily, and over the years she showed more and more interest in the practice. In 1986, on the basis of clear indications that arose in meditation, I authorized her to teach, and in 1997 I authorized her to give the necessary Amitabha empowerment. I feel confident she will not lead others astray, and I have seen tha those who practice with her achieve signs of successful practice. I hope that this compilation of teachings will enhance the confidence of those who have received p'howa instruction. I pray that they will find liberation into the pure realm of Dewachen at the moment of death. 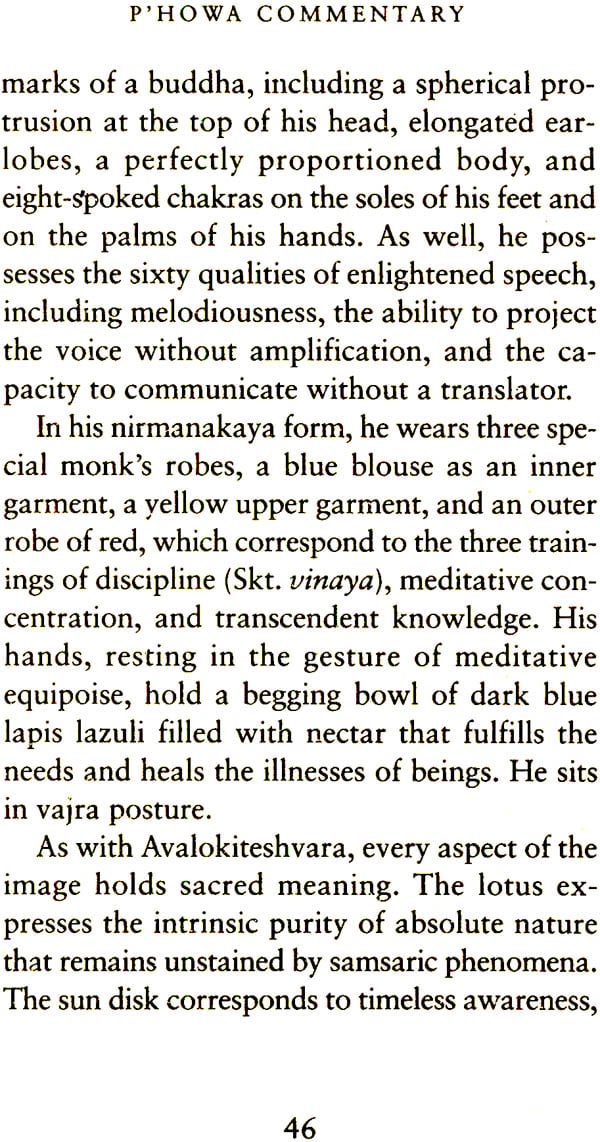 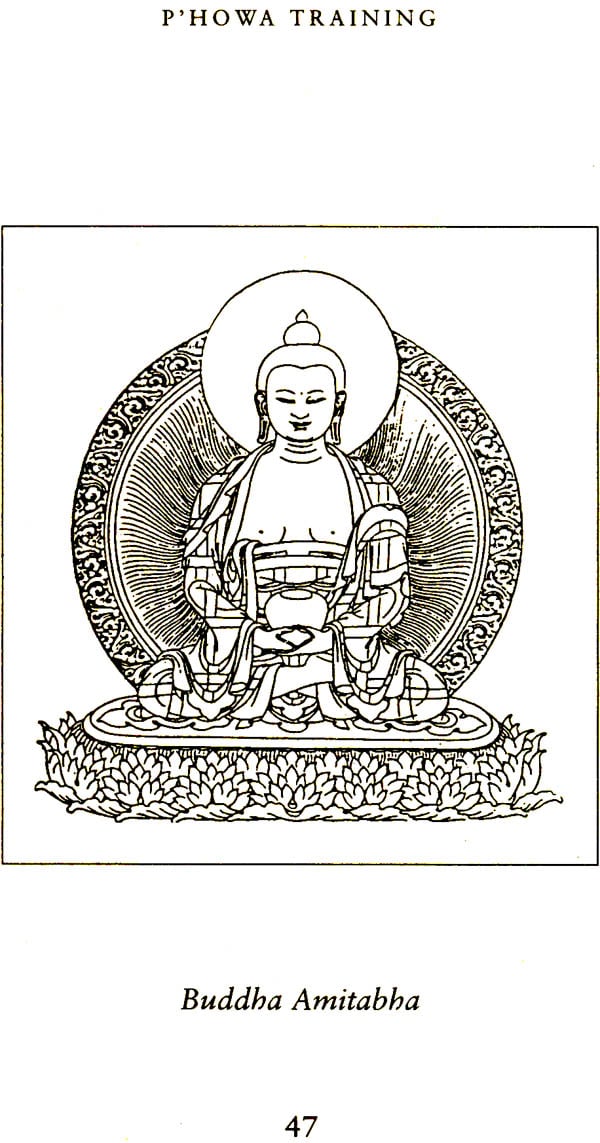