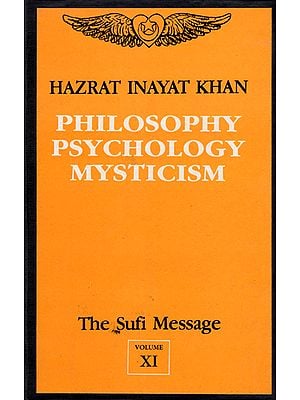 "There are three steps which lead the seeker to the altar of divine wisdom": philosophy, referring to the perception and study of things; psychology, learnt by thinking and feeling what is in our human nature and character: mysticism acquired and learnt through meditation and the study of the whole of life, both seen and unseen. The book opens new avenues of thought, attitude and life to the reader with open mind and heart.

First aspects of the physical nature of life as perceived through the five senses arc discussed. They are surprisingly modern although they have been given as lectures in the twenties.

Then the psychological aspects are covered, first focusing on the subjects of suggestion as a way of coping with the complications in life by acquiring a spiritual and most practical attitude in life; and then presenting magnetism as a more positive way of dealing with our tasks in life, particularly in dealing with others.

Finally, mysticism is presented under a surprising variety of subjects, thus illustrating the practically and at the same time the aloofness of the spiritual path.

After these teachings-sometimes called the magnum opus of the master-you will find a rich collection of sayings under the title Aphorisms. One may be struck by the wisdom, subtlely and power of these illuminated words.

Philosophy, Psychology,Mysticism opens new avenues of thought, attitude and life to the reader with open heart and mind. The Introduction to this part of the book is very englightening. Under the heading of Philosophy aspects of the physical nature of life are discussed from a spiritual point of view. Although the text has been delivered in the form of lectures and meditations during the twenties they present themselves as modern in terms of the new developments in physics. Spirit and matter, vibrations light, illusion and reality are among the themes discussed. For the treatment of the subjects of sound and voice, one is referred to volume II: Tile Mysticism of Music, Sound arid H 'ord. The main topics under the heading of Psychology are suggestion and magnetism. The scope of the teachings is mainly how one can keep on in this life of complications, on the one hand coping with all that one is confronted with, and on the other hand how to direct oneself in a positive way.

Mysticism is a wonderful collection of inspiring teachings on a surprisingly wide variety of subjects, including e.g. brotherhood and beauty. It offers an inspiring guide through life's puzzling ways.

It has already been observed in the preface to Volume I of The Sufi Message that to arrange systematically y the Sufi Mystic's work would be a very difficult task. Practically all the subject-matter contained in these volumes consists of transcripts of lectures given by him during the years he lived and taught in the West from 1910 to 1926. The range and diversity of his subjects were remarkable, and very often the same theme was taken up again after an interval of several years and treated in a somewhat different way and in another context. Thus Hazrat Ina yats ontological teachings are dispersed over most of the volumes of this series. But in the last two years of his life he gave, in three sets of lectures delivered during the Summer Schools at Suresnes in 1925 and 1926, a highly interesting synopsis of the subjects he called Philosophy, Psychologyand Mysticism, in the particular sense he attached to these terms. The resulting book may possibly be regarded as the master's magnum opus. After having been used for a number of years as instructive at the Summer Schools subsequent to Haz ar at Inayat Khan death, they were published for the first time in 1956. This new edition differs slightly from the former in that the text, which had been kept so close to the spoken word that to read it was not always easy, has now been better adapted to the printed page. Naturally great care has been taken not to change the exact meaning of Inayat Khan's teaching.

The present volume ends with a collection of Aphorisms, which were first published in a very limited edition de luxe in 1927. They consist of sayings and statements of Hazarat Inayat Khan which were collected by one of his pupils, but before authorizing their publication Hazrat Inayat Khan himself checked and carefully revised them. They vary from philosophical statements to poetical expressions stemming from a higher consciousness. 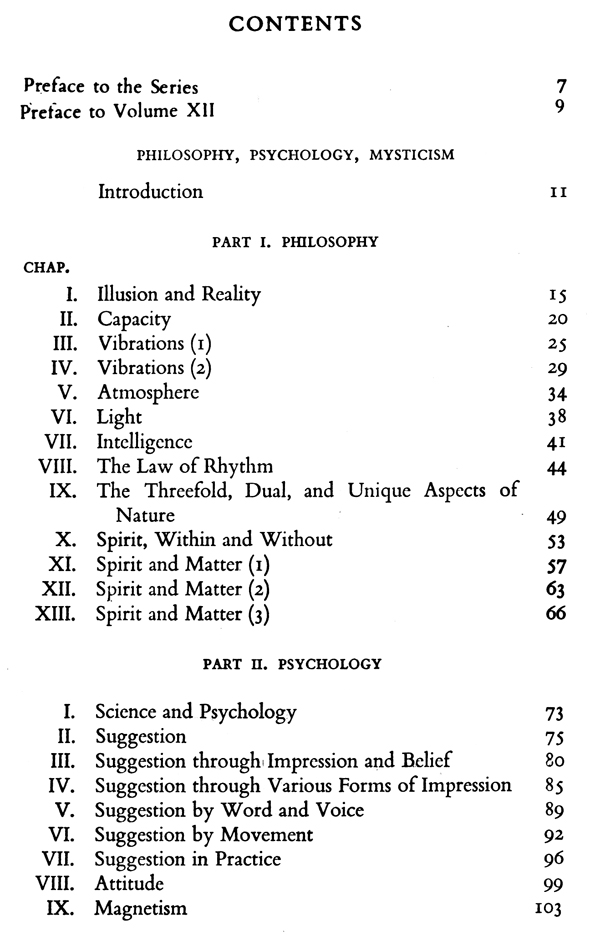 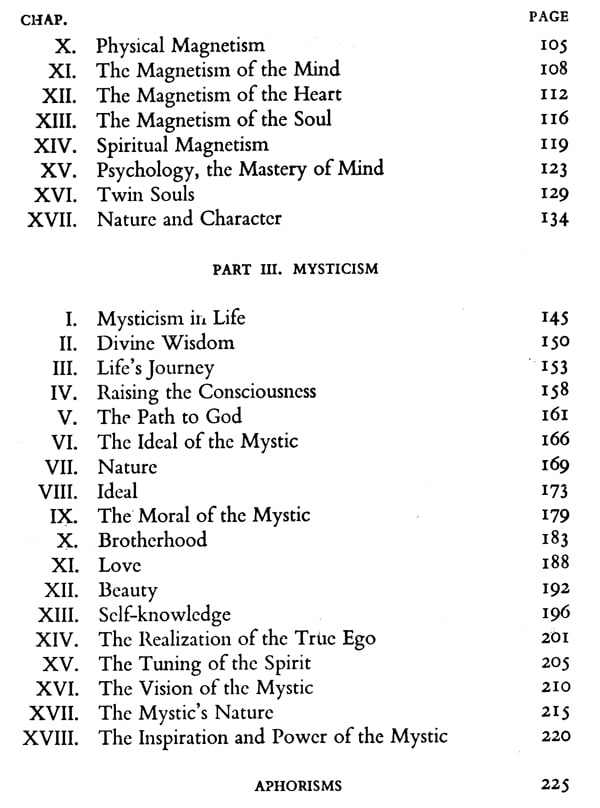 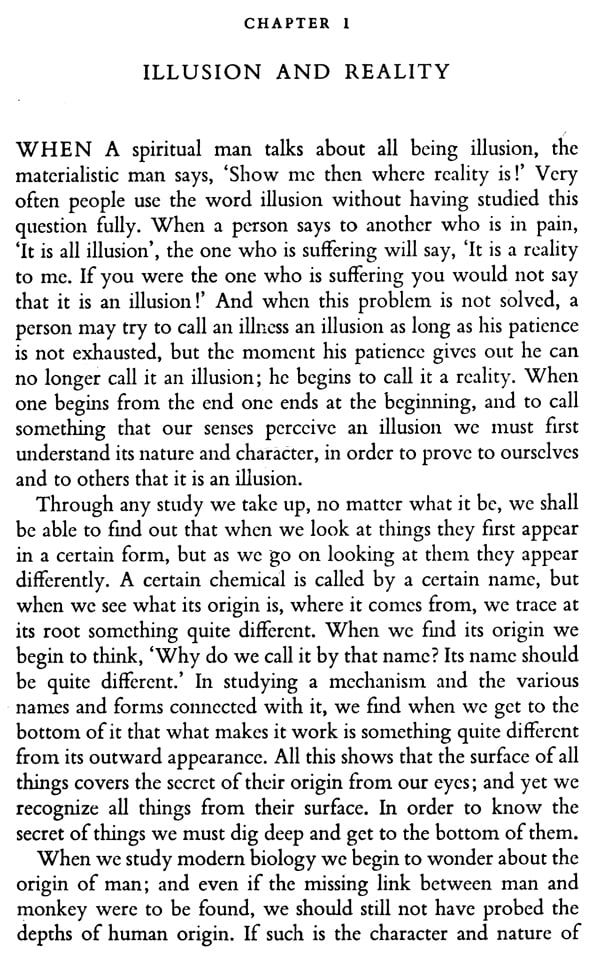 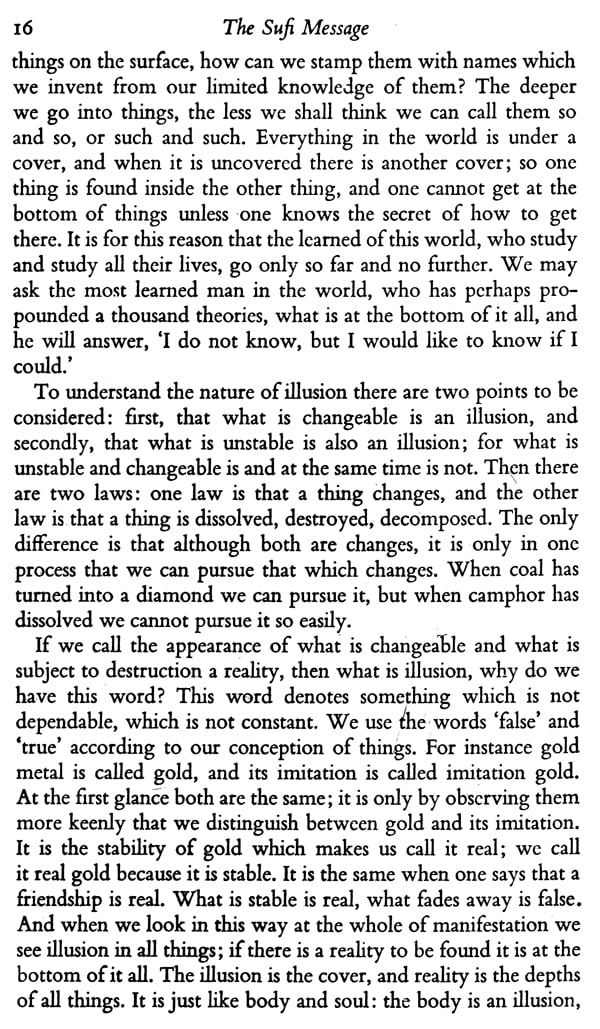 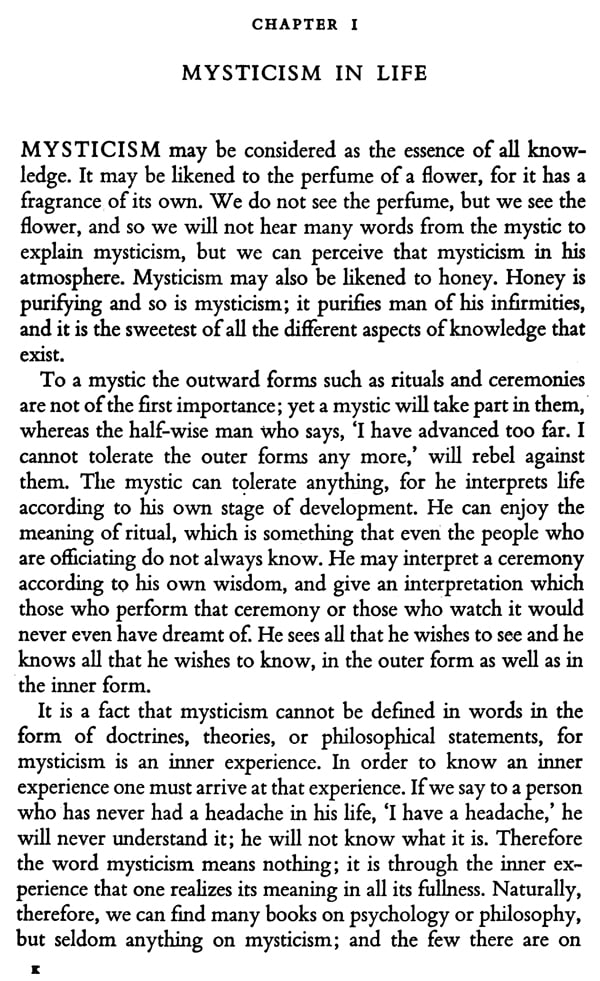 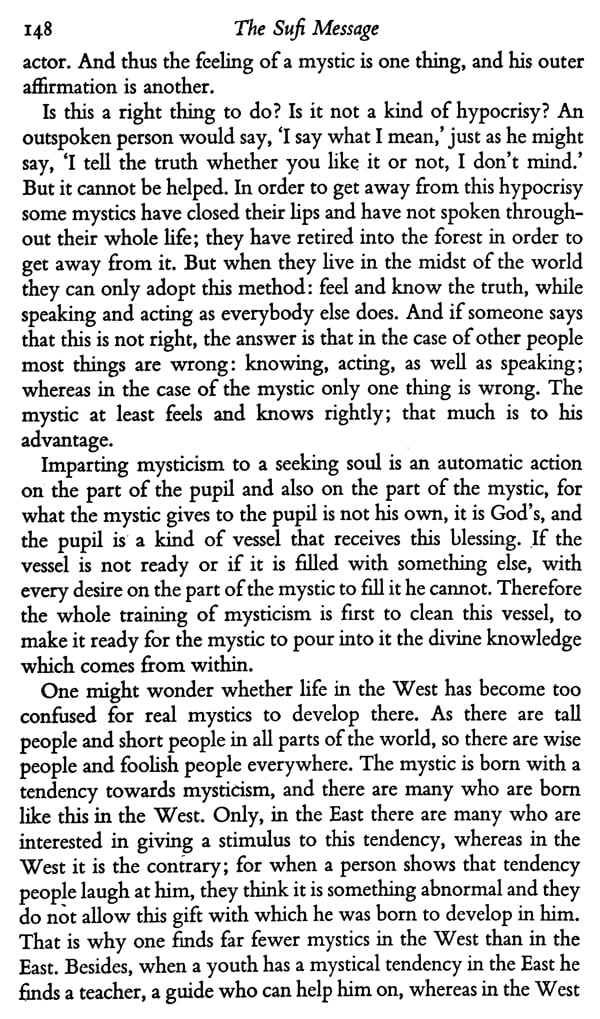 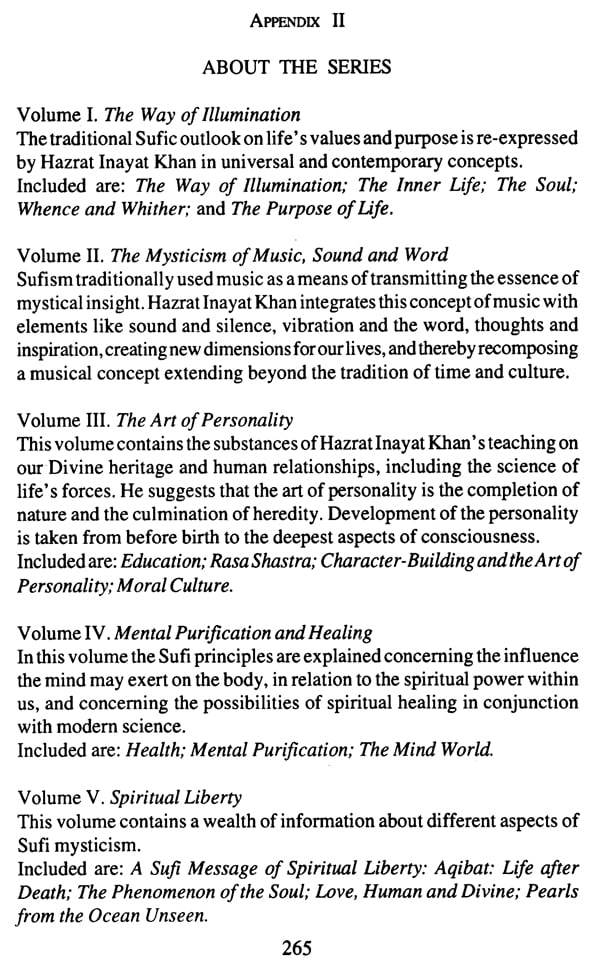 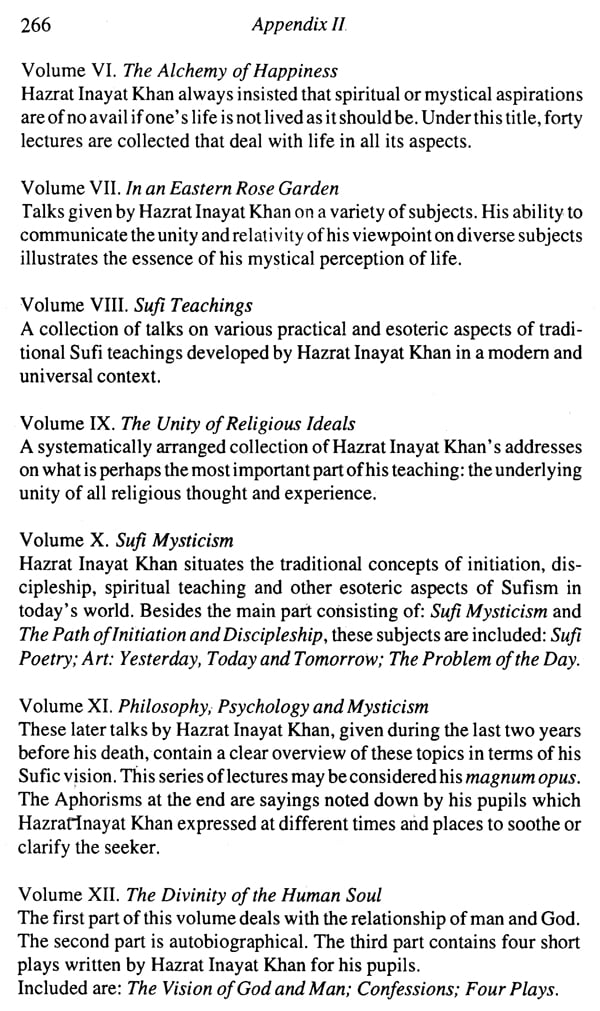 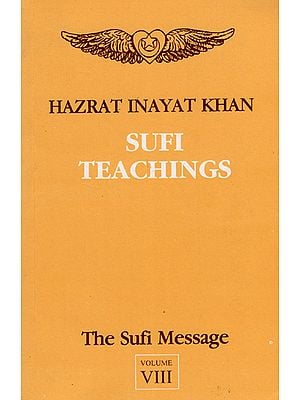 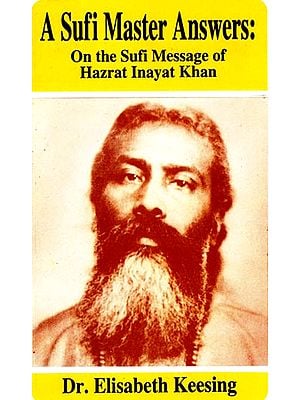 A Sufi Master Answers: On the Sufi Message of Hazrat Inayat Khan (An Old and Rare Book))
By Dr. Elisabeth Keesing
$29.00 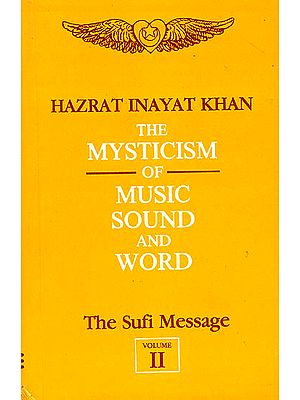 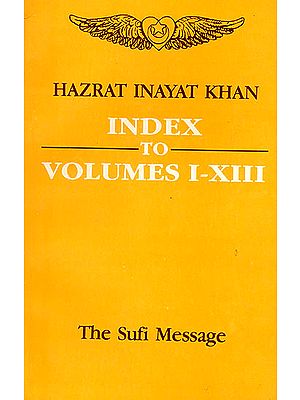 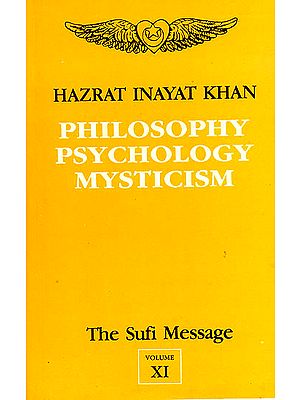 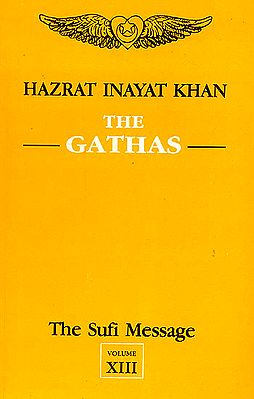 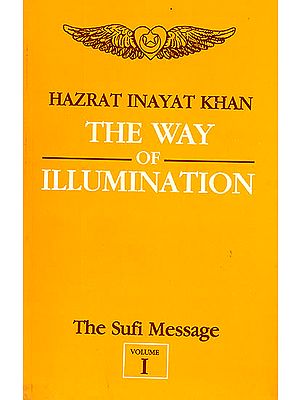 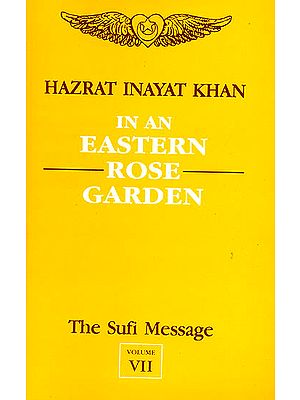 In An Eastern Rose Garden (Vol-VII, The Sufi Message)
By Hazrat Inayat Khan
$35.00 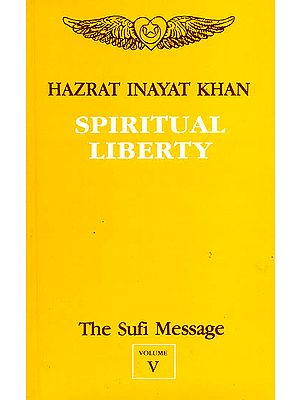 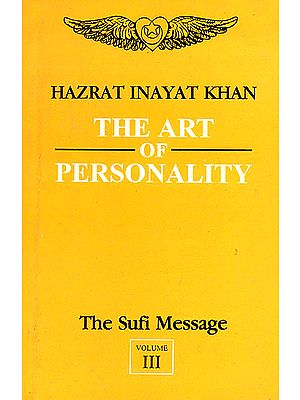 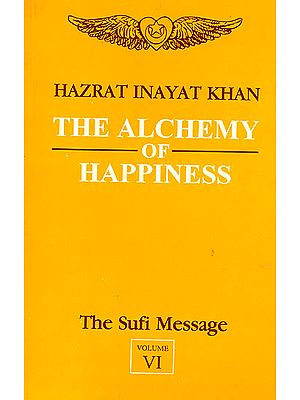 The Alchemy of Happiness (Vol-VI, The Sufi Message)
By Hazrat Inayat Khan
$21.00

The Perfect Master – The Way of the Sufi: Talks on Sufi Stories by Osho
Publisher A Full Circle Book
$23.50