The Place of Srivaishnava Community in Karnatic Music

Dr. V. S. Sampathkumaracharya (1925) was born in a Samavedic Chandogyam family of Swayamacharyas in Venkatayyana Chatra Agrahar, Chamarajanagar taluk of erstwhile Mysore District, Karnataka. He had a brilliant academic career: B.A. (Hons) of the Mysore University, M.A. of Banaras Hindu University (1961), B.Ed. (161) and Ph.D. (1973-74) of the Mysore University for his Doctoral Thesis life in the Hoysala Age (1000-1340 A.D.). He is also a Hindu Rashtrabhasha Visarad.

Dr. Acharya served with distinction in various educational institutions as teacher, lecturer and professor before his retirement in 1981. A doyen among Karnatic Musicologists, music came to him as a craving of the soul as it were, by listening to Samavedic Singing in his house and form hearing his aunts in his childhood. Later, he came under the influences of the late Sangeetha Bhushana M.A. Narasimhachar and also of Sangeethakala Sagara Prof. V. Ramaratnam. Gifted by nature with profound insights, Dr. Acharya made it to the higher echelons of musicology, with grace the ease. An erudite scholar in History, with creative insights, Dr. Acharya has authored many valuable works on Musicology, Musicians, History of Music and to cap it all, his seminal encyclo paedic work Karnataka Sangeetha Paribhashika Sadbakosa (1983-1986). Titles and honours have come to him all the way:

During early 1950 when I was a student of Engineering in National Institute of Engineering, Mysore, I was the recipient of enormous help from various people. Out of the 14 families who were feeding me in a week., 10 were sanketis, one of the Brahmin communities, well-known for music. Immediately after graduation, I moved out for employment and came back to Mysore and settled down, after having worked all over the country for 40 years. My one though was to discharge the enormous debt of gratitude to Sanketi community in a small way. I moved about interviewing 24 Sanketi musicians and collected photographs and other documents and wrote an article on Sanketi musicians’ contribution to Karnatic Music, My write up was published in ‘Sruti’, the premier monthly devoted to Indian Music and dance from Chennai in 1995.

The author of the present work Dr. V.S. Sampath Kumaracharya congratulated me on my write up on Sanketis, I immediately requested him to write a book on the enormous contributions of Srivaishnavas to Karnatic music over millennium, as he is eminently qualified to do as a Historian, musicologist and author of several works. He readily agreed, but because of certain circumstances, he could not take up the assignment immediately. I am happy he could do so now.

Similarly, I proposed the theme to friends of various other communities to write a book on the contributions musicians form their communities as it would serve the dual purpose of documenting what we generally tend to forget over a period of time and to serve as source of pride and inspiration to the coming generation. My pressure was probably insufficient as it has not borne fruit so far. But as an eternal optimist my hopes are alive.

In the present work, Dr. Acharya has given us in the form of the compact first chapter describing the development of Srivaishnavism in our country, its Principles and practices, the famous Alvars and Acharyas it has produced over these hundreds of years, their contribution to music. Literature etc. especially, for modern day readers who have no working knowledge of Sanskrit. This will be a very useful source in English. Himself being a historian, he has neatly written the matter in chronological order both the preceptors and musicians down to the present day. I hope the adherents of music will keep the good work continued in the coming days also.

I am also happy that he has added a section on Harikatha exponents. Harikatha or Hari Keertana–audio visual delights where the exponent amalgamates stories from several sources, anecdotes, dialogues, music, delivery, subtle humour etc. In short–Ekapatra Abhinaya–aimed to teach ethics through stories. Many ragas of music have been brought into currency by these vidwans and have stayed in Karnatic music by their sheer ‘Ranjakata’ or their capacity to please the listener.

The book deals with Sri Vaishnava community. Concentrated in Tamil Nadu, and parts of contiguons areas of Karnataka, Andhra Pradesh, Kerala. It can serve as a source book on Indian Music, both Karnatic and Hindustani, valuable to research scholars.

I have great pleasure in commending this invaluable book to musicians, musicologists, music students and music lovers.

The history of South Indian–Karnatic classical music is replete with many examples of some communities, which have contributed immensely to its development and propagation. Among the Hindus of India, the Brahmins constitute a very minor community. Among them the Srivaishnavas are a microscopic community. This community is generally called Iyengars. It has played an important role in world of music and allied arts of all these centuries. It stands next to Iyer community in this respect. Formerly, this community was mostly confined to Tamil Nadu, Karnataka and Andhra and some other parts of South India. But now, they are to be found through out India and in some western countries such as US and USA. From Tamil Nadu, they went to other parts of India in search of green pastures. During the last 3-4-centuries this community has richly contributed by virtue of its vocalists, instrumentalists, composers, teachers and writers.

South India, in the course of centuries, made signal contributions to the theory and practice of religion and to philosophic thought in its various aspects. It amply repaid the debt, it owed to the North in the sphere of religion and in all matters of spiritual culture. Its saints and seers evolved a new type of bhakti-devotion, a fervid emotional surrender to God. It was bhakti very different from the calm, dignified devotion of the Bhagavatas of the early centuries. Form South India there arose two schools of Mimamsa–that of Kumarila Bhatta and Prabhakara. The founders of the three main systems of Vedanta–Sankaracharya, Ramanujacharya and Madhvacharya–hailed from South India. Tamil Nadu also found its exponents of the Saiva Siddhanta. The Vedas were commented upon more than once in South India.

A little later than the 5th century AD, people, particularly in the Tamil Country began to entertain fears of the whole land and going over to Jainism and Buddhism. The worshippers of Siva and Vishnu felt the need to stem the rising tide of heresy. The growth of an intense emotional bhakti to siva and Vishnu are the chief characteristics of the new epoch. Devotees under the guidance of gifted gurus, traversed the country many times singing, dancing and debating. This movement attained its peak in the early seventh century through the 11-16th centuries.

The Bhakti school goes back to Vedic beginnings, reaching back to the Upanishads. Bhakti or devotion consists in the worship of a personal God, the creator and Lord of the Universe, culminating in total surrender to him. This is the best way and the only way, to the attainment of Salvation or release from the ever- recurring cycle of births and deaths.

In Tamil Nadu, the vaishnava as well as the saiva saints called Alvars and Nayanmars, were the main springs of the Bhakti movement. The saints and seers adopted the local language and used it as the medium of song in their mission. They were pilgrims all the time, moving among the people. They came from all classes and strata of society. They declaimed against hypocracy, corruption, empty forms and rituals. They pleaded for sincerity of faith and fellowship of beings and integration of the whole man. These minstrels of God, kept up the morale of the people and preached the superiority of spiritual values to mundane pursuits. They revitalized devotion and faith of the classes and the masses. The period between the sixth and 16th centuries glows with the ecstacies of devotional poetry.

The vaishnava branch of the Bhakti movement is represented by Twelve Alvars and several acharyas. The Alvars are so called because they were immersed in God–love and Godbliss. Details of their birth and lives are not available, as in the case with saints every where. It is difficult to separate history from legend. There are many anecdotes about them. However, it seems to be clear that their lives were extraordinary in keeping with the exalted position they have occupied in the minds and hearts of thousands of scholars and millions and millions of laymen alike. Their utterances reflect supreme heights of depth of knowledge. Wisdom, devotional fervor and mysticism.

There are considerable differences with regard to the period of the Alvars. Tradition places them centuries before Christ, in the Period after the passing away of Sri Krishna in 3031 BC. Among the Alwars there is Goda a called Andal, the only lady saint. They belonged to all grades of society, high and low. They came from different castes and classes. Social accidents of birth etc. never formed an obstacle to their elevation to saint hood. The door of ‘Love to God’ was open to all whose only qualification is their heart open to God. It emphasizes the point that what is important is not birth, but noble traits a well as philosophical and spiritual accomplishments and excellence. That is why they and the Acharyas were also social reformers of great benefit to humanity. On the basis of inscriptional and literary evidences modern scholars place the Alvars between 2nd century A.D. and 9th Century A.D.

The Legacy of the Alvars:

The greatest legacy of the Alvars to humanity are the 24 compositions, comprising of 4000 hymns. Known as Nalayira (4000) Divya (divine, excellent, beautiful), Prabhandam (composition). Of the 4000 hymns, about three fourths are contributed by three Alvars–Nammalvar, Tirumangai Alvar and Perialvar. The largest individual composition is by Nammalvar running to 1102 hymns.

Many of the compositions are of the antadi type, a poetic device used by which anta, the last word or part of the word of a hymn, is the adi or the first word of the next hymn. This devise makes it easy to memorise and recite hymns, very important in an age when printing had not developed. It also helps the continuity of thought like the continuous flow of oil-taila dhara.

The 4000 hymns of Alvar are beautiful poetry, profound, intense and practical philosophy and religion with bhakti (loving devotion) and prapatti or Saranagati (total surrender) as the principal means of realization of the supreme. They elucidate the tenets of visistadvaita school of thought.

The hymns breathe mysticism of a very high order. They are described as both anubhava grantha-religion born out of direct inner experience and upadesha grantha of philosophy fit for instruction. In other words, the Divya Prabhandas are of much theoretical as well as practical interest and for this reason they are held in high reverence, especially since they are considered like the Vedas, to be revealed rather than composed and compiled in the ordinary way.

That is why the Divya Prabhandam is called Tamil Veda, having much in common and in some respects supplementing and elaborating, with the Vedic philosophy and religion, scholars of Alvars hymns are called Ubhaya Vedantis well versed in both (Ubhya) systems. 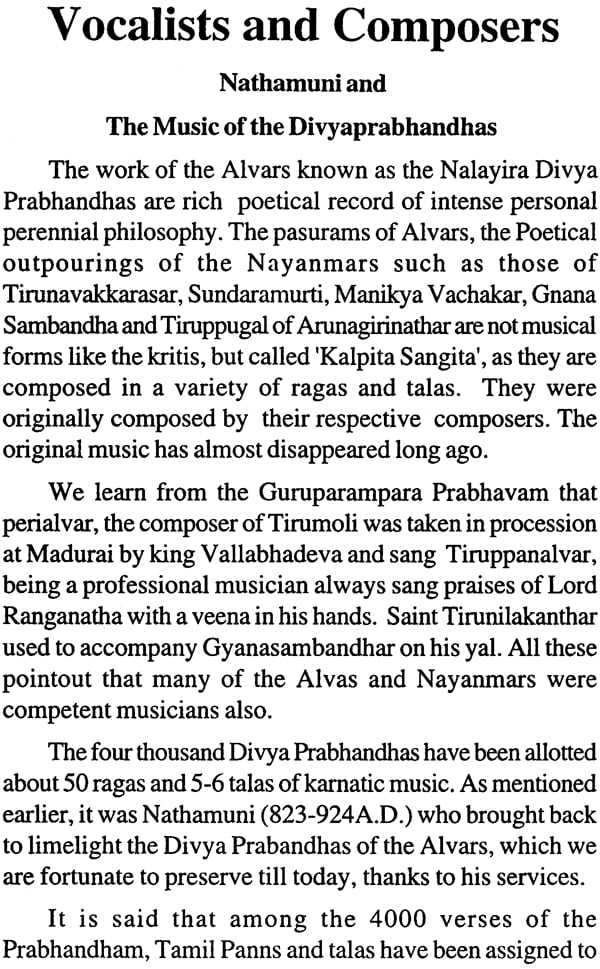 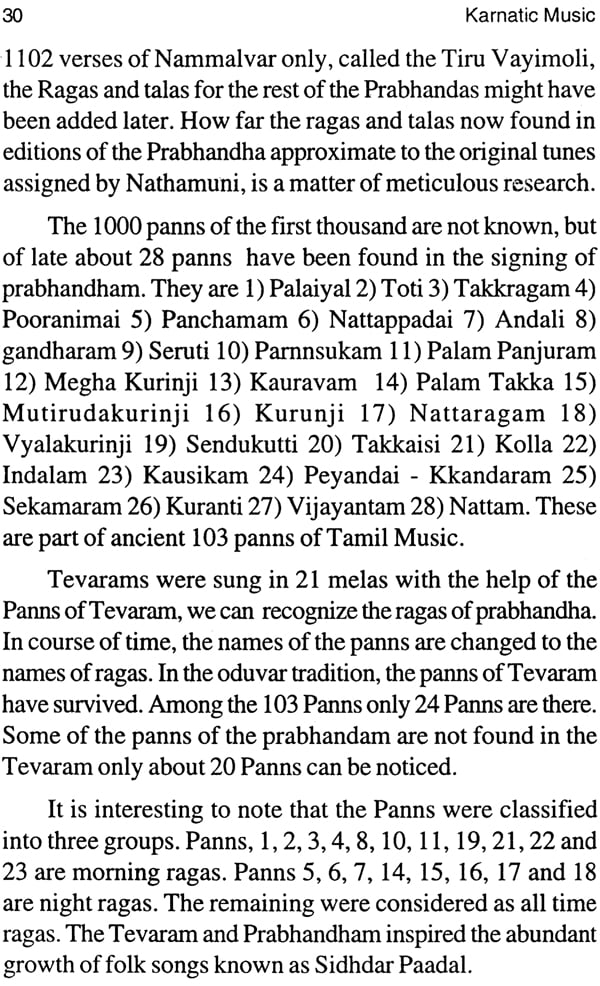 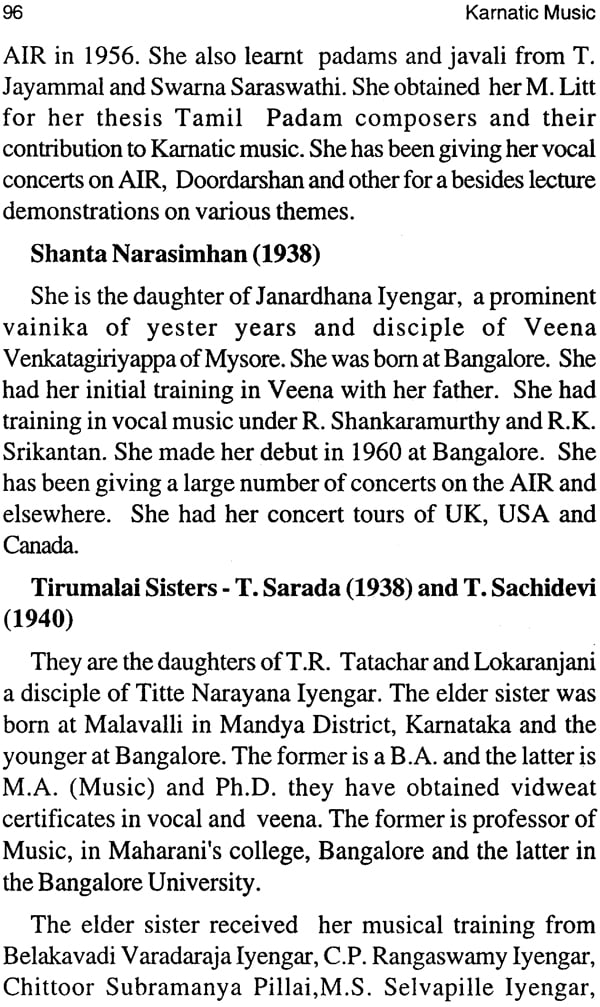 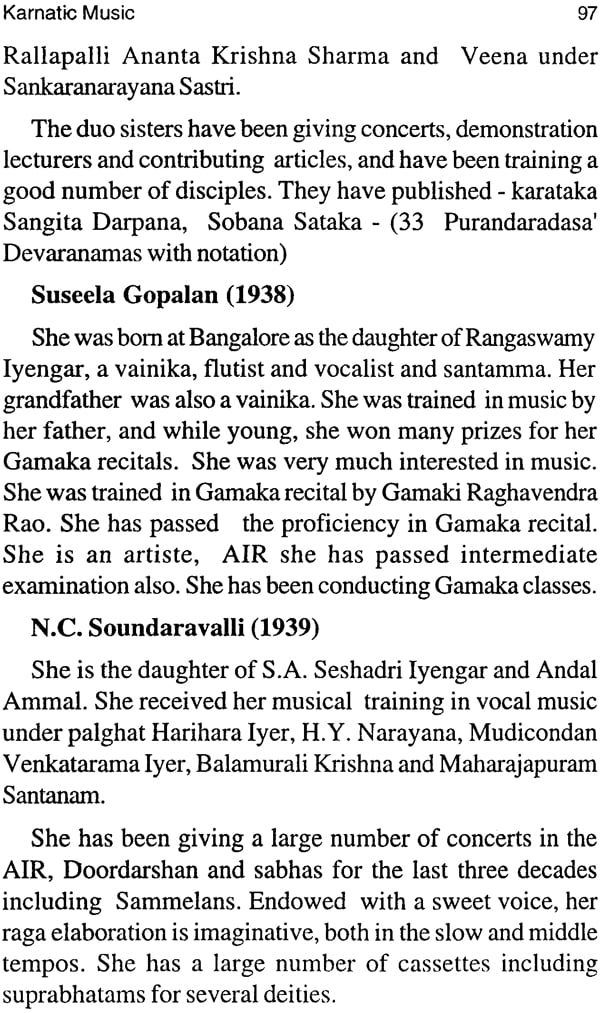 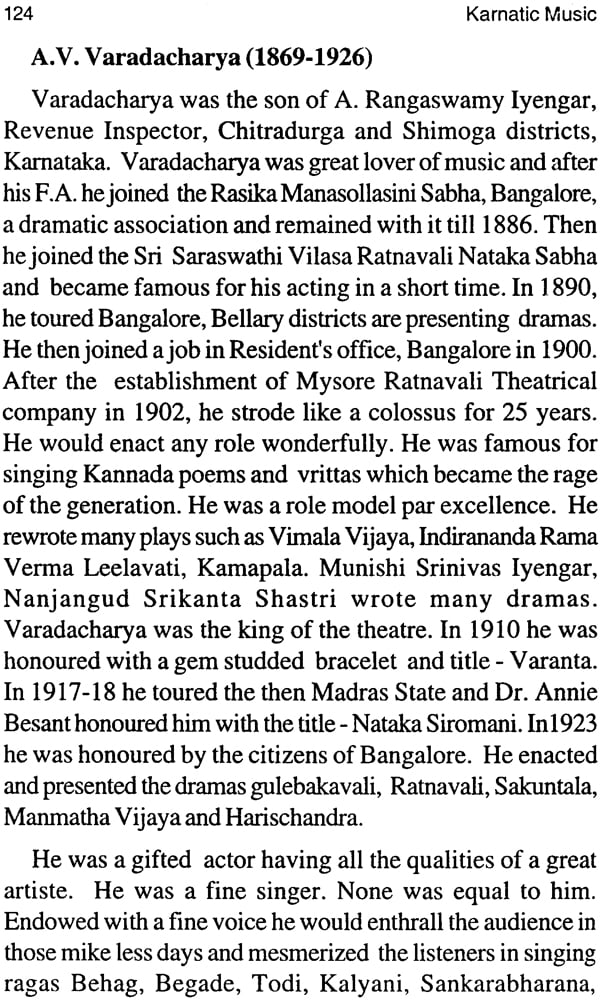 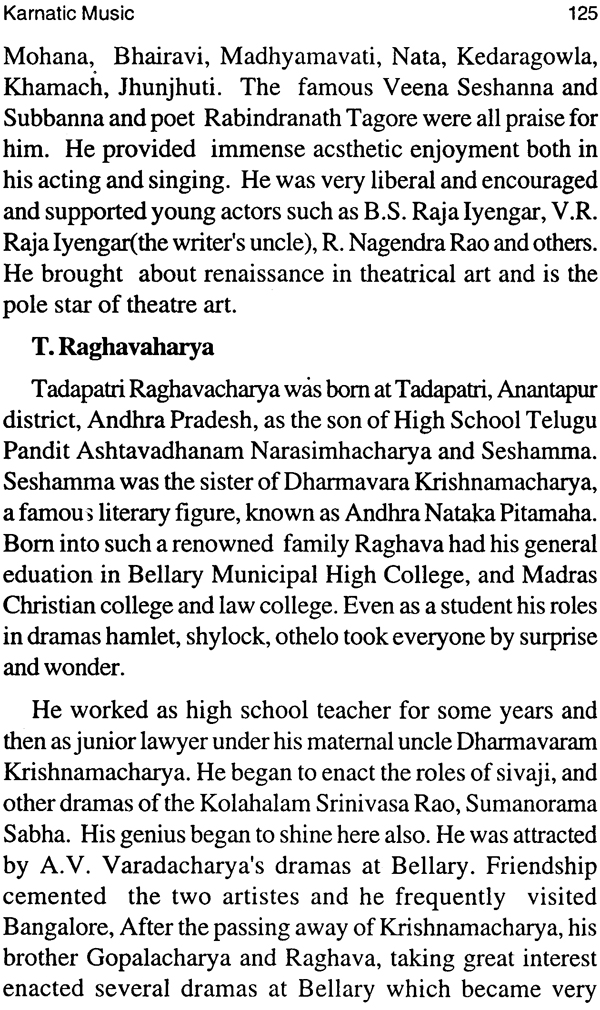 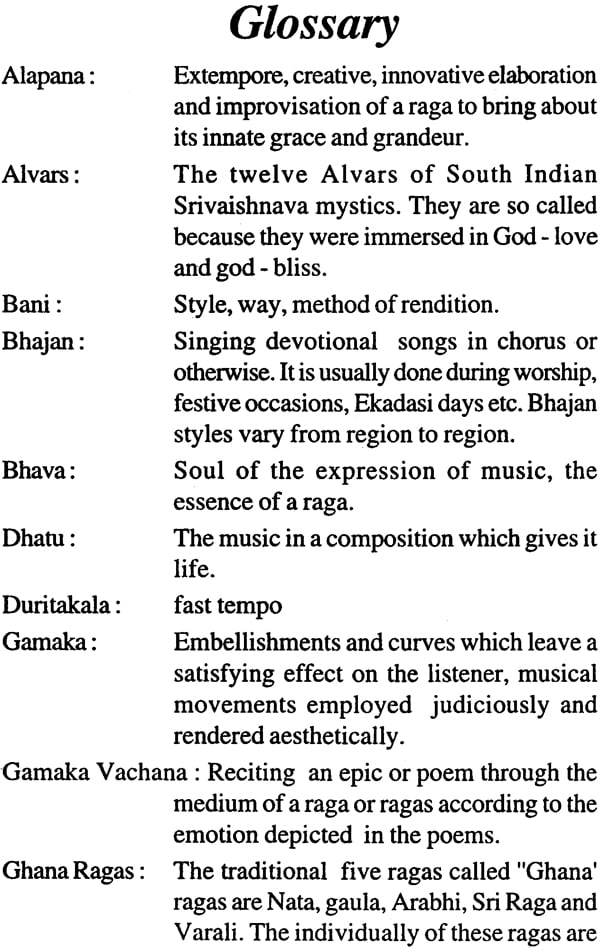 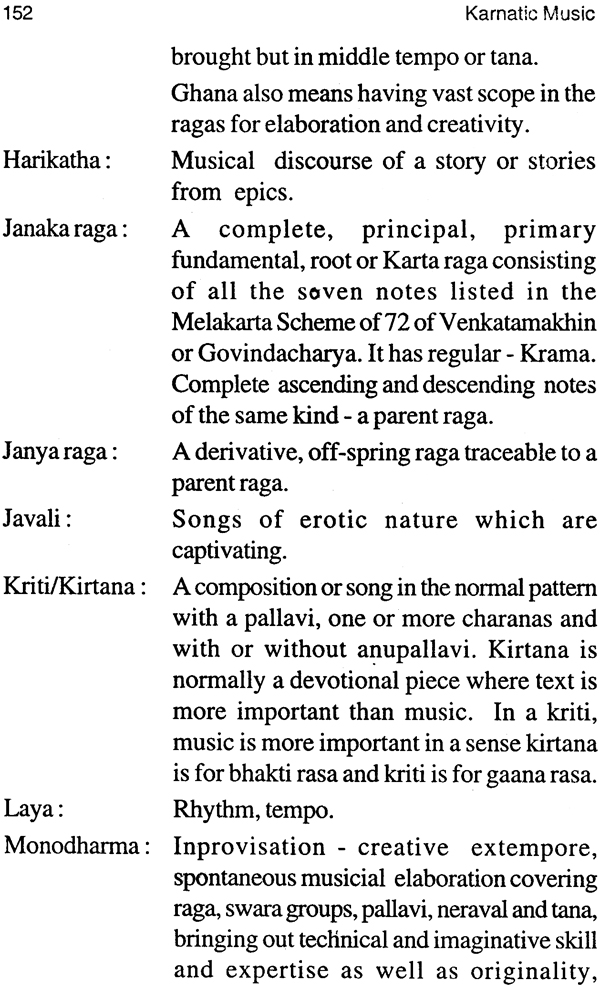 Vaishnava Harmonium (Based on the North Indian System of Music): Book 1 and 2 with Two CDs
By Ramanujacharya Das
$37.50
FREE Delivery
Best Seller The Darbhanga Tradition: Dhrupada in the School of Pandit Vidur Mallik
By Selina Thielemann
$37.50
FREE Delivery