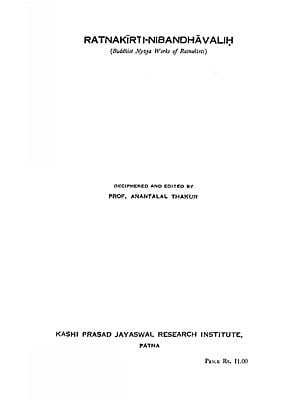 Fully insured
Preface
This third volume of the Tibetan Sanskrit Series on the Nibandhavali of Ratnakirti also deals with Buddhist philosophy which had become dovetailed with logic (Nyaya) at least since the time of Dharmasastra (c. 550 A.D.). The volumes of the series published so far will enable the reader to have a bird's eye view of the history and progress of logic and philosophy in Mahayana Buddhism for about five centuries, c. 550 to 1050 A.D. The Nyayabindu of Dharma-kirti included in Vol. II gives a glimpse of this school, as it was gathering momentum in the latter half of the 6th century; the Pramavavartikabhava of Prajakaragupta published in Vol. I and the Nyayabindutika of Dharmottara included in Vol. II enable the student to note its progress during the 8th century A.D. The beginning of the last phase of this school can be seen in the Dharmottarapradipa of Durveka Mira included in the Vol. II and the Nibandhavali of Ratnakirti being published in the present volume; for the authors of both these works flourished in the first half of the lath century. The Nibandhas of Jilanari, which are in the press, also belong to this stage.

These works enable us to visualize not only the history of the Mahayana Buddha school of logic and philosophy, but also reveal the conflict of mind with mind, ideas with ideas and philosophy with philosophy between the Buddhist and their Hindu opponents. The intellectual vigor of the age did not permit the procedure of regarding the opponents' system as unclean and untouchable; philosophers were not content till they had demolished to their best satisfaction the case and system of the opponent by the intellectual weapon. It is true that the discussion' was tending to become narrow and scholastic, as the theories of the ruktis and Hetvabhasas were being developed in the course of time. But this does not disprove the fact that the opposing schools were anxious to silence their opponents by appealing rather to the reason than to the authority.

Ratnakirti, the author of the present Nibandhavali flourished early in the 11th century at the famous University of Vikramagala. The present work will amply attest to the intellectual eminence of his scholarship and show how the scholars at Vikramawa continued their intellectual and philosophical work undisturbed, even when foreign armies were threatening to penetrate into the western frontiers of Bihar.

Both Ratnakirti and his preceptor Jilanari were famous scholars of the Vikramakila University, where the latter occupied the much coveted post of Dvarapanclita or controller of the admissions to the University. Both the preceptor and disciple were the senior contemporaries of Dipankara Stopana Away, who played so important a role in the spread of Buddhism in Tibet and the translations of the works of the faith in the language of that country. Ratnakirti did not visit Tibet, but his fame had spread to that country, where he was honored as one of the important luminaries of Buddhism.

It is usually believed that the ascendancy of the Vajrayana with its Tantric practices was one of the main causes responsible for the downfall of the Buddhism. The theory requires a thorough-going investigation. I have shown in my booklet on the Mantraiastra and Jainism how Jainism had its own Mantra6astra, teaching all sorts of magical and esoteric practices but having no room for meat, wine and women. It is quite likely that Buddhist Tantrasastra was for a long time a mere Mantrasastra, uncontaminated by any objectionable erotic rituals. Such probably was the case in the days of Asanga and Nagarjuna who are also associated with esoteric practices in later tradition. Padmasambhava is stated to have introduced the Sakta element in the Mantrasastra in the 8th century. But even when this, took place Mantrasastra or pure Tantrasastra and Sakta Tantrasastra appear to have co-existed side by side for a long time. Ratnakirti, the author of the present Nibandha'vali was a practicing Tantric. The Tibetan monk of the 13th century, Chug Latasha Chosrjedpa, Translator Dharmasvamin, who visited Bihar during 1234-6 A. D., was also a Tantric adept in Matjclalas and esoteric practices. But neither the biography of the Tibetan monk, which we shall not soon publish, nor the works of Ratnakirti, which are being published in this work, show that either of them was the follower of the Saktika practices. We may perhaps criticize the tracts of Ratnakirti as too scholastic or formal, or as relying too much on logical technicalities for proving or disproving a point; but they do not countenance the Varnamarga.

The belief in the possibility of the attainment of self-realization or magical powers by esoteric Mantras and practices was very old in India, shared alike by Hinduism, Buddhism and Jainism. This represented the early or pure aspect of the Mantra6astra; it was later contaminated by the introduction of the erotic element and then became the Tantrasastra. Perhaps further researches and discoveries will show that pure Tantric religion existed side by side with the Sakta Tantric religion, uninfluenced by the Varnamarga rituals, for several centuries. The impression left by the Nibandhas of Ratnakirti tends to show that he was a Tantric of the first variety.

Introduction
The MS material and short Account of the Works edited

The discovery by Mahapariculta Ralula Sankrtyayana of a large number of palm-leaf manuscripts of numerous Sanskrit works in different monasteries in Tibet is one of the greatest achievements of Indian scholarship of the present century. The photographic copies of these manuscripts brought by him have opened up new vistas of enquiry. Most of these ancient works were thought to be long lost and quotations and references in current texts were all that one knew about them. in some cases however, very faith-full Tibetan translations were available. But a translation has its inherent limitations and can never replace the original. Thus the want of many works of Asafiga, Vasubandhu, Digndga, Dharmakirti, Prajilakara, Jfidnari-mitra and Ratnakirti among others in original Sanskrit was keenly felt by the students of Indian Philosophy. Now, thanks to the Mahapar.iclita's energetic and arduous searches, many works of these and other philosophers have come within easy reach of the world of scholars and it is particularly encouraging to note that the present custodians of these treasures are ready to help bonafide scholars in all possible ways to study them. Consequently a number of important works have already been edited and published and a good many are being made ready for publication.

The works of Jilanarimitra and Ratnakirti preserved in this collection were of special interest to the writer of this introduction and the present volume is the result of his studies in one batch of photo prints which were provisionally called the Ratnakirtinibandhana by the learned discoverer and collector. The original bundle of MSS on which the photo-prints are based is preserved in the Salu monastery' in Tibet. it consists of eighty-six folia written in clear Maithili script of circa 1200 A. D. There are six lines of about 130 syllables on each side of a folio. The bundle consists of the MSS of the following twelve works: -

Dr. Haraprasada Sastrin and published in the Bibliotheca Indica Series under the title Six Buddhist Nyaya Tracts (Cal. 1911)1. No manuscript of the other seven works has been noticed elsewhere. The present volume contains only the works of Ratnakirti found in the above mentioned collection and is therefore named Ratnakirtinibandhavali. The three tracts published in the Bibliotheca Indica Series which are long out of print have also been included in the present volume where the readings have been selected on a comparison of our MS with the printed edition.' In the case of the remaining works, however, we had to depend upon the single MS and the quotations in other Works wherever traceable.

The manuscripts are not free from errors committed by the copyist. An honest attempt has been made to get a tolerably correct text as far as possible on the basis of the available material. Unfortunately there are no Tibetan translations of these texts to verify the readings. The order, in which the tracts occur in the MS, though not chromo-logical or based on any known principle, has been followed in this edition as no rearrangement could be considered satisfactory in the present state of our knowledge. There are some other defects too. We have however, the sates-faction of bringing together in one volume all the available logical works of Ratnakirti.

The works may be classified into three groups: 1 Works refuting the views of the opponents:

(a) The ivarasadhana dharma refutes the existence of God as propounded by the Nayayikas.

(b) The Shrisiddhidafaria criticizes the existence of permanent entities.

(c) The Santanantaradama demolishes the theory of the possibility of the existence of other people's minds. 2. Works expounding various Buddhist doctrines:

(a) The Sarvajnasiddhi proves the existence of the omniscient being.

(b) The Apohasiddhi expounds the Buddhist theory on the meaning of words.' 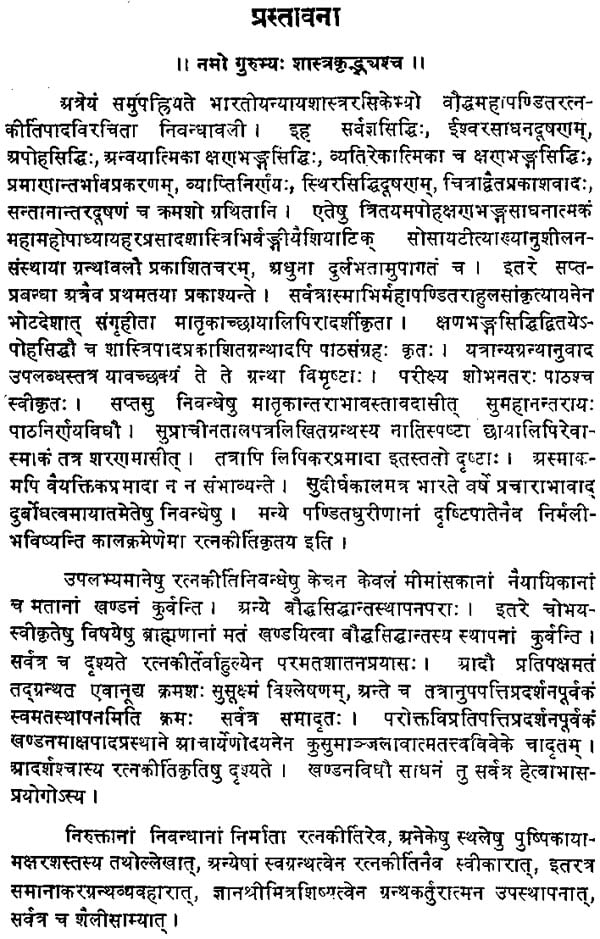 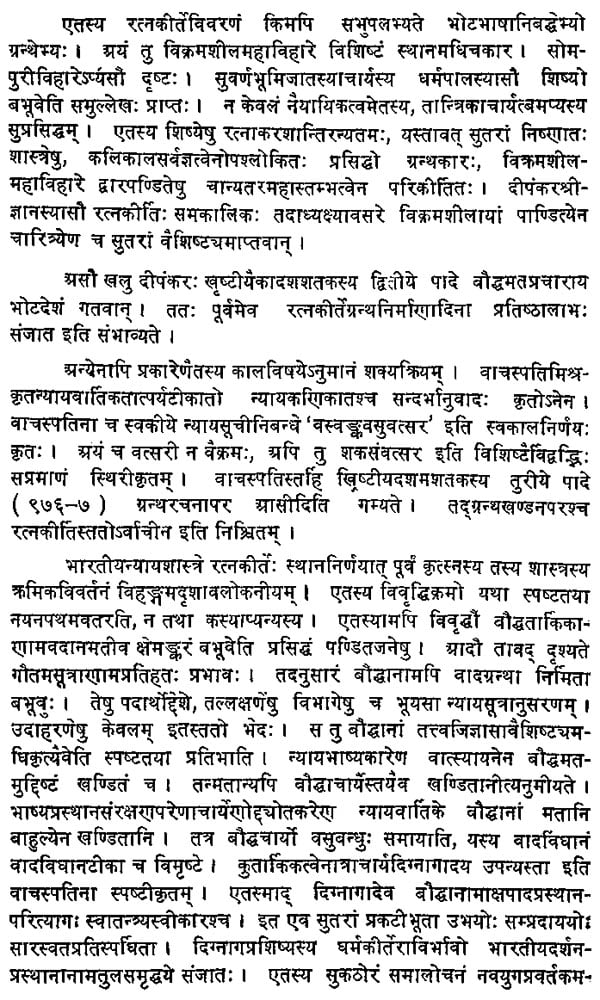 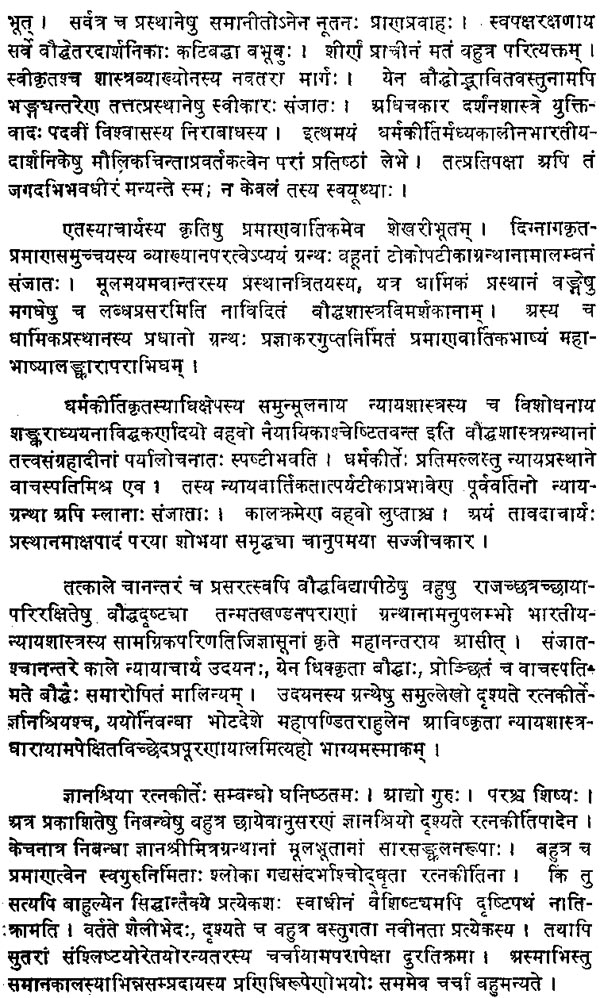 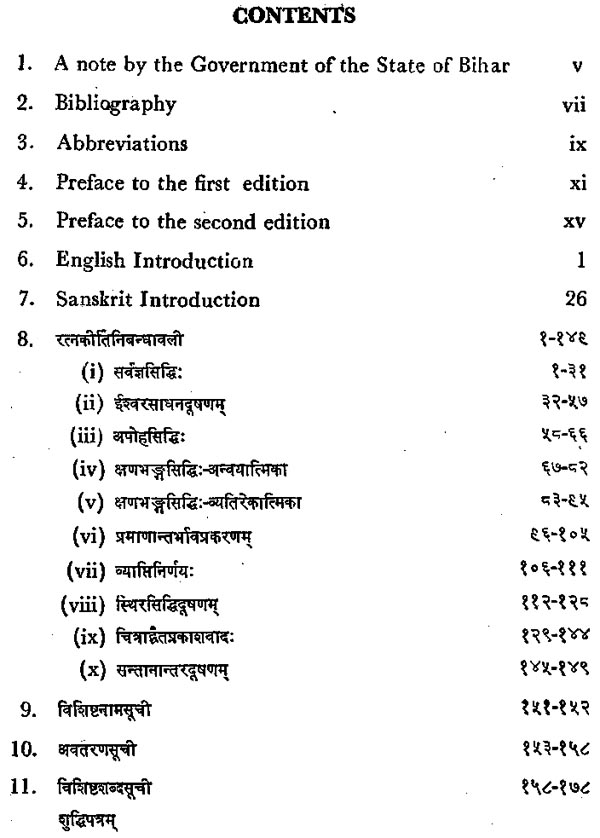 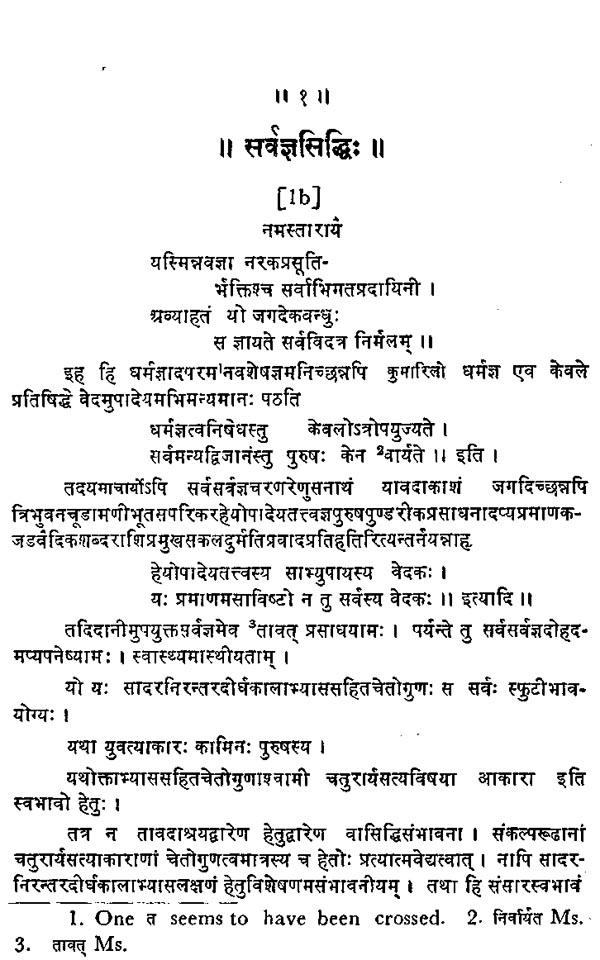 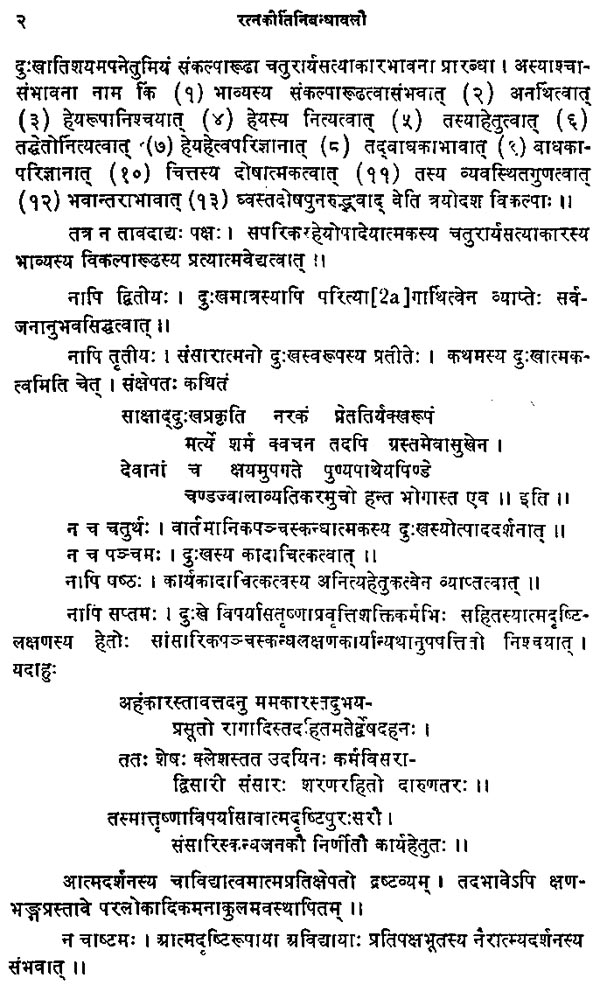 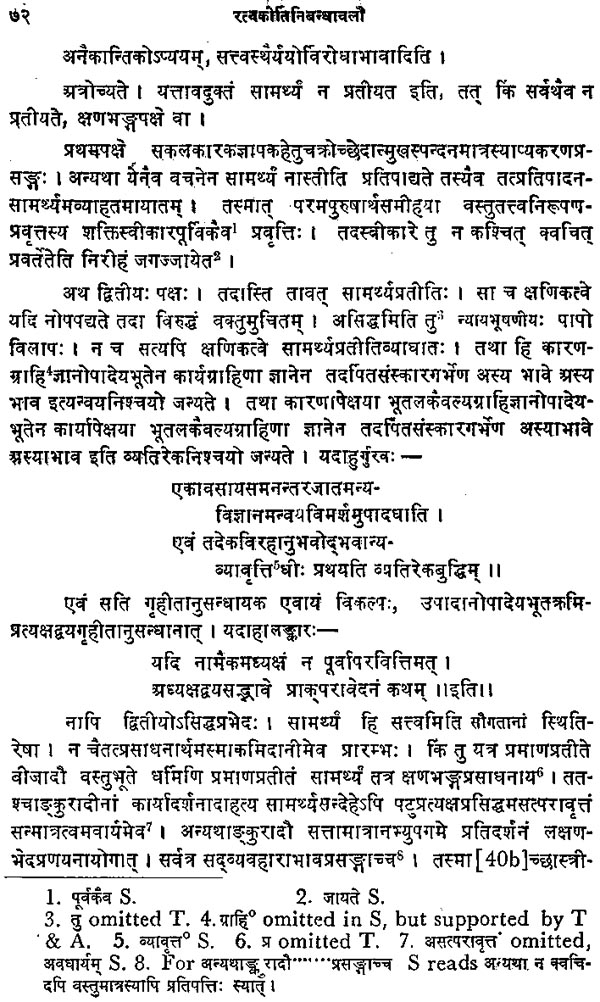 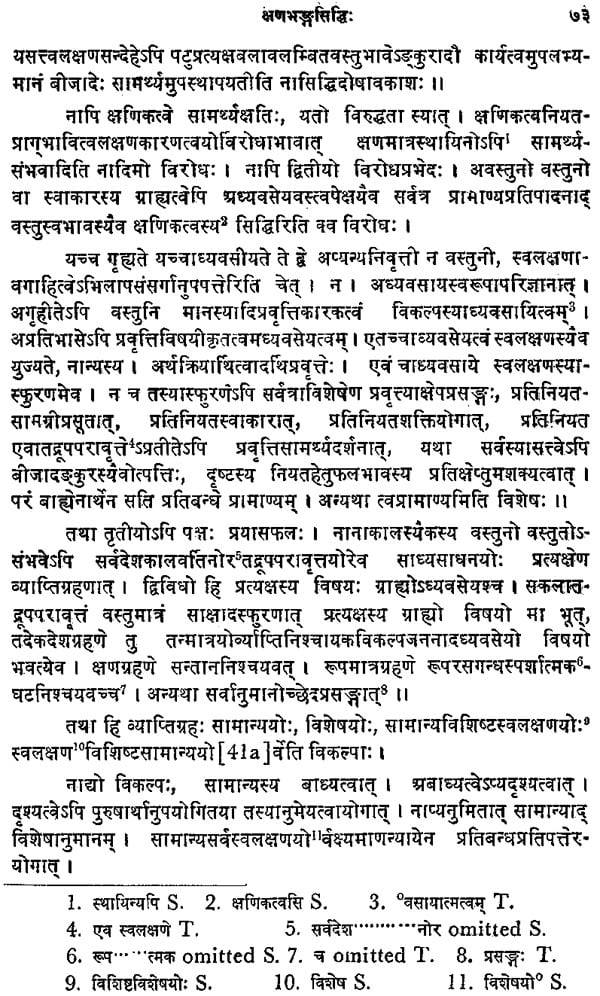 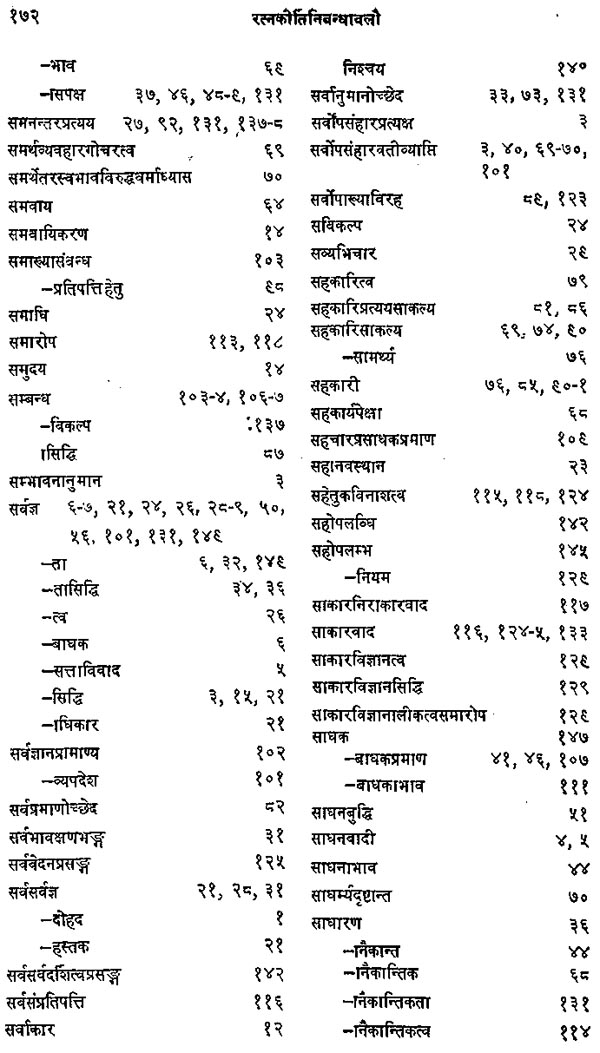 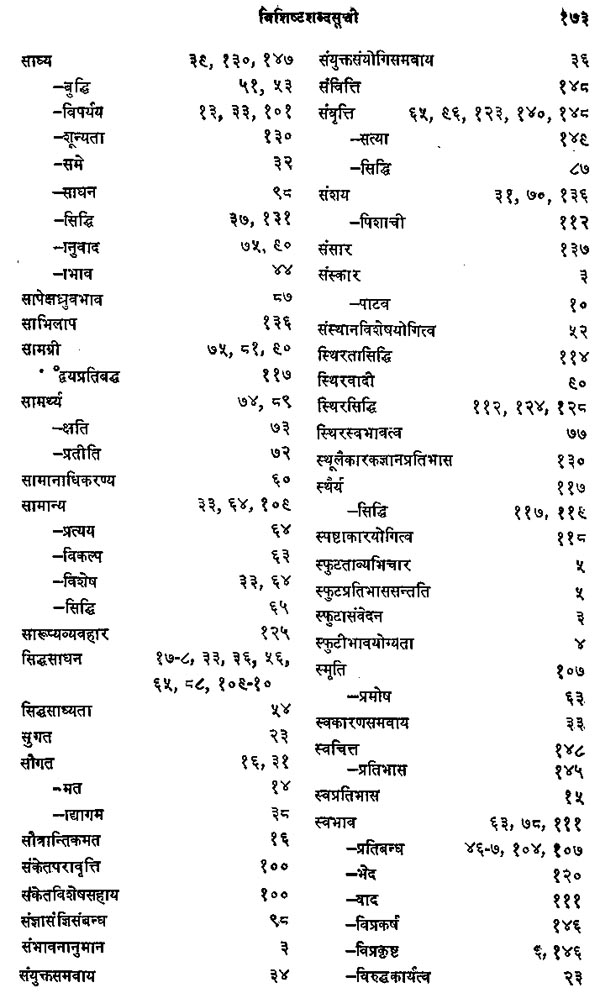 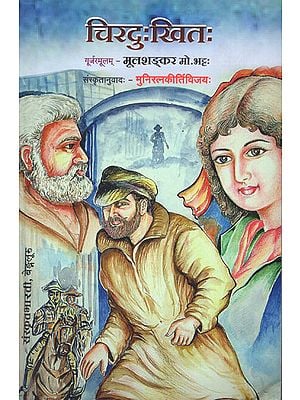