Relation as Real: A Critique of Dharmakirti

The book ‘Relation as Real: A Critique of Dharmakirti’ is the result of intensive and critical study on the arguments forwarded by Dharmakirti on the unreality of Relation in his book Sambandhapariksa. Apart from his metaphysical commitments to the Buddhist Logic and Epistemology Dharmakirti had developed some independent arguments given from the common sense level in favour of denying ‘Relation’. So far no philosopher belonging to Nyaya school has come forward to refute or critically evaluate the arguments given by Dharmakirti. An effort has been made to refute and evaluate Dharmkirti’s view by way of showing some philosophical problems and paradoxes in his theories. Ultimately it has been shown that Relation has to be accepted as belonging to the category of Real and a reconstruction is suggested in Dharmakirti’s theory to accomodate such an idea.

Raghunath Ghosh, Professor of Philosophy, University of North Bengal, Darjeeling, W. B. India, is specialised in Navya Nyaya system of Logic, Indian Philosophy and Modern Indian Philosophy. Apart from his University education Ghosh has received training in a traditional way for a considerable period of time. He has published three books, twenty research papers in Edited Volumes and sixty papers in different professional journals. Ghosh has widely traveled and lectured in different Universities in Netherlands (under Indo-Netherlands Cultural Exchange Programme), France, England, Japan, Germany, U.S.A., Poland and Finland (under Indo-Finnish Cultural Exchange Programme) apart from Bangladesh and India and researched with Professor Kuno Lorenz, University of Saarland (Germany) under the auspices of DAAD Fellowship. He taught Philosophy at NEHU, Shillong and was a Visiting Fellow in the Department of Philosophy, University of Poona and in the Department of Sanskrit, Jadavpur University, Calcutta.

The present work entitled ‘Relation as Real: A Critique of Dharmakirti’ is an attempt to criticise Dharmakirti who has denied the reality of relation with some beautiful arguments in his book ‘Samb andhapariks a, An effort has been made to give an account of the Navya Nyaya concept of Relation and elucidate Dharmakirti’s arguments which are refuted from the Navya Nyaya standpoint and by way of doing this I have tried to prove the reality of Relation. In this connection some paradoxes and inconsistencies in Dharmakirti’s epistemology have been shown and their probable solutions have been suggested from the Navya Nyaya point of view. Many contemporary scholars had made an attempt to solve the Buddhist epistemological paradoxes and inconsistencies, which, I think, is in vain. The views of such scholars are not also tenable in the eye of logic as their solutions had not really dissolved the problem. In the concluding part of the book I have suggested a reconstruction of the Dharmakirti’s view. If this reconstruction is accepted then the probable inconsistencies and paradoxes can easily be removed.

A portion of this work was presented in the Third International Dharmakirti Conference held at Hiroshima University, Japan in 1997 and at King’s College, University of London, UK in 1996. I have completed the whole work under the supervision of Professor Kuno Lorenz, Department of Philosophy, University of Saarland, Sarbrucken (Germany) under the auspices of DAAD (German Academic Exchange Service) fellowship in 1998. Professor P.D. Narahari Rao of the same University has helped in various ways after giving the final shape of the book in Germany. I am very much grateful to all of them for their kind help in commenting on my papers and supervising my work.

My learned colleagues of my department, University of North Bengal, have thrown much light on this work and hence I am very much thankful to them. I am indebted to my friends of the University of Pune-Professor Pradip Gokhale, Prof. Sarad Deshpande, Dr. (Miss) Mangla Chinchore, Professor Baliram Sukla etc for their kind suggestions when I presented the main findings of this project as a Visiting Fellow in the Department in 1999. At last I would like to thank to Mr. Sunil Gupta, Sri Satguru Publications, Delhi for undertaking this book for publication and bringing it to the scholars of the world.

Other than the Buddhists all the systems of Indian philosophy accept ‘relation’ as an existent category. For, all the systems of Indian philosophy admit that without relation day to day behaviour through language is not at all possible. At least the philosophers have to admit the signifier and signified relationship (vacyavacakabh ava-samhandha) between a word and its meaning on which the whole phenomenon of expression in favour of someone’s own standpoint and against others depends. That is why, sambandha or relation has occupied a prominent role in day to day behaviour in general and philosophical expression in particular. Relation is an instrument to the expression of certain thought required to build a particular system. After tenth century the scholars have to formulate some technical terms and peculiar or uncommon or novel relations to express particular logical and epistemological problems. In fact, after tenth century some peculiar terms, techniques and relational notions were developed spontaneously to express certain facts by the intellectuals coming from different branches of Sanskritic study viz, Rasagangadhara of Jagannatha, Advaitasiddhi of Madhusudana Sarasvati, Vedantaparibhasa of Dharmaraja Adhvarindra, the commentaries like Sikhamani and Maniprabha apart from the texts of Navy a Nyaya like Tattvacintamani of Gangesa, Didhiti of Raghunatha etc. In fact, these techniques and relations became the media of philosophising in a sophisticated way during this time. The Navya Naiyayikas are said to be pioneer in using this sophisticated technical language to express precisely what they want to mean. They believe that there is no other way than to adopt these for expressing the logical points precisely and accurately. Following the line of the Navya Naiyayikas the scholars of other schools have adopted this technique and technical terms for the sake of philosophical or logical clarity. Sometimes the scholars of Dvaitavada school like the author of Tarkatandavam etc emerging after Gangesa have taken the help of such language to refute the views of the opponents (Purvapaksa) like Gangesa etc. To cope with such language peculiar types of relation are used by the logicians for the sake of accurate express ion of their thought.

So far we have seen the necessity of relation in verbal communication or expression. Now we would like to give some logical illuminations of some novel types of relations accepted in Navya Nyaya. After pondering over the importance of relation the philosophers of a particular school may be convinced that in any case ‘relation’ has to be accepted as real. Inspite of this they may wander how some peculiar relations like tadatmya (identity), svarupa, (self- linking relation), paryapti etc have been accepted in Navya Nyaya and may think that these notions have made the logical procedure more complicated. It is generally alleged that the Navya Naiyayikas have complicated theories when they offer a commentary in the name of pariskara (clarity). In the name of clarity some technical elements are generally introduced through which the general reader becomes puzzled and confused by seeing the instance of their so called ‘clarity’ which becomes more unclear than before. The introduction of certain relations with which we are unacquainted may become one of the causes of this.

For this reason an attempt has been made to give a logical justification of admitting some unique relations like tadatmya, svariipa etc. and by way of introductory notes to these I propose to prove the inevitability of relation in any philosophical discourse, not to speak of the Navya Nyaya only. 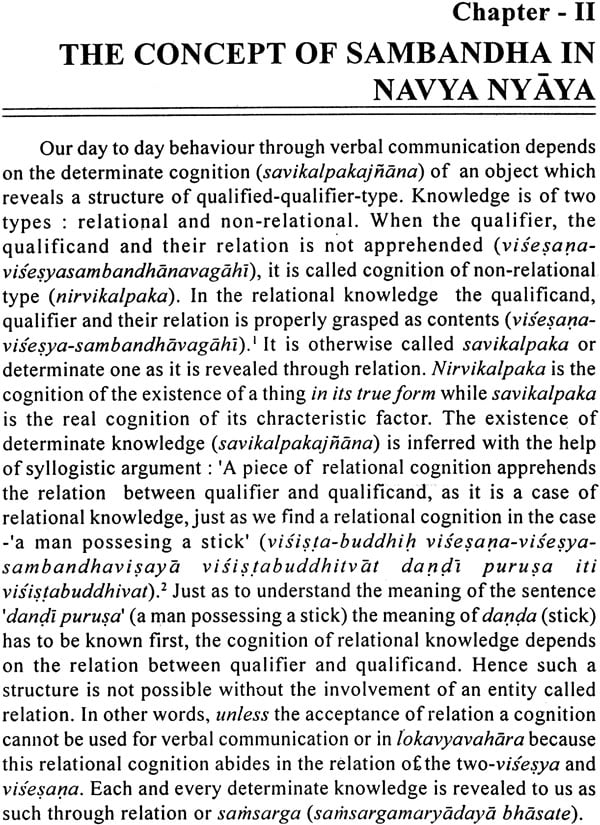 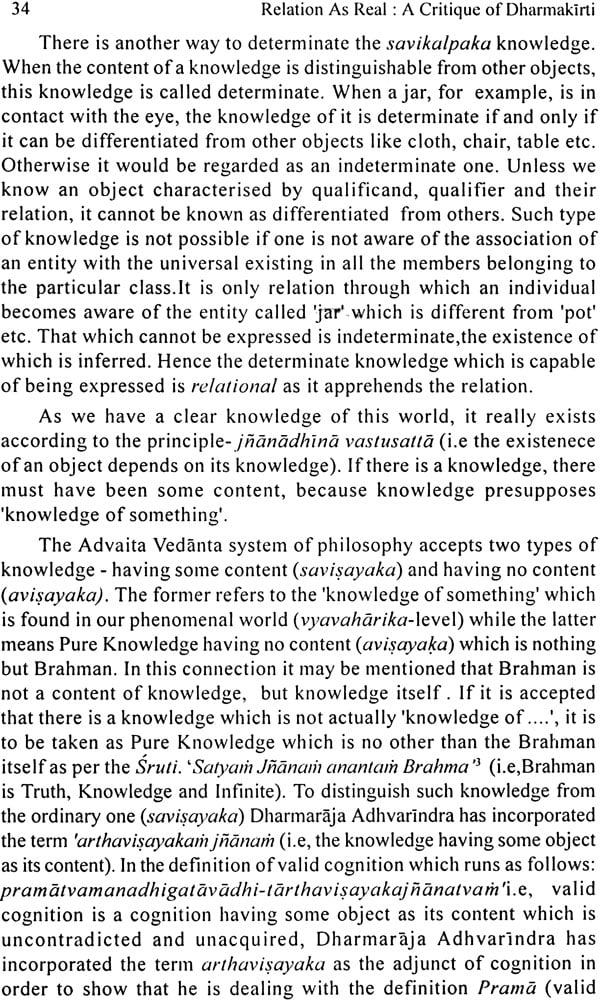 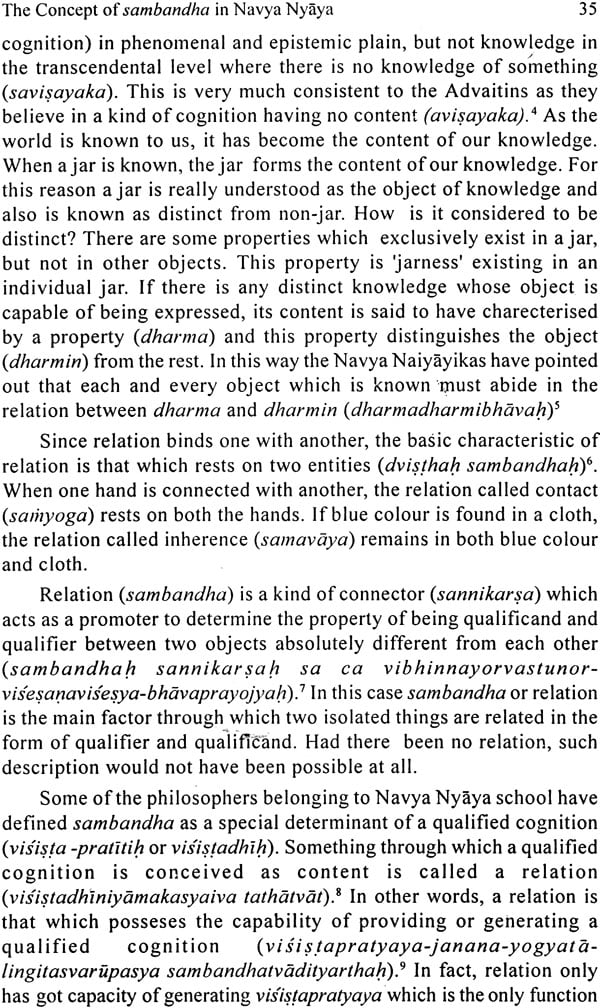 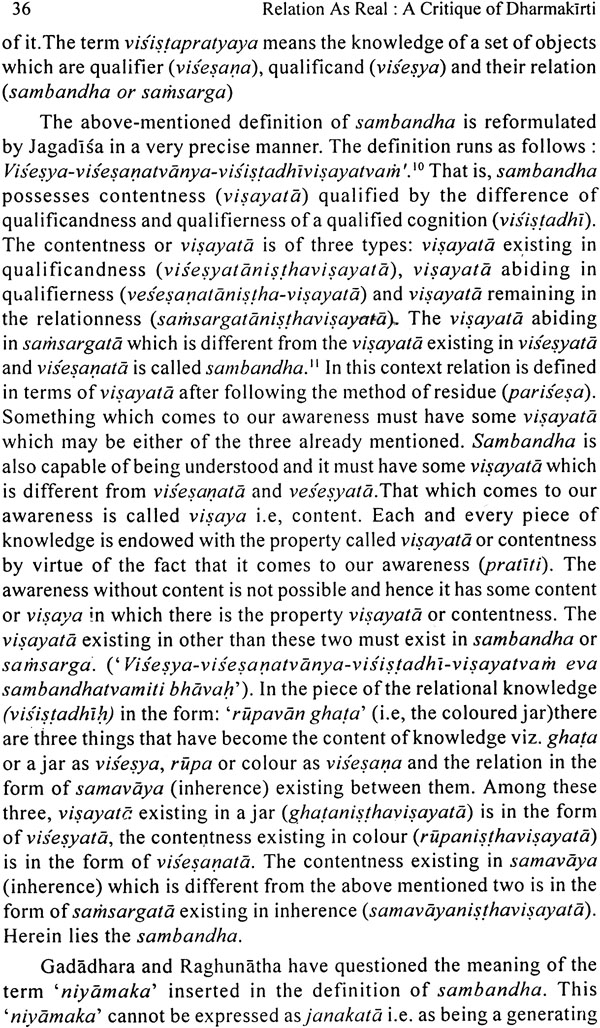 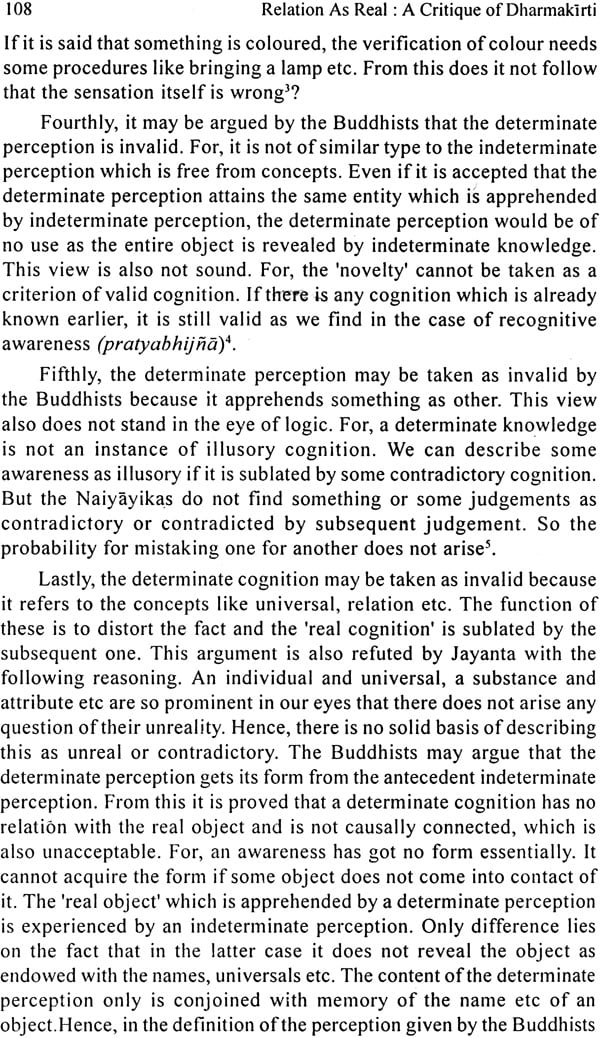 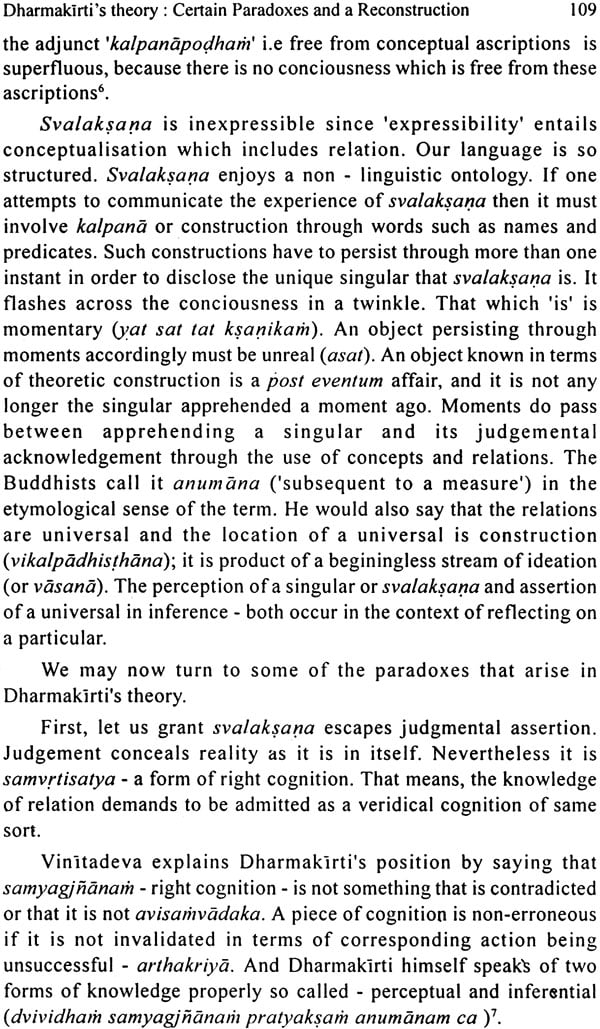 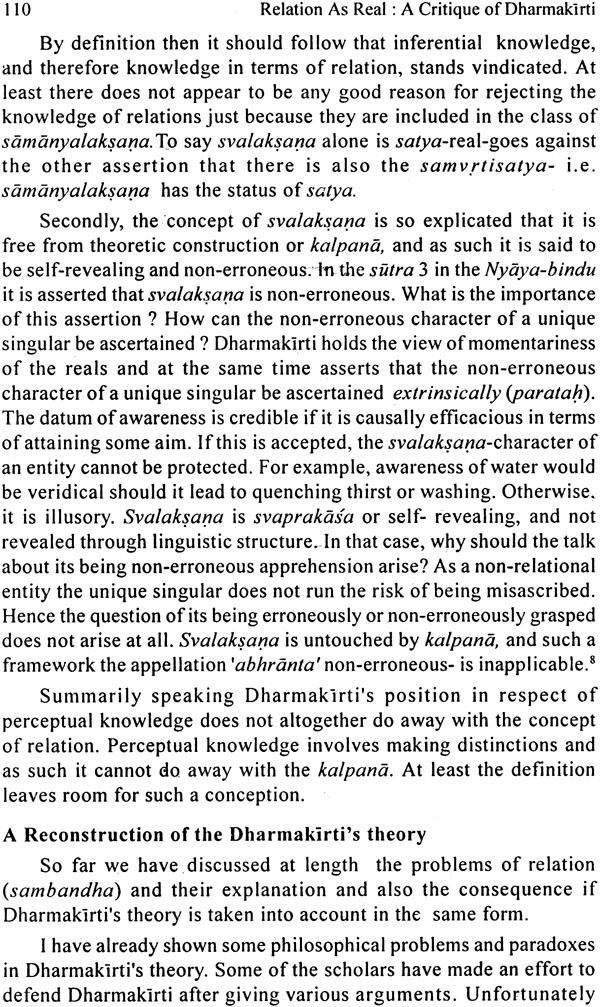 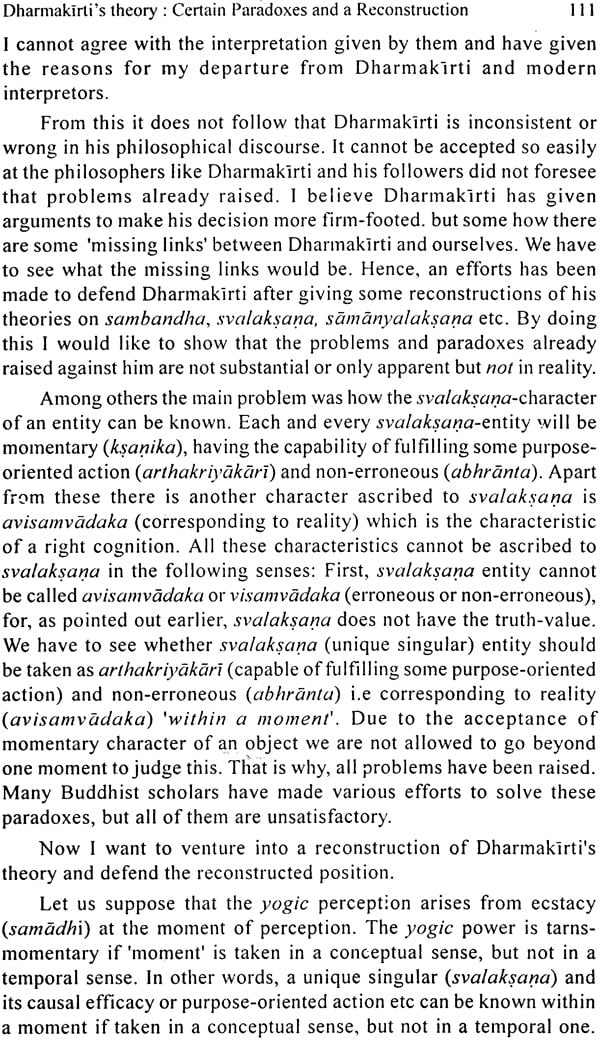 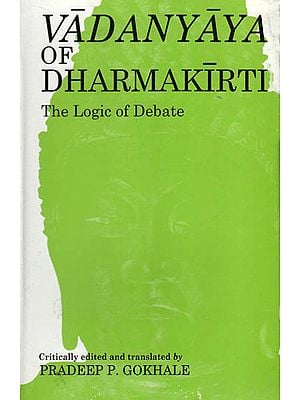 Vadanyaya of Dharmakirti - The Logic of Debate
By Pradeep P. Gokhale
$29
FREE Delivery

Hetubindu of Dharmakirti (A Point on Probans)
By P.P. Gokhale
$24.50
FREE Delivery

Santana and Santanantara (An Analysis of the Buddhist Perspective Concerning Continuity, Transformation and Transcendence and the Basis of an Alternative Philosophical Psychology)
By Mangala R. Chinchore
$39
FREE Delivery

Caste and Buddhist Philosophy (Continuity of Some Buddhist Arguments Against the Realist Interpretation of Social Denominations)
By Vincent Eltschinger
$22.50
FREE Delivery
$30  (25% off) 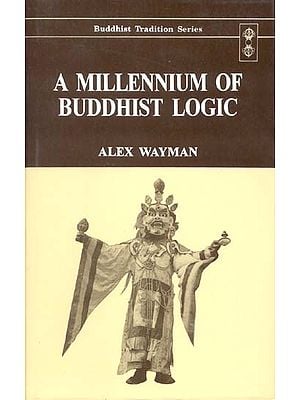 A MILLENNIUM OF BUDDHIST LOGIC
By Alex Wayman
$45
FREE Delivery 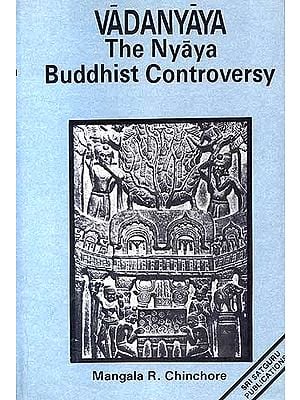