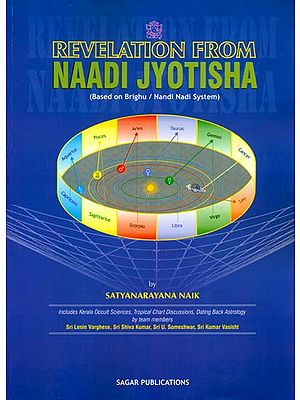 Revelation From Naadi Jyotisha (Based on Brighu/Nandi Nadi System)

The present work on the Naadi is unique in its presentation and it has many hitherto untold secrets of astronomy relating to astrology. Many astronomical mechanisms are set in astrological aphorisms to delineate material and metaphysical aspects of life. In this work the author has established every rule with practical examples enabling to grasp logic in application. Apart from giving detailed method to study the horoscope, many remedial measures are given to overcome inimical effects of planets. This book is divided into many sections catering the needs of novice to expert in the field of astrology. In the 2nd part of the book the author introduced the team efforts in the field of classical works and rare remedial measures. This book is a treasure of knowledge and worth a prime place in personal library.

We expect many more valuable writings from the author.

Sri Satyanaryana Naik needs no introduction to the astrological fraternity. He has to his credit several books in English and Telugu on Naadi and Krishnamurti paddathi. His works are research based and prefers not to deviate from Orientals. Retired as costing and planning manager in private industrial firms, Sri Naik users his managerial skills in presenting his astrological works in an organised manner using visuals and tables. He has sufficient knowledge in classical text like Parasara, Jaimini etc. He has exposure to arts, philosophy, astronomy and engineering fields which helped him in his astrological elucidation. His aim is to search for secrets from the classical works and make it as applicable tools in astrology. He teaches astrology in various institutions including the university at Hyderabad. To unveil the secrets from classical from various vernacular languages including Sanskrit he formed a team comprising of brilliant students for the research task. Many projects are under process with the team efforts. He leads a simple life with no attachment towards commercial aspects of life.

It is a proud privilege for us to be a part of this great work on Naadi Astrology. This work is like an epic because it is a reproduction of the experiments conducted at the workshops and classrooms. The concept of teaching was based on interactive method and every one of us was given equal opportunity to express doubts, experiment with new ideas and address the class with practical case studies.

The approach to the subject Naadi Astrology by Guruji is unique. With his metaphysical approach, he has proved the unification of macrocosm and microcosm. Convincingly he has established that the time and space concept in relation to planets & zodiac, their symbolic representation to entire universe including human being on earth and theory of karma are integral part of Naadi astrology. He has simply fit the science in to Astrology, instead of framing Astrology as science.

This original work on Naadi astrology by Guruji is a work of magnum opus in the field of Naadi Astrology. He has used some of the principles from scholarly works for which due credits with appropriate reference is given.

Often Guruji says "by blowing trumpets on correct predictions, does not end the responsibility of Astrologer. Counselling and comforting with solutions is the ultimate karma of Astrologer". Therefore he has included his monumental research work on gem prescription and remedial measures in this present book. Apart from this, he has initiated the structured format of conventional astrology, and has introduced the expertise of Kerala system on which the next project is proposed in association with Sri Shiva Kumar and Sri Lenin Varghese. The introductory works of Sri Shiva Kumar and Sri. Lenin Varghese are appended to this book. This introductory chapter deals with the approach to conventional astrology propounded by sages adopted in Kerala state with conviction and authority on this subject. A few wonderful remedies from Kerala have been included in this book.

Experiments with tropical charts have been discussed, with Sri. U. Someswar one of the disciples of Guruji. This chapter gives us the insight into the variations in application and its effect. Sri. U. Someswar is a practicing Naadi Astrologer, having wide practical experience in chart analysis and palm reading.

Every chapter has new learning and every chart has new technique of approach for delineation. It is therefore recommended to study carefully all chapters sequentially, instead of random surfing.

We are anticipating" that the next project of our Guruji and his team, on conventional astrology will be completed soon and we also wish to be part of that project.

We are extremely thankful to "Jyotirvastu Vignana Samstha" and "Shravana Astrological Institute" who have provided the opportunity to conduct classes in Naadi Astrology.

Collectively we feel delighted having introduced this book to the readers across the world.

The Naadi system is a unique system of predictive astrology and the techniques found in different nadies are varied and different. When compared to our classical texts, this system seems to be very challenging and has deeper insight in the interpretative methodology. Prof. R.G. Rao has spent major part of his life in understanding the deeper meanings, methodologies, significance and underlying features in nadies in deciphering planetary codes, symbolisms, karakatwas and combinations as applied and found in the nadi granthas or palm leaves.

His student Sri. Satyanarayana Naik has systematically arranged the subject and also has created a clean platform for the understanding of nadi system and techniques as propounded by Prof. R.G. Rao. He, with examples has shown how graha-karakatwas and rasi-karakatwas interact with each other to produce the results. The basic ideology apart from the above is to find the relationship of planets occupying 2,5,7,9,11, and 12 houses mutually. When they have relationship mutually, they produce good and bad results depending upon the combination of planets. Some plants are destiny makers with their combinations and other may be destiny modifiers or breakers. In this connection, he has given elaborate tables to understand the intricacies and significations in blending of karakatwas.

The special features in this work are to understand the most important portfolios of the planets, in relation to human aspects of life, and the karma effect on the human being and their identification through planets. For example, in male/female and in female charts, Jupiter represents Jeevakaraka and Venus also becomes Jeevakaraka in female charts. Saturn is karma karaka and also indicates delay & laziness in both male and female charts. In this book, Jeeva and Karma group is represented by the above planets Jupiter/Venus and Saturn.

These two are aptly termed as destiny-modifiers.

Mr. Naik has introduced this grouping system and has woven the material and metaphysical concepts to interpret the effects of karma and freewill while analysing the horoscope. With the elaborate karakatwa tables given in this book, all the aspects of life like, health, ailments, blood relations, position, power, finance, foreign, travel, luxuries can be dealt in a meticulous way. The author has also provided enough examples to cover almost all the departments of life.

In this system, timing of event based on transit of planets is a wonderful concept. The author has given a detailed methods and rules to pin point the periods of fructifying events.

Gruha Vastu, Gems application, Yoga, and other remedial measures are Included in this work, which will be very useful to the readers.

I congratulate the author for having taken so much of pains in compiling this stupendous work on nadi system of astrology. I also look forward for many research-oriented works from the author in future. Lastly, I can say this is a best book for understanding the nadies and the nadi system.- 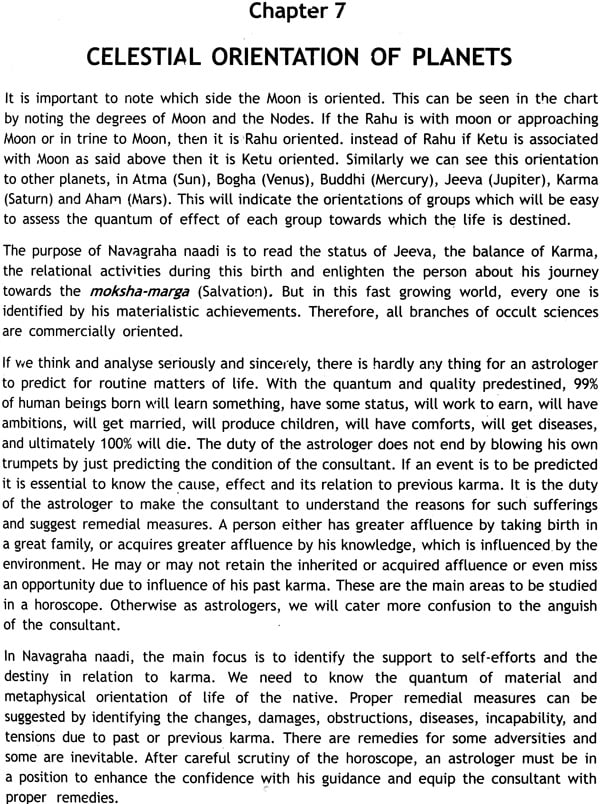 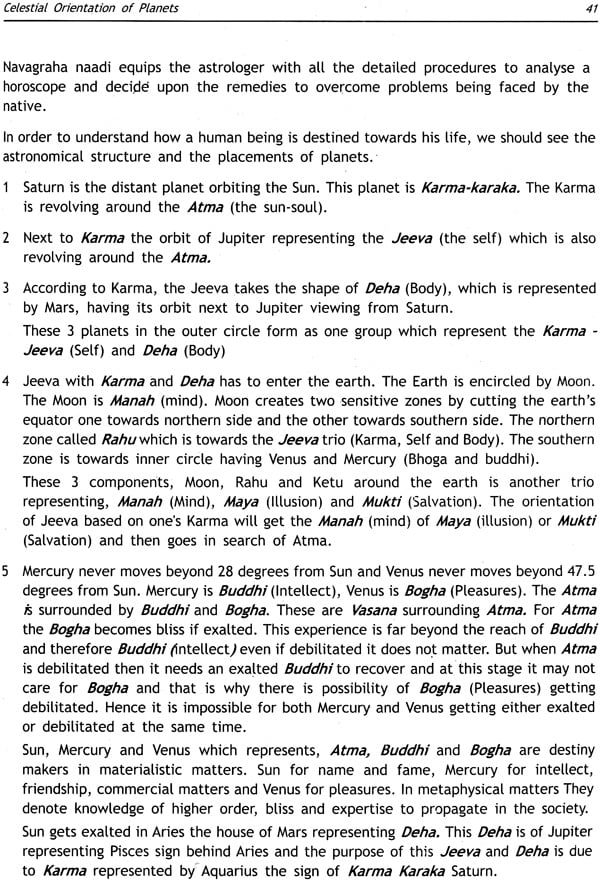 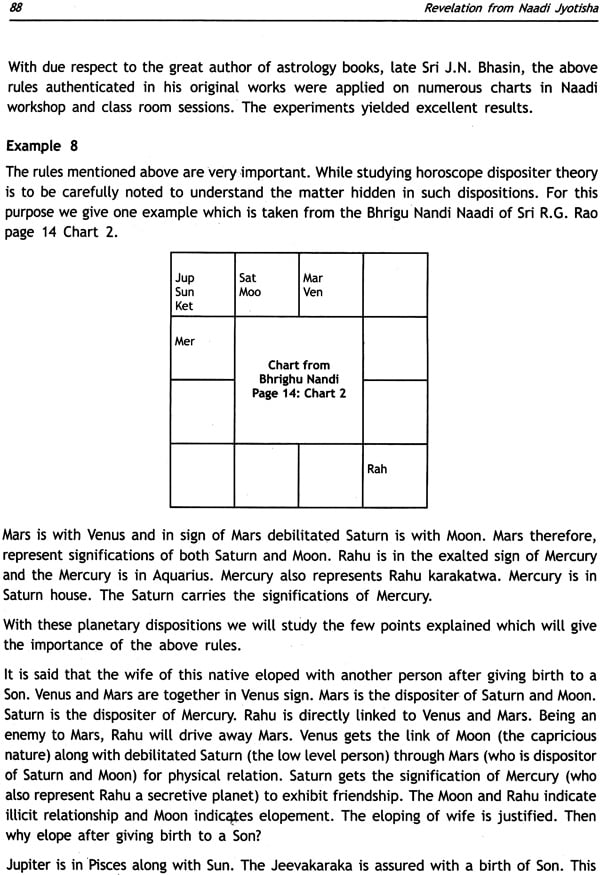 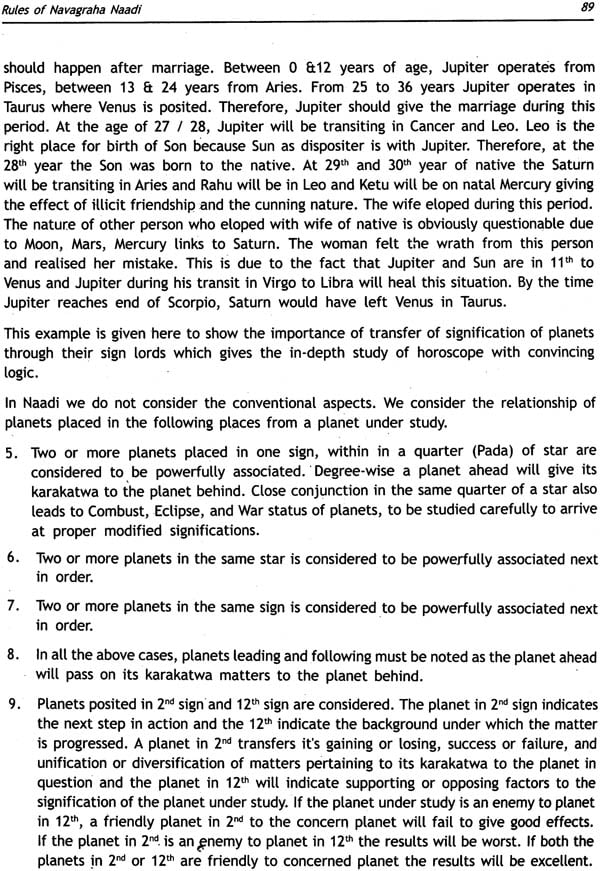 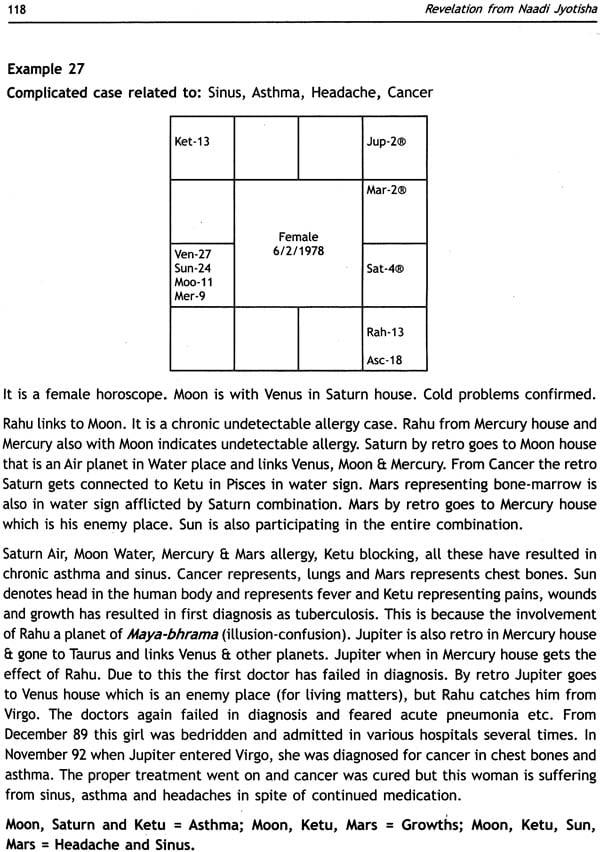 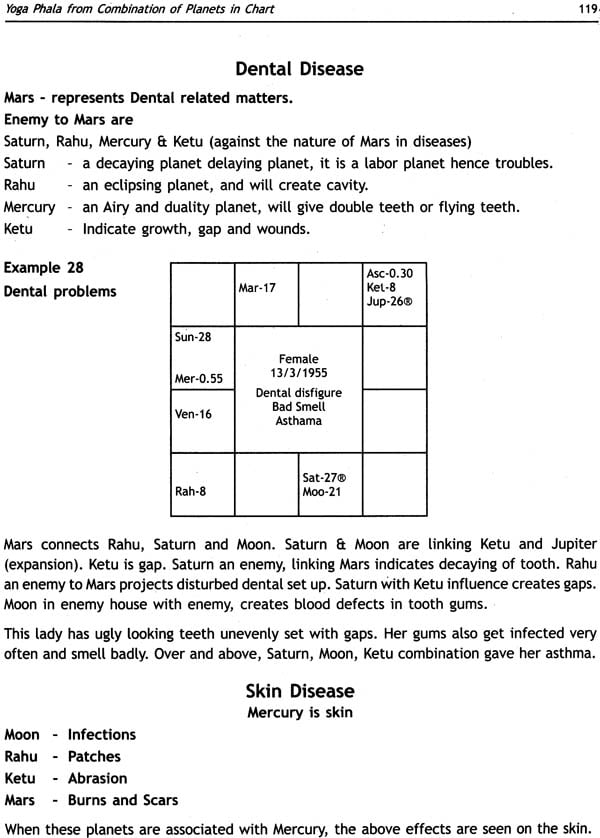 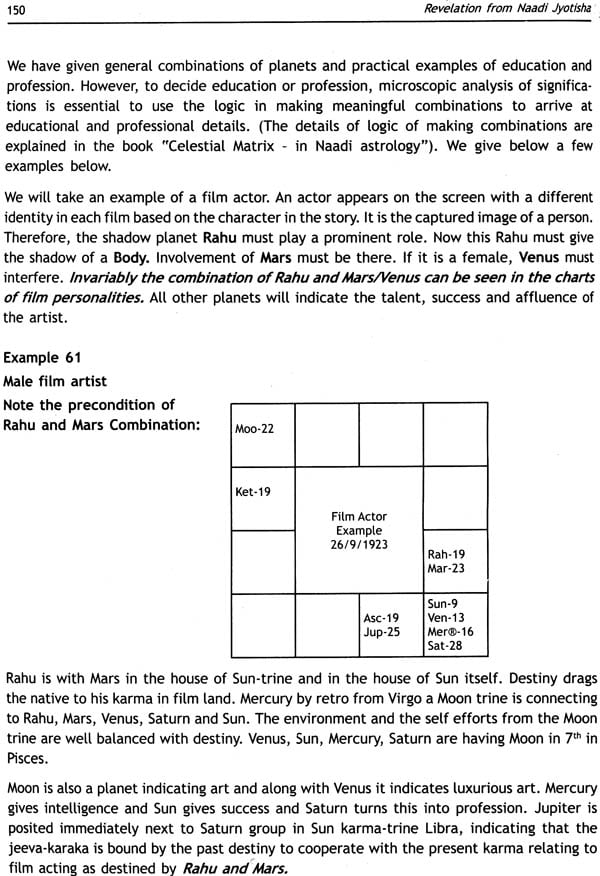 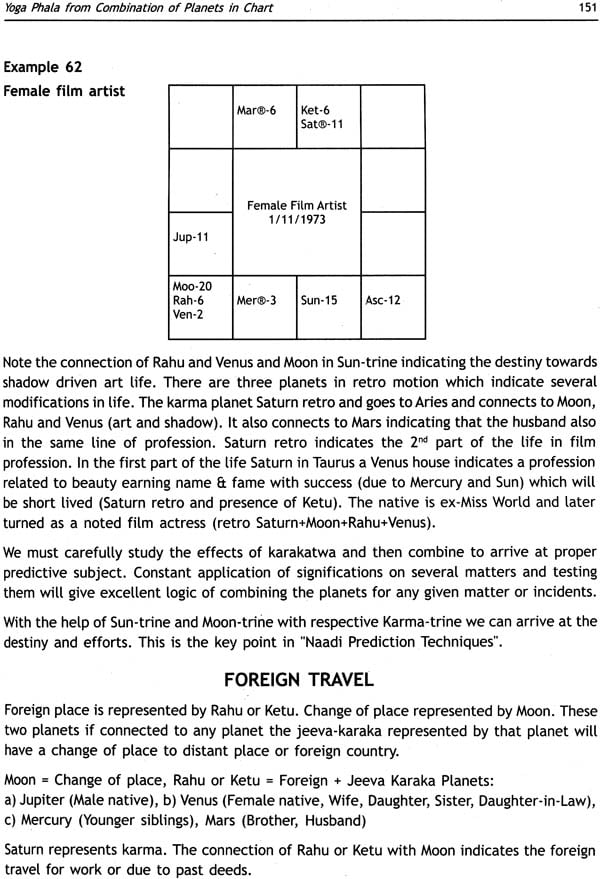 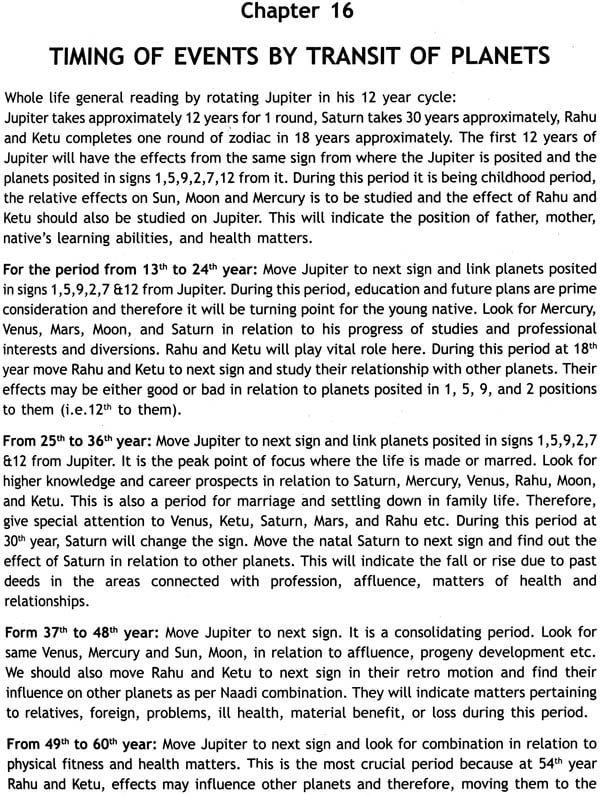 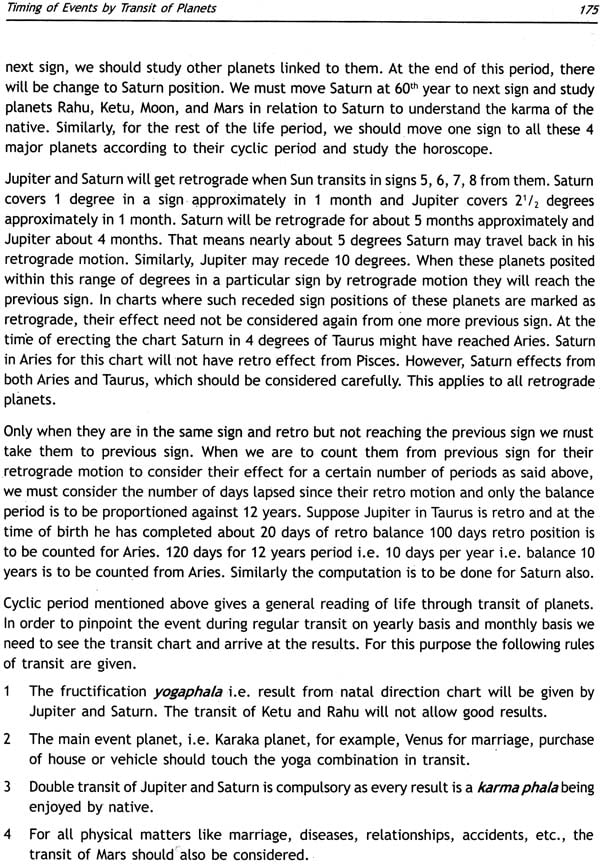 Nadi Astrology
By Chandulal S. Patel
$24
Out of Stock

Predicting Through Navamsa and Nadi Astrology
By CHANDU LAL S. PATEL
$31
Out of Stock 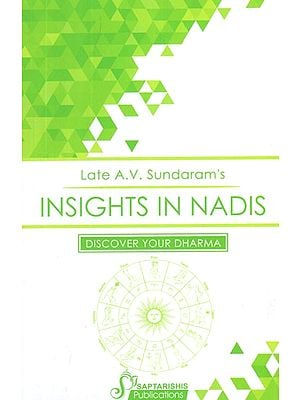 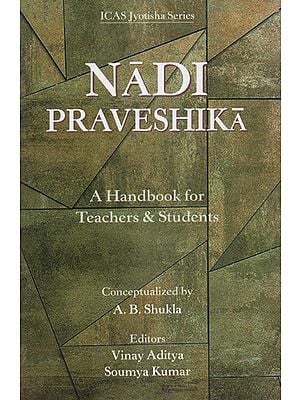 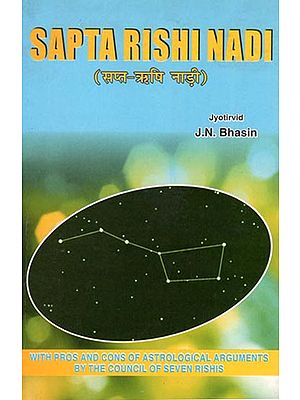