$25.00
Notify me when this item is available
Save to Wishlist Send as E-card Share by Email

Sanatana Dharma means the Eternal Religion, the Ancient Law, and it is based on the Vedas, sacred books given to men many long ages ago.

While the Sruti and the Smrti are the foundation and the walls of the Sanatana dharma, there are two other important supports like buttresses; the Puranas, and the Itihasah, History.

This book is an extract from the most important scriptures of Hindus viz., Sruti (that includes four Vedas), Smrti (that includes institutions of Manu, Yajnavalkya, Parasara, Vasistha, Vyasa, Gautama, Atri etc.), Puranas (eighteen in numbers) and Itihasa (that includes two great epics Ramayana and Mahabharata).

This book was first published in 1904 by Board of Trustees of Central Hindu College, Benares with an aim to constitute the Principles on which religious and moral teaching is to be given in all institutions. It contain the fundamental ideal and doctrines which are generally received as orthodox, but does not enter into the details as to which sectarian divisions have arisen.

This book may prove useful in laying a firm foundation of right thinking in the minds of Hindu youths, and may help in shaping them into pious, moral, loyal and useful citizens of their Motherland and of the Empire, is the prayer with which its compilers send it fourth to the world.

The present edition is the revised version of the earlier edition that was first published in 1904. the editor of the present book has corrected various diacritical notations according to the modern usages. Further, he has improved the edition by replacing old-usage of English words such as thee, thy, thou etc. with their corresponding modern English equivalents.

The Board of Trustees of the Central Hindu College has laid down the following principles on which religious and moral teaching is to be given in all institutions under its control.

The object of the Central Hindu College being to combine Hindu religious and ethical training with the western education suited to the needs of the time, it is necessary that this religious and ethical training shall be of a wide, liberal and unsectarian character, while at the same time it shall be definitely and distinctively Hindu. It must be inclusive enough to unite the most divergent forms of Hindu thought, but exclusive enough to leave outside it forms of thought which are non-Hindu. It must avoid all doctrines which are the subject of controversy between school recognised as orthodox; it must not enter into any of the social and political questions of the day; but it must lay a solid foundation of religion and ethics on which the student may build, in his manhood, the more specialised principles suited to his intellectual and emotional temperament. It must be directed to the building up of a character- pious, dutiful, strong, self-reliant, upright, righteous, gentle and well-balanced- a character which will be that of a good man and a good citizen; the fundamental principles of religion, governing the general view of life and of life's obligations, are alone sufficient to form such a character. That which unites Hindus in a common faith must be clearly and simply taught; all that divides them must be ignored. Lastly, care must be taken to cultivate a wide spirit of tolerance, which not only respects the differences of thought and practice among Hindus, but which also respects the differences of religion among non-Hindus, regarding all faiths with reverence, as roads whereby men approach the Supreme.

1. The religious and ethical instruction must be such as all Hindus scan accept. 2. It must include the special teachings which mark out Hinduism from other religions.

3. It must not include the distinctive views of any special school or sect.

This elementary Text-Book, written in accordance with this scheme, is intended for the use of Hindu boys in the middle and upper sections of the High Schools of India, and is designed to give them a general but correct idea of their national religion, such as may be filled in by fuller study in College and in later life, but will not need to be changed in any essential respect.

It contain the fundamental ideal and doctrines which are generally received as orthodox, but does not enter into the details as to which sectarian divisions have arisen. It is believed that while a sectarian parent or teacher will probably make additions to it, he will not find in it anything which he will wish positively to repudiate.

While the book may be placed in the hands of the boys for their own study, it is intended to be simplified by the oral explanations of the teacher, and each chapter serves as an outline on which one or more lessons may be based.

The slokas given at the end of the chapters should be committed to memory by the boys. They will thus acquire a useful store of sacred authorities on their religion.

The name of this series, Sanatana Dharma, was chosen after full discussion, as best representing the idea of the fundamental truths presented. It has become somewhat of a sectarian name in some parts of India, but it is here taken only as meaning the eternal religion.

That this book may prove useful in laying a firm foundation of right thinking in the minds of Hindu youths, and may help in shaping them into pious, moral, loyal and useful citizens of their Motherland and of the Empire, is the prayer with which its compilers send it forth to the world. 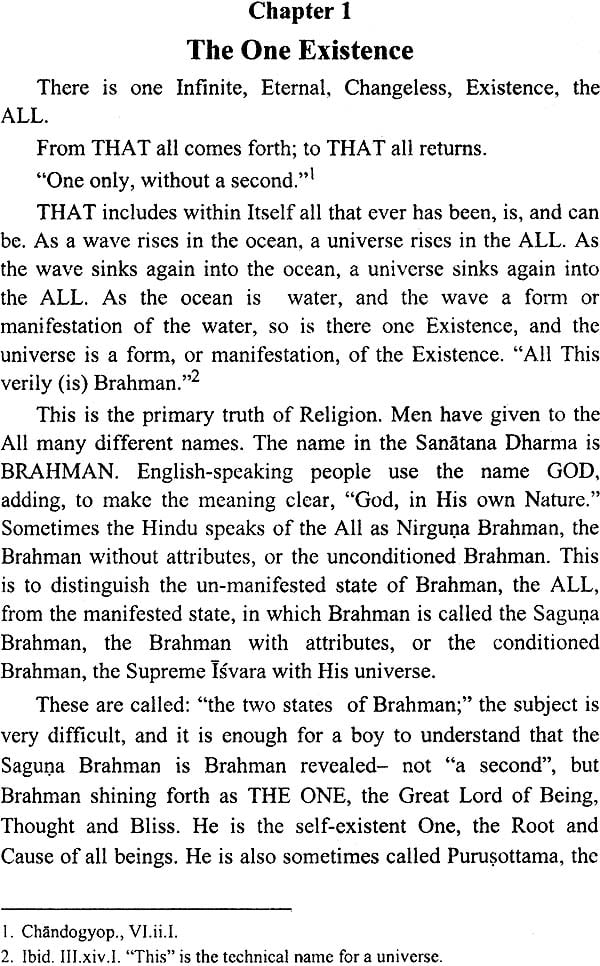 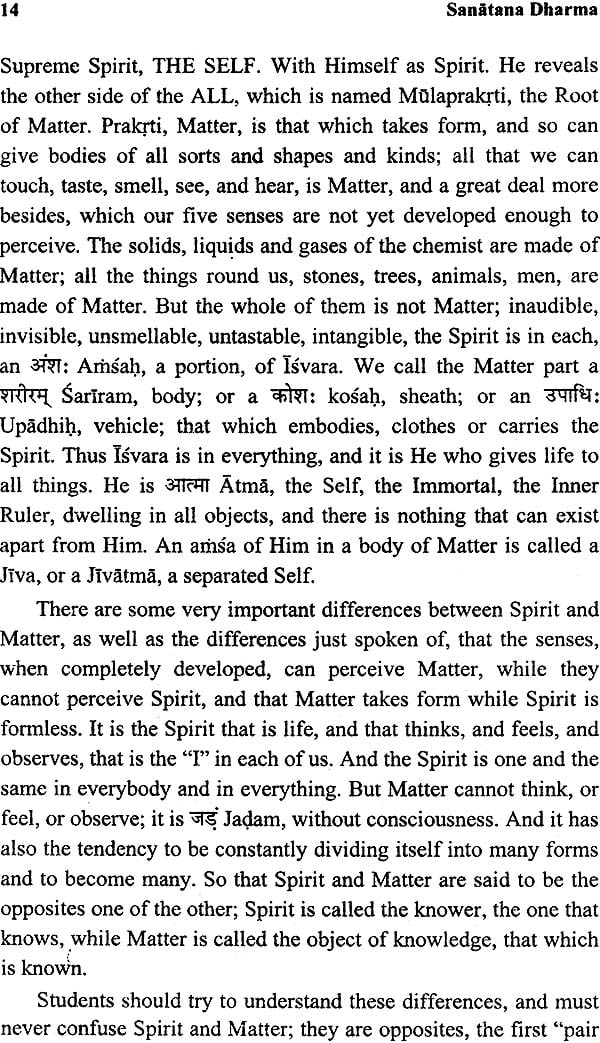 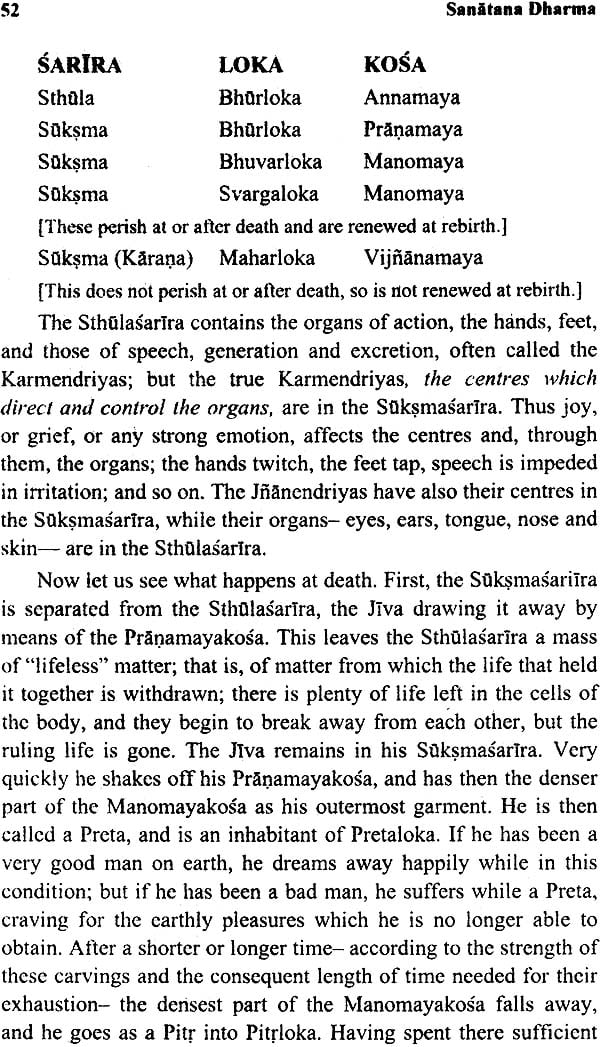 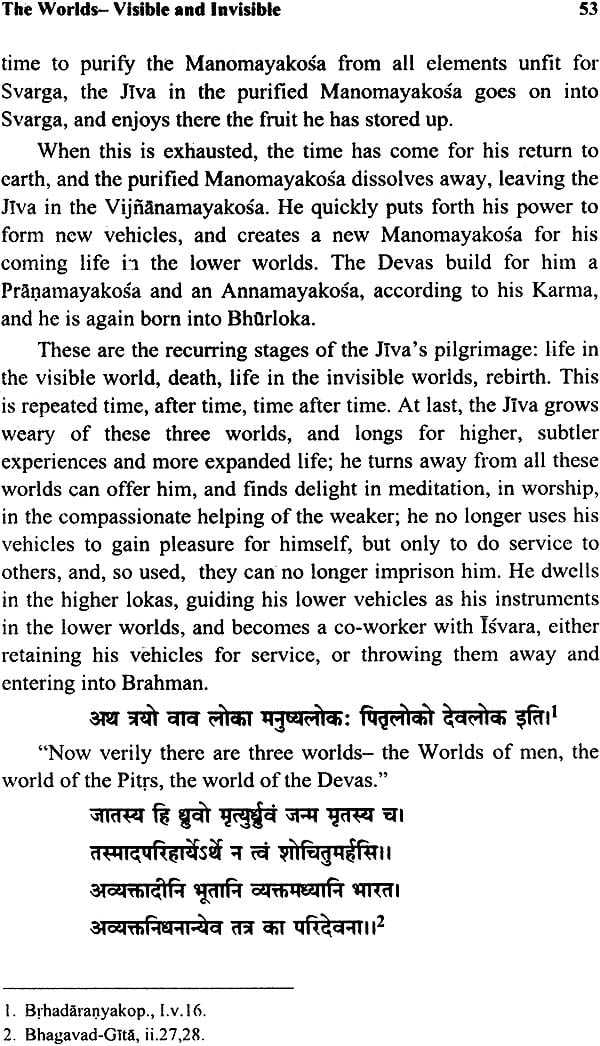 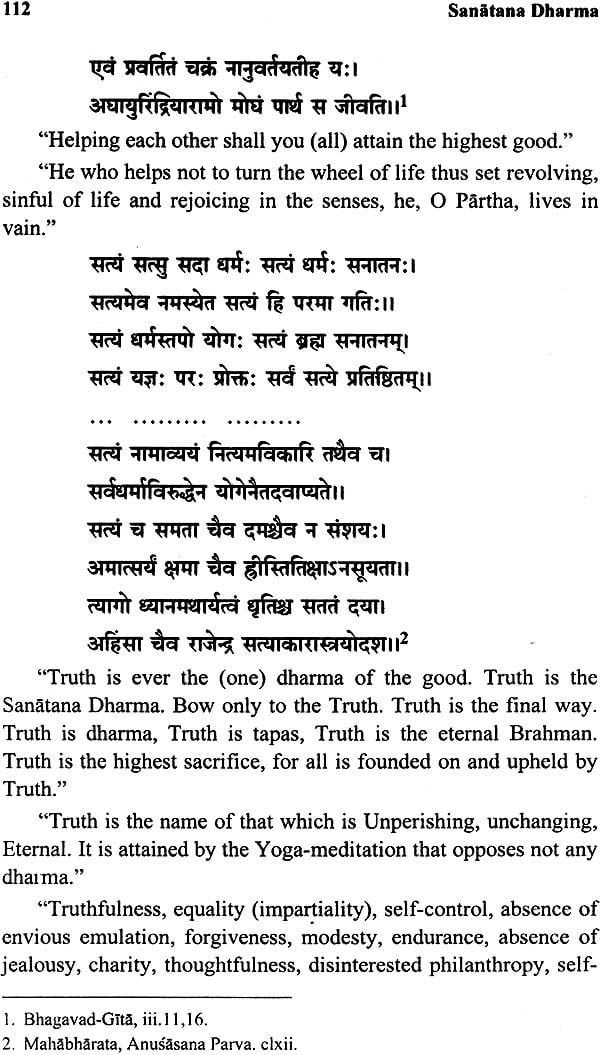 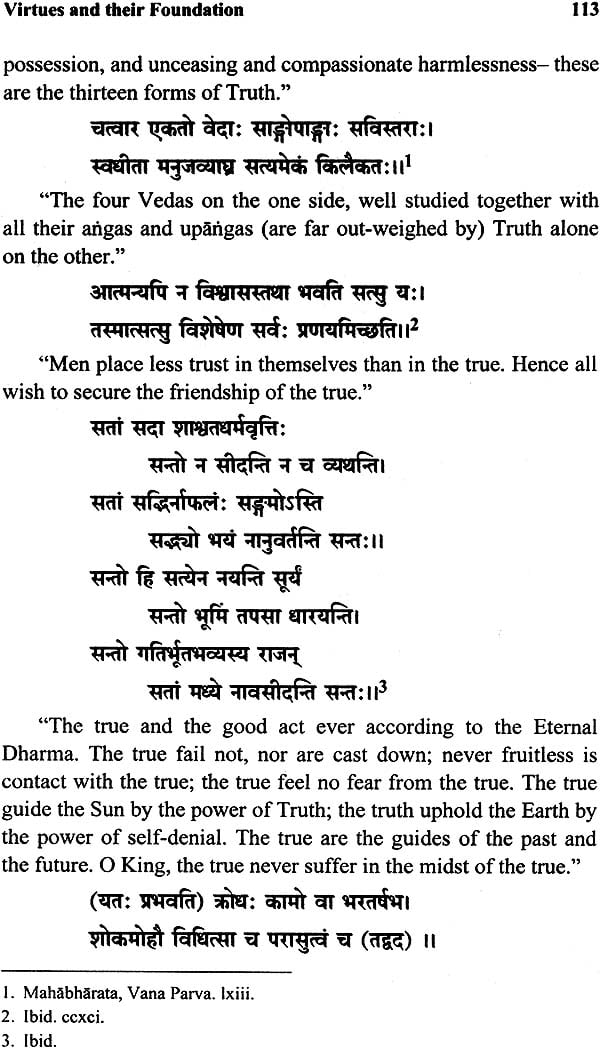 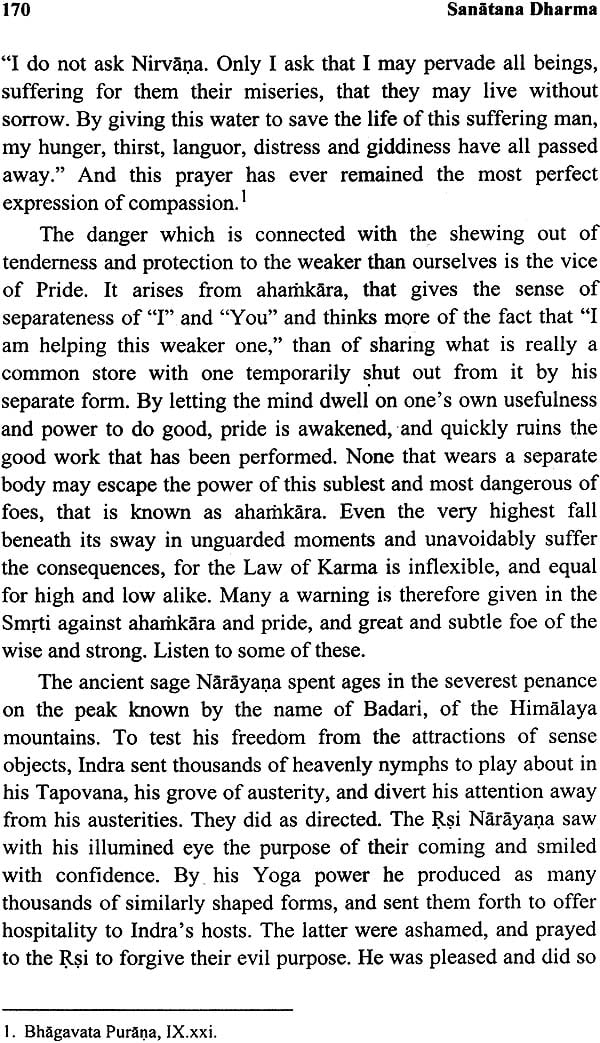 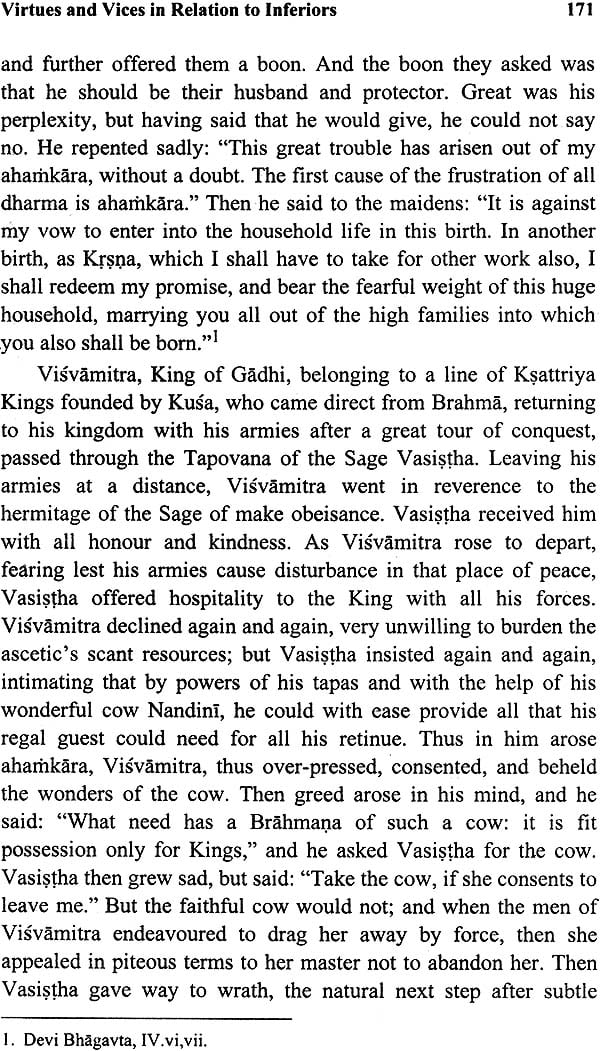 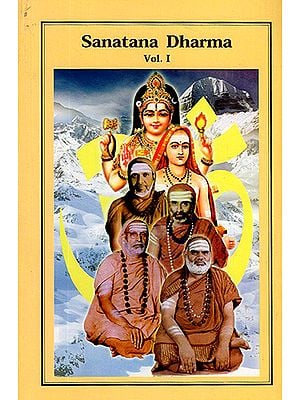 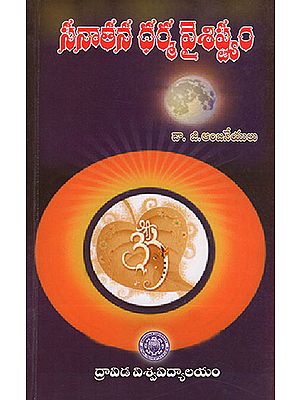 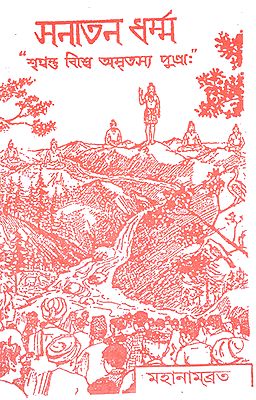 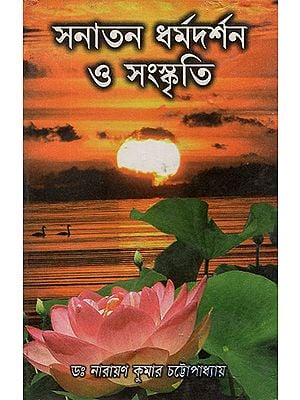 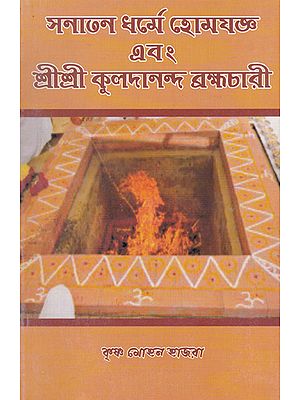 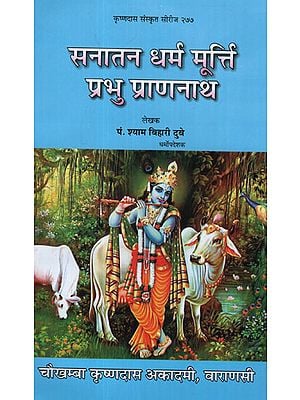 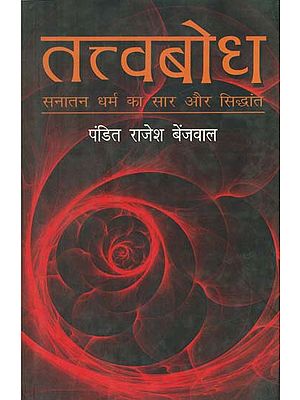 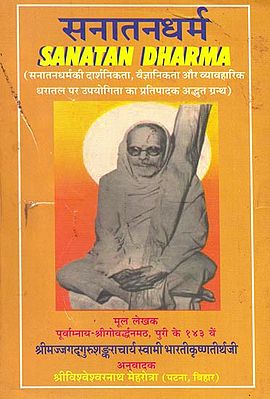 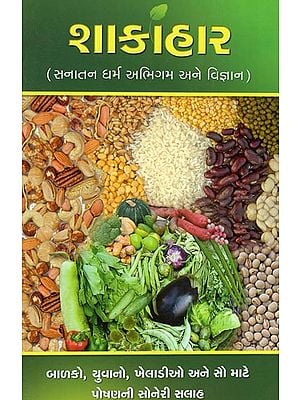 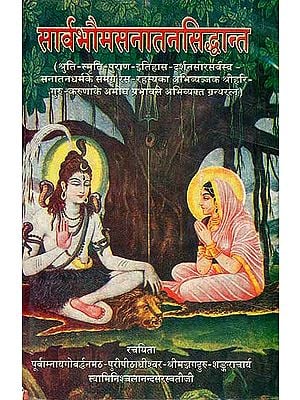 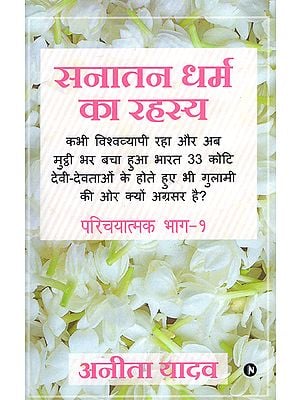 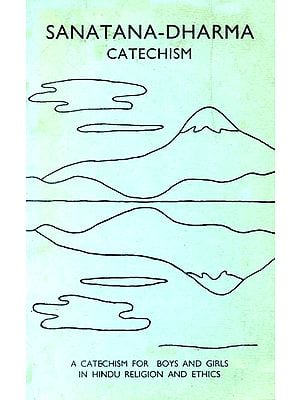 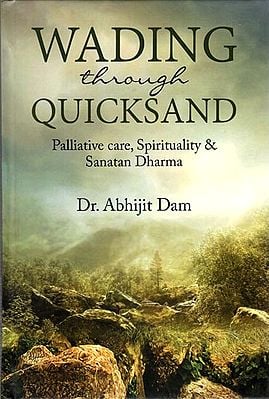