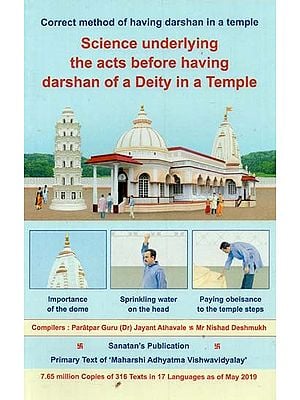 23 years in business
Introduction to the Compilers


4. Propounder of `Gurukrupayoga' for faster God-realisation: By performing spiritual practice as per `Gurukrupayoga', 99 seekers have become Saints and 1,249 seekers are progressing towards Sainthood as of 31.5.2019


5. Unique creation and publication of Spiritual texts on various topics such as spiritual practice, protecting the Nation, bringing about awakening on Dharma (Details are provided in this Text)


6. Production of Audio CDs & VCDs that provide guidance on spiritual practice and education on Hindu Dharma


8. Research on spiritual remedies for physical, psychological distress and that caused by negative energies


9. Conducting research on the Divine changes in His own body, the objects used by Him and His own Mahamrutyuyoga


11. Research using scientific instruments on religious rituals and events that are beyond the comprehension of the intellect


14. Study of animals and plants from perspective of sattvikata


15. Research through Astrology and Nadijyotish


18. Missions that have commenced taking inspiration from Him


A. Hindu Janajagruti Samiti for establishing the 'Hindu Rashtra'


B. Hindu Vidhidnya Parishad - An organisation of advocates

Mr Nishad Deshmukh began his spiritual practice at the age of 13 (in May 2001) under the guidance of Sanatan Sanstha. He is a Commerce graduate. In July 2005, he started receiving Divine knowledge. This has been included in Sanatan's Texts.

The temple is an abode of God, meaning, it embodies the actual existence of God. By going to a temple our wishes are accepted by God and we experience mental peace. It is with this faith that devotees visit a temple. It is said that God yearns for bhav. It does not matter in which way the devotee (who has bhav) has darshan, he will still experience God's grace. However, an ordinary devotee does not have enough and hence, it is imperative that he has darshan of the Deity in a spiritually correct manner.

When a lamp is lit, soot collects on the glass encasing it. Only when this soot is cleaned, does the bright light of the lamp spread all around. Likewise, before the actual darshan of the Deity, the soot-like covering of Raja-Tama components around the individual has to be eliminated and bhav awakened within, so as to fully avail of the benefit of Chaitanya and grace of the Deity. Information on how this can be achieved through the spiritually correct method of having darshan of Deity, is given in this Spiritual text. Not only are the correct acts described, but the related subtle-level spiritual science too is mentioned. This will help devotees develop faith in the acts to be performed before having darshan of the Deity, and simultaneously, their faith in the Scriptures will grow as well.

Answers to various questions are based on spiritual science. Questions such as why should we enter a temple only after washing our feet, how should we pray while having darshan of the Deity, why and how should pradakshinabe performed around the Deity and for how many times, etc., are provided in this Spiritual text.

If by reading this Spiritual text, an individual has darshan of a Deity according to spiritual science, and if in turn he creates awareness about this amongst people, it will be the true accomplishment of this Spiritual text. We pray at the Holy feet of Shri Guru that this may happen. - Compilers 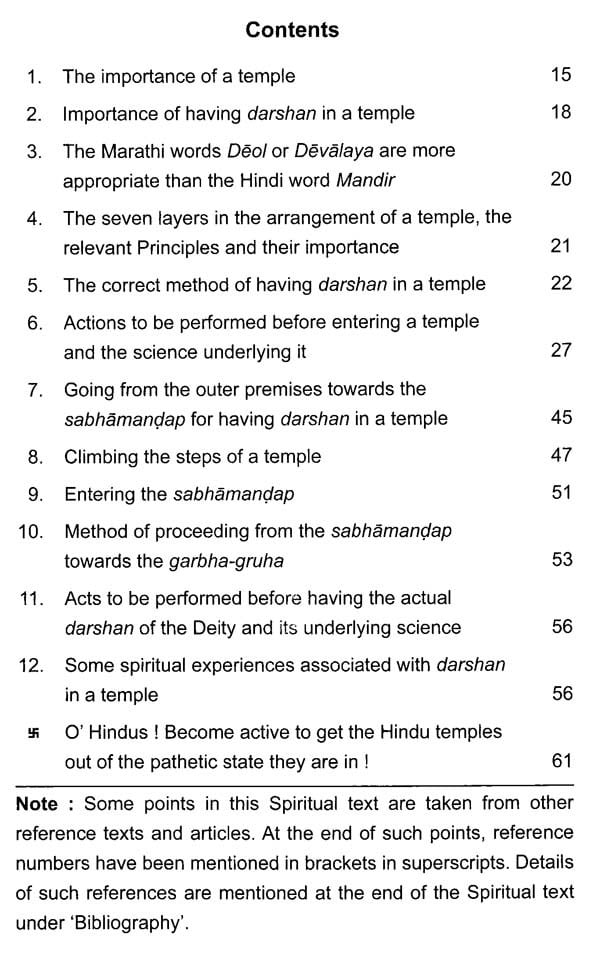 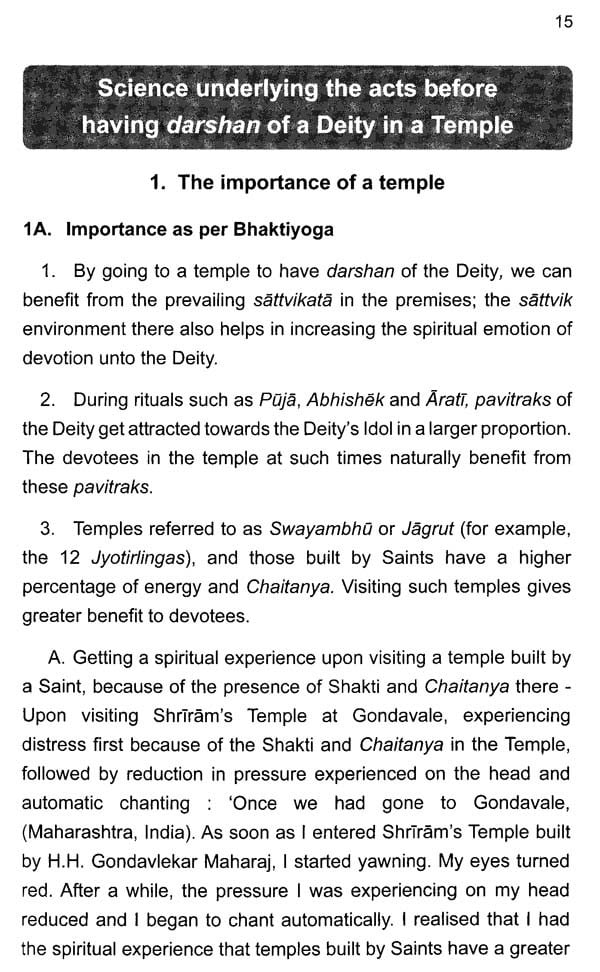 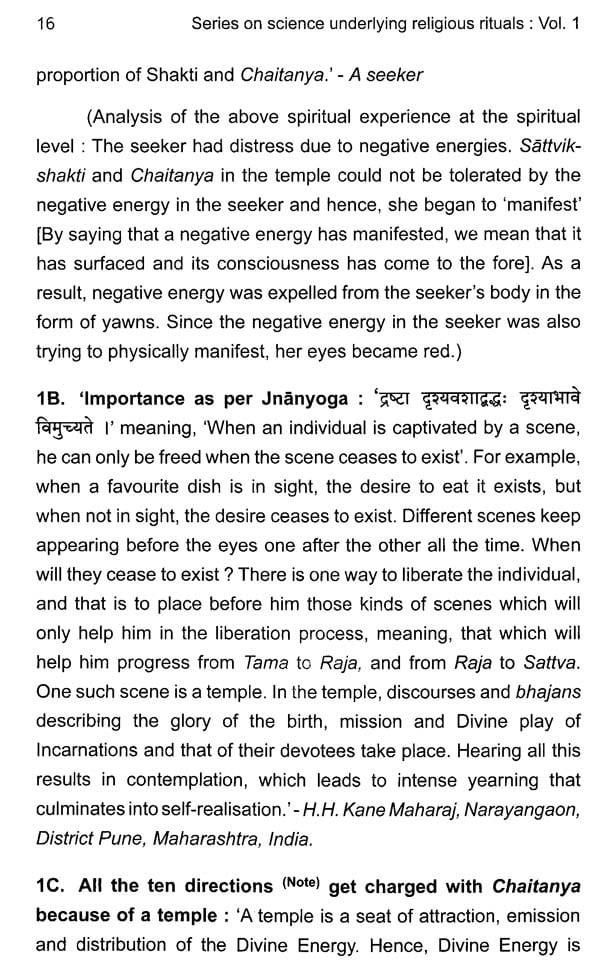 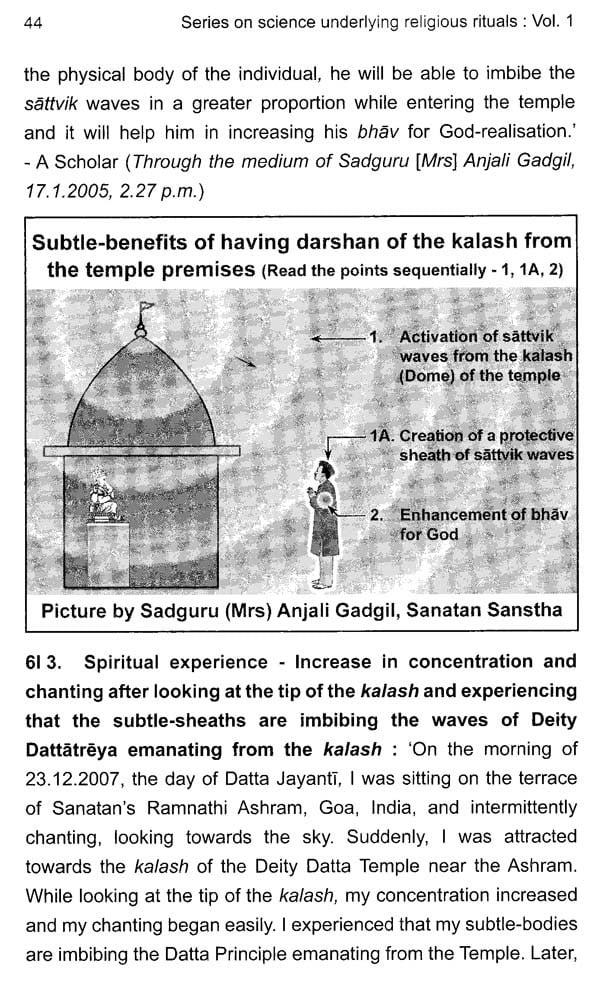 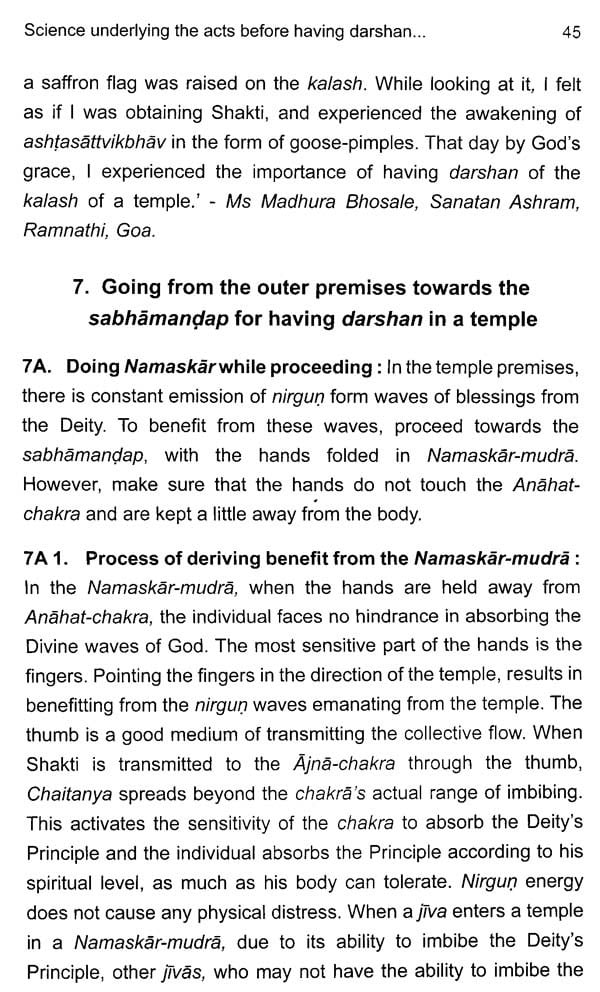